Every Child, Every Day 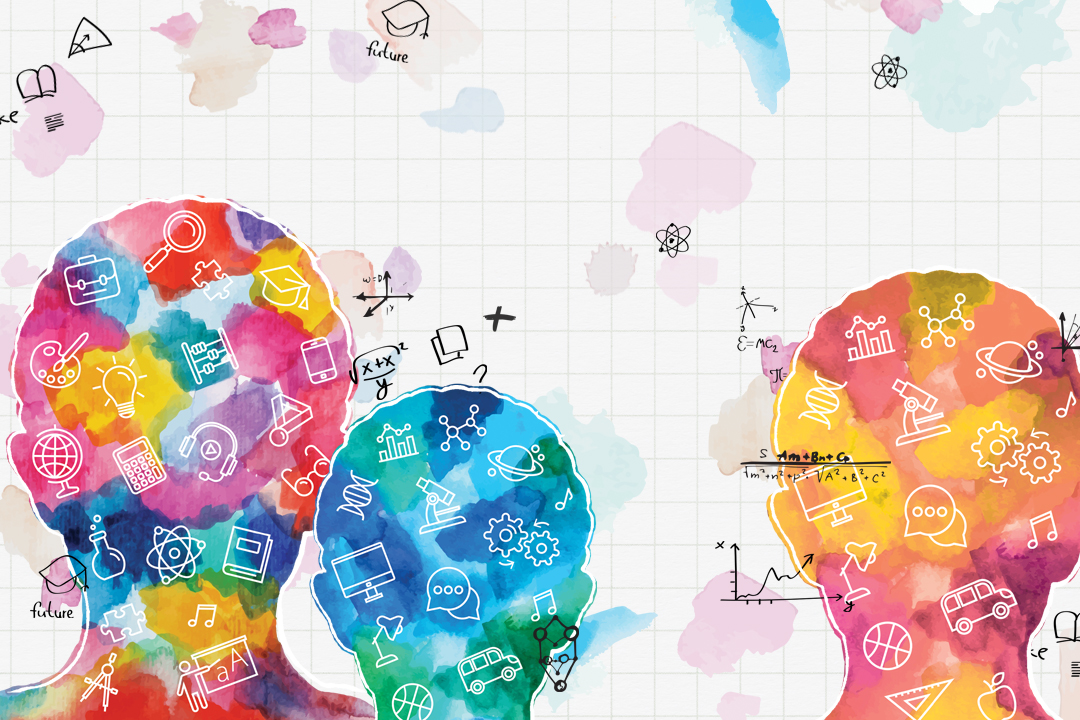 As a little boy, Aaron Triplett labored in school, but he always loved music. “Aaron struggled with anxiety,” explains his mother, Jannie Nelson. The condition made it difficult for him in class or at least most classes.

For Triplett, music was his refuge, and few understood that better than Cheryl Dyson, the principal at Strathmore Elementary School in Silver Spring, where he attended. When it was suggested that Triplett forgo music class in favor of working on academic subjects, Dyson disagreed. 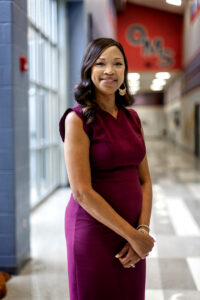 “She always saw potential in me,” says Triplett, who went on to attend college, becoming a multitalented professional artist—saxophonist, vocalist, songwriter and choreographer—who performs under the stage name Exie J. at venues like the Kennedy Center and Washington National Cathedral.

This past July, Triplett’s advocate took the helm as the first African American superintendent for Frederick County Public Schools following two decades with the Montgomery County school system, where Dyson moved from teacher to principal to associate superintendent. She brings with her to FCPS the motto of “every child, every day.”

“She believes in this idea of finding the spark in a child, whatever it may be, and cultivating and nurturing that and then helping that child use that spark to have an impact on their life and their life’s path,” says Sarah Sirgo, whose career working with Dyson continues as chief of staff at FCPS.

Of course, Dyson is coming into her newest role at a challenging time when the educational system in the United States is under great stress—from school shootings to teacher shortages. FCPS has been dealing with its own issues, such as a U.S. Department of Justice investigation of special needs procedures to parents protesting state health curriculum updates which include new language on sexual orientation and gender identity.

With such issues as the federal investigation, “I have to rebuild trust,” says Dyson. “The DOJ report kind of put a black eye on things between the school system and the community. This institution needs healing. And we’re going to do that. We’re going to be transparent and honest.” 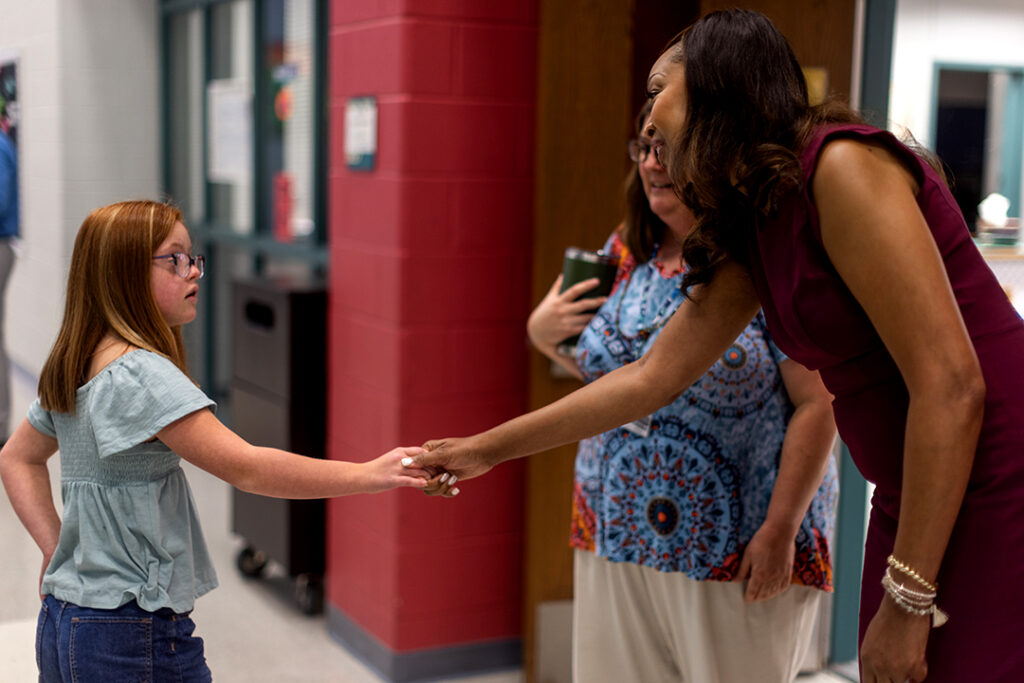 Long before her career would lead her to the helm of FCPS, Dyson was a little girl in Prince George’s County who loved to play school. Her older brothers, while adoring their little sister, were not interested in becoming her make-believe students, she says with a smile. Her girl cousins, on the other hand, were more up for the challenge. “When my cousins from Pittsburgh would come to visit, I would get all set up,” says Dyson.

Growing up in Upper Marlboro, “Cheryl was very inquisitive and intelligent and did a lot of reading,” recalls her father, LeRoy McDuffie Sr.

In an already-close family, she was especially tight with her mother, who passed away early this year. The two would often watch television together, even as adults while on the phone with each other. “We loved anytime a gospel singer did a special and we liked to watch Law and Order,” she says. “I miss her.”

“She believes in this idea of finding the spark in a child, whatever it may be, and cultivating and nurturing that and then helping that child use that spark to have an impact on their life and their life’s path.” – Sarah Sirgo

Her mother wasn’t the only strong influence in her life. The young girl who would go on to become an accomplished educator had influential teachers of her own. Those like Cheryl Riggins who taught English at Frederick Douglass High School and was “my mentor,” says Dyson. “I was so hurt when she left to be a principal. I just loved her.”

Riggins remembers Dyson too. “She was such a delightful student who was very focused and very much respected by others,” says Riggins. “She was, most of all, an academically advanced student. I am proud to see her move into this leadership position.”

From teachers like Riggins, Dyson learned early on the importance of connecting with students and the impact it can have on a young life. “I remember, one Christmas [Riggins] came by my house and brought me a gift,” says Dyson. “It was just everything to me.”

But as she prepared to enter college and begin the journey of her professional life, Dyson was not considering a career in education. Tall and attractive and a natural communicator, Dyson, who sometimes modeled, was drawn to the idea of working as a television reporter. As a student at Towson University, she majored in communication studies and graduated in 1993. However, during that time she decided that television work was not for her. “It seemed more about how I looked than what I knew,” she says.

“I wanted to be a principal”

So, she made a change—one that would affect countless young lives in the process. Dyson went on to earn a master’s degree in curriculum and instruction at the University of Maryland at College Park and teach fifth grade at Georgian Forest Elementary School in Silver Spring. She set her sights high early on. 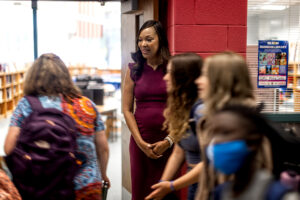 She then became a staff development teacher at Burtonsville Elementary. “I was responsible for training new teachers and supporting them, and then also responsible for any new curriculum rollout, the school improvement plan.” “I worked with the principal on data analysis, interventions, our night programs that we had for our parents. All of those things. I did that for two years and it was such a great bridge going from the classroom to this quasi-administrative role.”

She moved even closer to her goal in 2005 when she was named assistant principal at Maryvale Elementary School in Rockville. Edward Newsome, principal at the time, knew she was something special. “I told her from the very start,” he says, “‘You are going to the top.’ And I have enjoyed watching her journey getting there.”

Newsome recalls Dyson embracing her task with great heart and dedication, such as her involvement in engaging the school’s Hispanic parents. “The parents had a lot of respect for the school, but they were not really involved,” Newsome says. “So, we had a strategy that Cheryl helped develop and we called it the Hispanic Parents Night. We started with about 20 or 30 but ended with up to 100 parents every month. Cheryl took leadership on that.”

On those nights, says Newsome, Dyson would stay late. “And she had an hour-and-a-half drive,” he says. “And a family at the time. So, that said something about her commitment, dedication and loyalty to the purpose.”

Dyson finally reached her goal of principal at Strathmore Elementary School in 2009. “My first love,” she says. “Strathmore was the place where I really learned to vision.”

And that vision began on her first days of leading the Silver Spring school as she met with teachers and staff. “It was when I wanted to give my spiel,” she recalls. “Who am I? What can you expect to see in me? I talked about my core values—relationships, equity, excellence. And I said, ‘This is how you can expect to see each one of them in me every day. And if you don’t, check me on that.’”

She then asked for their input. “I gave them a little sheet of paper with a brain bubble,” she says. “And I said, ‘What do you dream for your school?’ So, everybody got to write down what they dreamed.” That exercise was extended to students and even parents as a way to build community and the idea of “one dream, one team, results for every student,” says Dyson.

Dyson wasn’t just out to create a vision, but in many ways a movement. In fact, on “back-to-school night, we had around our hallways dream bubbles, where all the kids had written what they dreamed for their school,” says Dyson. “Things like, ‘I want to be safe’ or ‘I want respect.’”

By connecting and working together, a school vision was created and placed on posters and T-shirts worn by teachers, staff and students: Strathmore is a safe place where we show respect for all, challenge our minds and experience success. Students recited it at the start of their school day.

“When students would misbehave or get into trouble, I would say, ‘What part of this vision are you violating now?’” says Dyson. “‘Who do we say we were going to be?’ It was powerful, just powerful.”

And it remains at Strathmore, even though Dyson has been gone from the school for several years. “I can go right back to that school, or I can see people, parents in the store, and everyone remembers,” she says. “’Who are we?’ And they’re still trying to achieve all of those components. That’s still the mission to this day.” 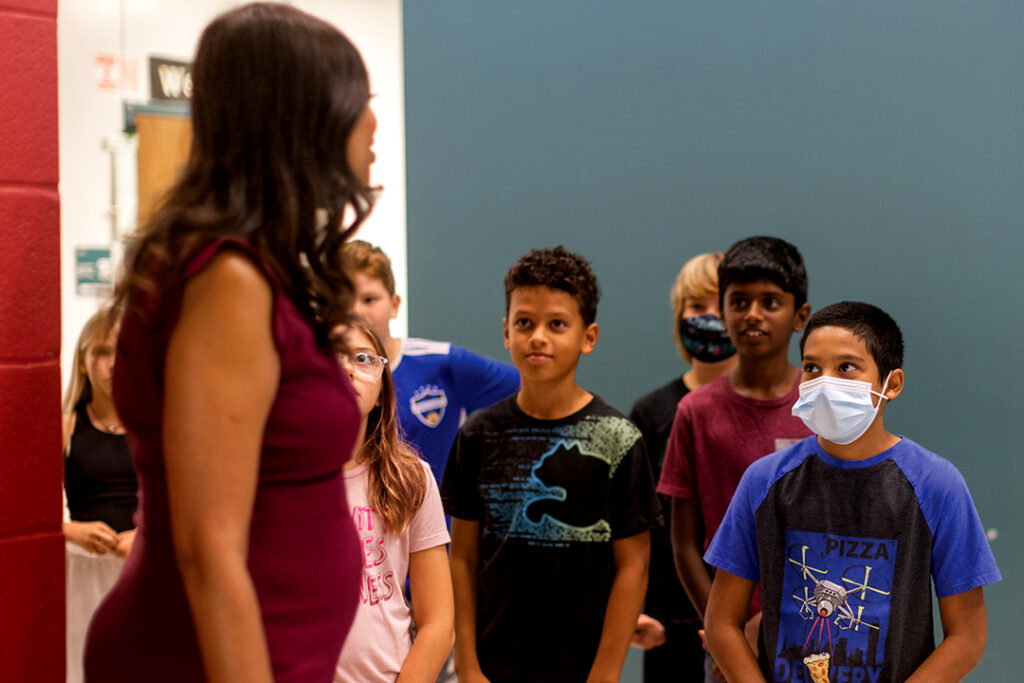 “Walking a rock star through the halls”

From Strathmore, Dyson continued to climb the administrative ladder in Montgomery County. She became director of family and community engagement, director of school support and improvement, and finally area associate superintendent supervising and supporting 70 schools and 45,000 students.

The Frederick County Board of Education saw many of the qualities Dyson had spent more than two decades building when she interviewed to be superintendent, says Brad W. Young, former board president.

“Dr. Dyson just really connected with the board with her mantra of ‘every child, every day’ and her energy and her passion,” he says. “We thought that she would be a great leader for FCPS moving forward.”

In the months following her appointment as FCPS superintendent, Dyson went on a meet-and-greet tour in the county, often accompanied by Young. “I’ve taken her to various functions and to various schools, to Rotary, to July 4th and the park, and just been extremely impressed with her ability to connect and make people feel really good about her,” says Young.

Especially students. “I felt like I was walking a rock star through the halls,” he says. “Kids were just coming up and fawning over her. They were so infatuated that she was the new superintendent. You could see the connection that they felt and the energy that she brought.”

Dyson says she has been likewise impressed with the Frederick community, which is hardly new to her. Last year she attended Hood College where she received her doctorate in organizational leadership. “This place is really like a family,” she says. “And [residents] care deeply about Frederick County and have embraced their schools.”

As she prepares to continue to impact the lives of future students, she can take great satisfaction in looking back at the lives of students who thrived under her direction.

For example, at her going-away party put on by the Montgomery County school system, there was a special guest who performed for her. Aaron Triplett had come to wish his former principal good luck in her next endeavor. She was delighted to see him. 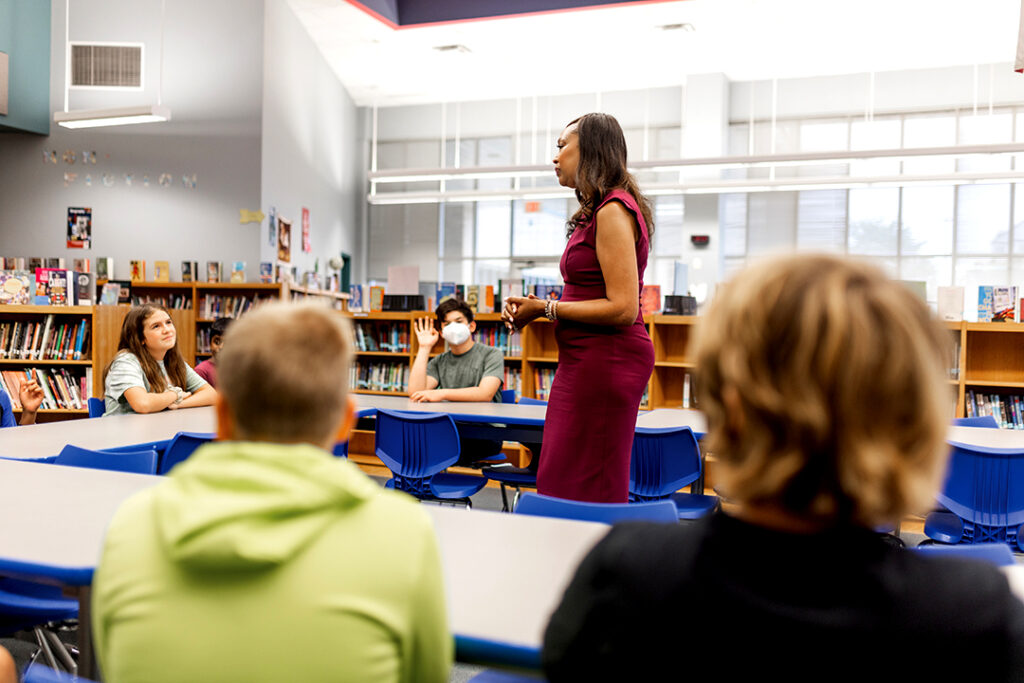