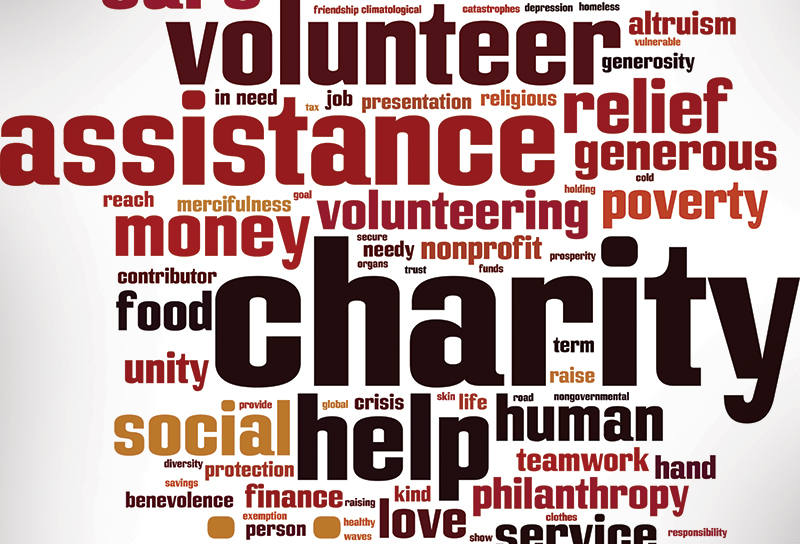 For two decades, the Community Foundation of Frederick County has honored long-standing volunteerism in the community through its unique pay-it-forward-style Wertheimer Fellow Awards that honor three recipients.

“We look for folks who have not received a lot of recognition but have done really meaningful work within their communities,” says Elizabeth Y. Day, president and CEO of the Community Foundation. “This year’s awardees have that long track record of community service working with multiple groups and keeping an eye on impact for all people.”

Since 2002, her organization has awarded $25,000 each to two adult winners, who then use the money to create a new charitable fund or add to an existing one that supports a cause of their choice. A decade ago, the foundation added a youth category, awarding $2,000 annually to use in the same manner as the adult awards.

The awards are funded by the estate of the late Janis Miller Wertheimer, a well-known local businesswoman and community volunteer. A selection committee gathers annually to consider nominations for the awards.

In addition to supporting local charitable causes, the awards can also serve a greater purpose, Day says. “I also hope that these awards are a catalyst for others to get involved in community service. I personally think there is no greater fulfilling activity than doing work that benefits so many others within our community,” she says. 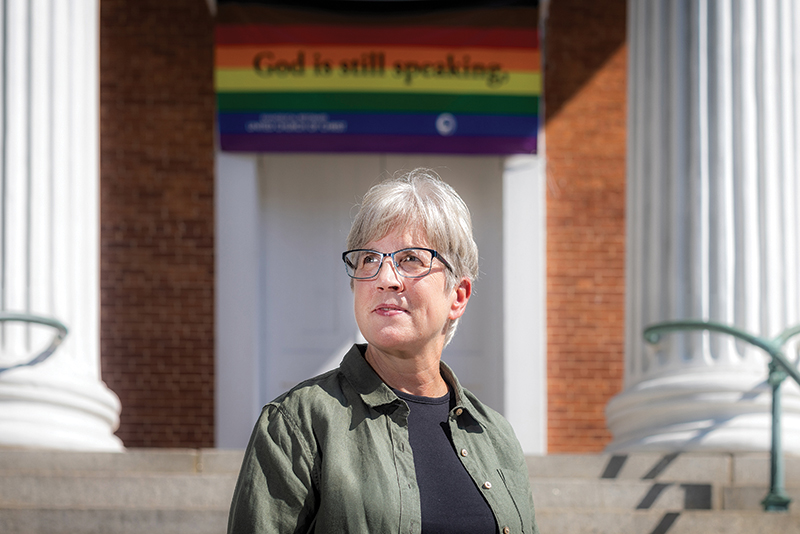 Growing up in the church, service was always a part of the Rev. Barbara Kershner Daniel’s life. She can recall when she was very young, going with her father to deliver food to some families who lived in an underprivileged neighborhood. The devotion to giving back has followed her since.

When looking at her considerable volunteer efforts throughout Frederick County, Kershner Daniel’s values reflect understanding where the need is and offering to help. As the pastor of the Evangelical Reformed United Church of Christ since 2006, she sees many needs, including food, housing and medical support.

“As the leader of a faith community, I am drawn immediately to the [volunteer efforts] that are faith-based because that is a way that our church can be involved and I can be involved as a leader,” she says. Her other volunteer groups, including the Rotary Club of Carroll Creek, are nonprofits that share her values for peace, justice and caring for neighbors.

Kershner Daniel has given extensive time over the years to the Religious Coalition for Emergency Human Needs, serving on its board and capital campaign committee that raised money to open a family shelter earlier this year. For more than a decade, she served as the coordinator for the school supply drive known as Stuff the Bus.

She most enjoys seeing the interaction of people who care about a project and how, by bringing a diversity of people’s gifts and skills and ages together, people can have a real impact. “I think it is really important that we all see what the needs are,” she says. “If we are not volunteering in the community we can live in a little bubble and not recognize everything that is going on.”

Kershner Daniel is donating her Wertheimer toward her church’s community service fund at the Community Foundation. “Our church each year has several thousand dollars that we can choose for a new project or [help] an existing organization that we support,” she says. “… It will give people in the future some flexibility to choose a need that nobody anticipated necessarily.” 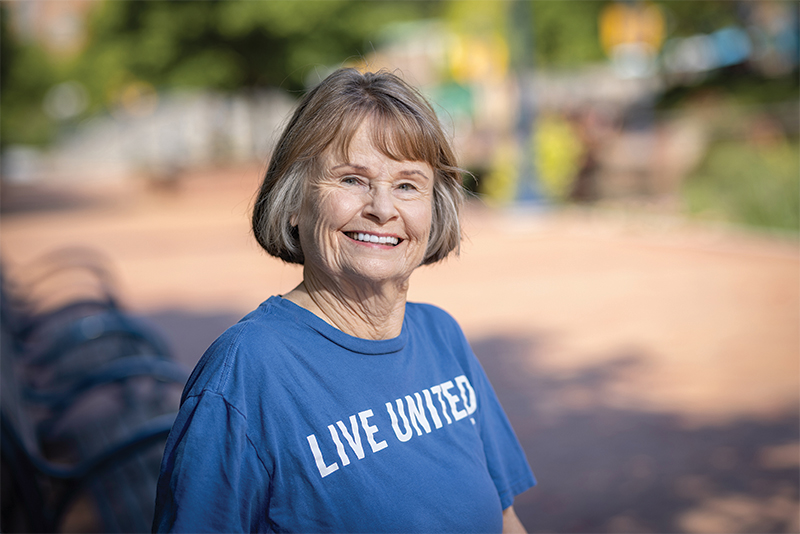 Volunteering was a family affair for Mary Ellis. Her parents, both educators, made volunteering a regular part of their lives. “When my parents both retired, they became full-time volunteers and I saw the joy it brought them,” she says. “I saw the changes they felt that they were able to make. I said as soon as I have time in retirement that is what I am going to do.”

Ellis has followed in her parents’ footsteps. Her professional career was based in government, marketing and nonprofit areas, including serving as press secretary for U.S. Sen. Fritz Hollings and various positions with the U.S. Fire Administration and Federal Emergency Management Agency. Upon her retirement, she set off to become a full-time volunteer.

While attending a conference where then-Maryland Del. Sue Hecht was speaking, she asked the Frederick lawmaker if she needed any volunteers in her Annapolis office. Working in constituent services for Hecht, Ellis was introduced to Heartly House, the domestic violence support organization where she would go on to serve in a variety of capacities, including on the board of directors and as interim chief operating officer. For more than a decade, she has served on the board of the United Way of Frederick County and has volunteered with Supporting Older Adults through Resources (SOAR).

Ellis is drawn to different volunteer opportunities through the mission or wanting to learn more about an area of need. The Frederick resident most enjoys seeing the positive results of people working together to make a difference. “We all need as a community to reach out and be able to make changes that help everyone,” she says.

Her award money will be used to create a fund for SOAR because she saw an opportunity for the organization to be able to grow and help even more individuals in the future. “I have worked in the [Washington, D.C.] area and I’ve worked other places,” Ellis says. “I have never seen a community that is so kindhearted and generous, and where we really pull together. I would like to encourage everyone at some point in their life to spend some time volunteering because you are going to get more back than you give.” 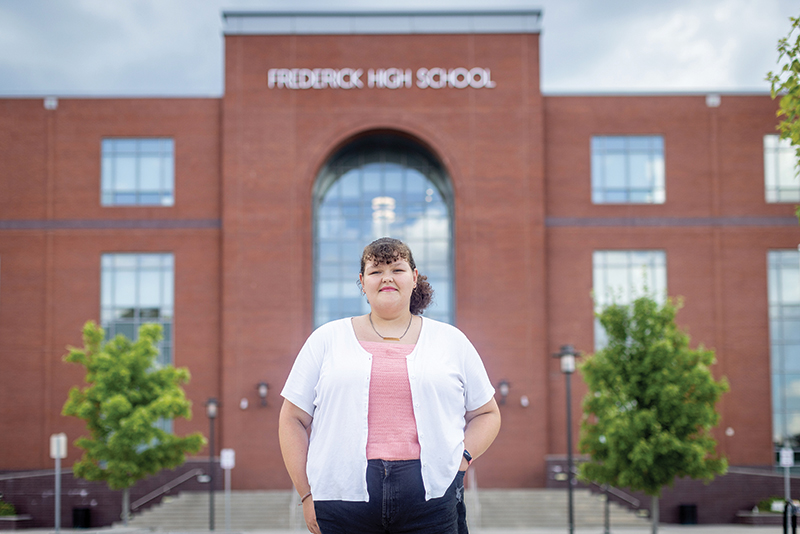 As a Girl Scout for many years, Claire Mathews attends the organization’s summer camp every year. “I would always see older girls helping out and I always wanted to be that for younger girls,” she says. She now helps those younger members as a Girl Scout program aide at Camp Valley View.

Through her work with the organization, she has helped with a number of events including the Brunswick STEM Camp to teach young members about nature, pumpkin pie making to give to area food banks and cookie jamboree to educate younger members on their annual drive.

The Frederick High senior, who is also in her third year at The Academy for the Fine Arts focusing on music, is active in her church in multiple areas, such as helping to collect donated items for food drives, recording services for those unable to attend and helping teach children how to play instruments during the annual summer music camp. She is also heavily involved in the Frederick Children’s Chorus, participating in a number of community events.

“I love being able to help other people and grow my leadership skills,” she says. “It has really forced me to be better at communication and public speaking which has been very helpful.”

Mathews will be putting her award money toward The Academy for the Fine Arts summer camp, where she has been a volunteer. Children from Monocacy, Lincoln and North Frederick elementary schools can come over for a week in summer and immerse themselves in the different arts, from theater and visual arts to dance and music. “I am very excited to see it grow,” she says. “I love being able to help out kids find their creative passions.”