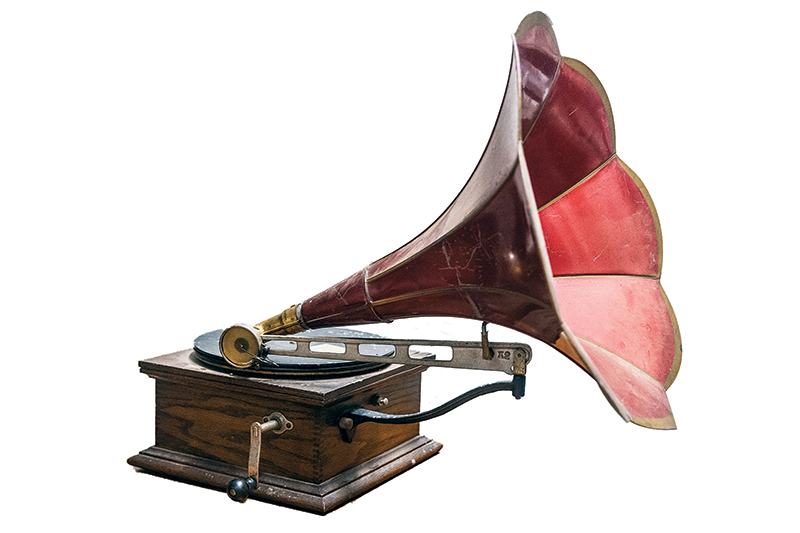 Today, you can easily access music via a streaming app or YouTube clip and listen to almost any song you’d like. This luxury wouldn’t be possible without Thomas Edison’s 1877 invention of the phonograph. Edison set out to make a reliable device that could record audio and then play it back. Using what he had learned in his attempts to build a telephone, Edison figured out how to record sound. Without realizing it, he had revolutionized the music industry forever. People no longer had to attend a concert hall to listen to an hour-long symphony; they could listen to a three-minute song from the comfort of their own homes.

In the vault at Heritage Frederick, surrounded by handcrafted wooden furniture, sits a shiny red phonograph. This hand-cranked device was donated to the Frederick County Historical Society in 1970 and once sat on the second floor of the organization’s main building. But it was moved out when staff and volunteers claimed the phonograph was haunted after hearing music playing in its part the building. That alone wouldn’t be a problem, but during these incidents there was no one on the second floor, meaning there was no one to crank the phonograph. These days, a heavy metal door muffles any sounds coming from the vault where the phonograph is stored. Staff do not frequent the vault, so it’s difficult to say for sure if a ghost is still slowly turning the crank and making music.