For many, Frederick County has earned a reputation for helpfulness and compassion—and, as such, a place where nonprofits can thrive.

“Frederick has a sense of community that I’ve not seen at a lot of other places,” says Melissa Muntz, executive director of the Student Homelessness Initiative Partnership (SHIP). “There is a level of community giving and concern and just involvement that I’ve not seen. I think our nonprofit community is able to accomplish a lot that we wouldn’t be able to accomplish if we were somewhere else.” Though driven by similar passions to serve, each has a unique story behind their path to leadership in the nonprofit community.

Even before she became CEO and executive director of the Boys & Girls Club of Frederick County, Timika Thrasher knew very well the valuable impact the organization can have on a young person. Growing up in the Bronx borough of New York City, she lived it herself.

“The club was like that place where everybody wanted to go to,” she says, “because you went on field trips and you went swimming and you went to parks. You could get out of the four- or five-block radius where your building was or where your apartment was. And you were able to kind of get outside of that radius and do different things because you were going to the club.”

Thrasher’s family would go on to move from the Bronx to Frederick. She married, had children and started a cleaning business with her husband. Then fate stepped in. “Our business was approached about supporting the golf fundraiser for the Boys & Girls Club of Frederick County, ” she recalls. “I said, ‘Sure.’” From there Thrasher would serve on the board and then was asked to become interim CEO and executive director before being named the official CEO and executive director in May of this year. She is deeply committed to the organization’s mission with its after-school programs and summer camps, as well as other activities focusing on science, technology, engineering and math (STEM), health and wellness, and imagination and creativity. “We are offering programs that are helping mold these children,” she says.

As she looks ahead, Thrasher hopes to oversee the expansion of the club, both in what it offers and its clientele. “We want to be there for all young people and their families,” she says.

“I’d like to grow the footprint of where we are serving kids and the age of kids that we’re serving,” she says. “Right now, we are mainly serving elementary-age school kids, but we just opened up two new middle school programs last school year. And the goal would be to continue to open up middle school programs so that, as those middle-schoolers age out, we can organically grow our teen program because we don’t have a teen program at the club.”

Melissa Muntz started her professional life in government and politics, but she found her heart was in nonprofit work. “I always knew that I wanted to help people,” says Muntz, who spent time working for the Maryland State Legislature, U.S. Congress and Capitol Hill lobbying firms after graduating from Hood College. But Muntz, who was president of the Hood College Service Association, says she was drawn to nonprofit work specifically because it enabled her to help others in a more personal and direct way.

With SHIP, she is doing just that.

Through her work, Muntz helps homeless students throughout Frederick County Public Schools to live better lives and have hope for a brighter future. SHIP provides services to more than 800 homeless students.

While staying true to the organization’s foundation of meeting the emergency needs of students, such as shoes or other items, Muntz is also focused on the program’s goal of having a more lasting impact. As such, SHIP not only responds to material needs but also offers academic and emotional support to high schoolers in six of the county’s 10 high schools.

“Students who do not graduate from high school are three-and-a-half times more likely to be homeless as adults,” says Muntz, who was also managing marketing and public relations for Visit Frederick before initially coming to SHIP as its development director. “We are really going above and beyond to make sure that our students are setting goals, achieving those goals and are working their way out of the cycle of homelessness and the cycle of poverty.” For example, SHIP launched a program that will help a students get a driver’s license.

Through SHIP’s programs, Muntz is hopeful for the future of young people experiencing homelessness now and what that future might look like for them as adults.

“We really want to see outcomes in the next five years that show students who needed our services heavily no longer need them at all,” she says. “And not because they’ve aged out, but because they are on their feet and not in need and not experiencing homelessness anymore.”

After graduating from the University of Maryland, Baltimore County with a degree in history, Malcolm Furgol considered teaching. As he searched for a job, however, Furgol noticed something interesting: All the positions he was drawn to had one thing in common.

“They were all nonprofits,” says Furgol, who while in middle and high school accrued so many volunteer hours through tutoring and other services that he received a special citation from the governor. “I began to realize that this could actually be my career. And that really hit home for me.” Furgol would go on to take jobs with such organization as the American Association of State Colleges and Universities and the Nonprofit Roundtable of Greater Washington, as well as serve on the board of the Young Nonprofit Professionals Network of D.C. Prior to being named the executive director for the Frederick County Health Care Coalition in June 2021, he spent eight years with the United Way of Frederick County as director of community impact and grants.

The Health Care Coalition manages the county’s Local Health Improvement Process (LHIP) and is responsible for its recent emphasis on reducing health disparities and increasing health equity. The coalition includes the Frederick County Health Department, Frederick Health and other community partners. The LHIP is the result of the Community Health Needs Assessment conducted every three years, which includes a survey of Frederick County community members. In doing so, the coalition is currently focusing on such health priorities as adverse childhood experiences, type 2 diabetes and mental health through workshops open to the public.

“We are developing and executing strategies that will deliver targeted innovations to address health disparities,” says Furgol, who is also a community benefit specialist with Frederick Health. “… Everyone should have access to what they need to support good health.”

Ashley Waters was confronting a new chapter in her life, and she didn’t want to go it alone. “I had moved to town because my husband lived here,” she says of settling in Frederick in 2011.

Before the move, “I had a good job and had hit a lot of my goals in my 20s,” says Waters, who led UMBC’s satellite campus in Rockville as the director of UMBC-Shady Grove for most of the last decade.

“I was rediscovering myself,” she says. “I was a new mom. I really wanted to work in Frederick, and I was struggling to figure out how to make that work. I just really needed some help. I needed a community of people who were going to support me—the good, the bad and the ugly, as I always say.” She found that community through Woman to Woman Mentoring, an organization that is “fundamentally rooted in helping women,” says Waters. By cultivating mentoring relationships, the organization helps to provide women with guidance, support and community connections by way of individual and general mentoring to STEM-focused mentoring to workshops. Waters went from being a mentee to board chair before becoming executive director in November 2021.

Since those early days, Waters has gone on to find her place in Frederick, even working as communications manager at the City of Frederick for two years during the height of the pandemic. “It was an interesting time,” she says with a smile.

Now, in her current role, Waters wants to continue to offer a community to others like herself when she first arrived in Frederick—women looking for mentorship and connections.

“We don’t want women to have to go at things alone,” says Waters, who has a master’s degree in nonprofit management, a doctorate degree in public administration and was a Maryland Public Service Scholar as part of the Walter Sondheim Nonprofit Leadership program. “Our goal is to help women be heard and to really make those connections and to be able to identify what they want in life. And then let’s figure out a map that allows you to collect those small wins along the way to achieve those goals.”

She adds, “We are a community of women who get it. I see it every day. And it’s really, really something special.”

Eric Anderson knows firsthand the difference an act of kindness can make. He experienced it when his father was diagnosed with cancer. ‘Suddenly, he was requiring blood transfusions,” says Anderson. His father “ended up living about two years beyond his initial prognosis. I tell people we got an extra two years with my dad because of the blood transfusions. So, it became more personal to me.”

Anderson’s nonprofit work has included being the executive director for the American Red Cross of Greater Shenandoah Valley as well as volunteering with the organization for years prior. As a blood drive coordinator, he developed Frederick County’s largest donor effort. 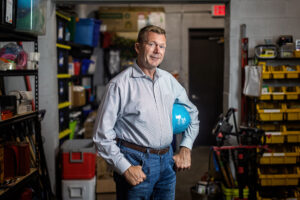 Named executive director in February of Habitat for Humanity of Frederick County, which not only constructs needed homes but provides repairs and other services, Anderson is now bringing his skills and compassion to a new role. But he will tell you the missions of the two organizations aren’t that far apart. “Home and health go hand in hand,” he says.

Anderson is coming on board during a time when Habitat for Humanity is undertaking its largest project to date. The West All Saints Street Project will include the renovation and construction of 12 units of affordable housing on the corner of West All Saints and Ice streets in Downtown Frederick.

“Instead of one applicant out of dozens or even hundreds involved in the process to receive one home in a year or two-year span,” he says, “we have this opportunity to create home ownership for 12 people or 12 families, and to do it in a place in Frederick that’s really going through revitalization. It’s very exciting.”

Doing more for more people and changing more lives in the process—it is a process Anderson has taken to heart, whether it affects his own family or countless others.

“You really never know what somebody’s story is and what you could be doing to make a difference,” he says.