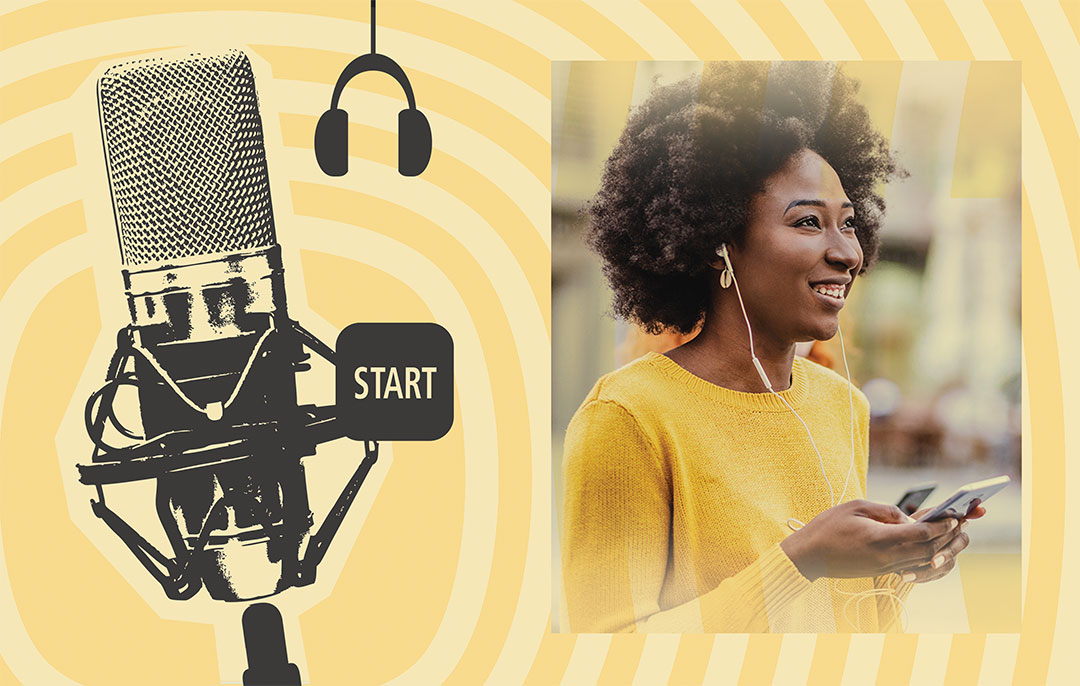 As she sat in the audience watching her daughter’s flute recital, Michelle Newman became flushed. “One of the moms who was 30-something looked over at me and goes, ‘Wow, you’re getting really emotional,’” recalls Newman.

“I was having a hot flash,” says Newman. “It dawned on me at that moment that she didn’t see me as a middle-aged woman. She had no idea my age.”

Having worked in the entertainment industry for two decades, an industry driven by the 18-to-49 demographic, Newman struggled with the idea of turning 50. “When I turned 49, I got so depressed,” she says.

That moment at the recital, however, proved to be an epiphany.

“I began thinking to myself, ‘Why am I holding onto this?’” says Newman. “And I thought there’s a lot of other women out there that feel the same way. How can I help them?”

The idea of reaching out to other women going through midlife became a passion for Newman. And resulted in her own Frederick-based podcast, The New Mid, with topics and guests ranging from how to get fit to restarting one’s career. And Newman has found the podcast a useful resource for spreading her message of the value of midlife.

“Being in someone’s ear is so intimate,” she says.

There’s a lot of listening going on these days. A product in some ways of the pandemic and its accompanying isolation, podcasts have since exploded in popularity in recent years, with listeners embracing their availability and accessibility. And with a range of topics that cover almost any subject area, there is something for everyone. 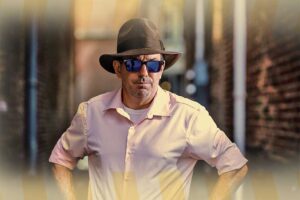 “We’re all on our phones and we’re out and about and it’s pretty easy just to start and stop a podcast,” says Tim Jacobsen, who teaches a course on podcasting at Hood College. “You can listen whether you’re driving somewhere, sitting on a bus or waiting for a doctor’s appointment.”

Recent studies show that over half of the American population has listened to a podcast, with 120 million podcasts listeners overall. Podcasts can be readily found on such platforms as Spotify and Apple and even YouTube.

“A good podcast begins with a good idea,” says Jacobsen.

And there are a lot of them—podcasts and ideas.
In fact, podcasts vary as much as people and their passions, from sports to the supernatural and everything in between. And the Frederick area can claim many of its own original podcasts and podcasters, such as one all about the city and county called Steeples and Peoples.

Steeples and Peoples is the product of husband-and-wife team Mark and Terri Maradei. Maradei, who is a history teacher and former high school football coach, started his own podcast first, The Original Sports Podcast with Mark Maradei. “I have always wanted to go into sports communication,” he says.

As the name implies, his podcast features discussions on all things sports—from March Madness to the NFL Draft to an interview with Paralympian Joel Hunt.

Terri Maradei would come on her husband’s podcasts from time to time, assisting with the mailbag segment where he answered listeners questions. So, why not do a podcast together about the town and county they had lived in for nearly 20 years?

The concept for Steeples and Peoples was easy, they say.

“We want to give you the story behind the story,” says Mark. “Who owns this business or that restaurant. The reason this event is put on and who puts it on. I think people are interested in hearing about those things.”

FROM AIR TO POD

So prevalent have podcasts and podcasting become that an entire local network has been created called Listen Frederick through Manning Media, which owns radio stations 106.9 the Eagle and Key 103.

“A podcast is a radio show in your pocket,” says Kristina Manente, podcast network manager for Manning Media. “The radio stations that Manning Media owns are all local stations and really focused on the community. So, this is just sort of an extension of that but in a podcasting realm.”

Besides the network, Manning Media can offer assistance to those interested in creating their own podcast for a fee, from access to a studio to help in marketing.

Local podcasts that are part of the Listen Frederick network include The Original Sports Podcast, Steeples and Peoples, The New Mid, The Big Sci-fi Podcast, the hockey-oriented Beers in the Lot and Welcome to Crazy with Key 103 morning show cohosts Dina Carole and Dani Gurrie, among many others.

In fact, Welcome to Crazy was a podcast before Carole and Gurrie began cohosting the morning show. “Dani and I met about three-and-a-half years ago and immediately we were friends,” says Carole.

“I said we should start a podcast because we had a good time with each other and were able to tell stories and laugh,” adds Gurrie, a promotions director for Manning Media.

Their podcast is billed as a weekly “rant” by the two about “their crazy lives in an even crazier world” while talking about topics from bad neighbors to Boxing Day.

When the pandemic hit and staff was reduced at the radio station, Gurrie stepped up to fill the void cohosting the morning show with Carole. “We just really have a great chemistry,” says Gurrie.

Erin Markovich, an on-air personality with Key 103, and Matt Schindler of Hagerstown have known each other since elementary school. While Markovich is in radio, Schindler works in IT, but the two share a passion for pop culture and nostalgia. “My house is decorated from the ’50s and ’60s,” says Markovich. “And I have all these old albums and 8-track tapes.”

Hence, their Dissecting the Decades podcast, which, they say, takes a fun look at the events and times of different years from the 1960s to the 2000s. “It’s a chance to remember a favorite toy,” says Schindler, “or a favorite song.”

Another broadcaster, Jason Fraley, entertainment reporter at WTOP in Washington, D.C., for the past 10 years, also has a podcast. Beyond the Fame.

“I would interview all of these big celebrities whenever they came to town to accept some national award at the Kennedy Center or the National Archives or Library of Congress,” explains Fraley, who lives in Frederick. “My pieces on the air are only about like 40 seconds, tops. There was so much tape left on the cutting room floor.” The podcast also includes current interviews, has featured such guests as Aretha Franklin and Carol Burnette, just to name a few.

As shown by Newman and the Maradeis however, podcasts are not just for those in the radio industry. For many, that is the beauty of the medium. It can be an accessible endeavor, not unlike sitting around the table with some friends having a cup of coffee or a cold beer and chatting about common interests.

Beers in the Lot, for example, consists of fellow local hockey league players who take their companionship from the rink (and the parking lot) to a podcast to discuss the hockey life.

“We’ve all played together, and we’ve all played against each other,” says Eric Rigsby, one of the podcast’s four co-hosts. “The whole concept came out of our adult league games or beer league games when everyone ends up hanging out in the parking lot afterwards and sharing beers and joking around.”

That all stopped when COVID-19 happened. “So, the four of us ended up, usually on Friday or Saturday nights, video chatting together and doing the same things of sharing stories and laughing,” says Rigsby. 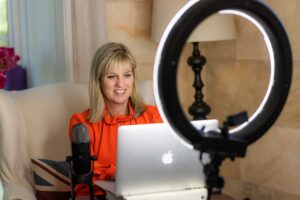 A podcast seemed a natural progression for the foursome. And while life has become more normalized of late, the podcast continues with topics like “Where Have All the Enforcers Gone?” to guests such as Amber Moore of the National Women’s Hockey League. All while having a cold one.

With a quick wit.

The name of the podcast refers to a softball team started years ago by the two. O.C. stands for Office of the Controller, they say. While they no longer work in the same department, they have remained friends.

“We would talk on the phone, two, three times a week just to catch up,” says Alderoty. “Some of our conservations were just about pop culture and stuff. We’re like, we really got to record this. This is good podcast material.”

A recent episode had the dynamic duo making MLB predictions, eulogizing a snack cake icon and engaging in what they describe as a thought-provoking session of “Would You Rather?”—all while indulging in some fine bourbon.

Then there are those who take an otherworldly approach to podcasting.

Mediums Terri Rodabaugh and Rhonda Russo, along with their producer and friend James LaPann, conduct live readings on their Lifting the Veil with Terri and Rhonda podcast. They also discuss astrology, the definition of a soulmate and how to make the most of meeting with a medium, among other topics.

“We’ve experienced so many things in our lives that we thought people would like to hear about,” says Rodabaugh. “And both Rhonda and I are pretty good storytellers. So, a podcast was the perfect way to share with others what they could experience, too.”

Ken Houldsworth of Fedora’s Cryptozoological Online Field Guide podcast takes a trip to the other side, as well, as he explores legends and mysteries. 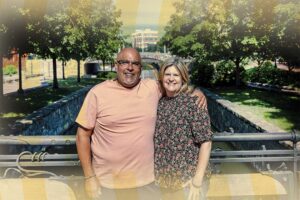 “I like folklore,” says Houldsworth. “And so, my podcast goes in that direction. Like we recently did one on Bloody Mary. Where did that urban legend come from? We went and researched it.” He then proceeded to do a podcast on the spirit who, once conjured in a mirror, is believed to reveal the future. “The podcast is kind of an outlet of what I find interesting,” he says. “And so far, it seems like people find what I find interesting, too.”

Podcasting is not just left to the adults, however. Piper Bailey, 13, has her own podcast, Middle School Mysteries. Bailey, who attends West Frederick Middle School, writes the episodic storyline and records the podcast herself. She also uses friends and teachers as actors for her characters. But being her BFF doesn’t guarantee a spot on the podcast.

“I hold auditions,” she says.

Others want to use their podcasts as a tool to touch lives.

Luke Burke’s podcast, Candidly Speaking, “is pretty much a one-stop-shop for people who may be struggling with something,” he says. “For example, I talk about topics like domestic violence. [The podcast] is a place where people can come and get encouragement or try to understand how they can change a situation that they are going through.”

Burke has experienced his own struggles. “My nephew was shot and killed,” he says. “So, I can relate to those types of things. I want to help.”

For Teressa Cunningham, her The Launch Jesus Initiative podcast is an opportunity to share her faith as a Christian with others, beyond the four walls of the church.

“I often tell people that, in the Bible, Jesus says that we have to cast our net and to tell people the good news of the gospel,” says Cunningham. “And I think that with the technology we have now and especially since COVID, we’re more able to reach more people without actually physically being there.”

Nichole Cubbage doesn’t have her own podcast. But she felt so strongly about advocating for those affected by vanishing twin syndrome that she went looking for a podcast to share her story. “I found it to be most effective to share on a podcast as opposed to focusing on Facebook or something else,” says Cubbage of Frederick, who lost an infant twin during a recent pregnancy.

Cubbage appeared on The Podcast by KevinMD to talk about her own experience and the impact it can have on those suffering this loss.

“His show is pretty widely known, and he had a well-established audience already for me to be able to target,” she says. “It’s an opportunity to broadcast a conversation.”