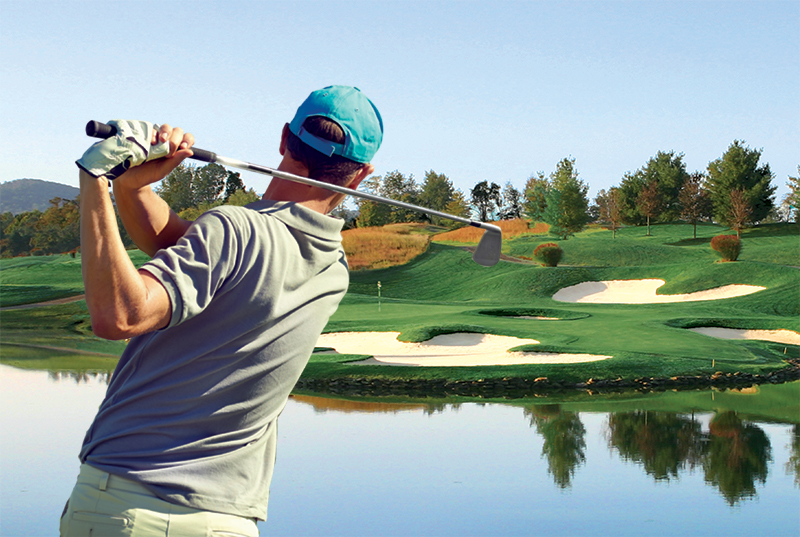 Tired of the growing congestion and rising real estate prices of Montgomery County, I was one of the early migrants north on Interstate 270 to Frederick. But in 1989, the relief of more elbow room and a bigger house came with an unforeseen consequence: When I arrived, there wasn’t a single public golf course in the county.

Back then, players like me drove to Carroll County to play Wakefield Valley or back down into the congestion we were trying to escape to play places like Northwest Park, Poolesville or Falls Road.

At that time in Frederick County, there were three places to play golf, all private. Eaglehead Country Club became WestWinds, which became defunct. The VFW had a bunch of good local amateurs who looped their little nine-hole layout and then hung out into the wee hours at the VFW bar, but that party ended a few years ago and now the course is covered in three-bedroom, two-and-a-half-bath townhomes. The third club, Holly Hills Country Club, was recently sold but members still enjoy the holly and hills of their course and the country club amenities.

It was a couple of years after I arrived that public golf took a turn for the better when a local farmer turned some of his land north of Walkersville into a true public course. And I remember my elation one day when driving along Gas House Pike to see earth being moved and shaped into what appeared to be the construction of another golf course: Clustered Spires opened in 1992, just an 11-minute drive from my front door. It came as welcome relief.

In the three decades since public golf arrived, Frederick County‘s topography has become laced with a collection of upscale, country-club-for-a-day courses better than any other county in the Washington-Baltimore metropolitan area. From undulating layouts in the gathering foothills of the Blue Ridge Mountains to more tame but equally exciting courses closer to the city, public golf in Frederick County now takes a back seat to no other region.

In the myriad of lists that rank public courses in Maryland, Musket Ridge, Maryland National, Whiskey Creek and Worthington Manor all appear regularly, and P.B. Dye occasionally gets a mention. Beyond this upper echelon there is an eclectic cast of more affordable courses like Clustered Spires, Glade Valley, Richland, Maple Run and Rattlewood. It’s clear Frederick County has become the region’s golf Mecca. 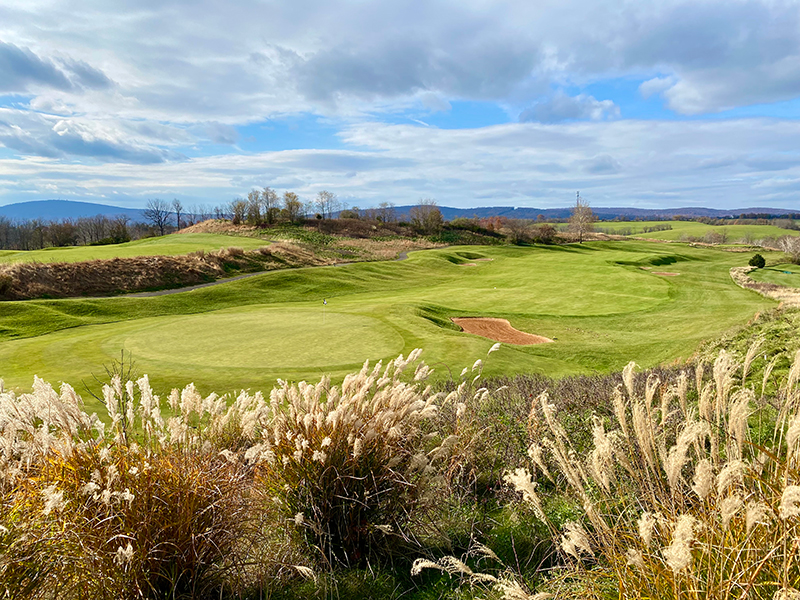 To pick the best course in Frederick County would be as difficult as picking the best local restaurant. It’s a subjective game, every player has an opinion, and every course has its adherents. But the four that would get the most votes—Maryland National, Musket Ridge, Whiskey Creek and Worthington Manor—are the courses that draw players not just locally but from throughout the region.

All built between 1998 and 2002, these upscale courses opened during the golf course building boom of the late 1990s and early 2000s, back when a young Tiger Woods made the game look easy and drove masses of people to try it. The ensuing need for more courses brought developers hoping to cash in on the game’s exploding popularity by turning some of Frederick County’s beautiful and sometimes rugged landscapes into lush, green playgrounds.

“These courses are all excellent designs with great conditions and well-run operations,” says Damon DeVito, managing director of Affinity Management, which oversees Musket Ridge Golf Club in Myersville. “Any slip-up can be costly because customers have many options. In this way we make one another better through healthy competition.”

That means golfers willing to pay for a higher-quality experience—often a triple-figure fee during prime times—can expect to be treated like a member, from warming up on the practice tee to quaffing some post-round beverages in clubhouse restaurants.

“We have a great group of unique courses with a variety of styles of golf,” says Ethan Lester, general manager at Maryland National. “Most are properties without a ton of houses or other distractions around them. People see our courses as real quality golf getaways from the hustle and bustle.”

Considering that all four of these premier courses offer challenging, championship-level layouts, each is quite different. Maryland National and Musket Ridge, neighbors along the Interstate 70 corridor between Frederick and Hagerstown, offer the dichotomy of ruggedness against plush conditions. Maryland National boasts an eclectic collection of par-3s and closes with five consecutive holes with a forced carry over water and wetlands. Few describe it as easy. All describe it as thrilling. And there is rarely a blade of grass out of place. 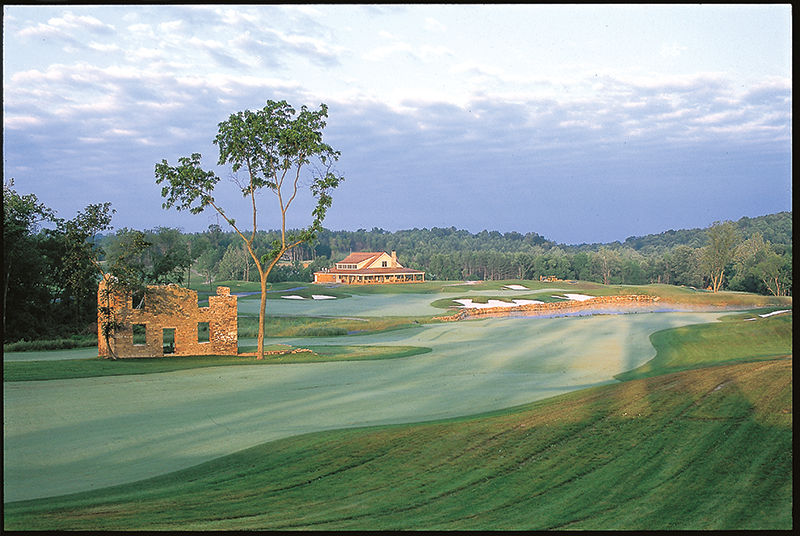 Musket Ridge offers elevation changes akin to a mountain course but is a little easier on your scorecard, offering slightly less-harsh penalties on errant shots. Both offer rural—almost wilderness—getaways where the focus is clearly on a course where you’re much more likely to encounter traffic in the form of deer bouncing across the fairway than cars getting to or from the parking lot.

Closer to the sprawling metropolitan area of the nation’s capital, Whiskey Creek is a bit of a different animal for Frederick County. The course is just minutes from the rat race of I-270 near Urbana yet sits in a secluded location a mile off Fingerboard Road. That and its pub-style clubhouse with a wrap-around porch give it a laid-back atmosphere. The course was designed with help from Ernie Els, one of professional golf’s all-time great players, which adds to the marquee value and draws players willing to travel great distances to play there. “It’s the whole experience. It all rolls itself into a special round for a day,” says general manager Ted Goodenow.

Legend has it that the land Whiskey Creek now occupies was once home to bootleggers, whose ’shine was distilled, barreled and then floated to distribution points via Bush Creek, which now curves around the northern and western edges of the course. The remains of the farmhouse, believed to be the headquarters of this illicit operation, still stand in the middle of the 18th fairway, giving Frederick County an iconic hole. 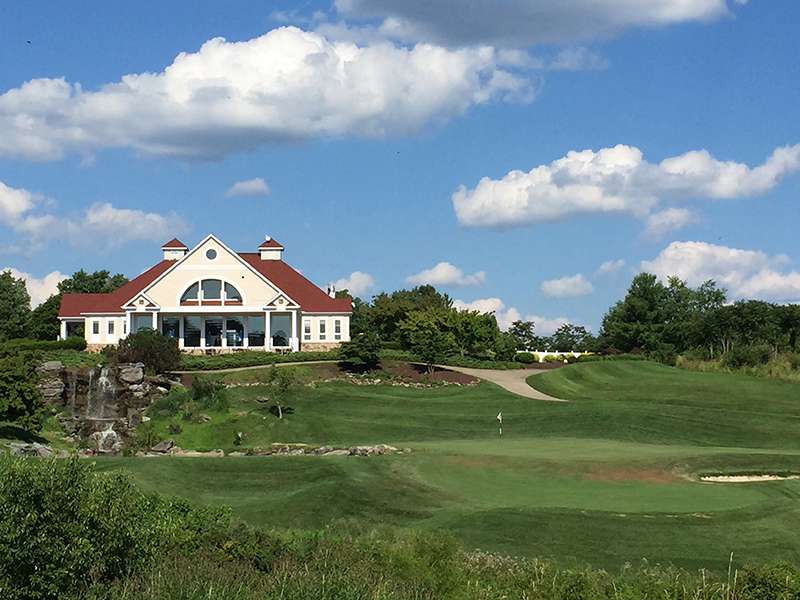 While the course was under construction in the late 1990s, designer P.B. Dye took me on a tour of the layout that would bear his name. “The average golfer doesn’t want the same old, same old,” he told me. So Dye gave players something different—like a three-tiered green with 6 feet of elevation change, other greens that slope oddly away from the direction of play and a drop-shot par-3 with a green almost surrounded by water. He built a few holes refreshingly easy and a few back-breakers that leave you wondering what kind of Dye-abolical mind would create such beasts. It’s a love-it-or-hate-it kind of course.

In Middletown in 2002 an upscale course called Hollow Creek opened, drawing players from across the region. But the recession that started in 2008 had huge impact on the golf economy and courses around the country struggled to survive. This one survived, and now known as Richland Golf Club, the layout remains unchanged from its heyday, although it has become a favorite of local players rather than a destination course. Moderately priced, Richland offers an undulating layout with greens and fairways that mingle with Hollow Road Creek as it all winds through a housing community.

The public golf explosion in the county began north of Walkersville, where in 1991 a farmer turned his land into Glade Valley Golf Course. In more than 30 years it has remained largely unchanged and hugely popular with local players.

Straddling the border between Frederick and Montgomery counties, Rattlewood Golf Course is operated by the Montgomery County Revenue Authority, connecting it with eight other courses in that county. Roughly half of Rattlewood is in each county, although there is nothing to delineate when you cross over the line; a few times that occurs in the middle of a hole.

Famously, President George H.W. Bush would visit Holly Hills on his way to Camp David. The president would whip around the course in less than three hours with his guests, which often included then-head pro Mike McGinnis. Bush took a liking to McGinnis, once inviting him to a state dinner at the White House and introducing him to dignitaries as “my golf pro.”

Less famously, President Bill Clinton would include a round at public Maple Run Golf Course in Thurmont when spending time at Camp David, sometimes using the course as a landing spot for Marine One. A fictional president has played at Maple Run as well. In 2004 the course was used to film an episode of The West Wing with Martin Sheen, Richard Schiff and other cast members walking the fairways. 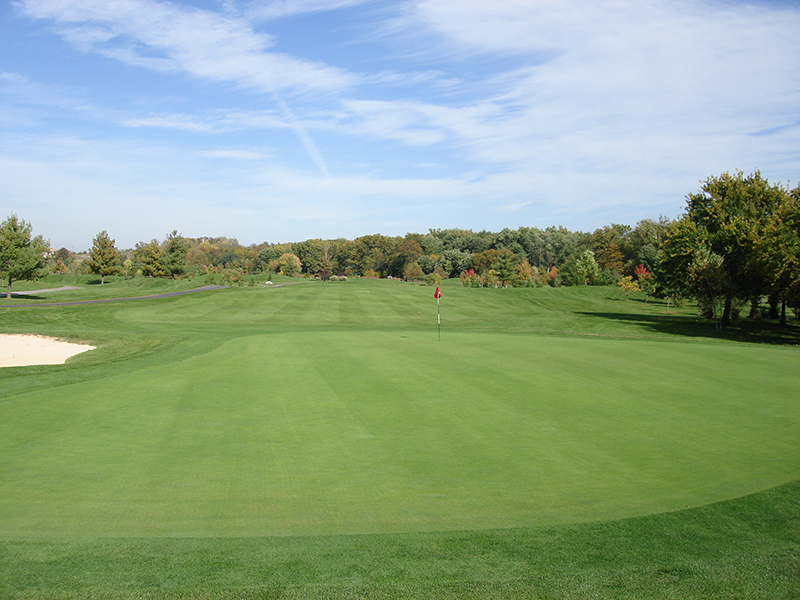 Who would have thought that a worldwide pandemic would put golf back on sure footing in Frederick County and across the country? The game was still struggling coming out of the recession, but golf’s wide-open spaces became a safe haven for a pandemic-weary population afraid to go to the enclosed spaces of restaurants, movie theaters, concert halls and the like.

In golf, social distancing is built-in and gentle breezes disburse those nasty aerosols to places they can do no harm. But most of all, the increase in discretionary income from not hanging out in bars, taking the family to dinner, ball games and what not was funneled to a new set of clubs and weekly tee times.

During the pandemic, and in more normal times, the most popular course in the county judged by rounds played is the city-owned Clustered Spires. The layout occupies the space in a sharp bend in the Monocacy River near the intersection of Gas House Pike and Monocacy Boulevard. Clustered Spires is as straight forward as golf gets—18 holes with wide fairways, big greens and not a single forced carry. There’s nothing spectacular about the course, but there’s absolutely nothing wrong with it. The comfortable layout gives every player regardless of their handicap a chance to notch the best score of their life.

Frederick County public golf has come a long way in the last 30 years. With modest courses for every budget and high-end courses offering a quality golf and après-golf experience, today’s public golfer has little need to traipse across county lines to find a place to spend an afternoon.