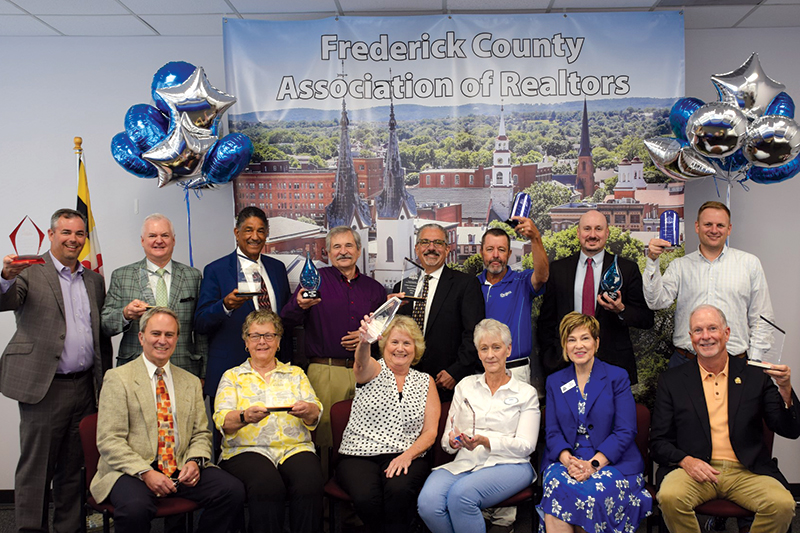 A century ago, the Roaring ‘20s swept across the country, and Frederick County enjoyed the good times, as well. The post-war economic prosperity was seen in flourishing businesses, construction of a new luxury hotel in Downtown Frederick and homebuilding in the city and beyond.

It was the prime time for local real estate brokers to establish a formal Frederick Real Estate Board on Feb. 9, 1922. The organization, whose mission has been to promote the local real estate industry and its professionals, is known today as the Frederick County Association of Realtors (FCAR) and its members are ubiquitous with buying and selling property in the community.

“If you own real estate or if you are in the market for real estate, you have either worked with or are currently working with a residential Realtor or a commercial Realtor,” says Hugh Gordon, association executive for FCAR. “Along the journey, you’ve probably worked with a mortgage banker, a title company, an inspector or one of the many other businesses related to real estate that are members of the Frederick County Association of Realtors.”

In the early days, the Real Estate Board cooperated with other civic and business organizations in encouraging public improvements to accommodate property owners and securing an equitable system of taxation. The new group set out to promote the City of Frederick as a location for new and desirable business enterprises, while making important strides to rid or clean existing “dirty industries” for the betterment of the community. The organization also sought to establish rules of conduct for real estate businesses.

The Real Estate Board would eventually expand to cover the entire county. In addition, important affiliations would be made with state and national real estate boards, giving its members benefits of experience, advice and best practices from a network of professionals.

Throughout its first decade, the Real Estate Board also marketed the benefits of home and business property ownership. Regular newspaper ads stressed the freedom to buy, sell and utilize property.

A key issue of the board’s early involvement occurred in the years immediately following World War II and dealt with government-imposed rent controls. These were controls started during the Great Depression era of the 1930s and continued through World War II. But the rent caps tended to discourage home construction and ownership. A lobbying and education campaign by the organization eventually overturned state and federal rent controls, giving the right of property owners to control rents charged.

Dating back to the late 1930s, the Board of Real Estate opposed federal housing proposed for Frederick, which fostered, in its words, “political landlordism.” The organization sought opportunities for non-government housing accommodations to be created on behalf of those in need of affordable rental units. But there still remained a significant challenge for the Black community in segregated Frederick.

President Lyndon Johnson signed the Civil Rights Act of 1968, a follow-up to the Civil Rights Act of 1964. The legislation expanded on previous laws prohibiting discrimination concerning the sale, rental and financing of housing. FCAR assisted the city government and Frederick County’s Human Relations Committee in an effort to expand housing opportunities for the city’s Black population by creating more adequate and dignified housing solutions. This came as a welcome alternative to the dilapidated slums that once existed in many parts of the city.

But when it comes to civic improvement, sometimes Mother Nature has her own plans.

Floods are among the most common and costly natural disasters in the United States. Even relatively small floods can have a devastating impact. Many consumers have suffered the consequences as they bought homes before learning of a flooding risk. Frederick County has had a history of flooding, thanks in part to mountain water runoff feeding several local, narrow creeks and streams that eventually lead to the larger Potomac and Monocacy rivers.

On Oct. 9, 1976, the City of Frederick was ravaged by flooding, just as it had been over a century before in 1868. (The earlier flood claimed perhaps the most famous house in the town, that of Civil War folk hero Barbara Fritchie on Carroll Creek. Fritchie’s home would be razed shortly thereafter.) Total damage from The Great Flood of ’76 was estimated to be as high as $25 million in 1976 dollars, or more than $100 million today. Safeguarding homes and businesses for the future centered on the Carroll Creek flood control project, which helped propel the rebirth of Downtown Frederick over the next few decades.

Other areas around the county have had flooding issues as well, and FCAR fought for land-use guidelines in the form of the county’s Monocacy Scenic River Study and Management Plan originally approved in 1990 and since updated. Flood zones have been identified for insurance purposes to assist property owners in the event of a potential incident. Flood risk data is included on each listing and FCAR’s local agents help their clients interpret the flooding risks of particular properties.

“At some time, or perhaps numerous times, a Realtor or an affiliate member of FCAR has been in every home and property in Frederick County and very likely built a long-term relationship with the owner,” Gordon says. “It is that way in 2022 and it has been that way for the 100 years that our association has been active in the Frederick community.”

Beyond its work as a professional organization, FCAR is proud of its community involvement, both as an organization, and that of its individual members. Since the inception of the original Real Estate Board of Frederick, members have served the Frederick community through participation in civic, religious and service organizations, frequently participating in fundraisers to benefit local charities and nonprofit groups. Some members have established scholarships, while others have given back through active participation in monthly soup kitchen service days, supply drives and other charitable causes. FCAR has gained honors, both on the state and national level, for its various philanthropic and educational programs, the latest of which comes with the new FCARe Fund. Established with the Community Foundation of Frederick County, this initiative is designed to ensure local nonprofits receive vital support in helping with their missions as they continue to serve Frederick County.

Since its founding a century ago, the organization has expanded in scope, advocacy and civic awareness. The founding principles created to promote the real estate profession and foster professional behavior in its members (including its code of ethics) still dominate today. For 100 years, the organization has advocated for a myriad of community issues relating to the real estate trade. With more than 1,350 current members, FCAR stands as the county’s largest trade association.

“Our connection to the community reaches far beyond real estate transactions,” says Gordon. “As an organization we promote a vibrant culture of volunteerism. Making a difference and giving back to the community is an important part of FCAR’s vision. It’s all about working to make Frederick County better each day, and a place that everyone will want to come to live.”