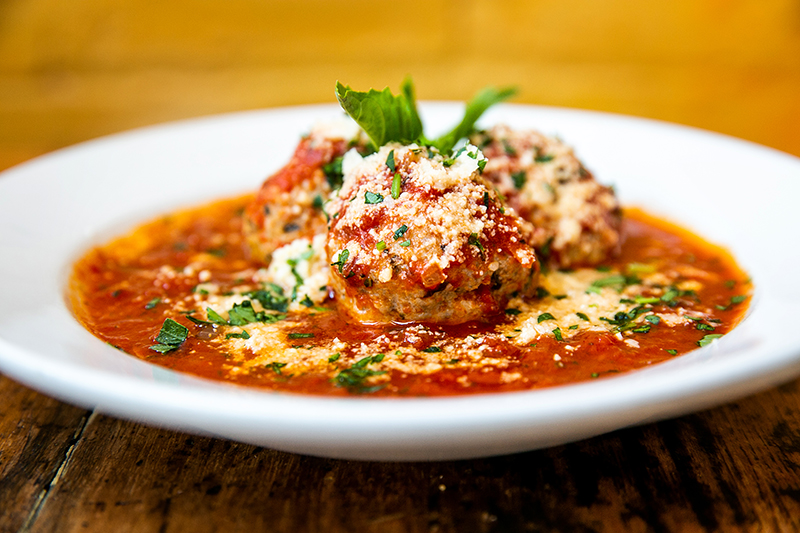 Americans love Italian food. In many ways, we’ve made it our own. Not surprising, since some 16 million of us claim Italian ancestry and every meal is an opportunity to indulge in our favorite food traditions.

But, in reality, many of the “Italian” foods we love are actually American modifications. Once-exotic dishes like pizza and macaroni are now pervasive, with supermarket aisles dedicated to short-cut interpretations such as canned pasta and jarred sauces. Nationally, more than 75,000 pizzerias crank out billions of pies each year. In fact, The Harris Poll reports that pizza is America’s top comfort food. Spaghetti with meatballs is another Americanized adaptation, thanks to our penchant for meat at most meals. In Italy, pasta is typically a first course; meats are served separately.

At its core, Italian food is the food of the people: adaptable, affordable, healthy and tasteful—values every eater can appreciate. Our tour of several local Italian restaurants found cuisine that venerates quality ingredients and pure flavors that nourish and delight.

One of Frederick’s newest tastes of Italy is Delizia Café on East Patrick Street, formerly the Serendipity Market. “We got the space October 1 [2021],” says Carmine Varriale, who co-owns the bistro with his wife, Giovanna. “We had the goal to open the day after Thanksgiving, since we knew how magical Frederick is, especially in Christmas time.”

The couple worked in international marketing, but “we always felt that the United States was our destiny,” shares Carmine. They left Italy in 2019. Now, they cater to Delizia’s customers, who laud their cappuccino and espresso with a little something sweet, like crunchy cannoli or creamy tiramisu. The Varriales trained with Illycaffè, Italy’s king of coffee, to ensure each cup is, according to Carmine, “a beautiful way to start or live the day.” The rich brew can be jazzed up with lavender and mint or almond and rose, even poured over ice cream affogato style.

Varriale says the soul of Italian food is unique. “Food is part of my country’s culture and it is wonderful to have the chance to share.” 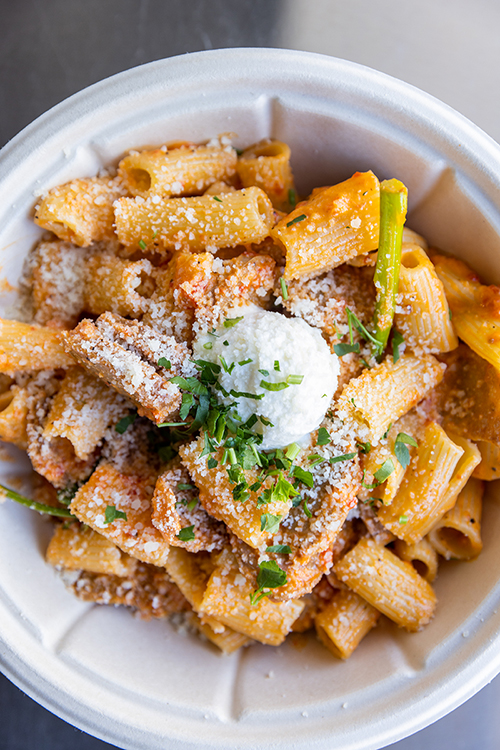 Also new is Tempo Di Pasta on East Church Street. This tiny eatery opened in December 2021, specializing in fresh pasta. Brilliantly colored pasta is displayed prominently. Visitors may find frilly, trumpet-shaped campanelle, verdant tendrils of casarecce or rosy beet bucatini. The pasta stars in cooked-to-order dishes eaten on-site or prepared take-and-bake portions, as well as by the pound. The pasta machine sits just behind the counter. It could turn out 150 pounds per day, but small batches ensure freshness and enable greater variety. The pomodoro sauce is also available to take home, so it is always “time for pasta.”

Claudia Tempo and her son, Joseph, are the dynamic duo behind the business. Both have extensive experience in the food service industry, including running a food truck by the same name. Claudia, who grew up in northern Italy near Lake

Maggiore, says her family worked in hospitality, restaurants and the production of pasta. “This passion for food is a legacy that is channeled into Tempo Di Pasta.”

She says Italian food varies greatly, from region to region and cook to cook, so the Tempos focus on using authentic ingredients to deliver a true taste of Italy. The white mushroom ravioli is a hit, while the cannelloni verde comes blanketed in a mild, creamy sauce. Fans already love their lasagna. They make several versions: meaty Bolognese, butternut squash or rapini/broccolini. Tempo Di Pasta’s Frutti di Mare comes with octopus, calamari and shrimp that’s finished with luxurious bottarga (dried mullet roe), reminiscent of seasides in Sicily, Genoa or Liguria. 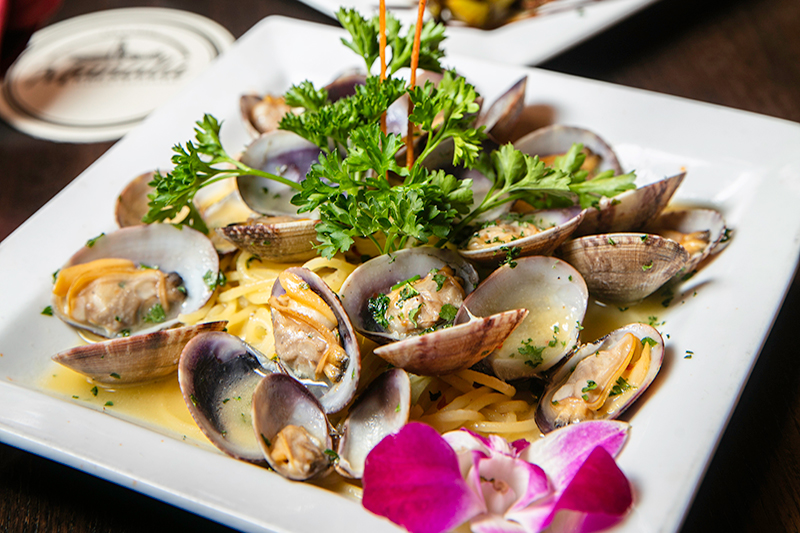 Frederick Magazine readers’ current pick for best Italian restaurant is Manalù on Presidents Court. Opened in November 2014, it’s a perpetual favorite headed by chef/owner Marco Pontecorvo, his wife, Lucia, and their daughter, Naomi. The family hails from Naples, the birthplace of modern pizza. So, it stands to reason that their warmly decorated dining room features a wood-fired oven imported from Italy that soars to 900 degrees.The domed inferno bakes chewy, lightly charred Neapolitan pizza in minutes and every table gets to sample the smoky, unadorned flatbread that is its foundation.

Pontecorvo says they strive for a welcoming, homestyle atmosphere. Repeat diners definitely get it. The trio’s devotion to hospitality lets everyone feel like an insider. Reservations are strongly encouraged. 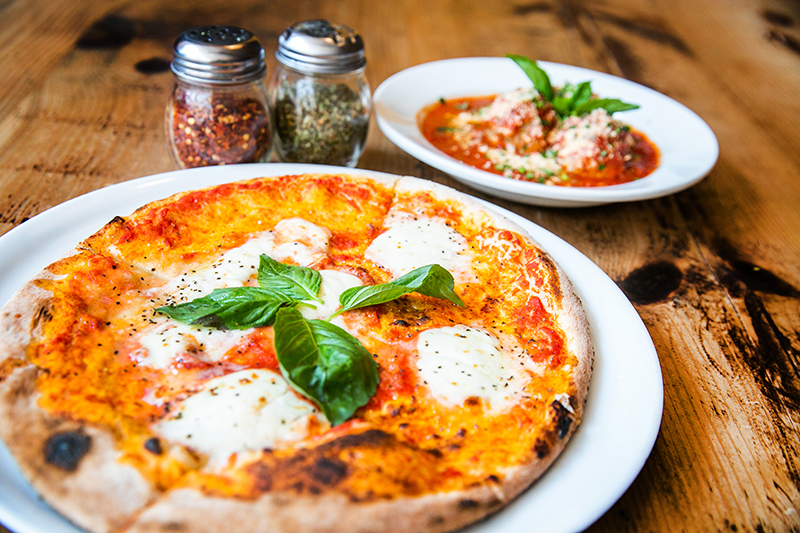 He enlisted a Neapolitan pizza expert to ensure that all ingredients and processes used here meet exacting standards for authenticity, down to the blistering wood-fired oven.

Authentic, imported ingredients come at a premium, making them prime targets for imposters. To preserve the integrity of products like San Marzano tomatoes, Balsamic vinegar from Modena or world-renowned Parmigiano Reggiano, several authorities oversee strict guidelines on production and labeling.

“We do everything that is required,” insists Pistar. “Everything comes from Italy, from the flour to tomatoes.” Even the gluten-free flour is imported from Italy. “So many good meats and cheeses come from Italy. It’s hard not to like it,” he continues. “Then you make pizza with all these ingredients and you can’t resist.” He also incorporates as much local produce as possible.

Pistarro’s is known for its full menu and chef Richard Ade’s creativity. Tables fill with Carciofi alla Romana (baby artichokes with olive oil and lemon) alongside tempura battered eggplant fries and addictive sweet-sour Brussel sprouts with hazelnuts, capers and raisins. There’s grilled lamb, savory meatballs, thick burgers and, a nod to Maryland, creamy crab Alfredo. There’s even Sunday brunch. A definite plus for Downtown, Pistarro’s has parking, a spacious patio and an event room for up to 200 people.

Fratelli’s Italian and Seafood in Middletown regularly earns honors from Frederick Magazine readers, too, especially for its famous crabcakes. But the place’s commitment to “all fresh all the time” from soup to dessert, including all of its pasta, lands Fratelli’s among Frederick’s most recommended Italian restaurants. 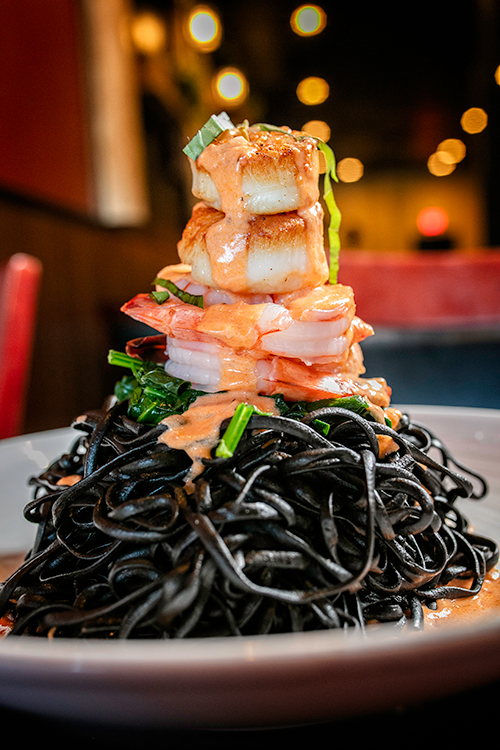 Opened by the Sakellis family in December 2018 in the Cross Stones Commons Plaza, Fratelli’s is known for generous portions. The hardworking pasta machine has its own alcove across from the entrance, so diners can catch a glimpse of the magic as it happens. An order of the popular Fettuccine Gypsy is loaded with mushrooms, artichoke hearts, sweet cherry tomatoes and spinach over ribbons of pasta made just steps from the table. The Meat Lovers Penne piles on the Italian sausage and meatballs with a meaty red sauce. Baked manicotti and lasagna? Spaghetti, linguine and capellini? Yes, all made here, from scratch, just like the sauce.

In addition to hand-cut steaks and indulgent seafood, like their stacked Salmon on Mash or Flounder Imperial, Fratelli’s has a full bar and extensive wine list, plus nightly specials and craft cocktails. And if Chianti isn’t your style, Fratelli’s playful Sangrias incorporate a range of fruit flavors from pomegranate to peach to strawberry and more. For gatherings, Fratelli’s party room holds 70 people.

Cucina Massi on East Patrick Street continues the tradition started by Frederick’s beloved Nido’s Little Ristorante. An enduring favorite, the celebrated white pizza is topped with romatic garlic and nutty fontina cheese then finished with EVOO, but don’t overlook the rest of the menu. Its spring version includes classics like marsala and baked penne. There’s a mushroom risotto with shrimp, asiago and a whisper of truffle or Spaghetti Alla Carbonara with pancetta and Parmigiano. Cucina Massi’s Capellini Caprese regularly tempts diners. It features sausage, tomato and basil in a creamy pink sauce crowned with fresh mozzarella.

There’s a sizeable spuntino selection, too. The plural is spuntini, as these sharable snacks are often equated to Spanish tapas. They are perfect for passing around Cucina Massi’s secluded patio. Owner Massimo Liberatore reports recent upgrades will keep the patio open year-round. He’s also planning to add a pasta machine, but says both fresh and dried versions have a place at the table. “There’s no such thing as bad pasta! It is loved by all Italians in all regions.”

According to Liberatore and others, pasta is a hallmark of the cuisine. After Benito Mussolini took over Italy in the 1920s, he imposed import bans to make the country self-sufficient, which led to food shortages. The fascist regime tried to convince Italians to eat rice instead, but no one bought it. “Pasta was a symbol of defiance for the Italian resistance,” Liberatore says. The anti-pasta propaganda backfired and people ate more in protest “and simply because it is delicious!” 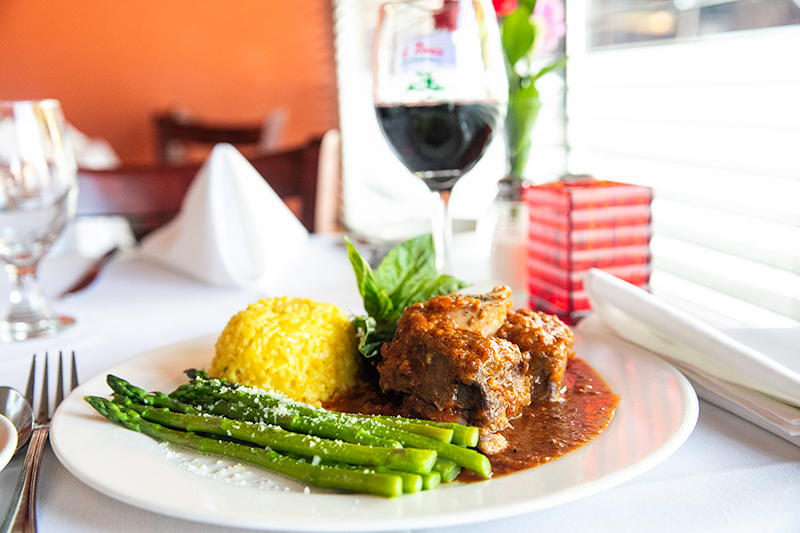 Il Porto on South Market Street is a cozy haven with Southern Italian flair. It boasts rosy décor and elegant white linens, with the feel of an open-air café. Opened in 2007 by Alberto Cruz, il Porto offers fresh foods, a full bar and daily specials with an upscale, old-school vibe. It does hand-made ravioli, including lobster or spinach, lasagna, manicotti and meat cannelloni. Bread and pizza doughs are made in-house, too. In season, the kitchen incorporates locally grown tomatoes, basil, zucchini and other veggies, while the house red sauce amps up the flavor with naturally sweet carrot and fragrant wine.

Meat eaters will appreciate il Porto’s range of beef, sausages, chicken and pork, especially the Lombardy-style ossobuco (a braised cross-cut veal shank) and slow-roasted veal, which are popular specials. Guests can order online, including everything from flavored martinis to desserts like tartuffo or nutty spumoni.

Those folks who would rather cook their own Italian have options, too. Juliet’s Italian Market packs a lot into its small space, including fresh mozzarella made by hand, and Tempo Di Pasta offers imported treats, like pistachio cream or peppery olive oil, in its market section.

From casual to posh, classic or inventive, grab-and-go or leisurely repast, local foodies have molte (many) options and each bite is an opportunity to explore a world of flavor. We think Nonna would approve.