A Team of Their Own 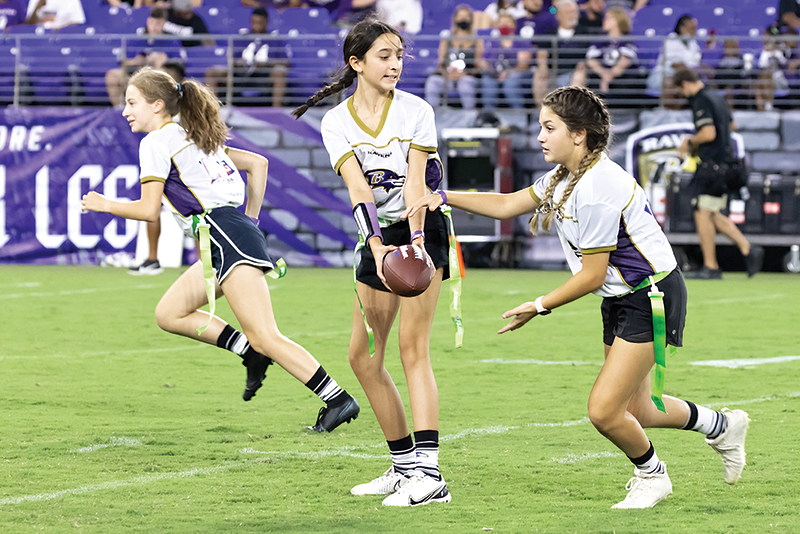 Following the COVID-19 shutdown that cancelled nearly all youth sports in the spring of 2020, many looked forward to at least a partial resumption of outdoor activities in the fall. But Urbana Middle School student Dana Damoulakis noticed that many of the available sports, such as flag football, were for boys only.

She told her father, Nick Damoulakis, that it wasn’t fair to exclude girls. “She said, ‘Can we have an all-girls flag football team? And I said ‘Sure. Why not?’ She texted her friends and used social media and probably within an hour she came back and said, ‘I have 10 girls ready to play.’”
For nearly a decade, Nick Damoulakis had coached his son John’s all-boys flag football team — even making it to nationals in 2019. But this was different. Sure, the 10 girls who signed on—11 and 12 years old at the time—were athletes who played multiple sports over the years, but only one had ever competed in flag football before. After getting permission from the Frederick County Parks and Recreation Division to form the team, Nick Damoulakis didn’t immediately head to the field. Instead, the team’s first gathering was held at his software company’s boardroom to outline the strategy and rules of the game. Their first official practice involved learning the field and watching other teams practice, including John Damoulakis’ team. The boys, who were 15 and 16, would run plays, then tell the girls what they were doing.

Knowing the girls would be playing boys teams that had been together for years, Damoulakis had the team, dubbed the Lady Ravens, scrimmage against his son’s team so they wouldn’t be nervous once games started. He also moved twice-a-week practices to his backyard so the girls would not be intimidated by the other teams. During their first game, the Lady Ravens scored on their opening play and were leading most of the contest. Despite losing by one touchdown, the game boosted their confidence. The next game was also a close match with the team again losing by only a touchdown. But the losing streak ended there. They won their next game and had a winning record at season’s end.

“When these girls were going out on the football fields, there were boys that would say complete nonsense to them,” Nick Damoulakis recalls. “Sometimes parents would say things. Coaches would insinuate not touching them in certain spots. They had to deal with a lot and they just kept going through it and winning games.”

During the first season, some boys even laughed at the girls while they were on the field. The boys “would talk smack on the field and then we would start winning and the emotions start coming out and that is when you start seeing what people are really about,” he says. While he estimates about a third of the opponents made derogatory comments, the majority were respectful and commended the girls on their play, even coming over to shake their hands after a game.

In the spring of last year, the Lady Ravens again put together a winning season. By fall, the girls aged out of the 11/12 bracket and into one with players 14 to 16 years old. Though the Lady Ravens did not have a winning season, they remained competitive and did win some games.
One of the highlights of the past season was playing in an all-girls, NFL-affiliated regional tournament in Washington, D.C. The recreation team got to play against travel teams and ended up winning their bracket before falling to the number-one team in the contest in the end.

“This not only makes us better players but brings us closer as friends,” says Sophia Spitulnik, 13. In addition to flag football, the eighth-grader at Urbana Middle School plays basketball and lacrosse and is a member of a poms team. Sophia hopes other girls understand that there are no boundaries for what sports boys and girls can play. “Joining a sport that is mainly played by boys was out of my comfort zone but as a team we proved everyone wrong.”

Claire Duclos, another Urbana eighth-grader, says, “Girls can play any sport that they put their heart and their mind into. We work hard, train hard and it pays off in the end.”

In addition to flag football, Claire plays basketball year-round and sees parallels between the two sports. “I enjoy being able to always have people to depend on and motivate me and I know that everyone will always have each other’s backs,” she says. “Being on this team has made each and every one of us grow and learn as athletes and individuals.”

Claire, 13, hopes other girls can see the Lady Ravens play and gain the confidence and motivation to try something new. “At our first game, we got our confidence and motivation from our coaches and now we hope that girls younger and older than us will see us playing and understand that anyone can do anything if it is something you enjoy no matter your gender,” she says.

Tina Lehman, parks and recreation specialist, has enjoyed watching the Lady Ravens gain respect and recognition in the community, specifically from the all-boys teams they have played. “[The boys] know the Lady Ravens aren’t going to be a cake walk, so to speak,” she says. “They know they are going to be competitive, so it has been awesome to watch them grow.”

The Lady Ravens’ NFL namesake took notice of the girls’ achievements and invited the team to play in intrasquad exhibition during halftime of a preseason game at M&T Bank Stadium in Baltimore. The NFL Ravens have also committed $250,000 to develop high school girls flag football in the state.

As word spread about the Lady Ravens, more girls have expressed an interest in playing flag football and the county is launching a girls flag football league for the spring and fall seasons. There will be an 11/12 and 13/14 division, “with room to grow if there is interest in younger or older athletes as well,” Lehman says. She hopes each division has between seven to 10 teams.

“There is definitely some popularity with the Lady Ravens,” Lehman says. “I think people caught on to how competitive they are and how well they do. They have a lot of skilled players. There were definitely some girls wanting to be a part of that.” Lehman adds, “There is just a sense of empowerment that comes with being on an all-girls team. It seems like you are included in something that is bigger than yourself. Sports, in general, is a male-dominated world, so the more female athletes and the more empowerment we give them the better, and that is just going to create better athletes, better individuals.”

When the team formed in 2020, Nick Damoulakis had no expectation that its popularity would spawn an entire league, nor was that his goal. “For me, when I coach, it is not about football,” he says. “It’s about life lessons. I really try to teach them to be the best versions of themselves, to teach them positive reinforcement and be a positive person on the team and bring everybody else up.” One of the most rewarding things for him is seeing the girls gaining life lessons that go far beyond X’s and O’s. “It is building them to be great future leaders with an enormous amount of confidence to conquer anything,” he says.