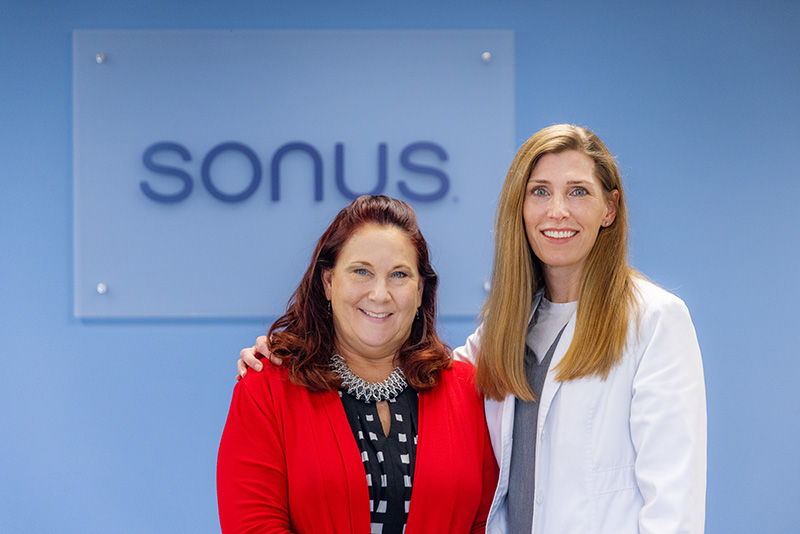 Andrea Nunez has worn hearing aids since she was 2. The devices were once bulky and secured with toupee tape. Now they’re sleek and small, with a tiny wire extending from behind her ears into the ear canal.

“It starts with a great audiologist,” says Nunez, 37. Frederick audiologist Lori Barr adjusts the hearing aid to fit Nunez’ hearing loss. “She adjusts the different pitches. She raises the power for some and lowers it for others.

She boosts the high frequencies and asks how it sounds until we get it just right.”

Although she was born with genetic sensorineural hearing loss, Nunez, a working mom of two, rarely thinks about her hearing except when she schedules her annual appointment.

“People will think, ‘I have a mild loss, and I’ll wait until it’s bad,’” Barr says. “That’s not what you should be thinking, however.” Studies show a connection between untreated hearing loss and types of dementia, including Alzheimer’s disease.

The effects of hearing loss increase with age. One-third of people between the ages of 65 and 74 suffer from hearing loss, according to the National Institutes of Health. By age 75, nearly one half of adults have some hearing loss, and it is one of the most common health problems affecting older adults.

With age, many people lose the ability to hear high-frequency sounds. “Those are associated with consonants,” Barr says. “When people first discover they have a hearing loss, they typically wait seven years to get help. During that time, the brain forgets how to hear those sounds.”

Hearing loss has lots of causes. The most common, known as presbycusis, is age-related and often runs in families. This is where speech starts sounding muffled. You may find yourself turning up the TV volume more and more. Loud noises become uncomfortable. Background noise is a problem.

Noise exposure is another cause. That doesn’t mean if you attended lots of rock concerts when you were younger, you’ll lose some hearing. But those who work in noisy environments, like landscapers, first responders, construction workers, factory workers and others repeatedly exposed to loud noises may gradually lose the ability to hear those high-frequency consonant sounds.

“I worry when I hear young kids blast music over lawnmowers,” Barr says. If you’re listening to music while you work, Barr recommends you still be able to hear people talking around you. “If you’re trying to talk to someone and they can’t hear you over their music, then you know it’s too loud.”

She’s worn earplugs to movie theaters and could still hear the dialogue. “I won’t go see an action movie because I know it’s going to be too loud,” she says. “If something feels too loud, it probably is.” 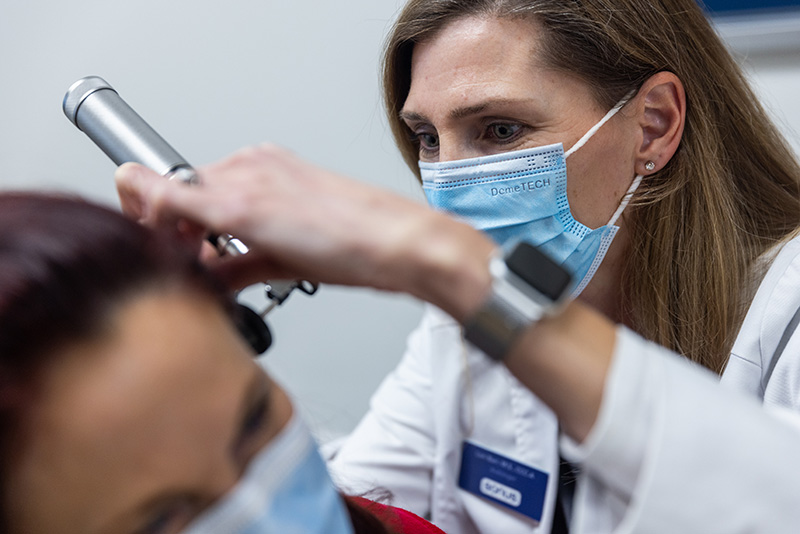 Hearing aid technology has changed a lot in the 35 years Nunez has been wearing them. As a child, she wore analog hearing aids that were less effective at eliminating background noises and less comfortable to wear.

“Hearing aids are all digital now,” Barr says. “We have Bluetooth capabilities. You can adjust your hearing aid on an app on your phone. They have rechargeable batteries.” Directional microphones help tune out background noise.

Those aren’t perfect, but they work pretty well, Nunez says. In her job working for Montgomery County government, she’ll still sit in the middle of a conference room to pick up on what everyone’s saying. It was worse when she was a young lawyer trying to take notes in a courtroom, or a college student in a large lecture hall.

But for the most part, hearing aids have helped her live a normal life. “The technology improves every five years or so,” she says. Her mother, who suffers from the same genetic hearing problem, has an even higher-tech hearing aid. “Hers is Bluetooth, and if she’s driving, she picks up calls and it connects straight into her ears. She can listen to podcasts on it.”

Doug Shepard, of Miracle-Ear Frederick, says a good hearing aid is all about quality of life. “Forty to 50 percent of people who come in to see me don’t feel they need to, but their spouse or family member encourages them,” he says. “Then they say, ‘I wish I’d done this years ago.’ Most people don’t have a clue as to how much they’re missing.”

Hearing aids aren’t cheap, usually $3,000 to $8,000, but as Nunez says, a pair can last her five years. Shepard has clients who keep hearing aids six to eight years. Insurance coverage is usually limited, but most devices come with warranties.

Shepard has been wearing hearing aids for 16 years. Most of his clients are seniors, and he understands their frustrations. “People with a good quality hearing aid today can often hear better in noisy environments than people with good hearing,” he says. Directional microphones keep getting better. “The advent of rechargeable hearing aids is nice for patients who have dexterity issues,” he added. 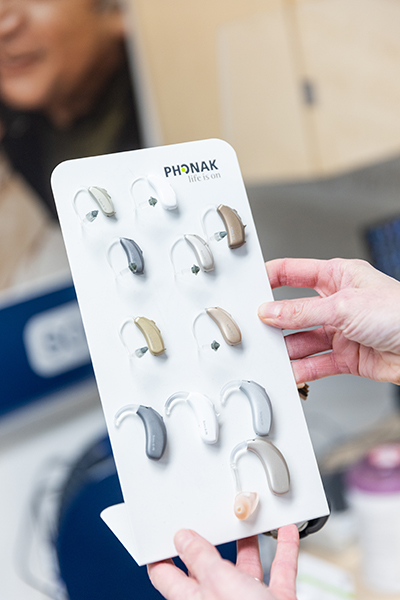 Hearing aids worn behind the ear are unobtrusive and typically come with more options than in-ear hearing aids, he says. They are expensive because they contain sophisticated technology that is miniaturized. “Hearing aids can do one million functions a second,” he says.

Unfortunately, however, 40 to 50 percent of people who could benefit from hearing aids never get help, Shepard says. That means many older people rely on lip-reading and also become more at risk for dementia. “I would never wish pain on anyone, but I sometimes wish there was pain so people would get help sooner,” he says.

Hearing loss is usually so gradual, most people don’t notice it, Shepard says. “People can lose their ability to understand speech by putting this off,” he says.

“I couldn’t live without them,” says Kelly Malloy, 74, of Frederick, one of Shepard’s clients. “I really was quite deaf. I don’t know how to explain to people all I was missing.” Like Nunez, he prefers battery-powered aids, and he carries extra batteries in case he needs to make a quick change.

After 10 years with hearing aids, he’s still training his brain to adjust to normal hearing. Malloy has genetic hearing loss and has lost 80 percent of his hearing. “You don’t know you’re going deaf,” he says. “The sooner you go [for treatment], the better. The business of hearing is so important.”

Some people, like Nunez, are born with hearing loss. Diagnosis improved considerably about 20 years ago when infant screenings began, according to Mary Kay Morgan, audiologist at the Frederick County Developmental Center. The Maryland Early Hearing Detection and Intervention Program ensures that kids with hearing loss don’t miss out on those early speech and language development years by screening for hearing loss at birth.

Most insurance plans and Medicaid do cover hearing aids for children in Maryland, and there are assistance programs. Hearing aids for kids come in fun color choices, and kids often easily adapt to the digital Bluetooth aids, Morgan says. “I fit a little girl who is 11, and she had no problem syncing her hearing aid to her devices,” she says.

She fit a young man of 18 with a rechargeable hearing aid that automatically turns on when he takes it out of the charger.

“To me, one of the biggest hurdles is the stigma, that can be overwhelming, especially in middle school when kids ask a lot of questions,” she says. “The parents’ attitude makes a big difference.”