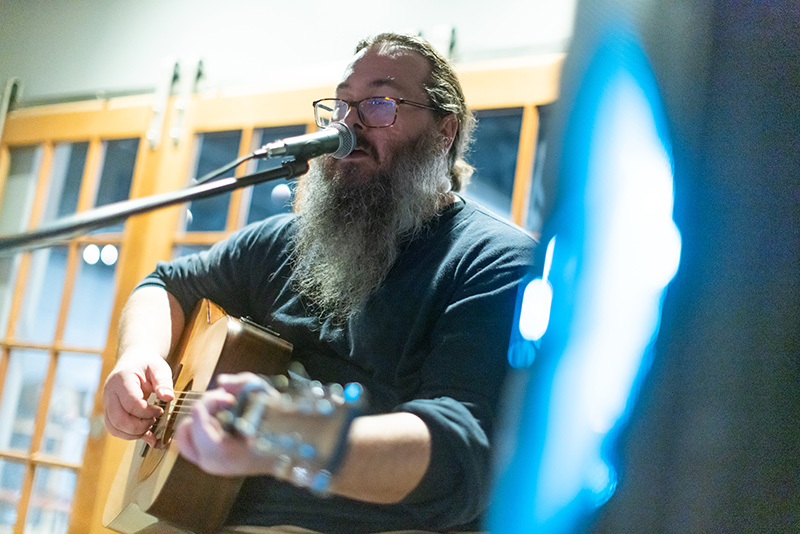 Live music went silent. When the pandemic shut down businesses and limited the number of patrons who could sit in a bar or restaurant, performers suddenly found themselves with no places to perform.

“It was frustrating,” says Abie Lichtman who performs in Kitewave, a local psychedelic jam band.

But the music did not stay silent. As mandates were lifted, people began emerging from their homes and looking for live entertainment. “I remember the vibe in the building,” Randall Jones, general manager of Café 611, says of the first shows after the shutdown. “Everybody was so excited and thankful, but still very cautious.”

While North Market Street’s Café 611 is an established venue for live entertainment, breweries such as Olde Mother and Smoketown Creekside have come to the live music scene more recently. The combination is a natural, says Keith Marcoux, Olde Mother Brewery co-founder. “Beer and music bring people together,” he says.

That equation was halted during the quarantine, however. “[But] as soon as live music was allowed again, it didn’t matter what band or what style of music, people were coming to hear it,” says Jake Blackmon, director of operations for Smoketown Creekside. “After a year and a half of things being so weird and so foreign, I think everyone was just really excited to have live music back.”

“[But] as soon as live music was allowed again, it didn’t matter what band or what style of music, people were coming to hear it.” – Jake Blackmon

Smoketown Creekside’s live music offerings run the gamut from cover bands to jam bands to bluegrass and everything in between.

Nick Wilson, one of the co-owners of Olde Mother Brewery, plays in a band called Tending to the Corpses. This past October the brewery and Café 611 co-sponsored Doom Fest, a weekend of doom metal. The brewery also has other live music events including showcasing the talent of local artists. “We love music here,” says Marcoux. “All kinds of music. So, we want to support the music scene.”

Musicians and performers in the area are glad to see them do so. The pandemic was not easy for many of them. “There was a period of time there where you wondered if you would ever perform live again,” says Andrew Bromhal of the local indie rock band Silent Old Mtns.

“I think we thought it would last a couple of weeks but here we are,” says Brian Zuckerman of the local rock band Cyrenic. “It felt good to be back on stage again.”

Performers and musicians aren’t the only ones glad to have live music back. “There was a lot of people just coming up and saying, ‘I needed that. I missed it,’” says Bromhal.

Sometimes you miss what you can’t have.

Lichtman says he was seeing a lack of enthusiasm for the local music scene prior to the pandemic. More recently though, “I’m excited. We’ve got a whole bunch of new bands and new people in the area who are starting bands.”

While stuck at home, many performers and musicians took the opportunity to hone their craft by creating new music, an effort to keep the music alive even if it couldn’t be performed that way. “We couldn’t see each other or be in the same room or go to a recording studio but the band still existed,” Bromhal says.

Others made the decision to actually pursue their interest in music. Asa Weeks, for example. “I had been writing music for five, six years prior to the pandemic,” he says, “but I had never really taken it seriously. I always knew it was something I can do, but I had never put the pedal to the metal.”

That changed during the shutdown.

“I had a lot of time at home,” says Weeks, who is primarily a rapper. “I had a friend that introduced me to someone who is now my producer, and we began making music together.”

And when he finally could, Weeks took his music to the stage, including a performance at Sky Stage, an interactive public art display and amphitheater in the heart of Downtown Frederick. Now, Weeks is eager to do more.

Chris Perry and Colin McGuire of the recently formed Could Be Better, which assists performers and bands in booking shows, are eager to help him and others do just that. Could Be Better is in many ways a product of the pandemic and its aftermath.

“Colin and I talked about it quite a bit when everything shut down and the idea I think that we came to pretty quickly was we wanted to be part of the first few shows back,” says Perry. “We wanted to try and help whenever it got safe and the world kind of opened up. We wanted to be able to be some of the first to put on shows and help people get out of the house and get back to normal.” Could Be Better works with such performers as Weeks, Old Silent Mtns. and Kitewave, among others.

While live music has come back, it has done so precariously. And as of Dec. 31, Frederick County reinstated a mask mandate for inside public places. “We had to cancel shows in January,” says Perry. “Bands weren’t feeling comfortable with Maryland being in a state of emergency and with a mask mandate.”

Perry and McGuire are pivoting and have created a podcast called Could Be Better Meh to keep their mission alive. “The podcast is just another avenue for us to continue the conversations that we’d have at shows with the bands we really dig,” he says.

Yet, despite that uncertainty it hasn’t stopped live music or its future for that matter. Those like Blackmon and Niko Negas are looking even further ahead in the hopes of creating new venues for live music.

Smoketown Brewing Station in Brunswick is planning to soon offer a full venue for performances. The 8,000-square-foot historical event space located in a former fire hall has in the past hosted such iconic entertainers as Patsy Cline and George Jones. Now, as part of the Smoketown Brewing Station, the brewery hopes to bring it to life again.

Union Mills Public House in Downtown Frederick will focus primarily on events such as weddings, but is also open to the idea of having live music events. “We want to procure regional and national acts as well as comedy,” says Negas, who owns the establishment along with his wife, Mary Custer. “And of course, we would be doing something with local music as well. “

It’s all good news. However, two years with COVID-19 and its variants is never far from anyone’s mind.

“It is still concerning just because at any moment you never know if they’re going to be like, ‘Hey, we got to shut down,’” says Café 611’s Jones even as the Omicron variant is raging.

But he and others like him are staying true to the effort. “It was really trying,” says Jones. “But I think we’re going to make it. I’ve never really thought differently. We just have to push on.”