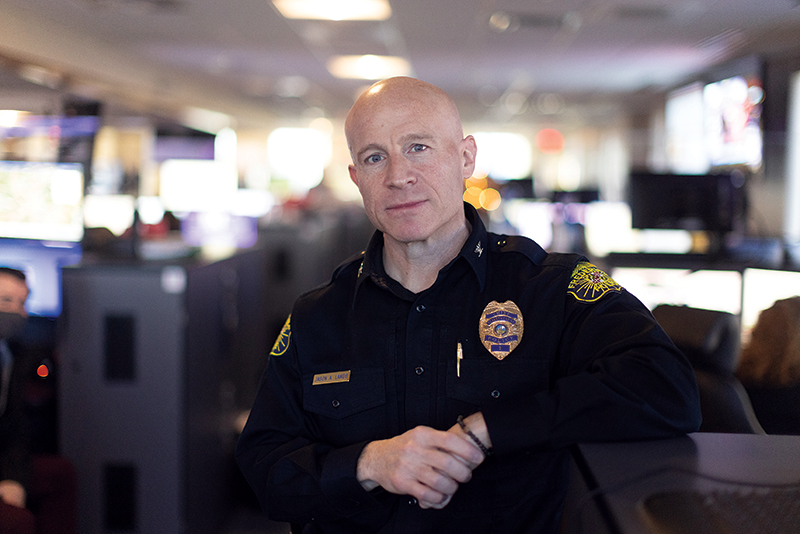 The call came in about a shooting at the nearby Tree of Life Synagogue, his family’s synagogue. My grandfather is there, thought Jason Lando. For a split second on that October day in 2018, Lando was not a Pittsburgh police officer but a concerned grandson.

“Then I went into police mode,” says Lando, who became Frederick’s chief of police this past year after a 20-year career in the Steel City.

Lando, the on-duty commander, jumped into his car and hurried to the Tree of Life Synagogue in his childhood neighborhood of Squirrel Hill. In a disruption of fate, Lando’s grandfather, Morris “Moe” Lebow, did not attend the synagogue that day. “This is a man who attended every single day,” says Lando. “But that day he wasn’t feeling well.”

Unfortunately, many of his grandfather’s friends were in the building. To this day, when driving past the synagogue where the deadliest anti-Semitic attack on U.S. soil took place, Lando will hear his now 102-year-old grandfather say, “That’s where my friends died.”

The human side has been a large part of Lando’s police experience, in many ways even defining his career in law enforcement. To be sure, those who have known him throughout his career, will tell you that he is tough and tough on crime. “The bad guys need to be held accountable,” he says. But where and when a sense of humanity is needed, Lando is equally committed.

“He just has this strong desire to help people,” says his lifelong friend, Jeremy Lipman. “He has always been that way.”

Many children want to be a police officer when they grow up, but Lando did so with a passion. “I would chase my brother [Brad] around the house with these plastic toy handcuffs,” says Lando.

And it didn’t stop with playing cops and robbers.

“We used to go to Miami every winter and visit our grandparents,” says Brad Lando. “There was a police museum there. And every single year he would drag the family to it. Every. Single. Year.”

Not surprising, then, that Frederick’s future police chief took to a strict code of behavior early on, which he expected of others. “When I was about 13 years old there was this candy store that me and my friends went to after school,” says Lando. “One day when we walked out of the store after paying for our candy and my friend pulled a few pieces out of his pocket. He said, ‘I just took it.’ I was like, ‘Get back in there right now and pay for it.’ And he looked at me, and says, ‘You are such a cop.’”

By the time he was 16, his passion for police work had not diminished, but he was too young to become a law enforcement officer. So, he turned his attention to being an EMT. “It was an option to do public service work,” he says. “I volunteered on an ambulance.” When he was 18, he and Lipman attended paramedic school together.

And Lipman, now a surgeon, gleefully recalls his friend’s aversion to needles. “So, in paramedic school, we learned to give each other shots and start IVs on each other,” says Lipman. “And I don’t think it’s an exaggeration to say that three people had to hold him down for me to practice on him.”

But casual phobias never deterred Lando, who even worked as a flight paramedic. “And I hate flying,” he says with a grin.

Finally, Lando realized his dream of being a law enforcement officer when he joined the force in Pittsburgh at the age of 22. He was not disappointed, although a bit battered and bruised.

“My first few days on the job we’re chasing cars, and we’re chasing people,” he says. “I was wrestling on the ground with somebody, and my uniform got torn. People were calling me names. And then I get home and I’m like, ‘This is the coolest job in the world. But, boy, this is way harder than I thought it would be.’”

Still, he couldn’t get enough of police work.

“At the end of the night,” he says, “after I worked the 3-to-11 shift, the sergeant would say, ‘Alright, you guys can go home.’ I would ask, ‘Do you need anyone to stay?’ I loved going to work every day. And, and at the end of the day I was bummed because I had to leave.”

“Even when he was a sergeant, he still wanted to work the streets, work undercover,” says colleague Lisa Kolarac, of Lando who was commander of the narcotics and vice unit before coming to Frederick. “Sergeants don’t do that. But he did.”

Lando loved the challenge of undercover work. “When I was in that role, what brought me the most joy was to see how many drug dealers I could trick into selling me drugs in a given day,” he says.

Those were the good days when he felt he was keeping his community safe. But there were dark days as well, such as the day of the shooting at the Tree of Life Synagogue. And on April 4, 2009.

“I was a sergeant assigned to the Zone 5 police station in the east end of the city,” says Lando. “I was off that day and there was a domestic situation between a mother and a son. I was home watching television and there was breaking news that there was a police-involved incident.”

Lando immediately called into the station. “I said, ‘Hey, what’s going on?” he says. “And they said, ‘Paul Sciullo was called to this domestic, and now he’s not answering his phone.’”

Lando decided to reach out to his colleague himself. “I called Paul’s cell phone and it went to voicemail,” he says. “I said, ‘Paul, answer your phone. People are worried about you.’ I didn’t know at the time, but Paul was already dead. He had been shot.”

Three law enforcement officers died that day. On his arm Lando has a tattoo that marks that day and honors those officers by listing their badge numbers. “I remember riding in the ambulance when they took the officers to the morgue,” he says. “Just being in the ambulance was very tough. To see someone wearing the same uniform you are wearing, and they are on their way to the morgue.”

Despite “the two worst days of his life,” as he describes them, Lando has found hope in spending his career working to create a different approach to policing and a different way of interacting with the community.

While in Pittsburgh, Lando served as a key partner in the National Initiative for Building Community Trust and Justice by developing and leading procedural justice training for the entire Pittsburgh police department, which included 1,000 law enforcement officers.

Or interacting with young teenagers. That was the objective of Youth Connections, a program Lando started in Pittsburgh to build relationships between police officers and young people in underserved communities.

Through the program, police officers went to schools and ate lunch with selected students. “These were young people who just needed a little extra support, a little extra mentoring,” says Staci Ford, a trauma specialist who assisted Lando in identifying young people at risk.

The law enforcement officers participating would not wear their uniforms during the meeting. But, during the meeting, they would reveal themselves to the young participants after the two had spent time together and gotten to know each other. There were also role-playing activities where roles were reversed with the young person becoming the law enforcement officer to provide a different perspective.

Ford recalls one young man who “was getting into trouble,” she says. “He actually reached out to Jason. And this was a young man with severe trust issues when it came to law enforcement. And Jason was there for him.”

Kim Stanley, a community resource officer who worked with Lando in Pittsburgh, recalls the murder of a mother, the result of domestic violence. “He asked us to reach out to the grandmother who now had custody of the kids and see if they needed anything,” she says.

“They didn’t have a lot of money and didn’t even have nice clothes to wear to their mother’s funeral,” says Stanley. “We went to Jason and said, ‘Look, here’s the problem, boss. This family, they are good people. And they’ve had a horrible shock. What can we do?’ And he found the money for us to be able to take them to the store and get them clothes for their mother’s funeral.”

He is bringing those experiences to his new role as chief of the Frederick Police Department.

“I think what stood out about Chief Lando during the interview process was the sincerity of his views about policing and the role of community policing,” says Frederick Mayor Michael O’Connor.

After joining the department, Lando wasted no time. An early initiative was reaching out to the community. He has met with representatives and members of the Black community, Hispanic community, Asian community and the LGBQT community. As a member of the LGBTQ community himself, Lando believes that he has a unique perspective on marginalized groups; he and his partner have been together for 18 years. Lando also placed liaison officers in these communities to help build familiarity and trust.

While he is glad to be in Frederick, he does admit his initial exposure to the city was, well, not ordinary. He was barely on the job last April when a gunman shot two people at a business park before driving to Fort Detrick, where the shooter was fatally shot.

“That’s not a call that you ever want to get, but certainly not a call you want to get in your first three weeks as the police chief in a city where you have barely met the officers,” says Lando.

But he was impressed. “I joke around and I say that I take no credit for what happened that day,” he says. “Because by the time I figured out where it was and how to get there everything was under control, and everybody did exactly what they were supposed to do. There is no greater feeling as a supervisor or a leader than that.”

He remains impressed as he continues to know his officers and staff. He has met with many of them and is currently learning their first names—all 200 of them. “It matters,” he says.

In other initiatives since becoming chief, he has created a pilot program for a Crisis Car, which pairs a non-uniformed police officer, a civilian mental health professional and an EMT/paramedic, responding to mental health emergencies. And a new police headquarters should be completed in 2023.

As he enters the next phase of his law enforcement career, Lando does so with great anticipation.