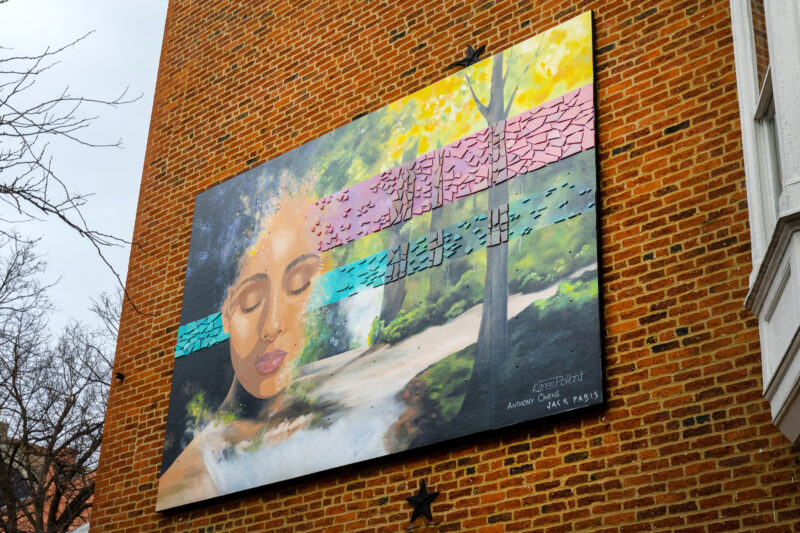 Walking through Downtown Frederick, Kevin Lollar offers a tour of the area’s murals, old and new. It was a decade ago that Lollar, executive director of the Housing Authority of the City of Frederick, first teamed up with artist Jack Pabas and contractor Anthony Owens, who created The Sun and the Moon and Lord Nickens murals in the federally supported Hope VI neighborhood between North Market and North Bentz streets.

“We’ve gone from the fantastic of The Sun and the Moon to the ideal with Lord Nickens,” Lollar says.

For the past year, the trio has been working with artist Karen Pollard of Vienna, Va., to create two new murals, one on South Market Street and one on South Bentz Street. “This is more of a meditation, our connection to nature,” Lollar explains of the new murals that decorate the side of the Federated Charities building at 22 S. Market St. and the Lincoln Community building on South Bentz Street. 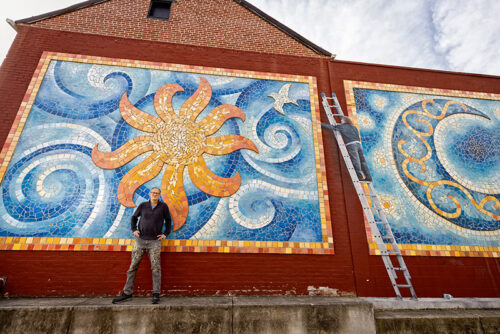 Awareness of Being depicts a woman meditating with her eyes closed. She is surrounded by images of nature, trees lit by golden sunlight, leafy green plants and blue sky in the background. Blinding sunshine peeks through an opening, framed by dark brown tree trunks. The woman seems to be absorbing the life around her into her being through her closed eyes and honey brown skin.

This mural is visible to drivers and pedestrians as they travel north along South Market Street toward Frederick’s square corner. Focused Intention depicts a man also surrounded by trees imbued with sunlight, framed by a circle that morphs from shades of red to blue. But it’s his mind that draws you in. Images of the sun, the moon and stars illuminate his brain, and his thought waves appear to emanate outward.

“My goal is to paint a feeling of inner peace,” Pollard says. “I do that by showing meditative connections to nature and the gratitude of nature. The miracle of gratitude is that it shifts your perception so it changes the world you see. Paradise is a state of being.”

Lollard wanted to bring the project to the people in the housing communities he serves as well as all of Frederick. “These murals represent hope and reassurance, and I think the Housing Authority embodies that same message,” he says. “We are a practical lifeline of those same sentiments, that there is always hope.

“I’ve tried to make us more accessible, more reachable,” he adds. “Some of the time at the Housing Authority, we are dealing with people’s problems. But we’re here to solve problems, to recognize and be recognized.”

He’s excited for the murals to become a part of the landscape of South Frederick. “Art makes you feel things,” he says. “Art is a way to show people the potential of themselves and their home.”

Lollar came up with the idea of murals for the Hope VI neighborhood after the demolition of the old John Hanson Apartments. “We created a street and exposed two walls,” he says. Lollar thought the massive brick walls made an ideal canvas for public art. 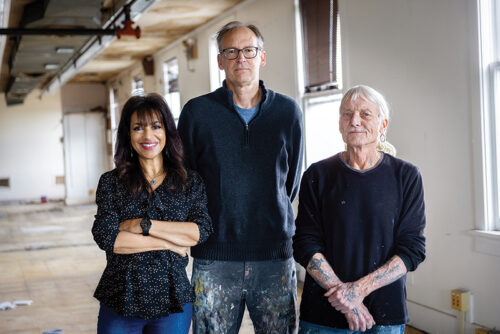 “Tony’s son used to work for me,” Lollar says. “I found out he did mosaic work. We did a call for artists, and Jack came up with this whimsical idea of the sun and the moon.”

When Lord Nickens, a stalwart of Frederick’s African American community, died in 2013, Lollar decided to honor Nickens with a mural on the side of the Bernard W. Brown Community Center.

Owens nicknamed the trio creating the murals the “Three Amigos.” The three worked during the past year during the renovation of Catoctin View Apartments. Pabis created murals for each floor, using different color themes. To match the murals, Owens created square mosaics painted in the theme colors of each floor.

“Tony’s using scrap tile pieces to create those mosaics,” Lollard says. In fact, Owens uses tile scraps on all the murals. “These aren’t fancy,” he says. “These cost $1.99 per tile at Home Depot.”

The tiles give a three-dimensional feel to the murals, and they’re used to highlight the meditative poses of the newest murals. The tiles pieced together by Owens and murals painted by Pabis also came together in the shape of mourning doves that appear to fly across Lord Nickens. Similarly, eight newly tiled doves adorn the freshly painted Catoctin View Apartments. “One of the birds is 95-feet high,” Owens says. The work required standing in a bucket truck for hours at a time.

When envisioning murals for the new project, Lollar reconnected with Pollard, a friend from his high school years in Washington, D.C. A web designer/graphic designer now creating fine art full time, Pollard recently put together a book of paintings in her meditation series, and Lollar was intrigued. “Then I saw some of her work on Facebook,” he says. “I asked her if we could do murals from her meditation series.” 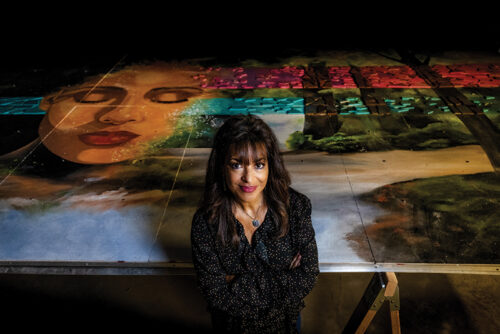 She agreed, except there was one problem. “Karen doesn’t do heights,” Lollar says. “I knew Jack and Tony would, so we started this mural project a year ago.” From Pollard’s gallery-sized paintings, Pabis re-created the images on cement boards, working on large, flat platforms in a converted warehouse. The 10-by-14 mural at Federated Charities is painted on 10 cement boards, while the 10-by-10 mural for the Lincoln building is painted on six boards.

The boards are mounted onto frames bolted into the mortar of the buildings so it would not damage the brick. This was necessary to meet city and Maryland Historical Trust guidelines required for the Federated Charities building.

Although Pabis re-created Pollard’s Awareness of Being, Pollard touched up the woman’s meditative face. “It was important to me to have her facial expression right,” she says. “She has to look serene and calm.”

The plaque that accompanies the mural accentuates this with a description that Pollard wrote: “Immerse yourself in the beauty of nature, smell the rain and feel the wind. Open your soul to love and charity.”

The woman’s lips seem relaxed. Trees appear to sprout from her closed eyes and rectangular stripes of teal and magenta extend from her face. It’s those stripes that Owens accented with pieces of tile that give the mural a 3D effect. The murals are complex, Owens adds. “The idea is you have to come back and look at it a second and third time,” he says. Hidden among both murals, are the initials of children close to the artists. 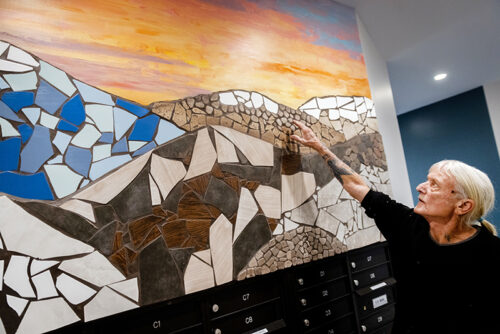 The sharp edges of the tiles encircling the subject’s head in Focused Intention point outward, representing energy radiating out from the meditative figure, Owens says. The man’s head is slightly bowed and his eyes are closed. His brain is illuminated, with no hair hiding his head. “I don’t show hair,” Pollard says. “Hair brings in all kinds of ideas of who the person is.” Instead, she adds, his thoughts represent the universe, “which we all carry within.”

On the accompanying plaque are Pollard’s words: “Be still, the universe is within you. It responds to your intentions. Open yourself to inspiration and possibilities and become who you were meant to be.”

Elin Ross, executive director of Federated Charities, is excited about hosting Awareness of Being. “I think one of the things that is incredibly powerful about the Federated Charities building is its location in the heart of Downtown Frederick,” she says. It not only serves the member charities, but all those who live or visit Frederick, and the mural helps to keep the distinctive building, known for the dog statue that greets passersby, interesting.

The mural, she adds, is a way of reminding locals and visitors of the diversity of people in the community, including the diversity of those served by Federated Charities. “But it also reminds people that we still have work to do.”