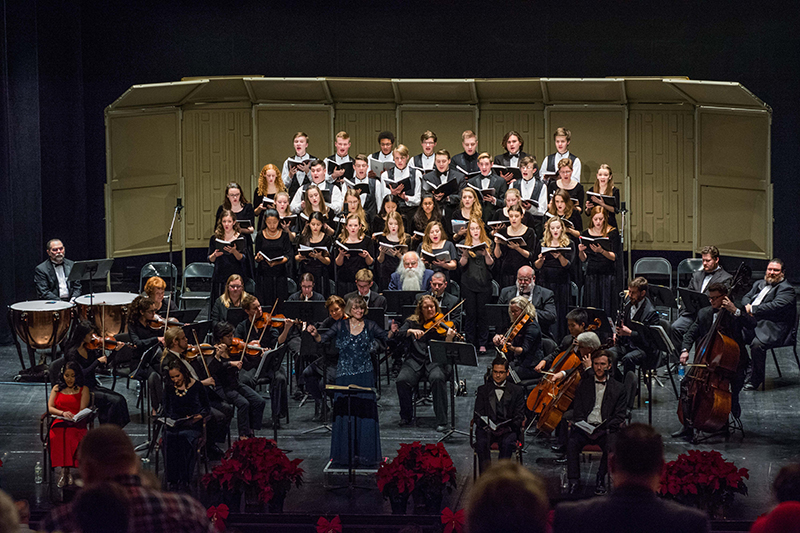 Sing-Along Returns to Stage and Audience

For Allen Maples, it was an annual tradition he shared with his father, Sam.

“We went to have that evening together,” Maples says of attending the Frederick Children’s Chorus’ annual Messiah Sing-Along at the Weinberg Center for the Arts. “I would get tickets and pick him up, especially during the later years when he was wheelchair-bound and take him. We would sit in the front row and just enjoy being there.”

His father never missed a performance until he passed away a few years ago; in fact, he had been attending even before the son began accompanying him. “My dad was a long-time singer,” says Maples. “He was in the Frederick Chorale for many years and loved to sing. So, the Messiah Sing-Along was just a natural outgrowth of that, which he then passed on to me.”

The Messiah Sing-Along has touched many lives since its start in 1994. “It has become an institution in the Frederick community,” says Syndi Huth, president of the board of directors for the Frederick Children’s Chorus. Her own child participated in the program and the sing-along. 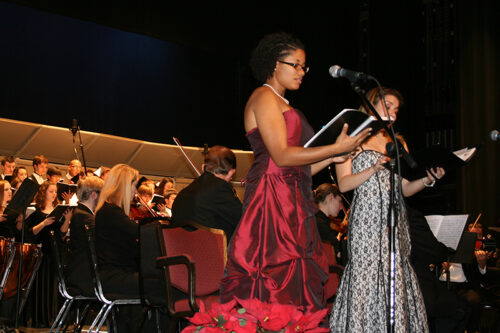 The annual performance of Handel’s Messiah, to be held this year on Dec. 21 at the Weinberg Center, consists of a 40-voice chorus, a 20-piece professional orchestra and four high-profile soloists. Bass-baritone Adam Cioffari, for example, recently returned to the Pittsburgh Festival Opera as Fasolt in Das Rheingold and Judge Turpin in Sweeney Todd.

The performance is conducted by Judy DuBose, artistic director, who founded the Frederick Children’s Chorus more than three decades ago. Her organization is an independent, audition- free program that has developed countless accomplished musicians—and something more.

Like the Messiah Sing-Along. The chorus group for the performance includes students from the children’s chorus who have reached the highest level—the high school-age chamber singers. But learning Messiah is not an easy task, says DuBose.

“They struggle to learn this the first year they are in the high school ensemble,” says DuBose. “It’s really hard and they are ninth-graders. Babies, really. They’re still learning how to read music with accuracy. Something that some college students don’t know how to do. I’m asking it of ninth-graders.”

But well worth it.

“What happens over the next four years is they become so familiar with it,” she says. “By the fourth year, many of them are singing it off-book. They have the music open but they’re standing there turning pages and rarely looking down at the music.”

The audience is encouraged to participate as well, coming together as a community to raise their voices in song on such selected choruses as For Unto Us a Child is Born, Worthy is the Lamb, and, of course, Hallelujah. 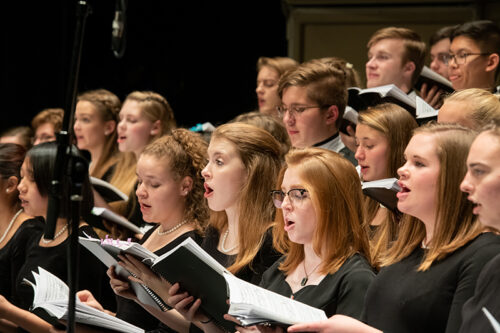 “It’s an interesting way to enjoy Messiah,’” says Stanley Cornett, a professor of voice at the Peabody Institute who assists DuBose in selecting soloists each year for the performance. “It’s almost visceral because you are singing it yourself. You are a part of it.”

Marj Berkheimer agrees. A former music teacher at Middletown Elementary School for 43 years, Berkheimer has been attending the sing-along since 1995. Initially, “I went to see some of my former students perform,” she says. But she kept coming back.

Berkheimer arrives to the performance prepared, year after year, with her own tattered and beloved copy of the Messiah libretto. It’s her copy from when she sang Messiah as a member of the Hood College Chorus. “It’s literally falling apart and the price tag on it says $1.50,” she says. “I wouldn’t give it up for anything.”

Messiah evokes strong emotions for her. “It’s such a powerful piece of music,” she says.

And that can be true whether one has been singing along for years or has just come to the experience lately. Julie Gaver will be the first to admit that she does not consider herself a singer. But she soon discovered that that didn’t really matter when she attended the Messiah Sing-Along for the first time in 2018. “I sat at the back of the theater so no one could hear me screeching,” she says with a chuckle.

But then, “The first time the lights went up and everyone stood to sing, something happened,” she says. “There were really good singers sitting behind me. I’m talking opera-like vocalists. And when it was time for all of us to sing, they let it rip.”

They were not alone. “I was overcome with emotion, and I let it rip too,” says Gaver.

As the voices joined together Gaver came to a realization. “No one could hear me with my bad singing voice,” she says. “There was only a collective mass of beautiful voices, praising, singing and celebrating this most special time of the year.” 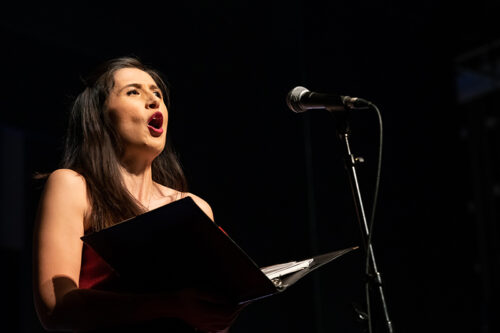 That was the idea, says DuBose, when she decided to create the sing-along event. “I have tried to provide a memorable experience for those who are attending for the first time as well as those who keep coming year after year,” she says. During the performance she will talk with the audience and recognize long-attending participants during the performance. Sam Maples, for example, always received an acknowledgement from her.

For Doug Remsberg, who plays the clarinet and is a long-time member of the orchestra, the Messiah Sing-Along offers a respite from the hectic holiday season and all it brings.

“There’s all the hustle and bustle and so much going on,” says Remsberg, who is from Middletown. “Judy does this just right before Christmas, and it’s like a transition point. You’re transitioned from all the stuff that’s going on—the commercialism or things that aren’t necessarily the true meaning of the holiday. Then you’re here at this event in Downtown Frederick and it is just beautiful.”

“It is a time to reflect,” says voice professor Cornett of the piece composed by George Frideric Handel in 1741 and associated with the holiday season all around the world. Adding, “It gives a sense of unity and coming together, which of course we don’t have much of these days.”

That coming together means much to the Frederick Children’s Chorus family, including numerous past students who have gone through the program and then attended the sing-along in the audience, sometimes bringing families of their own.

Jenna Lebherz Daly, for example, has been a student of the program, a singer in the sing-along chorus, a mezzo-soprano soloist and an audience member. At her solo performance in 2019, her 3-year-old twin daughters, Lorelei and Roxanna, were in attendance. Lorelei especially took to the music.

“My dad was holding Lorelei on his lap,” recalls Lebherz Daly. “And there’s Lorelei in her beautiful dress conducting and following Judy’s arms as she conducted. It was really adorable.”

It was a special moment for Lebherz Daly, who now teaches music to children herself. Her two sisters, Maggie and Hannah, participated in the children’s chorus, as well. She says the three sisters especially have fond memories of learning Messiah. “We would practice in the car, doing three-part harmony,” she says. “Our parents loved it.”

And now, apparently, so do her own children. “I can’t wait to take them back,” she says. 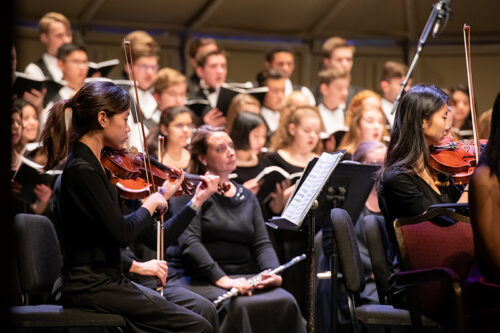 That sense of community resonates throughout the Frederick area. Lee DuBose Fuhr, Judy’s daughter and executive director of the Frederick Children’s Chorus, grew up with the Messiah Sing-Along. Which proved quite beneficial at times.

“One year on the day of the sing-along my mother called me up and said, ‘The mezzo is sick,’” recalls Dubose Fuhr, who was by then a mother herself. “’Can you sing tonight?’” Adding, “She said, ‘You might want to brush up on the music,’ and I said, ‘The music isn’t the problem. I’m going to have to find a dress that fits. I’ve had four children.’”

DuBose Fuhr hurried to the Macy’s in Frederick.

“It was four o’clock in the afternoon, and I was supposed to be at the Weinberg at six and here I was picking out a dress to sing in,” she says “And here’s the funny part. The clerk that I purchased the dress from also sold the dress to the soprano soloist who would be performing with me that night. And even funnier than that, the clerk who helped me and sold me the dress was a chorus alum, too,” says DuBose Fuhr. “You can’t get more hometown than that. It’s a classic hometown, small-town moment. But with world-class music.”

Besides being a staple of the holiday season and filling the Weinberg with hundreds of guests each Christmas, the sing-along also serves the purpose of being an important, if not the most important, fundraiser for the Frederick Children’s Chorus. The event made $35,000 for the program in 2019.

And after a year with no Messiah Sing-along due to COVID-19—the first time it was cancelled—the event is back this year. For the 26th time.

Allen Maples plans to be there in honor of his father and their special time together. “I know he will be smiling down on me,” he says.

And, no doubt, singing along as well.