During the holiday season many people decorate their front doors with wreaths, cover the bushes and trees in the front yard with bright, sparkling lights, and maybe even add a nativity scene or an inflatable Santa or Grinch on display in their front yards.

Then there is Jason Matusiak of New Market. He takes the idea of celebrating Christmas to a whole other level. Matusiak doesn’t just display Christmas decorations; he designs and builds them himself. 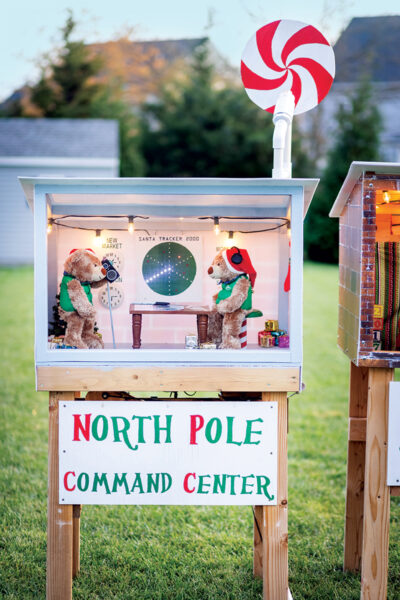 And a visit to the home he shares with wife, Michelle, and their two children is to discover a yuletide wonderland. There is a dispenser that provides free candy canes, a Christmas hand crank that can determine one’s Christmas spirit from “bah humbug” to “merry and bright,” a holiday hotline with a red phone and special messages, and display boxes with moving parts that include Mrs. Claus’ bakery, Santa’s toy shop and the North Pole command center.

“Yeah, we like Christmas,” says Matusiak with a grin.

And so do those who come by the house at 515 Isaac Russell St. in New Market to see and experience the sights in his front yard.

“It’s our staple for ‘let’s drive around and look at Christmas lights’ drive each year,” says Melanie Nicholson of Mount Airy who enjoys coming by each year with her husband and young daughter.

The idea of creating one’s own Christmas decorations and displays is in many ways a family tradition for Matusiak; his great-grandfather also made displays, which he recalls visiting during his childhood. “I remember just really liking the mechanical aspect of it,” says Matusiak, himself an electrical engineer.

When he finished college and started his career, Matusiak started toying with the idea of creating his own Christmas decorations and displays.

“I started with a countdown sign back in 2005,” he says. Initially it was supposed to be a small item that could sit on his desk at work, counting down the days until Christmas. “Then, somehow, that turned into this 8-foot countdown [sign] for the front yard,” he says. 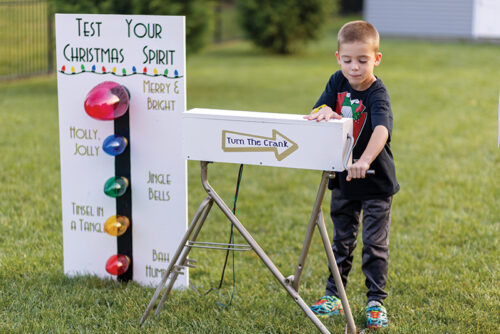 From there, he decided to create a lighted display with two snowmen engaging in a back-and-forth snowball fight. “I had always wanted to try welding and make a metal frame,” he says of the two snowmen.

By this second project Matusiak had found his passion, and he wasn’t alone. Michelle Matusiak is also a great lover of the holiday. “I just have so many wonderful memories,” she says of her own Christmases growing up.

In fact, they were so taken with the holiday that their wedding song was Neil Diamond’s You Make It Feel Like Christmas, even though they were married in October 2007. Then came along the two little Matusiaks, daughter Noel, now 9, and son Joe, 5. Noel, of course, was named for the Christmas season. “We always say to her at Christmas, ‘Look, your name is everywhere,’” says Michelle Matusiak, smiling at her daughter. 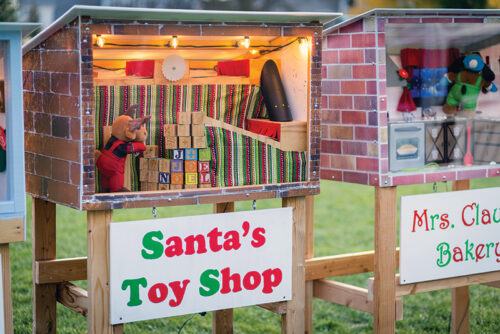 As the children have grown, the Christmas decorations and displays have become a family affair. Noel and Joe often report for duty when the candy cane dispenser, which Jason built repurposing a vending machine motor and its spiral dispenser, is running low. A camera inside the family’s home enables the two children to monitor how much activity the dispenser is receiving and whether it needs replenishing. Which is often. Last Christmas the family handed out 450 candy canes.

“My friends say that is their favorite,” Noel says.

Besides the dispenser, the decorations also include the three display boxes that are all mechanical. Santa’s toy shop, for example, involves a rough cut of wood being turned into a cube before becoming a painted toy block. The process moves along by way of a conveyor belt with Harris the Moose overseeing the operations.

There are personal touches within the display boxes, as well. Mrs. Claus’ bakery has recipes attached to the kitchen wall with titles such as Margie’s Chocolate Chip Cookies in reference to a specific family member and recipe. 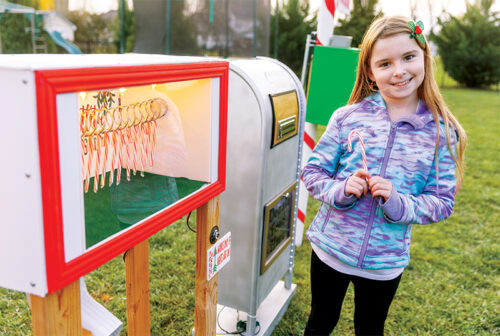 While the displays and decorations provide joy to countless people, the family takes the spirit of giving during the season one step further. There is a special mailbox for letters to Santa that not only takes letters for the jolly old man but also provides a place to leave food goods for the needy. Last year the family collected 227 pounds of food and delivered it to the Greater Urbana Area Food Bank.

But Christmas doesn’t end when the season does for Matusiak. It is an around-the-year activity, as he collects all things Christmas. “I’m really interested in the history of Christmas,” he says.

He has collected books and magazines, some from as far back as the 1800s, that reference the current depiction of Santa, such as the images drawn by cartoonist Thomas Nast for Harper’s Weekly beginning in 1863.

“One of my favorites is my 1812 copy of Washington Irving’s satire history of New York,” says Matusiak. “This is his second edition because that is when he first mentions Santa flying through the air in a wagon to deliver gifts.”

Other items from more recent Christmases include a signed photo of Ed Asner as Santa in the movie Elf. “To me, he was the best of the Santa actors,” he says.

Matusiak also purchased a 45-rpm record on eBay of the song I Want a Hippopotamus for Christmas by Gayla Peevey. He reached out to Peevey to sign the record and she agreed, sending him back a letter that included hippopotamus paper clips.

And, of course, among his collectibles is a replica of the leg lamp from the iconic movie A Christmas Story. The movie is one of his personal favorites and he and Michelle have even visited the house where some of the movie was filmed. His website, which lists his Christmas projects and details on how he created them, is even named FRA*GEE*LAY Industries from the scene where Ralph’s father receives his “special award,” the leg lamp.

Speaking of awards, Matusiak has won one of his own. His Christmas countdown display finished first in a competition run by Avnet, a large electronics distributor.

“My collection, that is for me,” he says. “Nobody is coming by to see that. But the outside decorations, they make people who see them happy. They make the people in my neighborhood happy. And that makes me happy.”

After all, ‘tis the season of joy.