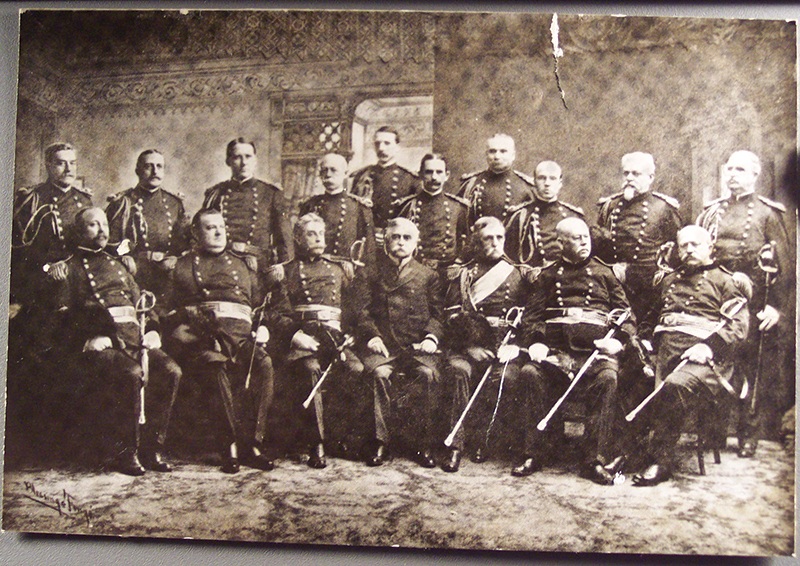 Louis Victor Baughman was a Frederick native and member of the military staff shown in this 1906 photo. Based on individual photos of Baughman, he is believed to be on the far left side of the photo, either standing or sitting.

Baughman was born in Frederick on April 11, 1845, and at only 16 ran the Union blockade of southern ports to join the Confederate Army. He was a man of varied talents, starting his career working for a steamship company before reading law. After their father died, Baughman returned to Frederick and helped his brothers run the family newspaper, The Frederick Citizen, which staunchly supported the Democratic party. Soon, Baughman entered politics himself and after an unsuccessful run for Congress, he became the Maryland comptroller of the treasury. The “little Napoleon of Western Maryland” was a key figure in the state’s Democratic party.

After serving on the staff of Gov. John Walter Smith from 1900 to 1904, Baughman was elected chairman of the state commission to the St Louis World’s Fair. After the death of Sen. Arthur Pue Gorman in 1906, Baughman became the Democratic National Committeeman, representing Maryland in the Democratic National Convention. In 1906, Baughman declared his intentions to run for governor, but poor health forced him to resign and return to the family farm, “Poplar Terrace,” where he died on Nov. 30, 1906. Baughman is buried in the family plot in St. John’s Cemetery.