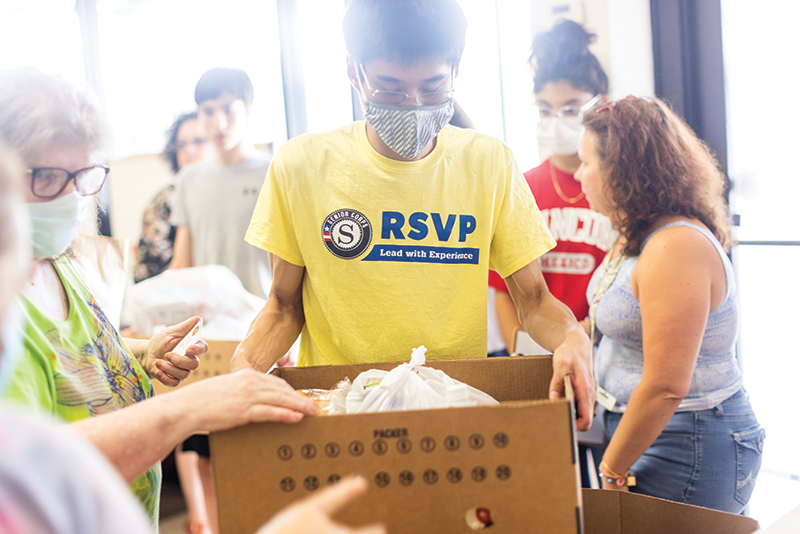 When COVID-19 hit the area in March 2020, many were suddenly faced with job loss, diminished hours and loss of income. Hard decisions had to be made in paying for housing, food and other expenses. “Food insecurity quickly became a community issue that we needed to address,” says Elizabeth Y. Day, president and CEO of the Community Foundation of Frederick County.

In response to the pandemic, the Ausherman Family Foundation began weekly video conference calls with area nonprofits like the Community Foundation to discuss the immediate needs of the community. Food was one of the largest concerns, especially for people who had never faced hunger before. Many nonprofits, even those traditionally not focused on food, began hosting food drops and giveaways, but that wasn’t always the most efficient answer.

“What we recognized was that, without knowing it, the nonprofits in their triage of trying to get out as much resources as possible were duplicating efforts and feeding the same neighborhoods,” says Leigh Adams, Ausherman Family Foundation executive director. They also found areas inside the county that were underserved. After sharing information, the nonprofits began to see collaboration take shape.

That was the birth of Feeding Frederick, a hunger initiative that provides an up-to-date map of free food resources in the area. A website provides a variety of information, including address, hours, requirements, eligibility and duration. Partners in the program included the Ausherman Family Foundation, the Community Foundation and Frederick County government. Created over several months by the county, the map also lets community members know where they can volunteer and donate and which nonprofits are working to address food insecurity locally.

“The goal is that, as a community, now we have this one central place that we all promote together for anyone that is experiencing food insecurities,” Adams says. “They know that they can go to this website and this website has the commitment from all these food providers that they will update it and it will be in real time of where they can go.”

Launched in the summer, the website has seen a steady increase in traffic. In July, the map was viewed 488 times. A month later, as a marketing campaign began to take off, the map was viewed 1,012 times. For those who have limited to no access to the website, the marketing campaign includes signage on area buses as well as reaching out to faith-based organizations and local community leaders in the various municipalities to get the word out.

More than 35,000 Frederick County households, or 37 percent of the population, can’t afford basic needs such as housing, food, childcare, transportation, healthcare and technology, according to the 2020 Asset Limited, Income Constrained, Employed (ALICE) report. ALICE households have residents with incomes above the federal poverty levels but struggle to afford basic necessities. 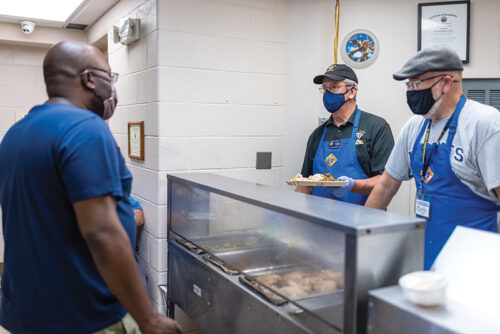 The county is also home to several food deserts—areas where low-income residents have little access to stores selling healthy and affordable food. Feeding Frederick aims to expand awareness, but not direct food availability, in these communities. “The campaign itself is not to create new opportunities for feeding,” says Monica Bearden, Frederick County Deputy Chief Administrative Officer. “It is to be able to get people connected to what exists.”

Frederick County Public Schools has around 44,000 students with over 12,000 qualifying for free or reduced meals. The Frederick chapter of the nonprofit Blessings in a Backpack helps to feed around 3,300 students in 27 schools with those locations marked on the map on Feeding Frederick’s website.

“For a family to be able to go to a website and find out where all the resources are available to them, [it] is vital to them,” says Angela Abrishami, program director for Blessings in a Backpack’s Frederick chapter. “If you go to various counties around our area, trying to find the various resources available to you is painful and it is frustrating and sometimes [people] don’t want to verbally ask. There is a pride issue there. There could also be a language barrier. Being able to have a website that is a one-stop shop with all the resources that you and anyone in your family have available to them, it is vital … vital to their success and in a lot of cases [to] their survival.”

Elizabeth Chung, executive director of the Asian American Center of Frederick, has noticed a consistent need for food from individuals served by the nonprofit. Her organization offers a food assistance program that serves about 200 families from all over the county.

The county government’s food distribution program to older adults grew about 600 percent during the pandemic, according to Frederick County Executive Jan Gardner. Some residents were concerned to leave the house to go grocery shopping, or they lacked transportation and did not have a family member close enough to help them. “Food assistance happened in a lot of ways, and we really felt that we had to try to make an extra effort so that people who needed help could find it,” Gardner says.

Abrishami notes: “Food insecurity has been around forever. It is not something that will be solved overnight. Unfortunately, this pandemic has just made it grow exponentially.” During the first week of October, two more county schools reached out to her asking to be added to Blessings in a Backpack’s distribution list. “If we could feed every kid in this county today, we would but we just need the funding to do so and that is our goal,” Abrishami says.

Besides the website, a new position was created at the Frederick Rescue Mission to better coordinate food distribution to partners throughout the county. Valerie Moore was named manager of Frederick Organizations Optimizing Distribution (FOOD) program earlier this year.

One of the toughest parts of her job is getting organizations in smaller towns throughout the county to be a part of the website. Sometimes it is hard to figure out which local group is doing a food drive and finding the correct contact person. Some people are not computer savvy, so they don’t want to get involved. Moore is trying to convince them to see the value in the partnership and it can be an important resource for everyone.

Community organizations and nonprofits continue to meet bi-weekly to discuss how to make Feeding Frederick better, including taking in feedback from users. “We were excited to be a part of this because the Community Foundation has three strategic initiatives and one is supporting families with children,” Day says. “We were hearing families with children were the hardest hit when it came to how do you feed your kids? How do you feed your household? We all know that food is a building block for a better life because without food your health declines. If your health declines, you can’t work or you can’t study and if you can’t work or you can’t study you can’t be successful.”

Bearden hopes people take away from the website an understanding that Frederick is a caring community. “We want our neighbors to be well and healthy and safe,” she says. “We don’t want our neighbors to feel food insecure. There is absolutely no stigma attached to needing food. You have to provide for yourself, and your family, and the community wants to be able to help you do that.”