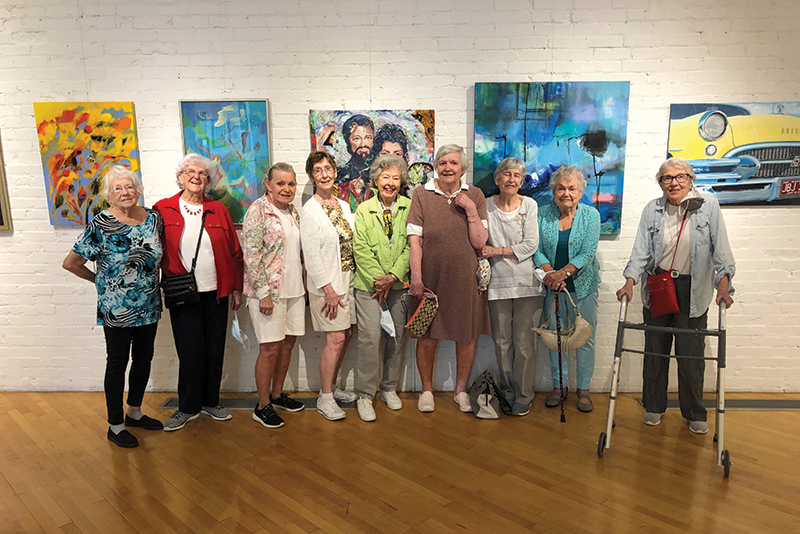 Starr Myklebust recalls taking an art class at  Frederick Community College years ago when her children were young. But she quickly realized that oil paints and kids didn’t mix, so she turned to other forms of art to satisfy her creativity bug. She used watercolor. She made posters. Even her bulletin board designs at the school where she taught drew compliments and admiration.

Now that her kids are grown and she’s retired, Myklebust, 79, of Frederick, has more time to create, including with oils. Although she has some trouble seeing, as her depth perception has weakened with age, she still paints and draws. Sometimes her work reflects how she currently sees the world. “I see blurry, I’ll paint blurry,” she says. “It sort of looks Monet-ish.”

Painting gives her the opportunity to interpret the world on canvas. For the Over 70 Art Show at the Delaplaine Arts Center recently, she painted an acrylic scene of “Bridgette, our rescue dog” in a bush from an old picture she unearthed. Another recent painting is a “romanticized version of the house we lived in for 35 years. I like it because of its memories.”

Painting allows her to explore those memories. She does this regularly through a Friday morning Guided Personal Directions class at the Delaplaine. These classes, taught by illustrator John Kachik, draw mostly older people, although there’s no age limit. “It’s an eclectic group of females and a few males,” Myklebust says. “We all interact and enjoy each other’s company.”

“It’s a healthy social outlet,” Kachik says. He should know. His 91-year-old mother takes his class. “She raised five kids, worked her whole life and didn’t have a big social life,” he says. “Now she has best friends there and she sends them cards and letters.” 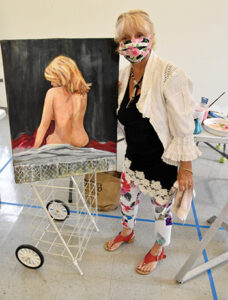 For some of his students, art is something they’ve always wanted to do but never had the time. The retired anesthesiologist raised in Pakistan wanted to be an artist, but her parents pushed her into medicine. She is finally satisfying her urge to paint. “A lot of them dreamed of being artists, but they weren’t given the chance,” Kachik says.

Others are exploring their creative side for the first time. The class, ongoing for 11 years, has retired teachers, scientists, even a retired librarian. “I work with them wherever they are,” Kachik says. The students inspire each other, as well. “Everyone who’s done the class becomes better at painting, sculpting or drawing, or whatever their art is,” he says. “They’re people who always wanted to do art.”

Those who meet the age requirement enter the Over 70 Art Show, which goes on display at the Delaplaine each August. “That month is set aside as Creative Aging Month,” says Corey Frey, exhibitions manager at the gallery. This year, 120 paintings, sculptures, photos, collages, jewelry and other types of artwork were entered, with works ranging from traditional to abstract.

“All skill levels are involved,” Frey says. One striking piece was a glass mosaic portrait of a Basset hound named Benny. Another was a colorful rendition of a 1950s Buick by Robert Dawson. Chrome panels gleamed, and the car’s massive, bright yellow hood dominated the foreground.

Carol Wilks, of Boonsboro, entered a painting of Plymouth Rock, although much of her work involves animals. A retired Bechtel engineer, she discovered she had talent more than five decades ago when she drew a horse while her baby daughter was napping.

But life got in the way. Wilks had two kids, a husband who traveled and a career, then she divorced and remarried. Later, she looked after her grandchildren when they were young, only painting in her spare time. Then, in 2005, she moved from Gaithersburg to Boonsboro and joined Hagerstown’s Valley Art Association. “I looked at their work, and I thought I could never do that.” 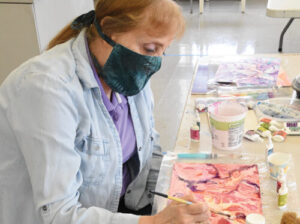 But she began taking workshops, and she found she could. Animals are her specialty, and she has painted many endangered species through a workshop in Kalispell, Mont. “The process of creating isn’t easy,” she says. Each year, she enters a piece in the Delaplaine show. She also teaches art to other seniors, with students ranging in age from 60s to 90s.

Country Meadows Retirement Community provided 13 pieces for the show, including a butterfly, the sweet face of a Labrador retriever, Frederick’s famed Clustered Spires, cats, a cardinal, a swing over a pond and a lighted candle in a window with snow falling outside.

“We’ve actually had a very vibrant art program for the past several years,” says Melanie Long, director of Dynamic Living at Country Meadows in Frederick. Residents of independent and assisted living take part. “It’s amazing to see.” Art therapy is a key part of the Dynamic Living program, she says.

“Art can improve your mental health,” Long says. “For these residents, it’s a chance to express themselves and feel good about who they are.” Classes were canceled at the start of the COVID-19 pandemic but started back up again in spring. “They missed the connections,” Long says. For many residents, doing art helps residents forget physical pain and boosts their mood.

“It’s a fun, casual, social way for them to come together,” she says. Anyone with an interest in art is welcome. Talent isn’t necessary. Long often displays the artwork on easels in hallways throughout the retirement center. The pieces serve as conversation starters for the residents.

The Alzheimer’s Association’s Partners in the Arts program benefits patients and caregivers alike. Linda and Jack Welsch, of Frederick, take the art classes together through the Delaplaine Center. Classes were canceled at the start of the pandemic but have been revived on Zoom for patient/caregiver couples who work on the projects together. 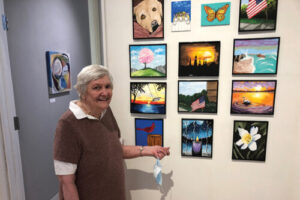 “My husband really enjoys it,” Linda Welsch says. Supplies for the quarterly classes arrive via mail, and tissue flowers made in the June class were displayed in August at the Delaplaine. In February, the class made valentine cards. After each Zoom session, Linda notices how much Jack’s mood improves. He was proud of the tissue flower he made, which Linda says was better than hers.

A retired accountant for a large company, 72-year-old Jack was diagnosed with Alzheimer’s about five years ago. He has become very quiet, but working on the art project brought him out of his shell, Linda says.

“He kept going up to the counter and looking at it,” she says. “[Those with Alzheimer’s] still want to feel a sense of accomplishment. He’s so, so proud of himself when he can do something. It’s hard, because every day, some part of him fades away, and when we do this project, it makes him smile.”

Virginia Warwick teaches the class. “I’ve seen the benefits in my students,” she says. “[Art] uses a different part of your brain.” For her Zoom instruction, Warwick uses two cameras, one that shows her speaking while another focuses on the project.

Megeen White, program manager for the Alzheimer’s Association’s Greater Maryland chapter, says that the organization’s two art programs, the Delaplaine program and another class taught by artist Carol Dana, reach 124 people across the state. “The hope is that some of these activities stimulate their brains and enhance their ability to communicate,” she says.

The virtual programs have allowed the chapter to reach more people than in-person classes, White says. Each grant-funded Delaplaine class provides materials and instruction for 20 to 24 people. However, there are always more people wanting to take the class than there is space, she says. “We’re constantly trying to reach more people,” she says.

Even for those not affected by dementia, seniors and art go together. The Delaplaine’s former CEO, Catherine Moreland, created the Over 70 Art show around 2000 after her grandmother moved into assisted living. “She never painted in her life—until she moved into assisted living when she was around 70,” Moreland says in an email. “Painting became a key part of her life and kept her active, engaged, curious and happy for many years. I inherited her paint box.”