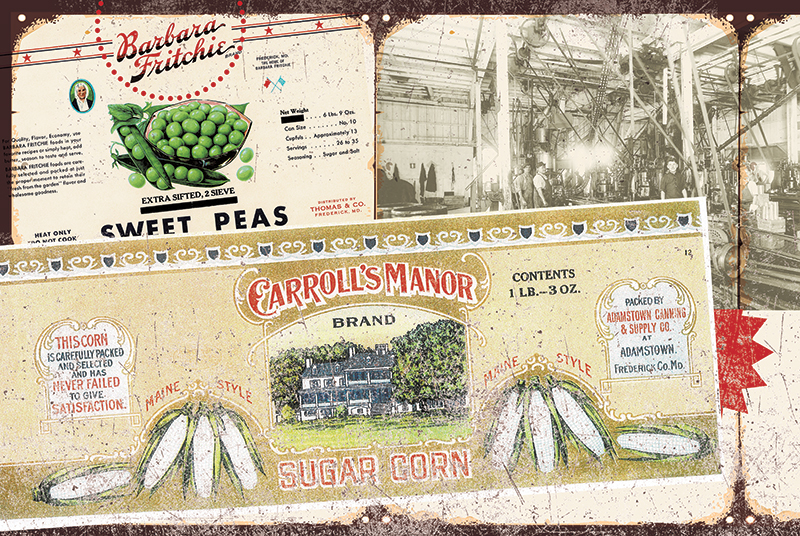 Just a short walk from the HOA-regulated housing developments, ballfields, elementary school and rural vibe of Adamstown sits what was once a groundbreaking industry in Frederick County, from which products were shipped to destinations throughout the country.

There is little evidence of this industry today, other than the railroad that once served the business. Trains still rumble by, but now they carry container cars and commuters. The building that was once Adamstown Canning & Supply Company is long gone. In its place sits a modern production facility that designs and manufactures high-tech wireless components.

But anyone with a deep interest in Frederick County should know what happened here. They should know about Stephen Thomas.

By 1900, Stephen was 46 years old and had farmed all his life. Born on his family’s homestead in Adamstown, he was the fourth generation owning his farm and known as one of the most progressive farmers in the county. The youngest of seven brothers, Thomas had worked hard to cultivate the fields of his family’s 214-acre homestead on Cap Stine Road, called Pleasant Prospect, and then purchased the land himself.

The Thomas family, one of the early farming families of Frederick County, came from Klein-Schifferstadt on the west side of the river Rheine in Germany, arriving in Philadelphia in 1730 and making their way to Frederick County a little more than a decade later. John Thomas, with brothers Gabriel and Valentine, settled on acreage south of Frederick, while brothers Michael and Christian settled around Frederick City. Gabriel took title to 326 acres south of Frederick and divided the land between himself, Valentine and John.

By the end of the 19th century, Stephen Thomas and his brothers, great-grandsons of John Thomas, worked the family’s farms scattered around Adamstown and Buckeystown. These men cultivated their fields and livestock, and bought more land, turning them into some of the largest and best-producing farms in the state. These were well-rounded operations producing milk, cream, wheat, corn, oats, hay and fruit.

Across from the old Thomas homestead on Cap Stine Road was the home of J. Franklin Thomas, a farm of 225 acres and part of great-grandfather John Thomas’ original portion. Brothers Curtis and Samuel owned adjoining 185-acre farms on New Design Road—bought from their father, George—that today is a grain farm and a farm specializing in ornamental trees and shrubs. Enjoying some of the best soils of the state, these farmers used industry, improved methods and good business practices to establish thriving farms and lead the way to new ventures supporting farmers and the Frederick community.

Like his brothers’ farms, Stephen’s main crops were wheat, corn, oats and hay. He later added dairy operations, selling cream to markets in Washington, D.C. Pleasant Prospect’s pastures in the wide, flat lands at the base of Catoctin Mountain were green and lush in the spring, giving his cow’s milk a rich, yellow hue, laden with butterfat. And in the summer, his fields produced ripe, golden wheat. With his wife, Ella, and three children, he remodeled the farmhouse in which his own father had been born in 1798, put up a bank barn and added other dependencies.

But crop farming in Maryland was facing some hurdles.

Maryland farmers found it hard to compete with the scale of production in Illinois and Iowa for corn and with Kansas for wheat. At the same time, manufacturing, which began in the U.S. around the 1820s, was bursting in scale, depleting even further the labor pool upon which farming relied. In Frederick County, workers were finding jobs in flour mills, foundry and machine shops, knitting mills, and leather works.

Manufacturing also made farming increasingly more efficient, further decreasing the number of jobs available to subsequent generations. In Thomas’ father’s time, it took 250 to 300 labor hours to produce 100 bushels of wheat from 5 acres, using a walking plow and brush harrow, hand-broadcasting seed, and using sickle and flail to harvest. By 1900, it took only 40 to 50 hours to produce the same yield, using the gang plow, seeder, harrow, binder, thresher, and wagons and horses.

Stephen Thomas and his brothers recognized that farmers needed to keep pushing the envelope to improve their farms and expand markets.

Imagine you could open a can of food packed with favorite vegetables from your local farms—sweet corn, peas, baked beans. Frederick County residents could do that in the early 20th century when the Thomas brothers brought canning to Adamstown.

On Jan. 24, 1904, Stephen Thomas and three brothers incorporated the Adamstown Packing Company with capital stock of $15,000, building their cannery on Adamstown Road where the Skyworks building is now. Created by these four Thomas brothers and J. Fenton Thomas, great-grandson of Valentine Thomas, the Adamstown Packing Company ultimately expanded into Gaithersburg and Downtown Frederick, growing into Thomas & Company, including a hardware concern and a feed and grain operation in Frederick. G. Leicester Thomas and G. Frank Thomas started there and held major roles as they and the company grew.

Adamstown Canning & Supply Company, as it was called when reorganized in 1910, positioned itself in this small farming community, marrying the canning process to its supply chain, the farms. To build its cannery alongside the B & O Railroad, land was provided by brothers Samuel and Stephen and by John Thomas and, later G. Leicester Thomas, son of Curtis Thomas. In 1904, the company canned more than 120 tons of corn. The company’s plant consisted of four buildings encompassing a canning department, boiler house, kettle room, husking sheds and an office. Located on 2 ½ acres of land with a railroad switch into which the B&O entered, the company was ideally located for local farmers in Frederick County and upper Montgomery County. Good railroad transportation, which had reached Point of Rocks and Frederick by 1832, allowed them to supply northern cities and Washington. By 1910, Maryland had become a leader in the cannery business with factories in Baltimore and Frederick and in Carroll and Baltimore counties. The state’s canneries produced 46 percent of all tomatoes packed commercially, 9 percent of the corn and 6 percent of the peas.

In its initial year, the Adamstown Canning & Supply Company employed 400 people, roughly 40 percent of Adamstown’s population and could produce 1.5 million cans a year. By 1917, the company had established a feed, grain and farm supply business in Frederick City and a hardware concern in Gaithersburg. In that same year, a Gaithersburg canning plant was established. By 1919, Adamstown Canning & Supply Company had purchased the old Colt & Dixon plant in Frederick City, and in 1929 the Adamstown plant became part of the concern, all now doing business as Thomas & Company.

By 1954, G. Frank Thomas, Stephen’s son, and Clyde E. Thomas, were at the helm of the company, encompassing the general farm supply business, fertilizer and feed business, grain business, and the canning facilities.

Adamstown Canning & Supply Company was important to Frederick County and Montgomery County, an example of the multiplier effect local farming and farming businesses can have on a locality’s economy.  This factory provided farmers in Frederick County and Montgomery County with a place to sell their produce. Before, farmers had to truck their produce all the way to Baltimore or Washington. The company provided both full- and part-time regular employment and increased employment for migrants who came in seasonally to pick produce. In turn, the wages of the cannery workers were re-invested in the community. Not least of all, the business gave residents access to local food in months when that food was not growing.

But in 1955, the company closed its doors. Records are unclear as to why. Changing consumer tastes? Competition with growing national firms? It remains a mystery.

But the story does not end there. G. Leicester Thomas would turn his fascination with goldfish and water lilies into the business that has continued with several generations of Thomases: Lilypons Water Gardens. G. Frank Thomas would go on to establish a charitable foundation in 1957 that continues to support and enrich Frederick County with grants to assist higher education, hospitals and human services.

And it all began with the idea of these brothers and their efforts to build a business utilizing the bounty of local family farms.