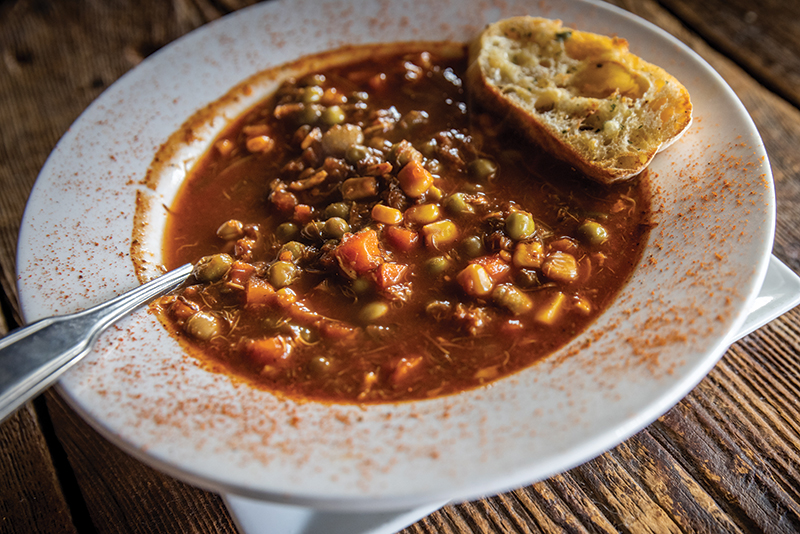 Warming Up Autumn One Bowlful at a Time

Whether you are sick and In need of some Mom-approved medicine or feeling great but want a starter to whet your appetite, soup is often the pinch hitter that comes in to save the day as a tasty, filling meal. Largely seen as a comfort food, many are transported back in time when they see a large bowl filled with steaming liquid goodness.

“In our household, it is the seafood chowder that makes us all feel better,” says Mary Evans, instructional specialist at Frederick Community College’s Hospitality, Culinary and Tourism Institute. “That is one of our favorites because it also has a history to it. It is something we have eaten over the years and memories come with it.”

Some of us were lucky enough to have a loved one to bring us a cup of soup when we needed to eat a meal that would be easy to digest. Others can recall seeing a beloved grandparent or parent in the kitchen, wooden spoon in hand and constantly checking the flavor from a soup simmering in a tall cooking pot for hours.

Frederick has many area restaurants that offer soups made from scratch, just like their chefs’ relatives used to make. Some are also showcasing bold, creative flavors sure to create new memories with customers.

Adam Sullivan founded Frederick Soups and Comfort Foods in May. A professional chef with almost 25 years experience in commercial kitchens, he decided to start his restaurant after being laid off twice during the ongoing COVID-19 pandemic.

Located on South Carroll Street, the restaurant focuses on a small, changing menu with three to four soups, a sandwich of the day, a salad, a wrap or burrito, and bowl. Sullivan makes all the soups from scratch. “I just change [the menu] when I want,” he says. “I just really wanted to work for myself. I was tired of working for other people. The idea of doing what I want to do appealed to me very much. If I have a soup that is selling very well, I will keep it on for a week or two weeks.”

Some of his best sellers include turkey chili, carrot ginger and white chicken chili. He also makes a number of bisques and chowders. “It seems like anything with crab, especially because we are in Maryland, seems to sell pretty well,” Sullivan says. “People want to try mine and compare it to some other places.”

The weather can play a role in what goes on the menu. During a 100-degree day in August, he chose to run a gazpacho but with cooler temperatures now approaching the region, he may offer heartier soups like a butternut squash, gumbo or jambalaya. His other menu offerings also play a role as he will run a soup that may lighten up some of the other dishes. “I just try to keep it light and refreshing,” he says.

Sullivan keeps a record of all the soups he makes. In four months of business, he had made more than 40 different soups. Some are created through requests from his customers. “I go off of their feedback a lot and listen to them,” he says.

Others are his takes on recipes he has done in the past. “Honestly, I am not big on recording and writing down stuff and typing and printing and having big books of stuff that I have done over the years,” he says. “It is really just based off my memory. It is stuff I have done in the past and taking a classic soup and putting a little twist on it or just doing a very simple soup and just trying to do it right.”

Sullivan enjoys the freedom that soups offer. They can go many different flavor routes as well as not being so precise that instructions must be followed exactly to get the best results. Soup “is more forgiving,” he says. “I can get more creative with some soups from my perspective.”

He often encourages his customers to add to his soups, like using rice or noodles, to create a different meal. “It doesn’t just have to be in a bowl,” he says.

Soup tends to not get the limelight much especially when it is competing with entrees, appetizers, salads and desserts. Sullivan is unbothered that some don’t give the meal its due. “I think you can tell a good cook by how they develop a soup and how they develop the flavors and how they put things together and how they can use up certain items they have in the kitchen and just being creative with that,” he says.

When going out to eat and ordering soup as the first part of the dining experience, Sullivan says, “I think the first impression is really a big deal and says a lot about the place and what they are doing. It stands out to me and I would assume to others.”

Callahan’s Seafood Bar and Grill in Frederick offers their patrons three options for soup: Maryland crab, cream of crab and French onion. Each one is made in-house fresh every day. Larry Rub, general manager/owner, notes each soup comes from family recipes. Guests usually choose them as appetizers to start off their meals and the soups are popular all year round. Both crab soups are best sellers and Rub boasts the flavor and spices used by their chefs set theirs apart from others in the area.

As a part of the culinary program at FCC, students learn about creating hot and cold soups that are clear or thick. Some of the soups they prepare include minestrone, cream of broccoli, French onion, shrimp bisque and roasted corn chowder.

For those looking to cook a soup at home, instructor Evans says start with a pot that is taller not wider. “You want to curtail the amount of evaporation coming out of it,” she says. “If it is a wide surface area, there is going to be a lot more evaporation.” The temperature should also stay at a simmer, not a boil. “You are going to taste as you go and that is going to clue you in as to whether it is going on a good path or you may want to rethink something.”

While a professional kitchen always has someone there, cooks at home should not leave the soup unattended. “It does like to be recognized as it is cooking. … Clear soups are a little bit easier to control the heat. That is basically what makes you a good chef is knowing how to control your heat. If they start a cream soup or if they have a milk base and they take the heat up too high and it scalds or scorches, you have to start all over again.”

For restaurants, soups can play a critical role, according to Evans. As supply chains continue to strain due to COVID, restaurants may not get certain products, so chefs have to adapt to what they do have available. That means some turn to creating soups. “It is a very good money maker,” she says. “Also, it allows you to use up stray products sometimes. [Soups] are so forgiving and they welcome just about anything into them. Now, if you had a consistent soup on your menu you would use a specific standardize recipe that would not change. But say you are going to do a special soup of the day—that is a playground for a chef.”