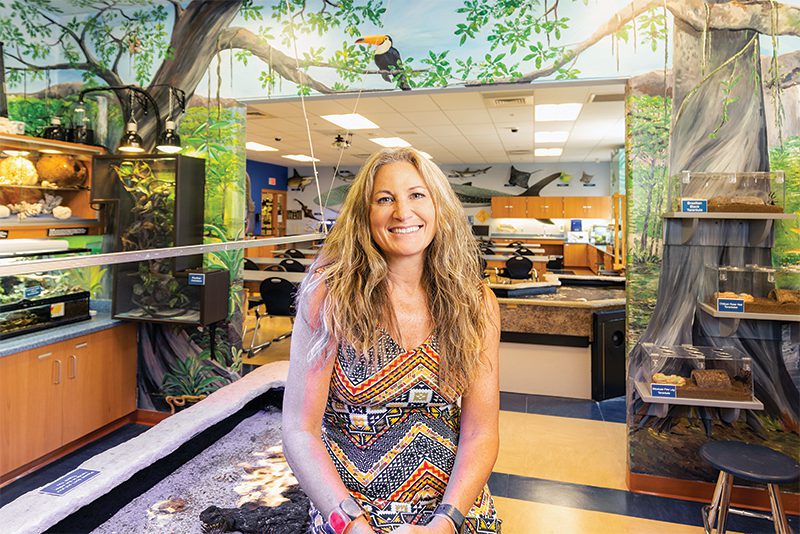 The saying goes, “‘Earth’ without art is just ‘Eh.’” Even those who aren’t particularly adept at creating art can attest that it is a powerful form of communication, transmitting complex thoughts in a heartbeat of connection.

Art conveys passion and experience, insight and aspiration, even love and hate, in various forms that stoke the senses. Whereas sensational headlines paint humans as wired to destroy, art speaks to our elemental impulse to create. It’s also a whole lot of fun.

Tina Young appreciates that fact. She’s a teacher with an artistic soul who weaves music, drama and visual arts into her lessons. “I always loved drawing,” she says, “but never thought I could have a career in art.” She earned her undergraduate degree in business, minoring in fine art, eventually getting a master’s in education. Now those three paths—business, art and education—blend into one big picture.

Young, a second-grade teacher at Glade Elementary School in Walkersville, has taught first through fifth grade the last 23 years. A mom of two grown (and artistic) daughters, she believes art is an important complement to other forms of learning. “I try to incorporate as much art as I can, when it’s appropriate. The kids love that.”

What her students might not know is that Young is also one creative force behind the sweeping murals at Frederick County Public Schools’ Earth and Space Science Lab (ESSL). Each year, some 18,000 elementary school students, plus teachers and chaperones, come through the facility as part of their curriculum. Another 5,000-plus community members come just for the fun of it. From the moment guests step through the doors, murals make the space immersive, flowing from dinosaurs to rocket ships and deep into this region’s unique natural environment. There are 3-D elements and wrap-around designs that lead the eye smoothly from one interwoven display to the next. 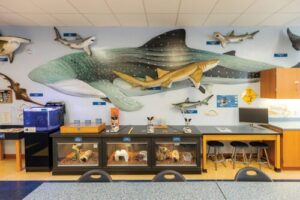 Young painted her first ESSL mural in 2009 when administrators began transforming its white walls into a captivating component of the overall experience. Now, every inch is covered. Visitors are greeted by Young’s interpretation of a prehistoric plain, juxtaposed with stuffed emus, a turkey, eggs and fossils. The modern birds seem to be grazing alongside their ancestors, but also offer perspective. ESSL Director Lisa Bruck explains, “Emus are called ‘the dinosaur bird.’ If you look at their feet, you can see that relationship.” Pointing to the familiar gobbler she says, “Velociraptors are in the Jurassic Park movies and they look like huge monsters. Actually, they were the size of turkeys.”

Fellow artist Stephen Blickenstaff created the space scene highlighting the history of rockets. It features NASA’s Cape Canaveral and a fanciful Death Star. He also created the waterfall, all constellations in the planetarium and other installations that work in tandem with Young’s contributions to make one cohesive environment.

The orange room, one of two classrooms, greets visitors with an underwater diving scene Young designed to highlight ocean studies. It transitions across a rocky outcropping and archway that wraps into an alcove, reminiscent of a cave, complete with stalactites. Across the room is a display that teaches relative scale with dinosaur skulls painted by Young, who says their hyper-realistic quality makes these pieces particularly satisfying. “I’m more of a realist than an impressionist,” she confesses, noting Andrew Wyeth and Norman Rockwell as some of her favorite creators. “I love to look at something and paint it as it appears.” 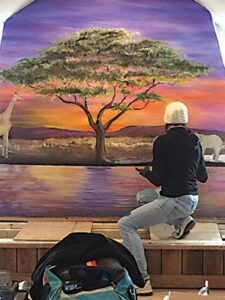 That dedication to realism posed a complication when orienting the gigantic whale shark in the classroom across the hall. Bruck recalls with a chuckle, “Tina struggled with this one because it needed to be 30 feet [long].”

Young’s blossoming almond tree at the observation beehive is more whimsical. That’s a focus for second-grade classes and leads into another wholly decorated room dubbed “Critter Cove,” which draws visitors in through a 2009 Chesapeake Bay mural by Young.

Here, Young’s river view stands in counterpoint to a tropical rainforest scene, matching the wildlife on display. It’s easy to be so beguiled by the surroundings that you overlook the aquariums housing tarantulas, fire-bellied toads or panther chameleons. The large, open tank of spiny urchins and small fish is hard to miss. Since ESSL houses the Living Material Center, which provides organisms for FCPS classroom instruction, there are plenty of fish, birds, snakes, frogs and lizards, even some blue crabs that aren’t destined for a date with melted butter and Old Bay.

Bruck shares, “We have 38 species, but so many of each animal. That’s hundreds of individual animals.” As she talks, a group of pre-teens quietly coo at displays while a toddler giggles and bobbles in fascination from one creature to the next. Pointing to the colorful images, she says that the grand scale murals “really motivate the students and incorporate what we’re trying to teach. There’s so much that we are able to share from [Young’s] work.”

In turn, Young calls ESSL a “gem,” on par with offerings in large, urban settings like Baltimore. She’s since created murals for other organizations, including several CrossFit locations around Maryland, and started two art-based businesses in 2015, Petite Picasso and Canvas Celebrations. Petite Picasso offers traveling paint parties for kids and Canvas Celebrations is the grown-up version. Young got the idea from a friend who attended a bachelorette party with a paint-your-own-picture activity. There are similar national competitors who sell franchises, but Young initiated something all her own.

Her thought was, “That’s something I’d really like to do for kids, since I am an elementary school teacher.” Naturally, Petite Picasso parties come with a mini art lesson on masters like Matisse, Cézanne or Monet. 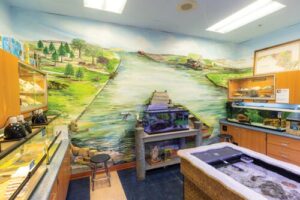 She started with $1,000 in supplies and a website, but business took a while to pick up. By 2019, Young’s side businesses were in full swing. She hosted paint nights with nursing homes and community groups, donated parties to charities and set up fundraisers, all while participating in local festivals, such as the Frederick Arts Council’s plein air events.

“I do commission work,” says Young, whose party businesses stopped during COVID-19 lockdowns. “Now, I’m working on a pencil drawing. I’ve done watercolors and pet portraits.” She has prints for sale and connects with followers on Facebook, but says she’s happy to be presenting parties again.

As a teacher, it’s also satisfying to see people learn about themselves. “For every person who comes and says, ‘I can’t paint. I’ve never done this in my life,’ by the end, they make something beautiful and the person has a renewed sense of confidence.” Her parting advice to all would-be artists, “Try to think like a kid. They’re not focused on making it perfect. Just appreciate that you are taking a leap. You are doing something different. Enjoy the experience.”