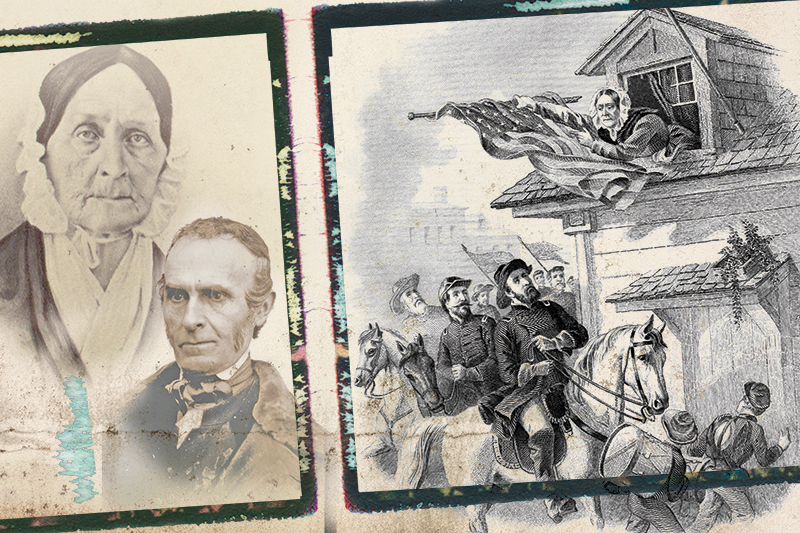 The Disputed Ballad of Barbara Fritchie Endures … With Context

For fans of the Barbara Fritchie legend, imagery is everything: An old woman admonishing Confederate soldiers to respect the U.S. flag is just too perfect. Add to the picture a scowling face, a shaking fist and the suggestion that shooting her would be more appropriate that disrespecting that flag, and the drama is irresistible.

The trouble is, the facts don’t support the popular account of Fritchie’s display of patriotism. Apparently, poet John Greenleaf Whittier took some license in 1863 when he wrote Barbara Frietchie, beyond the spelling of her name. But, then again, that’s what poets do. Whittier was not the first to evoke strong feelings by massaging facts, nor was he the last. And there is evidence to suggest that when he wrote the epic poem, he was unaware that the story of Barbara Fritchie was likely a conflagration of several accurate accounts of feminist heroism in Frederick County during the Civil War.

The true story is, perhaps, even more fascinating.

The real Barbara Fritchie lived to the lofty age of 96 in an era when average life expectancy was about 40 years. She died in 1862 and is buried in a place of honor at Mount Olivet Cemetery. Chris Haugh, the cemetery’s community relations and historic preservation manager, has probably looked at her flag-defending tale from more angles than anyone. He acknowledges that fact and folklore have blurred, but still finds value in the story. “It’s an amazing poem that celebrates women,” he says of Whittier’s work. While women could not participate in the fight by picking up arms, Haugh says Fritchie represents the many ways that women expressed support for the Union. “She is the embodiment of all these women. She may have personified the sentiment that we were going to stick with the Union.”

That sentiment and the resulting folklore can be examined through the experiences of at least three local women: Fritchie, Mary Quantrill and Nancy Crouse. While Fritchie herself did not have a real-life encounter with unchivalrous Confederate soldiers marching through Frederick County in September 1862, Quantrill and Crouse did. They did not make it into Whittier’s poem, but their acts of patriotism were recorded by journalists and historians.

Whittier immortalized Fritchie in his poem after he heard the story from a friend who heard it from a friend, who happened to be a Fritchie relative. According to Haugh, Whittier’s friend, fiction writer E.D.E.N. Southworth, heard the story from Valerius Ramsburg, Barbara Fritchie’s grandnephew. Southworth outlined the story in a letter to Whittier, urging him to write it and have it published. According to Haugh, Southworth told Whittier, “I have a story that is meant for your pen.”

The Atlantic Monthly published Whittier’s 30-couplet Barbara Frietchie in 1863. It tells a story about Confederate Gen. Stonewall Jackson ordering his troops to fire on a Union flag that was hanging from Fritchie’s second-story window as they passed by her home on West Patrick Street. They were marching westward toward what would become the Battle of South Mountain and, ultimately, the Battle of Antietam, the bloodiest day in the nation’s history.

According to Whittier, a rifle blast ripped through Fritchie’s flag and broke the staff. Leaning out a window, Fritchie snatched the tattered flag and shook it at the rebels below. The most famous line of the poem is: “Shoot if you must this old gray head. But spare your country’s flag, she said.” Upon hearing this, the chagrined Jackson ordered his troops to spare Fritchie and her flag and to move on: “Who touches a hair on yon gray head dies like a dog! March on! he said.”

Whittier’s imagery stuck. Not only did he describe a 95-year-old woman standing in defiance against Stonewall Jackson, he set the scene of a tranquil town of “clustered spires” and “green-walled” hills. His description of Frederick lives to this day.

The poet, a Unionist and an abolitionist, no doubt intended to inspire people in the North to get behind the war effort. According to Haugh, he may have intentionally misspelled Fritchie’s name as Frietchie to emphasize her German heritage, since there was a sizable German immigrant population in the area. In an effort to entice more men to join the Union Army, Haugh says, “He may have pulled on the heartstrings of the immigrants with the image of an old woman waving a Union flag.”

Mary Quantrill lived at 220 W. Patrick St. and operated a private school in the adjacent building, a short walk from the Fritchie house. She had an encounter with the Confederate troops as they marched past her house in September 1862. It was very similar to what Whittier described.

In a letter to The Washington Star newspaper and later picked up by The New York Times, Quantrill described the event. She said she was resting on the railing of her porch holding a small Union flag, “… when a soldier stepped behind me and with his bayonet cut off my staff close to my hand … turning about, I saw him tear my flag to pieces and stamp them into the dust.

I pronounced this the act of a coward and again turned to view the army.” A girl standing nearby, possibly Quantrill’s daughter or a student, produced a flag from her sleeve and that was also cut down by the same man. Another soldier, thought to be Gen. D.H. Hill, saw the disrespectful behavior and admonished the flag destroyer.

One of Quantrill’s neighbors, Henry M. Nixdorf, said he witnessed the events and had five other neighbors sign a statement verifying his account. A May 22, 1912, article in the Frederick Evening Post described Quantrill’s experience and stated that she deserved the honor that was given to Barbara Fritchie. It suggested that there was documentation and verbal testimony to prove her story and stated that “her claim as the real heroine of Whittier’s poem is incontrovertible.”

Scott McCaskill agrees that Quantrill was heroic. He owns and operates his business, McCaskill Financial, out of her former home. When he discovered the historic significance of the site, he worked with The Frederick Woman’s Civic Club, America’s Byways and Visit Frederick to construct a permanent display explaining Mary Quantrill’s patriotic defense of the flag. He says working in the 160-year-old building is never dull. He and his staff have grown accustomed to doors and locks opening and closing on their own and they often joke, “Maybe it’s Mary visiting us today.”

A third story involves Nancy (or Nannie) Crouse, the teen daughter of George and Ellen Crouse, who were Union backers and whose oldest son had enlisted in the Union Army. When the Confederates marched past their house on West Main Street in Middletown in September 1862, they stopped and demanded that the Crouses hand over the Union flag that flew on a staff above their house. Nannie went up the stairs, grabbed the flag and returned to confront the soldiers with the flag draped over her body. A soldier put a gun to her head and demanded that she hand over the flag. She refused, saying that he may shoot her but she would never give up her country’s flag to the hands of traitors. He didn’t shoot.

According to Haugh, Nannie Crouse was lauded as a patriot and dubbed the Valley Maid. Like Quantrill, her story echoes elements of Whittier’s account of Fritchie’s standoff with rebel soldiers. Just like Quantrill’s supporters, Nannie’s family asserted that she was the real heroine of the poem. Her brother Charles said he did not know how Barbara Fritchie became connected with the event. Poet and novelist Thomas Chalmers Harbaugh wrote a poem about Nannie called The Ballad of Nancy Crouse. It was published in The (Middletown) Valley Register and The (Frederick) News in 1906.

Haugh points out that Nannie Crouse is also buried in Mount Olivet, coincidentally next to Henry M. Nixdorf, former neighbor of Barbara Fritchie and Mary Quantrill.

Despite the evidence supporting the other stories, the Fritchie version was the only that enjoyed the marketing appeal of a Whittier poem, so it is no surprise that it was that story—despite its limited veracity—that endured. In fact, in the decades following her death, the Barbara Fritchie name, likeness and the clustered spires reference were used to sell products and promote local tourism. The Fritchie-fication of Frederick eventually included a museum, restaurant, motorcycle race, logos and artwork.

Meanwhile, the story of the defiant elderly woman standing up for her flag spread throughout a country that always loves a good patriotic yarn. Whittier’s poem was taught to schoolchildren and recited around the family hearth, and it also had a longer reach, inspiring a classical music composition and even a Broadway play. British Prime Minister Winston Churchill enjoyed the story so much that, while visiting President Franklin D. Roosevelt at Shangri La (the presidential retreat near Thurmont now called Camp David) in 1943, he requested a stop in Frederick. When his car pulled up to the Fritchie home he got out and recited the poem from memory in its entirety, not just the action-packed parts.

How can Mary Quantrill and Nannie Crouse compete with that?

Maybe the easiest way to reconcile the story is to say Frederick is big enough for fact and fiction. In the shadow of the Barbara Fritchie House at 154 W. Patrick St., there is a display similar to one in front of Quantrill’s former home. It refers to the Fritchie legend and features excerpts from the journals of Jacob Engelbrecht, a local tailor who eventually served as mayor of Frederick and chronicled daily life here, as well as national and world events. He wrote extensively about Frederick’s role in the Civil War and mentioned the story of Fritchie in his diary. He did not believe that Whittier’s words were an accurate assessment of actual events. He lived across the street from Fritchie and notes, “should anything like that have occurred I am certain someone in my family would have noticed it.”

Engelbrecht’s recollection and notes aside, Eleanor D. Abbott, a great-grandniece of Fritchie’s, believed Whittier’s account to be accurate. She spent years promoting the poem, its story and her ancestor’s patriotic stand. In 1937, Abbott published A Sketch of Barbara Fritchie, Whittier’s Heroine, an account of what she believed were the actual events that inspired Whittier.

She wrote, “Occasional efforts have been made by prejudiced persons and those ignorant of the true facts to convince the public that Barbara Fritchie was a myth, and that Whittier’s poem is pure fiction. This, of course is not true.” But even as she dismisses skeptics, she quotes Whittier as saying, “There has been a great deal of dispute about my little poem, but if there was any mistake in the details, there was none in my estimate of her noble character and her loyalty and patriotism.”

Fritchie’s home was torn down after being badly damaged in a flood in 1868. It was reconstructed in 1927 from old photos and documents. This past summer, property owners Bryan and Charlotte Chaney, who operate an Airbnb in the home, worked with the Frederick Arts Council to commission a mural on the side of their Downtown building. Maryland artist Kirk Seese rendered a design by Greg Harlin that features the meaty excerpt of the poem and Barbara’s face peering down from the adjacent Hauer house, Fritchie’s home before she married. Both the Hauer and Fritchie houses can be rented for overnight stays or events. The Fritchie house is even included on Maryland Heritage Tours’ Ghost Tours of Historic Frederick. The legend lives on.

Poets spin words and create whimsical tales. Journalists and historians find and record facts. Their combined perspectives over time have helped keep the story of Barbara Fritchie alive, but in check.