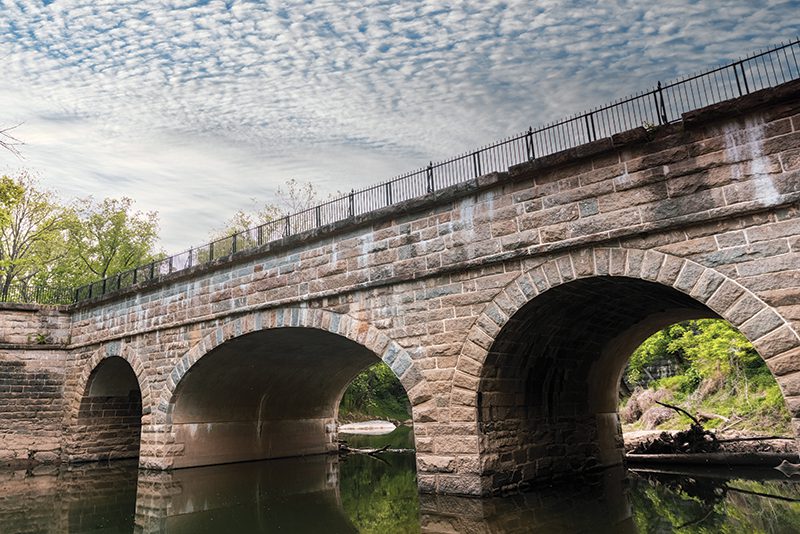 Fifteen years ago, pieces of Frederick County’s transportation history were strewn about in wreckage. Five years and $4.5 million later, the stones that formed the Catoctin Aqueduct were back in place. The story could be told.

It’s a story that connects the county’s transportation legacy from the 18th to the 21st centuries, about a once-thriving engineering marvel that sank into ruin and rose back up with new purpose. The story is part of the legacy of the C&O Canal National Historical Park, which turns 50 this year.

Built between 1832 and 1834 with hand-cut granite stones quarried in Ellicott City, the Catoctin Aqueduct collapsed in 1973. For years after, canal visitors crossed over Catoctin Creek on a prefab steel truss Bailey bridge. “It looked like an erector set bridge,” says George Lewis, who shepherded the fundraising campaign to replace the aqueduct.

Called the “Crooked Aqueduct” because canal boats had to make an unusual sharp turn to enter, Lewis set out to rebuild the aqueduct and showcase its former glory. The rebuilt stone, three-arched structure is 100 feet long. Nearby is the B&O Railroad viaduct, still used today. The sight of the aqueduct and viaduct together at the mouth of the Catoctin make a dramatic backdrop for Frederick County’s role in American transportation history.

The C&O Canal, with about 20 of its miles in the county, also connects the cyclists, joggers, boaters, pedestrians, dog walkers and birders who regularly use the nearly flat towpath that was once used by mules to pull canal boats.

Visitors come for a daily walk, a weekend bike ride or to see a slice of Americana. They come to engage in a slower-paced form of recreation, one that allows them to meander and smell the woodsy scents, see 19th-century locks and lockhouses, and access the Potomac River from boat ramps built by park staff. Overnight visitors can camp in hiker/biker campgrounds or stay in neighboring towns. 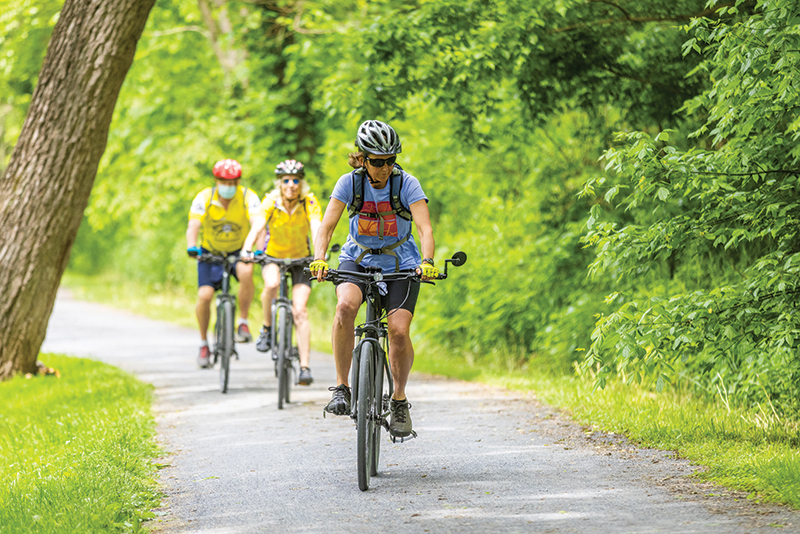 “The park is this buffer from all of the development that has grown up around it,” says Kevin Brandt, former park superintendent who retired in 2019. At the same time, he adds, communities along the canal, like Brunswick and Point of Rocks, benefit from visitors who visit and spend money.

The C&O Canal Park attracted 4.9 million visitors in 2020, making it the eighth most visited U.S. national park. But granting park status to the canal that George Washington once envisioned as the pathway to the west almost didn’t happen.

The Chesapeake and Ohio Canal began construction in 1824 in the Georgetown section of Washington, D.C. The goal was to connect the Chesapeake Bay and Ohio River via a canal built along the Potomac River. Floods and the rise of the railroad stopped the canal’s construction at Cumberland, 184.5 miles northwest of Georgetown. The canal ferried goods, especially coal, lumber and crops, from the upper Potomac region to markets in Washington and beyond.

A flood in 1924 and increasing competition from railroads shuttered the canal for good. In 1938, the U.S. government bought the canal and planned a natural recreation area. In the 1950s, however, Congress decided to build a parkway along its route.

U.S. Supreme Court Justice William O. Douglas disagreed. In a letter to The Washington Post, he called the stretch of land from Washington to Cumberland “one of the most fascinating and picturesque in the nation. … It is a place for boys and girls, men and women. One can hike 15 or 20 miles on a Sunday afternoon, or sleep on high dry ground in the quiet of a forest.” A two-lane highway would destroy the sanctuary, he wrote.

Douglas organized a canal hike in 1954. The group of 58 dwindled to nine by the end, but they averaged 23 miles per day and dominated the headlines. The hikers achieved their goal on Jan. 8, 1971, when Congress authorized the C&O Canal National Historical Park Act.

Abbie Ricketts recalls visiting her grandparents’ fishing cabin along the C&O Canal near Brunswick when she was a kid. Her parents would take her on a bumpy car ride along the towpath. Those cabins are gone today. Most of that land is now park property.

“It was a really great childhood, spending time on the towpath and river,” Ricketts says. “But now, with it being public land, many more people can enjoy it. It is a beautiful park. How many parks are 180 miles long?” Ricketts chairs the Canal Towns Partnership, an effort by the C&O Canal Trust to help communities along the canal benefit from the park.

Her family owns Brunswick Sports & Apparel. Along with sports clothing, embroidery and signs, the store sells fishing tackle to locals and visitors. “We’re in a good position,” she says. The store is a quarter mile off the canal towpath. 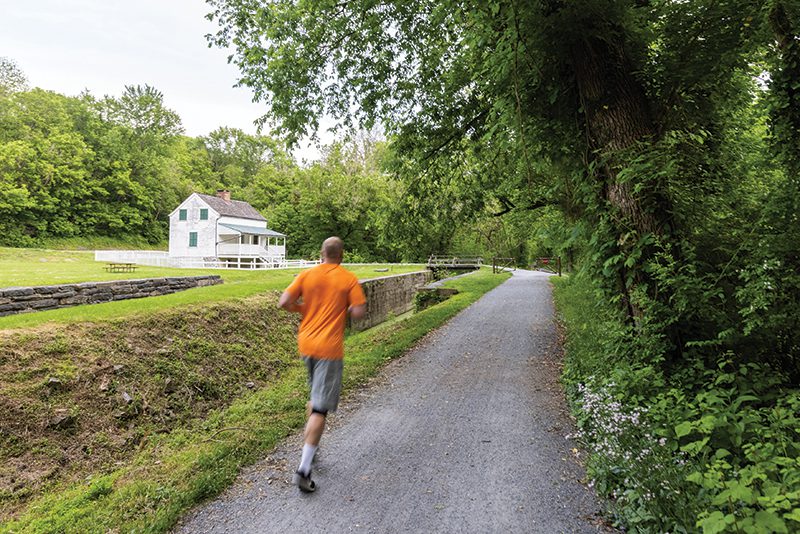 Walt Stull, a former Brunswick City Councilman and founding member of the Canal Towns Partnership, has long been a canal enthusiast. “The canal towpath has given hikers and bikers quick access to local businesses, including bike shops, restaurants, hardware stores, convenience stores and places for refreshments,” he says. “Many of these towns have unique features that aren’t in metropolitan cities.”

Cyclists are a common sight in Brunswick, Ricketts says. Some ride sections of the canal. Some ride the entire canal. Still other hardy souls pedal 335 miles from Pittsburgh to D.C. or vice versa via the canal and the adjoining Great Allegheny Passage.

Kevin Belanger was one in the summer of 2020. Belanger, who grew up in Frederick and graduated from Frederick High School, recalled pedaling his department store bike on the C&O as a kid on a Scout trip. He was fascinated by the idea that the towpath connected him to Washington.

That set him onto his career path. He’s now manager of trail planning at Rails-to-Trails Conservancy, which encourages the metamorphosis of old transportation routes into recreational trails. In the future, the C&O is expected to be a part of the Great American Rail-Trail, a network that traverses the U.S. Already, 2,000 miles of the planned 3,700-mile route are in use.

Camping in a tent and sleeping on hammocks, Belanger and his friend took about a week to ride from Pittsburgh to D.C. “We met so many great people,” he says. Eating takeout food from local restaurants and buying supplies from local shops was part of the fun. The Maryland Department of Tourism estimates that multi-day canal visitors spend $105 per day in adjacent towns during travels along the canal. The agency estimates that between 21,000 and 36,000 people a day visit the towpath for recreation in Frederick County.

Lewis, a retired veterinarian and vaccine researcher for the federal government, moved in 1996 to a 45-acre farm in Lander that overlooks the canal. Before Catoctin Aqueduct was rebuilt and the lockhouses at Lander and Point of Rocks were restored, the area served as a trash dump and teenage hangout. “Today, it’s a beautiful spot,” he says.

Jonathan Warner would agree. He lives near the canal in Dickerson in a renovated 1820 cabin and is a member of the board of the C&O Canal Trust, a partner organization to the national park that focuses on fundraising and awareness. He owns a commercial real estate business in Frederick and is an expert at repurposing old buildings for new use. He’s helping the Canal Trust expand its Canal Quarters program. Currently, Lockhouse 28 near Point of Rocks welcomes overnight visitors, and he’s hoping more Frederick County lockhouses can be used for overnight stays.

“Getting people to spend the night on site, that’s the ultimate tourism,” he says.