No Job Too Large or Too Small 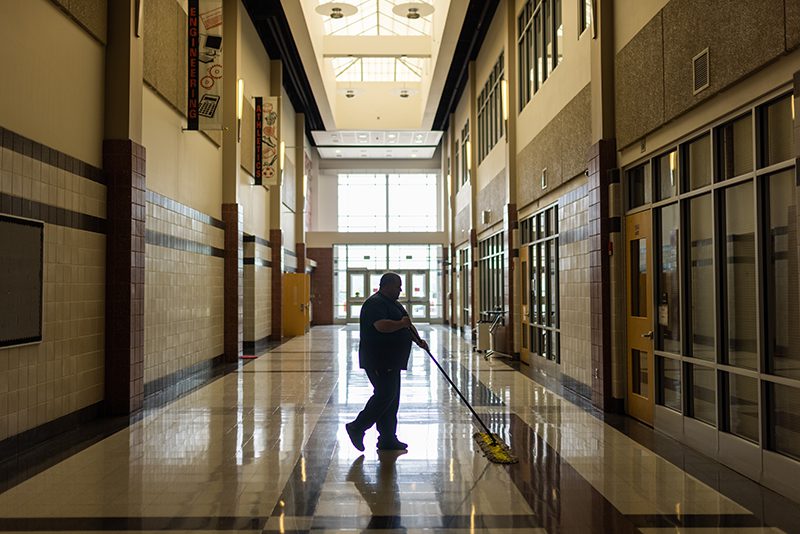 From Shoveling Snow to Cleaning Classrooms, Custodians are the Front Line of School Safety

Stacks of microfiber cloths are surrounded by disinfectants in the lunchroom at Urbana Middle School. The cloths are either bright orange or brilliant blue, depending on the task, which helps the custodial staff speed up the disinfecting process.

For Michelle Randolph, lead custodian at the school, the color-coding system means efficiency and efficiency has made it easier for her staff to adapt to the cleaning realities in the pandemic world. “It’s all about the safety and making the students feel comfortable and coming to a clean place,” she explains. 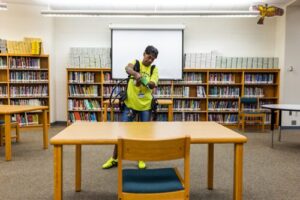 School custodians used to be known as janitors, but today their work goes well beyond a mop and a bucket. That already-expanded role grew even more after the COVID-19 pandemic required them to be the front line of school safety.

“I don’t think people appreciate the amount of work custodians do,” says Brandon Oland, communications manager for FCPS. “We have day shifts and night shifts.” After each school event, whether it’s a game, a play, a concert or a dance, custodians are there to clean up. They greet the students arriving to school in the morning, they help with lunch shifts and cleanup, and they see the students off after school. For some, that’s when their job is starting. “They’re there for late-night basketball games and early-morning testing,” Oland says.

Larry Phillips, FCPS manager of custodial services, knows the job too well. Phillips, known as LP, owned a cleaning business before he began substitute teaching after the 2008 economic downturn. He then got a chance to become lead custodian at Twin Ridge Elementary School and realized he had found his niche. “I never thought I’d become a school custodian,” he says. “I never thought of it as a line of work until circumstances moved me in that direction.”

He worked at Twin Ridge, Oakdale High School and Linganore High School, along with a stint as a manager for Howard County Public Schools, before moving into his current position. Custodians are proud of what they accomplish. “There is great value in the work that they do,” he says. “I look at them as the first-responders in the school system. When there’s smoke in the building, they’re first on the scene to determine what happened.” 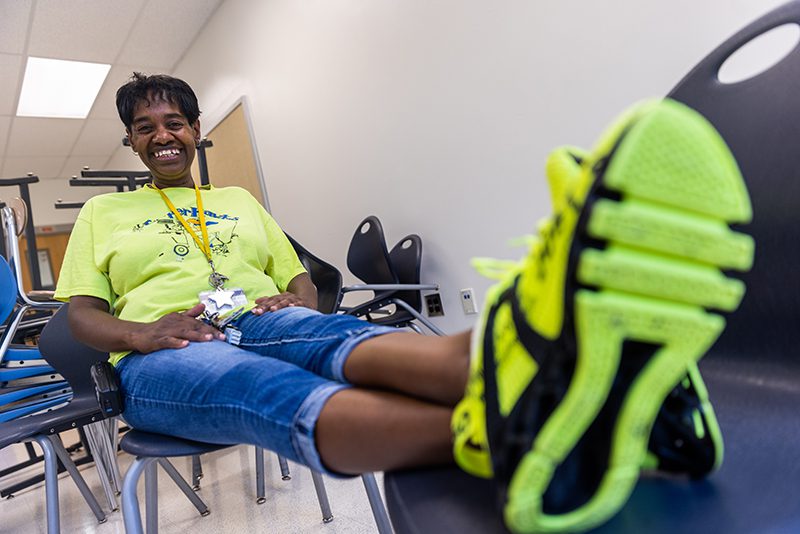 At Urbana Middle, each custodian has a cart with the basic tools of the trade: bucket, mop, dustpan, cleaners, towels, paper towels, rags and gloves. Then there’s the specialty equipment, such as what’s used to clean and wax wood floors. A heavy scrubber strips the old wax from the wood, followed by a machine that puts down three new coats to make the floors gleam.

“This is a job,” Randolph says. “If you don’t take it down to the wood, it won’t turn out right.” But care must be taken not to strip off any wood. “I love wood floors, but they collect dust.”

Floor maintenance is a big part of a school custodian’s job. Each school day, thousands of pairs of feet walk across school hallways and classroom floors. To keep them clean requires more than a mop and pail. Custodians in many schools pilot a Zamboni-like machine that dispenses cleaning solution and uses a squeegee to mop it up, leaving behind a shine that you can see yourself in. “It cuts down on the time it takes to clean the floors,” Randolph says. 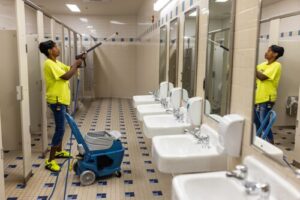 Classrooms get dry-mopped each day, but there’s only enough time to wet mop and dust these rooms once a week. Science rooms, shop areas, art, cooking and sewing rooms can be some of the messier rooms to clean at the middle and high school level. Randolph recalls cleaning up after an animal experiment in the science room. “It was bad,” she says.

Classrooms at Urbana Middle have a mix of carpet and tile floors, and the carpeted floors can be a challenge, especially when there’s no plastic shield under the teacher’s chair. Then there’s the exercise room, with stationary bikes, treadmills and weight equipment. It’s up to the user to disinfect before and after each use, but the rooms are thoroughly disinfected by custodians each week.

Some cleaning, however, is once a year. School lockers, for example, are cleaned and disinfected at the end of each school year. Teachers need to take down their bulletin boards and wall decorations so those surfaces get cleaned in the summer.

Randolph likes the fact that she’s there to help not only staff and teachers, but students. “If they have anything spilled or wasted on the floor, I will clean up after them,” she says. 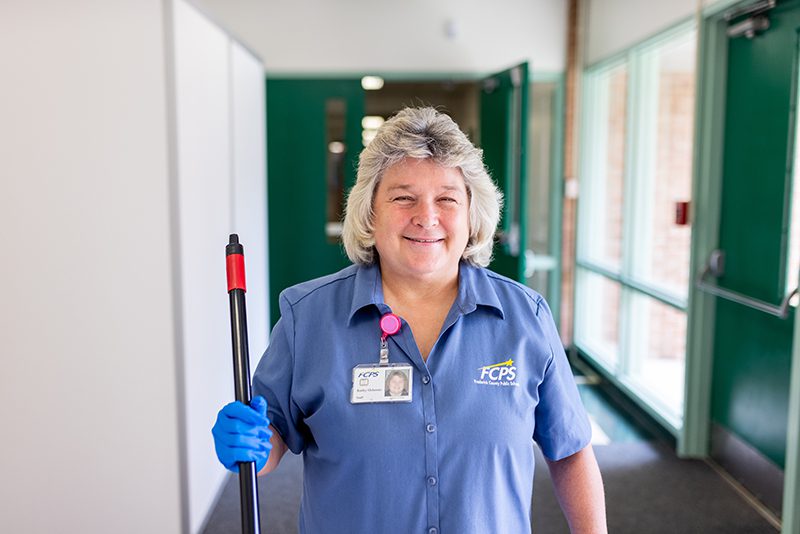 Freshly painted door frames will welcome students and staff this fall at the 50-year-old Green Valley Elementary School in Monrovia. About 21 years ago, Kathy Osborne started as an FCPS custodian working the overnight shift. She would come home from work and then see her children off to school before going to sleep.

Now lead custodian at Green Valley Elementary, she and her staff have used this summer to not only paint and repair, but also to clean every surface of the school. “I did the door frames,” she says with a smile. “My guys don’t like handling those.” 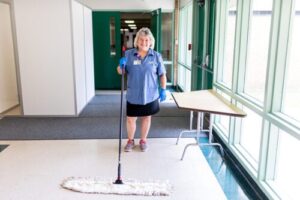 Everyday jobs include cleaning bathrooms, emptying trash, wiping down desks and vacuuming carpets. Each custodian takes a section of the school, a practice that’s followed in all FCPS schools. Each cleans about 21,500 square feet a day. Lead custodians get a section of the school just like the others. Osborne cleans the front office, the music and stage areas, and most of the school’s bathrooms. “This is every day,” she says.

Kids tend to make the most mess in art class, Osborne says. “Clay is the worst,” she says. “You literally have to mop this room every night.”

Summer is also a time to re-tack fabric onto walls, fix broken drawers and cabinets, deep clean blackboards and whiteboards, clean the window blinds, and steam-clean carpets. Outside, weeds are pulled and mulch is added to the landscaping.

“I love my job,” she says. “Something’s going to happen that’s not the same, and I’m not sitting in front of a desk. I walked 15 miles one day in 10 hours. It was crazy.” In summer, the staff works four 10-hour days, but even in the eight-hour days she works during the school year, she typically walks 8 to 10 miles.

A few years ago, a cleaning professionals magazine nominated Osborne as one of the top-five school custodians in the country, and she traveled to Las Vegas for the finals, where she spoke about innovations she had pursued. “I started a new recycling program at Centerville [Elementary School],” she says. The school went from twice-weekly trash pickups to collections once a week for trash and once a week for recycling.

“That’s $400 [savings] every time,” she says. One of the biggest savings was from the lunch recycling program, in which Centerville used leftover food scraps for compost. Students joined custodians in checking the trash for stray food scraps and pouring out liquid waste.

One of her new employees served as a part-time compost coach at Lincoln Elementary School before he came to Green Valley. “It helped that he knew how to compost,” Osborne says. Although management is a big part of her job, she doesn’t like to micromanage. She’d rather let her staff figure out how they work best and approach the job accordingly. “You have to adapt when you hire someone new,” she says. “You have to train them, but I also need to listen to their ideas and work according to their learning processes.” 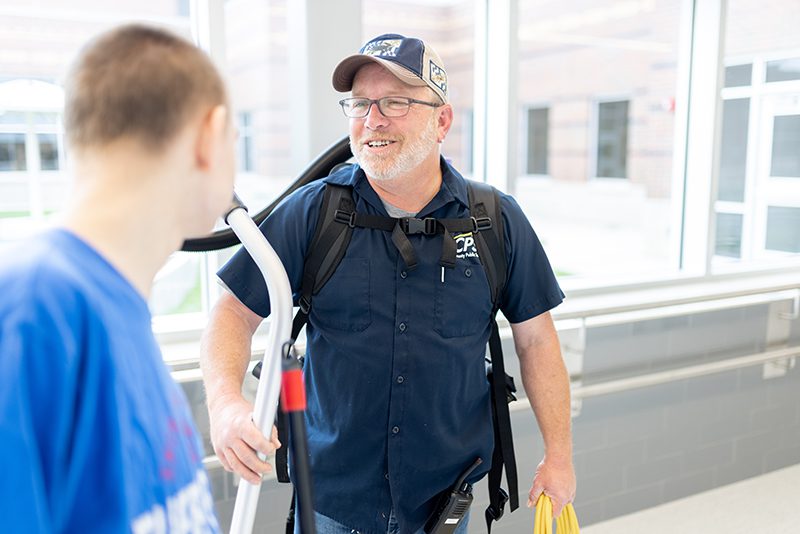 Rock Creek serves special needs students, ages 3 to 21. The old building, built in 1972, was still in good shape, but he’s excited to be in a brand-new school that is clean and bright. Daylight streams into the hallways and classrooms through large windows. The lunchroom looks out on a spacious play area that also contains several garden boxes. New flooring won’t need waxing and polishing this year, McTighe notes, but that’ll be a job for next summer. 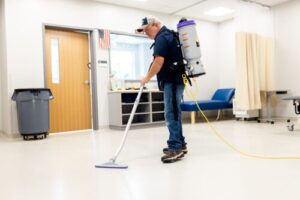 The new school is divided into wings for younger students, middle school-aged students and older students. Classrooms and bathrooms are cleaned daily. The cafeteria, gym and locker rooms are cleaned once or twice a week. The floors are cleaned daily, but once a month, Rock Creek, along with all other FCPS schools, polishes its floors with a burnishing solution that gives the floors that glassy shine.

Working with students with special needs means Rock Creek School custodians sometimes have different tasks than those at other FCPS schools. “The saying is, ‘You either love it or you leave it,’” he says. “Not everyone can deal with that.”

But McTighe finds much reward from his interactions with students, who are often happy to see him or his staff. “I have kids who work here through the summer,” he says. Many are learning job skills, and one former student now works as a custodian at Wegmans. 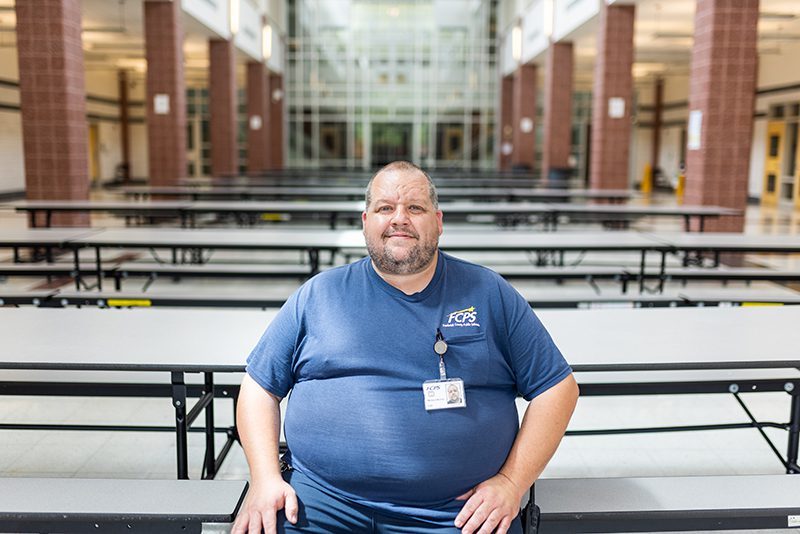 Mike Bowles started his career as a school custodian on the night shift at Myersville Elementary School 17 years ago and has been the lead custodian at Linganore High School for the past seven years,“It wasn’t something I intended,” he says. “I intended to get into the maintenance department. But I liked working with kids. Just seeing their reactions, the interactions, the smiles, it makes it worthwhile.”

From the short brooms and dust pans he let the kids use when he was at Urbana Elementary School to the student helpers in the cafeteria at Linganore, the 2021 School-Based Custodian of the Year enjoys working with young people. 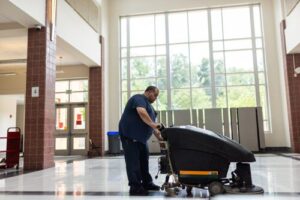 He encourages his staff to also look for ways to interact with the students. Linganore has 11 custodians, seven of whom work the night shift, which usually ends at 11 p.m. They encounter students not only during the day, but after school for club or sports activities and events. Weekend events provide overtime work.

“We make sure the building and the facilities are secure every night and locked,” Bowles says. Teachers wanting to rearrange their classrooms need only put in a request to get some extra hands. “We fill in as needed. I’ve served lunch, washed dishes, filled in for bus duty.” Besides cleaning and making minor repairs, custodians change a lot of lightbulbs. “People don’t realize how important lightbulbs are,” he says.

There are few snow days for custodians, who come in to clear the parking lots and walkways. During the pandemic, custodians collected learning materials ordered by students and teachers and coordinated pickups. Other staff and students are always willing to help whenever Bowles and his staff are shorthanded. “I’ve had students, who didn’t want to leave, help us out over the summer,” he says.