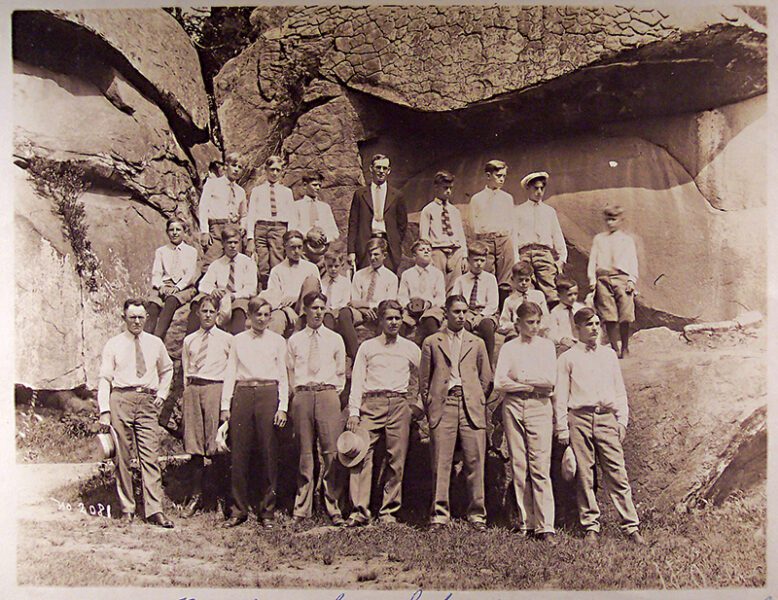 Every year we look for a new photo in the Heritage Frederick archives of a school or students to celebrate the start of the school year. This year, we found this 1929 photo of students at the Buckingham House and Industrial School near Buckeystown. In 1871, Daniel Baker purchased the house at the site and converted it into a vocational training school for orphans and indigent boys. In 1898, the school was officially incorporated and expanded to cover more than 300 acres by Baker’s three sons, William, John and Daniel Jr. The building could house 50 boys and young men, ages 6 to 21, who operated a dairy farm to fund the school’s operations. They also cultivated approximately 30 acres of asparagus, which required an extensive irrigation system installed by the students.

The school taught and trained about 290 students before it closed in 1944. At that time Maryland officials were standardizing the care of orphans and new regulations would have required the Baker brothers to operate their school as a public orphanage with government oversight. They chose to close the school instead. In 1950, the Episcopal Diocese of Maryland purchased the campus to be converted into a conference and retreat center. Two years later it was named after the first Episcopal bishop in Maryland, the Rev. Thomas John Claggett.

There are still periodic reunions held for former students of the Buckingham school. The school building itself was added to the National Register of Historic Places in 1982, at which time archeological digs revealed seven sites of occupation by prehistoric occupants as well as a pre-Columbian, Woodland-period village, one of the few such sites in the Monocacy Valley. Unfortunately, it appears that plowing and other farming work conducted by the Buckingham students likely disturbed further such sites.