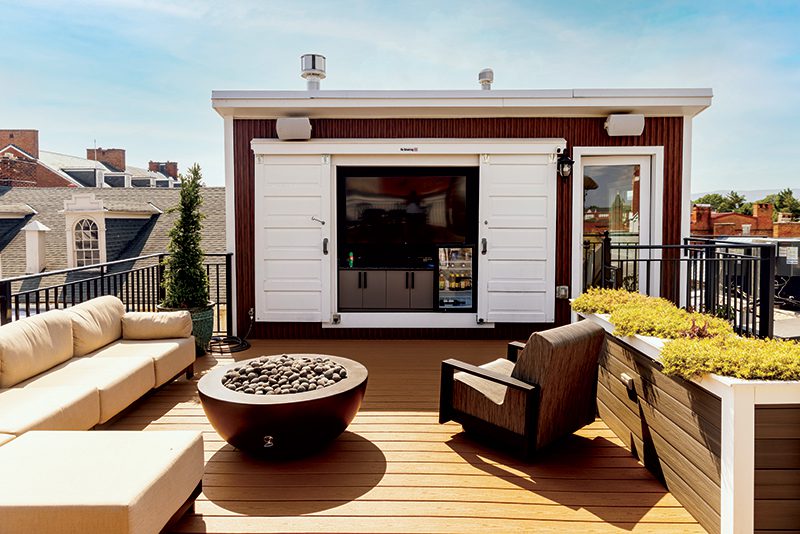 There’s a certain romance to lofty rooftop decks that look out over a bustling city, unbound by walls, removed from the throng of humanity below. It’s especially true in large metropolitan areas, where privacy and greenspace both come at a steep premium; designers and engineers are reducing the environmental impact of development by transforming rooftops into everything from urban farms to luxurious residential retreats.

But the appeal is growing in smaller cities and towns, too—catalyzed by pandemic lockdowns that gave us all a new appreciation for home. With a little planning and imagination, these private sky-high spaces give residents outdoor access and a little extra breathing room, even where pavement supersedes plants.

Usually shrouded from passersby on the ground, a rooftop deck can go beyond a rickety fire escape or utilitarian landing to become an inviting oasis, while building value and maximizing every inch of available real estate. Stephanie Weigelt and her husband, David, latched on to the idea when they bought the old Beth Shalom Synagogue on 2nd Street in Downtown Frederick a few years ago and began converting it into a private home. The building housed the temple from 1923 until 2015, so it had plenty of open space inside, a solid structure, prime location and an appealing history. But no yard. 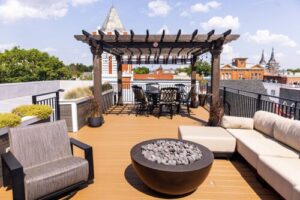 “When we first moved in,” she says, “we didn’t know what the roof was like.” A roofer cut a hole so they could take a peek. It was the view over the city, not the silvery finishing under foot, that really captured their attention. The couple enlisted an experienced contractor, CCS Inc., and architectural firm, Caddworks, to make the dream a reality. They also reached out to the city’s Historic Preservation Commission to make sure designs fit required parameters. At the time, there were only a handful of such rooftop spaces in Frederick. “Thankfully,” Weigelt continues, “before we decided to do this, Brewer’s Alley [restaurant] added a deck to expand their bar area, so there was precedent for it.”

The Weigelts initially wanted to transform the entire rooftop, balancing a relaxing deck area with substantial green space for native grasses and flowers. Weigelt nods to neighboring gardens, including a gracefully soaring gingko tree. “You feel like you can add to the community, even on the rooftop, and support those pollinators.”

In the end, they wound up using about a third of the space for outdoor living and putting the greenspace on a back burner, due to weight considerations.

Brian Bradfield, a senior project manager with Caddworks, designed the Weigelts’ complete renovation. He says rooftops are growing among Downtown properties because “it’s a way to capture outdoor space, which is very limited in most of the existing buildings, and to take advantage of the great views that Frederick City has to offer.”

Bradfield worked on similar projects since then. He says one common challenge is getting access to the roof. For the Weigelts, they added stairs from the second floor, ending in a stylish, corrugated metal-clad egress that seals out the elements and allows residents to simply step onto the deck. The shed-like feature meshes with existing architecture, including doors salvaged from the historic building beneath; it’s a focal point of the 30-by-15 space, enclosing a large TV, mini fridge and storage cabinets. 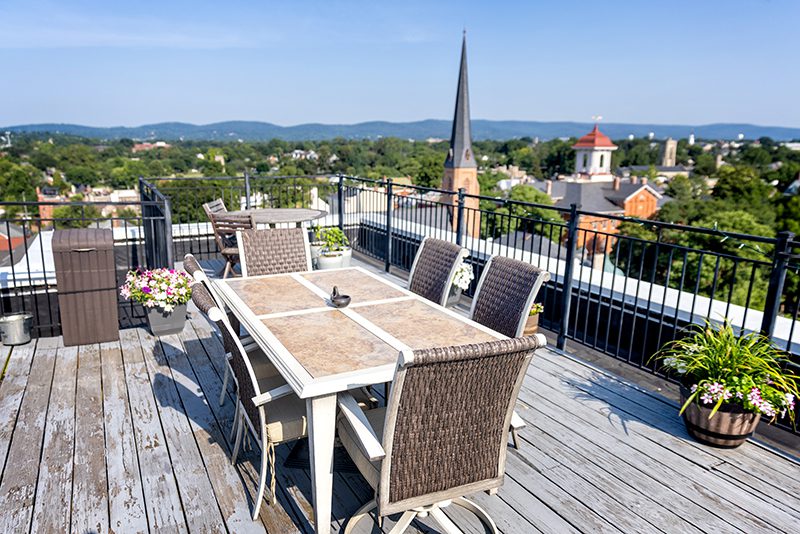 Safety is always a primary concern. Rooftop spaces need adequate railings and support below, while still allowing access for maintenance of any heating and air conditioning or other equipment located there. At the Weigelts’, there is a crawl space beneath the deck and custom-made wrought iron at the boundary, accented with planters fashioned from reclaimed wood. “It was a goal to reuse as much as we could,” says Weigelt.

A word of caution comes from Steve Knott, CSS’s general manager for the project. “You can’t just plop something down on top. It has to be anchored, so it doesn’t blow off.” Then, any penetration through the roof needs to be sealed properly, since leaks are even trickier to fix once they are blocked by a deck.

Weight is also an issue. Many roofs are only made to support a few inches of snow, so addressing structural support is crucial. It’s especially critical if a couple dozen people may be gathered in a small space that includes heavy furniture, plants and other structures that weren’t considered in the original design.

While vintage buildings, constructed with dedicated craftsmanship of masonry and solid hardwoods, are prized for both beauty and durability, they also endure decades of possible water and insect damage. Bradfield cautions, “It really depends on how they’ve been maintained over the years. … If one beam fails, they are all going to start to fail.” That could be catastrophic to the project, budget and people. 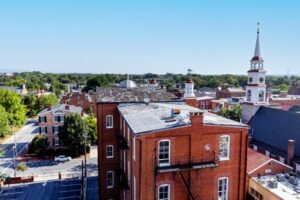 Knott’s advice for anyone planning a rooftop addition: “Assume that you are going to need to get a structural engineer involved.”The Weigelts were lucky. A 1970s renovation to their building added additional structural support. Posts in the attic anchor their deck, which uses treated lumber overlaid with synthetic wood that won’t rot or fade. To reduce weight, they opted for a relatively light, Amish-built pergola with a retractable cloth shade for respite from direct sun. Weigelt recalls that installers hoisted materials onto the roof with a crane and assembled it in about two hours. There’s also a gas fire pit for cooler days and nights.

Overall, the multiphase project went smoothly, taking about a year and a half for the complete home transformation.

“I love that it gives people a place to gather and relax and just enjoy each other’s company,” Weigelt says. She credits husband David for outfitting the space with casually elegant style. “We really like sitting up there with friends and enjoying how beautiful Frederick is from above.”

Knott has another notable rooftop project on his resume, the penthouse and private deck atop the former Francis Scott Key Hotel, now the Francis Scott Key Apartments, at 31 W. Patrick St. He beams. “When I get up on other roofs, even just for service, I can look over and see it. … It’s definitely an impressive place.”

Built in 2000, the deck there is the highest in the city. It boasts show-stopping views, particularly at sunrise and sunset as the sky blazes with intense pinks and blues striped with gold against distant mountain peaks. Turning toward Baker Park allows unobstructed enjoyment of occasional fireworks, too. Current resident Wes Sautter moved in about nine years ago. He says he is still captivated by the 360-degree views from the living space and open-air patio above.

Sautter is vice president of Creative Exterior Concepts, so he can appreciate the work that went into creating the space, as well as its value. The roomy 22-by-35 expanse easily holds more than 30 people. It is accessed by a diamond plate steel staircase through the open, loft-style living space and a Bilco hatch at the top. Sautter once hosted a release party there for a music producer-songwriter friend from Washington, D.C. He says visitors are always charmed by the broad vista. “There’s not one person who has come over and said it’s only ‘OK.’ They’ve all been like, ‘Oh my God! This is amazing.’”

For his part, it’s the perfect spot to relax after a long day. “I love grilling and hanging out on the deck.” There are strings of lights to illuminate the night and a couple of tables, including a solid wood model that’s perfect for spreading out a crab feast. A zero-gravity chair cradles its occupant like a cloud. Sautter laughs. “I fall asleep on it a lot.”

He readily agrees with Knott’s assessment. “This is absolutely the best view in town.” 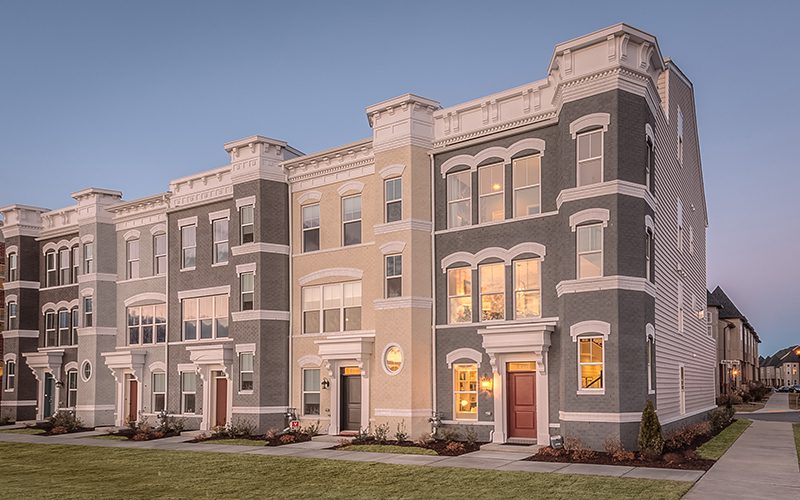 When it comes to new construction, Wormald Homes offers an array of local models with optional rooftop terraces. The company is one of the largest private homebuilders in Frederick County, known for novel architecture and thoughtful details. Ken Wormald is a principal in the family business and head of the Wormald Design Studio. He says, “We’re always trying to be innovative and responsive to the market, creating things people love.” And buyers are loving the rooftop decks available in their River Place, Vanderbilt and Georgetown communities along the city’s edge (starting in the low $400s). “You can buy them as three-story townhomes,” says Wormald, “but most people—90 percent, I think—get the loft. It kind of makes the home.”

Some models in the EastChurch community start with skylights in a covered porch that is finished with exterior drywall, transitioning to open space through an archway or cascading glass door. A traditional fireplace with a full mantel is also optional. “There are a lot of variables,” continues Wormald, describing how homeowners can personalize to their own tastes with draperies, fire pits, outdoor speakers and herb gardens to “lush-out” the place. “You can convert the top level into a master bedroom with a walk-out terrace.” 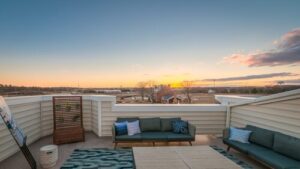 Wormald Homes uses a variety of decking materials. Some projects incorporate a porcelain tile aesthetic or a Brazilian hardwood called Ipe (pronounced EE-pay) that is naturally resistant to insects, mold, fire and decay. Alternate examples rely on a protective membrane engineered to look like wood.

Wormald says some buyers are driven by entertainment. They appreciate the indoor-outdoor flow when hosting guests. Others desire seclusion to decompress or peaceful surroundings for home office/study space. “It’s like their own private getaway at the top of the townhome.”

Whatever style or desire, Wormald insists, “Our motto is, ‘Love where you live,’ and we test all of our products through that. If we don’t love it, we don’t sell it.”

As for the Weigelts, additional rooftop greenspace is still on the wish list. “It has been nice to live with it for a little bit,” says Stephanie, “and to see what we would like to do with that.” While she and David continue researching their options, guest rooms in the converted basement are available for rent on AirBNB, including private entry and shared access to the outdoor perch. The accommodations entice guests from all over the world who come to explore regional hiking trails or indulge in Frederick’s notable restaurant scene. City Youth Matrix, the Weigelts’ favorite charity, gets 10 percent of the rental fees.

Overall, she says she wouldn’t change anything about the retreat they’ve created. “Not many people get to see that view. It gives us a new perspective of our city and makes us love it even more.”