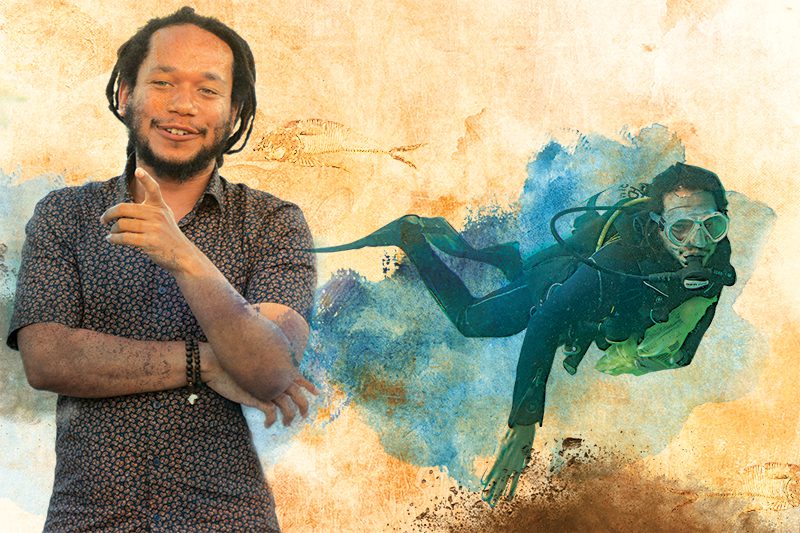 On a boat in the ocean waters off Mozambique, sometime around 2014, diver Jay Haigler presented noted under-water archaeologist Bert Ho with a challenge: “‘Where are the Black archaE-ologists?’ I asked him.”

At the time, Haigler was participating in a project looking for a wrecked slave ship with Divers with a Purpose (DWP), a group of Black divers that assists on underwater archaeological searches. “It was me, and I am African American, and Bert, who is Asian, and two white men from South Africa,” he recalls of those on the boat.

Ho accepted Haigler’s challenge, but it took him a few days to come up with an answer. “He said, ‘I’ve not only found a black archaeologist I have found a whole society of them,’” says Haigler. 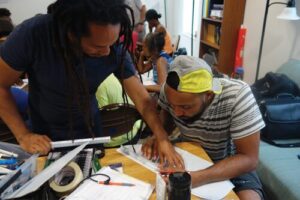 Ho was referring to The Society of Black Archaeologists (BSA) and, more specifically, Justin Dunnavant, the Frederick-raised co-founder of the organization. In Dunnavant, Ho had found an archaeological trailblazer.

Today, Dunnavant is an assistant professor of archaeology at UCLA, and, in addition to his work with BSA, consults for the Smithsonian Institution’s National Museum of African American History and Culture and its Slave Wrecks Project. He has been named to the Explorers Club’s Fifty People Changing the World and was more recently named to the National Geographic Society’s 2021 Emerging Explorer cohort as one of 15 inspiring global change-makers.

Dunnavant is a bit of a media star, as well. He was recently featured on Your Attention Please, a Hulu series described as “exploring Black voices who are part of the next generation of excellence.” Those are some lofty accomplishments for someone who is just 33 years old.

But first, let’s back up a few steps.

When Haigler returned to the United States following the Mozambique expedition, he emailed Dunnavant and the two men met for lunch. And almost immediately came to an agreement.

Dunnavant, under the tutelage of Haigler, became a certified scuba diver and a volunteer instructor, and began searching for and documenting slave shipwrecks, such as the Guerrero. The Guerrero was a Spanish slave ship that wrecked in 1827 on a reef near the Florida Keys with 561 Africans aboard.

“Now, we’re saying our history didn’t just happen on land but on and under the water,” says Dunnavant. “It brings it to another level.”

“His presence alone is changing the face of, not only archeology, but actually providing a new perspective of people of color,” says Haigler.

It is not surprising to know that Dunnavant was smart, really smart, when he grew up in Frederick. In fact, he stood out in a family of smart people, including his two older brothers, Warren and Chase, and younger sister Natalie.

When he was in the first grade at Monocacy Elementary School, his mother was called in to meet with his teacher, Yvette Streeter. Dunnavant had done nothing wrong. “She told me, ‘Mrs. Dunnavant I have taught Justin all I can,’’ recalls Sharlene Dunnavant. Streeter suggested that Justin skip a grade.

The little boy with the big smile impressed Streeter early on. “He was so curious,” recalls Streeter, who now lives in California and works in administration for a local school system there. He was also mature beyond his years. Streeter remembers telling her class jokes, and while many students would just giggle, “Justin would wink at me,” she says, “letting me know that he got the joke.”

Despite Streeter’s suggestion, Dunnavant did not skip first grade. But by the time he entered the third grade his mother had him placed in the gifted and talented program at North Frederick Elementary School. His appetite for knowledge was insatiable.

“He would jump into the car when I picked him up from school and start spewing facts,” says Sharlene Dunnavant. 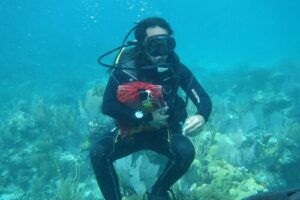 But it didn’t stop there. Once home, Dunnavant would make his way to the family’s set of encyclopedias and then write reports on subjects that he had learned that day. These reports were not required for school; he just wanted to write them. “It was kind of weird,” jokes Warren, the oldest Dunnavant brother. “But that was Justin. “

Not that he kept his head in books all the time. His two older brothers made sure of that. They were big into skateboarding and since Justin was always hanging around with them and their friends, he was, too. Pitcrew, a skateboarding shop in Frederick, was a favorite hangout spot. “He was just one of the guys,” says middle brother Chase.

But one that marched to his own beat. His family says that he was extremely frugal even at an early age. “He carried the same backpack for years in school,” says his sister Natalie. “When it got a rip, he just sewed it up.”

His abilities to budget and be self-sufficient would come in handy during his life as an archaeologist. But, curiously enough, he never considered archaeology until he went away to college. “I’ve never even seen an Indiana Jones movie,” he says.

Dunnavant skipped the eighth grade and then graduated from Gov. Thomas Johnson High School at 15. Social studies teacher Tiffiny Ford remembers him well and was impressed by what she calls his “multiple intelligences.”

Warren Dunnavant specifically recalls an incident in New York City. “We were in Midtown Manhattan about eight years ago,” says Warren. “We’re walking through the city and Justin kind of noticed something about one of the vendors, and he walked up to him and started speaking in the vendor’s native dialect. It surprised the guy immediately. And then next thing you know, they’re both conversing and laughing together. It was a really genuine moment.”

After graduating from high school, Dunnavant went to Howard University at 16. Initially his intent was to study international business, but that soon changed when he caught the travel bug. Through the university he joined a project excavating an ancient Mayan site in the rainforest of Belize. “Before that, I had never even camped out,” he says.

But he became intrigued by his experience. From there, Dunnavant would go on to receive a bachelor’s degree in history and anthropology from Howard and a master’s degree and doctorate from the University of Florida. He then held a postdoctoral position at the University of California, Santa Cruz, and more recently completed a postdoctoral project at Vanderbilt University. Dunnavant has done archaeology work in Jamaica as a Fulbright Scholar and in Ethiopia, Tanzania, Mozambique and The Gambia. But it was his experience working on a Buffalo Soldier archaeology project in Texas that especially made an impact on him, he says.

Buffalo Soldiers were originally members of the 10th Cavalry Regiment of the U.S. Army. The nickname was given to the Black Cavalry by Native American tribes who fought in the Indian Wars. 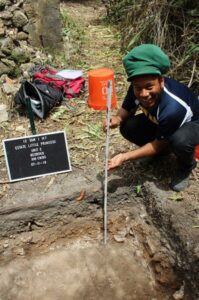 “We were working with kids from the local reservation and our advisor had coordinated this joint project where you had Black kids and indigenous kids working on a site essentially of Indian removal in the West,” he says. “Dealing with that complex relationship with how Buffalo Soldiers were tasked with pushing Native Americans out of the West under the U.S. government. All of that came together and it was like, wow, there’s a whole other history that we don’t even talk about.”

In digging for artifacts, Dunnavant was discovering a truth. And he was not alone. While at the University of Florida he would meet Ayana Flewellen, a kindred spirit. The two became friends.

“Our knowledge of Black history in this country is very limited,” says Dunnavant. “It’s not just limited in terms of what they put in books. But it’s limited in terms of what resources we have access to tell that story. Most of our history books are written off archives and what was actually, physically written down and the problem with that, of course, is that we often didn’t have the opportunity to write down a lot of our histories. For me, doing the archaeology provides us with another potential archive to explore, to tell a fuller aspect of that story.”

Dunnavant and Flewellen wanted to help tell the story not being told. With that purpose in mind, the two created The Society of Black Archaeologists. Membership has doubled in the nearly 10 years since it began.

The Estate Little Princess Maritime and Terrestrial Archaeology Field School seeks to train young people in archaeology on land and sea while investigating Danish slavery in the Virgin Islands. The program, co-founded by both Dunnavant and Flewellen, is built around the excavation of an 18th-century Danish plantation in St. Croix. “It’s one of the larger ones on the island, and we really built it around this idea of understanding what life during slavery was like under Dutch colonialism,” says Dunnavant.

Dunnavant is also conducting research of his own, looking at the relationship between ecology and enslavement in the former Danish West Indies. He is writing a book on the subject, as well. “I am looking at the ecological shifts that happened during the slave trade that has led to what we see as climate change and environmental degradation,” he says.

“The entire landscape was completely shifted during this period of slavery,” says Dunnavant. “The goal was to build mostly sugar and cotton plantations and some tobacco, which means they had to clear-cut as many forests as possible so they could have large swaths of land for agriculture. As a result of that, it led to rapid-increase erosion. It led to reduced rainfall. It led to extinction of certain types of plants and animals.”

Back home in the United States, Dunnavant is also conducting research in Africatown in Mobile, Ala.

According to Dunnavant, Africatown was founded by people who came on the slave ship Clotilda, which was recently discovered off the coast of Alabama. The Clotilda is considered to be the last slave ship to enter the United States. A few years after the ship arrived slavery was abolished and people from that ship, now free, returned to where the ship had dropped them off and established a community.

Dunnavant is surveying the Old Plateau Cemetery in Africatown, among other projects. “I honestly think Africatown will be one of the most significant sites in the 21st century,” he says. 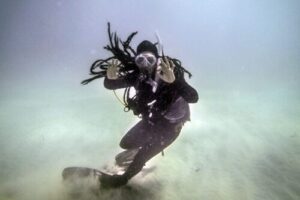 The research in the Virgin Islands and Alabama were recently featured in a cover story in American Archaeology Magazine.

“Justin is already the leader of a movement,” says Haigler. “So, 50 years from now he will have been responsible for the creation of institutions. His legacy will be an institutional legacy. That being said, that legacy will actually, I think, reorient the thinking of specifically African Americans, but generally people of color.”

His first-grade teacher is not surprised in the least that the child who was so curious and smart and winked at her jokes is setting the archaeological world on fire.

“I knew Justin was special from the beginning,” Streeter says with a smile.