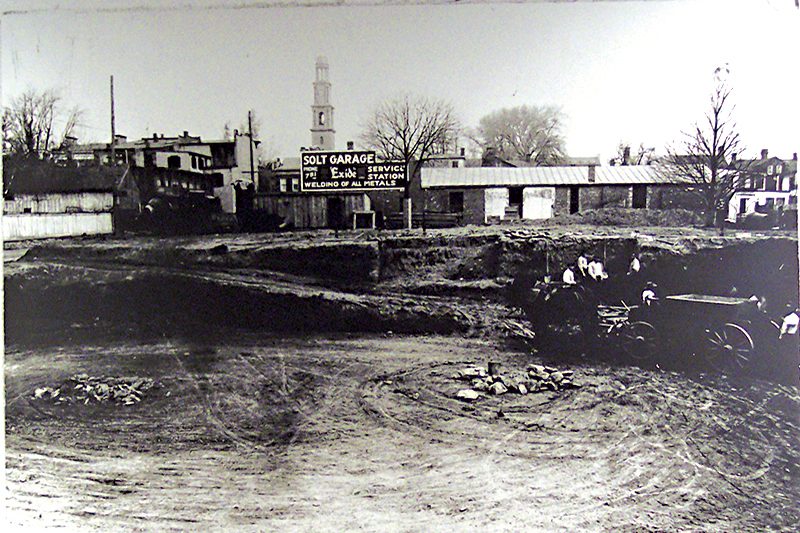 National Postal Worker Day takes place every year on July 1. In keeping with that theme, this month’s photo is of the excavation site for the old Downtown Frederick Post Office. The original building was built in 1917 at the corner of East Patrick and North Carroll streets (at the time an extension of Chapel Alley). From 1902 to 1917, a smaller post office had operated out of the first floor of the Masonic Temple at 22 W. Church St., today the home of The Temple cosmetology school. After 60 years in the “new” postal building, however, Frederick had grown again and needed a larger post office. Between 1977 and 1978, the current post office on East Patrick Street was constructed just behind the previous building, which stood dormant for several years.

Plans to demolish the original post office resulted in public outcry, so the U.S. Postal Service agreed to three rounds of soliciting bids to renovate and sell the building. Several proposals were received, but the plans to refurbish and repurpose the 1917 building proved to be impractical. In 1983, the building was demolished to create the parking lot in front of the current post office. Before the building was demolished, it was surveyed in 1981 as part of the Historic American Buildings Survey as an example of a federal post office in the neoclassical revival style. At the time, the structure was described as generally intact but deteriorating. The report concluded that impediments to converting the building were repairs from removing P.O. boxes, minor water damage and adding air conditioning.