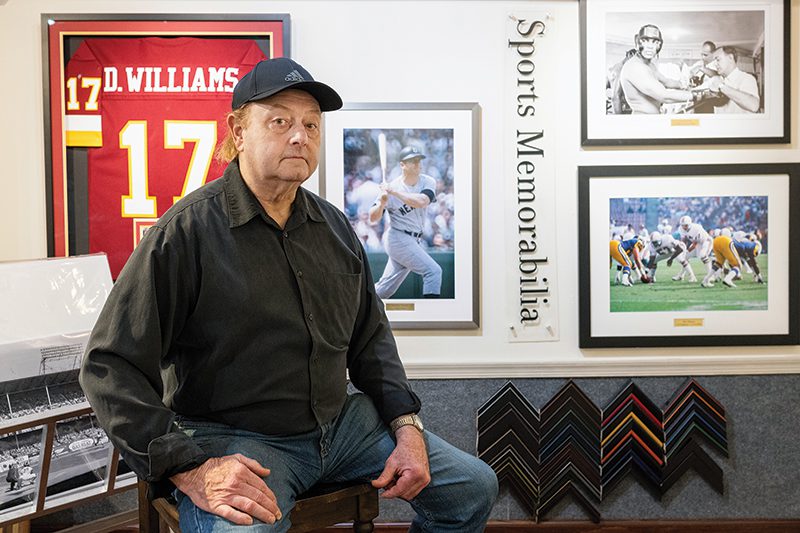 In his decades behind the lens, Carl Kidwiler was mindful of the proper shutter speeds and other crucial mechanics. But, even more importantly, “I always tried to make the person feel like he was there,” whether it was seeing the grimace of a pitcher hurling a ball across home plate for the final strike or a pile of players fiercely grasping for the football at the bottom of a heap.

Kidwiler, now retired from crisscrossing the country and selling his photos as a freelance sports photographer, remains determined to evoke the feelings of being there by making his images available to sports fans, as well as those who appreciate the art of photography.

Jennifer Elveton, owner of ArtistAngle Gallery at 124 S. Carroll St., has carved out a corner of her gallery to feature Kidwiler’s work as well as prints from his extensive collection of old negatives, including black-and-white photos of a fresh-faced Mickey Mantle and a young Cassius Clay, who would soon be known to the world as Muhammad Ali. “I have really enjoyed working with Carl. His knowledge and passion for sports has made learning about the collection, the players and the photography fun and interesting,” Elveton says. 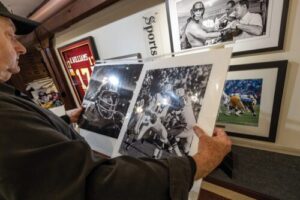 “A lot of these photos were taken at a very different time in the sports world. Many are taken from negatives and captured the real grit of the sport. … The photos are stunning,” she adds. “A lot have never been seen before. … In addition to providing enjoyment, sports have always been a large part of our American family culture. The tradition of sports has always united us.”

Kidwiler came to the Frederick area when his father was stationed at Fort Ritchie in nearby Cascade. He attended Towson State College, majoring in communication and film, which sparked him to pick up a camera. He also recalls time spent in his dorm room trying to find published sports photos, including one of the Colts when they were still in Baltimore, to add to his collection.

“There was no photo credit, so I called the Colts, and they gave me the name of the guy. I tracked him down and asked him if he was interested in selling his negatives.” He was and through the years Kidwiler has amassed many thousands of negatives.

In some cases, he got there too late. “Families had thrown the negatives in the garbage—what a loss to history,” he laments. “And there were some who didn’t want to sell and that was certainly their prerogative.” He especially treasures a photo of Mantle, who spent his career with the New York Yankees.

“For football, my favorite is an action shot of a New York Giants game. In these photos you could see the way it used to be, the uniforms, the helmets, the stadiums. You could definitely tell the era.”

When it came to his equipment, Kidwiler was partial to a Canon with a variety of three lenses, the long lens being “the workhorse,” which “today would cost the national debt to buy,” he says. He started out with one camera body and had to keep switching lenses, eventually working with three bodies. Toting all that equipment—one lens can weigh up to 10 pounds—tends to take a cumulative toll on many veteran photographers, but Kidwiler says he has no residual back, neck or shoulder pain. “I was into body building,” he says, which helped.

In the heat of trying to get the perfect shot, he sometimes had to evade foul balls or would get called out for being in the wrong spot. “I came close to being beaned. You get so involved, you sort of” lose track, he says. Were officials nice about cutting him slack? “Sometimes they were, sometimes they weren’t,” he says with a smile.

Not all his images were of the field action. Sometimes he would shoot photos of fans in the stands. “There were some in some strange get-ups. I remember out in Oakland a fan who was dressed like a member of Kiss.”

As a freelancer, Kidwiler would contact various publications “to see if they needed a photographer, which freed up the staff photographer.” Much of what he shot was used in features later in the week rather than breaking game stories, which gave him greater leeway in turning the film into photos. His film of choice was Kodachrome slide film, which was discontinued in 2010 after nearly 75 years in use. “The color was so great, the clarity, too. It all just bounced back at you. Of course, everything is digital now.” 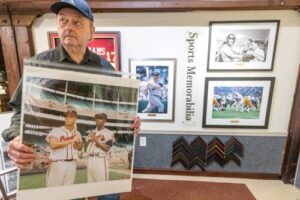 The home of the Baltimore Orioles and Yankee Stadium in New York were two of his favorite stadiums, and he loved shooting in both the baseball and football stadiums in Pittsburgh. “When they tore down Yankee and Memorial stadiums and some of the others, it was a sad day,” he says.

The camaraderie among the shooters is something he treasures. “You got to know the photographers since you would see them most every weekend. Some kept to themselves, but we would have birthday parties in the lounge; someone would bring a cake.”

Kidwiler also struck up friendships with some of the players and never tired of hearing their stories. “I remember one telling me about the game where a Mantle baseball hit the light tower in Yankee Stadium. It was an incredible distance, and no one did it again … or those Willie Mays’ catches in the outfield,” including the New York Giants center fielder’s famous over-the-shoulder snag in the 1954 World Series, considered the greatest catch in baseball history. “I wish I could have been there at those moments,” Kidwiler says.

Today, after “30-some years as a photographer fighting traffic, catching trains” to get to the games, Kidwiler sits at home and watches on TV. But even as he relegates himself to taking mainly scenic shots—“I love covered bridges. They were built by real craftspeople; each one has a different personality”—he is doing what he can with his ArtistAngle Gallery exhibit to focus attention on yesterday’s sports. “I hope it would show what sports really looked like in an era and a time when things were a lot different.

“We have several anniversaries this year,” he says, including that 1951 was the rookie season for both Mantle and Mays and 1961 featured the famous home run race. It occurred between Mantle and Roger Maris, who were trying to beat Babe Ruth’s record of 60 home runs set in the 1927 season. Maris eventually broke the record.

“People are looking to bring back fond memories,” Kidwiler says, recalling conversations he has had with people telling stories about attending games with their fathers. “There’s a smile on their face. It’s good memories.”