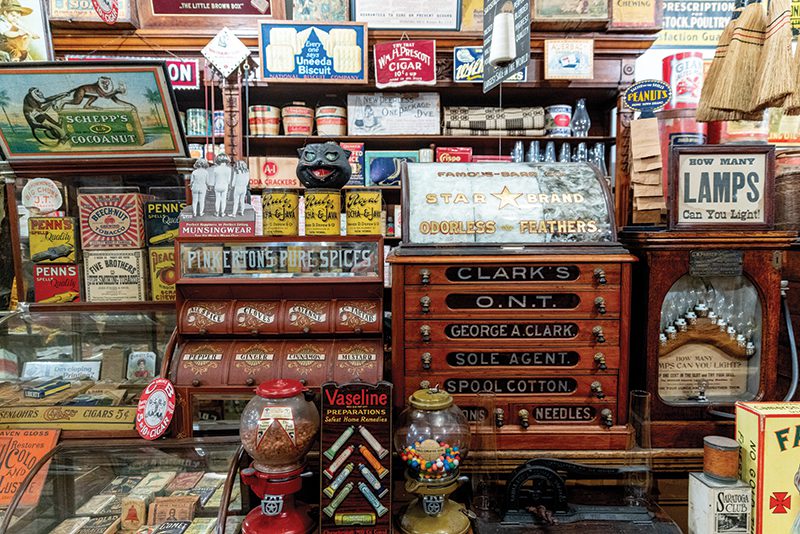 Step into W.R. Rudy’s Country Store and Drugstore Museum, located on Main Street in Mount Airy, and you will take a trip back in time, a time travel to a simpler world, where the bright colors and detailed artistry will bring a smile to your face.

When Howard Parzow purchased the W.R. Rudy’s building in 1976, it wasn’t the culmination of a lifetime dream, but the launching point for a collection named one of the best in the United States by the Antique Advertising Association of America. “I knew from the day I saw this building that I wanted to bring it back to life as a museum,” says Parzow. 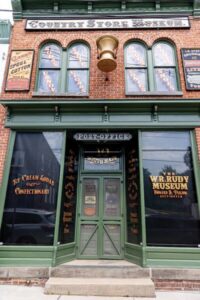 Originally, Parzow found out about the building because the previous owners used it to host auctions. An auctioneer himself, he went to the building and picked up several pieces for his own collection. He also gave the owner his business card and told her he would be interested in purchasing the building if she ever decided to sell. She did.

After an extensive rehabbing of the building that included historical renovations, Parzow filled it with period pieces. Already an avid collector, Parzow spent countless hours researching what Rudy’s Country Store carried, even painstakingly poring over original ledgers of inventory to establish the existing museum.

Parzow, who now travels extensively for his auctioneer business and to the auctions of antique collectors as a buyer, has the luxury of selecting only the highest quality pieces that are in the best condition, and as he puts it, “right” for his museum. His extensive historical knowledge and anecdotal stories are as much a goldmine as the museum collection itself.

The museum is an unbelievable trove of yesteryear, spanning from 1888, when the building was built, to as late as 1930. Historically, small town stores carried a variety of products, because of the ability or inability to have goods delivered regularly. W.R. Rudy’s has a veterinary section, with both livestock and small pet feeds and medicines, many housed in handmade wood cabinets with brightly colored hand-painted or lithograph pictures of animals on the fronts.

As a drugstore for humans, the museum houses many concoctions guaranteed, at least by their manufacturers, to work wonders. “Prior to the [federal Pure Food and Drug Act], many claims were allowed,” says Parzow. Tonics and purifiers, elixirs and restoratives, restorers and potions all could make outrageous claims until then. The benefits of food quality regulations are easily understood today, but it is nonetheless charming to see all the snake oil claims on packaging from earlier days.

The museum also houses an original marble-topped soda fountain from 1898, at the front of the “store” where it was typically placed during that time period. As testimony to the one-stop shopping of a general store, it also houses a post office. An upright Nickelodeon with a stained-glass front and a peep window into the hammers and strings is a showpiece by itself.

Penny candies in original ground glass jars from the 1920s, tobacco tins with the original tobacco in them (some of the first of Parzow’s collectibles from when he began collecting at age 22) and handmade dye cabinets line the counters. 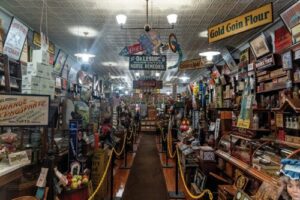 Parzow explains how general stores/drugstores were a total shopping experience for people at the turn of the century. “Small towns had to have a place where people came to get everything they needed,” he says, pointing out a stunningly colorful display of seed packets. From toiletries to kitchen supplies, laundry items to needles and threads, and toys to food items, the old-time general store had it all.

The original W.R. Rudy’s was a place for townspeople to gather with their instruments and make music, a community hub where people could socialize and have a good time. Today, Parzow entertains differently; instead of music, story after story recounted by him captivates museum guests. Chock full of facts and fascinating tidbits of both the historical period and the specific pieces in the museum, Parzow is a font of information. “I studied the history of drugstores, general stores and soda fountains in the United States, to make sure every piece is authentic,” he says. This has resulted in an attention to detail, obvious in placing of products and pieces in the mint-condition glass display cases with curved glass and on the tall solid-wood shelving.

The museum sees about 2,500 people come through its doors each year. “Visitors come from all over the country,” says Parzow. “We get family reunions, trade associations, small groups of friends who have heard about the museum, just all kinds of people from all over.” W. R. Rudy’s has been the subject of documentaries and news reports, showcasing the incredible depth and breadth of his collection.

Without question, W.R. Rudy’s is a delight to the senses and a curious nod to the past, even if you don’t consider yourself a history buff. The whimsicalness of the museum may come as a surprise to some. If you are expecting a static experience, prepare to be thrilled by the state-of-the-art tech of its day. In an age where there was little or no electricity, mechanical props were plentiful. From the fan that sits on a counter and rotates to the moving eyes of a doll designed to catch the attention of window shoppers and draw them in to the incredibly lively Nickelodeon, the W.R. Rudy’s Country Drugstore and Museum is a sound-and-sight show. 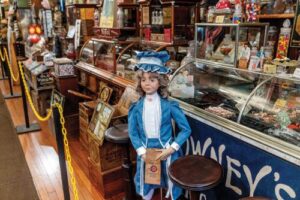 Parzow is most excited and proud of being able to pass down the rich history of the museum; the general store, drugstore, soda fountain combination that was the cornerstone of small towns throughout the country in the late 1800s and early 1900s. The museum has seen Boy Scout and Girl Scout troops come through, as well as school tours. “Watching people’s eyes light up is so wonderful,” says Parzow, explaining the joy he receives from sharing his love of the museum and its history.

With no plans on the horizon to retire, Parzow says he’ll contemplate selling when the passion is gone. But watching the twinkle in his eye as he shares the origins of a particular museum piece, don’t expect him to leave any time soon.

The museum, which is open for tours by appointment only, sells no other merchandise, not even penny candy. “I didn’t want to nickel-and-dime people with small stuff,” says Parzow. Some might see that as a marketing opportunity lost, but spend an hour with Howard Parzow, and you will walk out with something much more valuable than a T-shirt: a moving, brilliant picture in your head of the history and stories of a bygone era.

And that is priceless.