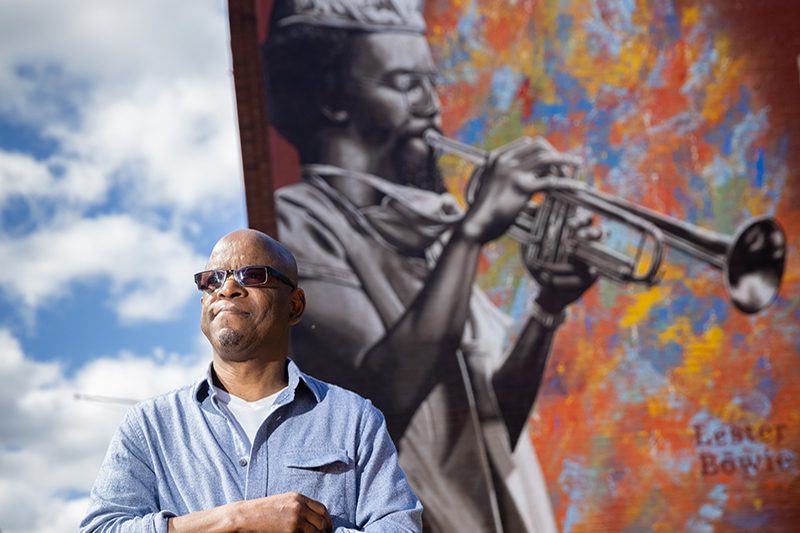 Jazz icon Lester Bowie was born near Frederick in 1941 before moving to St. Louis and later Chicago where he launched a successful career as a trumpeter and composer lasting more than 40 years. He passed away in 1999. Frederick County native and internationally known bass player Scott Ambush, who performs with the jazz fusion group Spyro Gyra, shares his remembrances of the legendary musician.

Scott Grove: How large a figure was Lester Bowie in the jazz world?

Scott Ambush: He was highly influential. Perhaps not as widely known as trumpeters Dizzy Gillespie or Miles Davis because he was of the next generation. Also, much of the music he composed and performed was of an experimental nature or considered avant-garde. Though not as well known in some circles, music critics, Jazz aficionados and other musicians definitely appreciated his work. He worked with everyone from blues greats Albert King and Little Milton to David Bowie.

Scott Grove: You knew him and performed with him. What were the signature musical attributes that made him so successful?

Scott Ambush: Actually, we are distant relatives. My Aunt Margaret was a Bowie. Having said that, I didn’t know him especially well. Again, generational differences. I knew him and his music before I knew that we were related. We only performed together a handful of times, unfortunately. Lester had a deep understanding and command of his instrument, and of the music that he played. He coupled that with the desire and ability to cross any perceived musical boundary, whether it was in style or repertoire.

Scott Grove: I saw that Lester recorded 22 albums under his name and performed on approximately 40 more with the Art Ensemble of Chicago. He was an entertaining performer to watch. Was wearing the white lab coat another one of his signature trademarks?

Scott Ambush: It was! I think he took the music very seriously but didn’t take himself too seriously. The lab coat was a symbol of the experimental nature of his approach, and that music at its highest practice is akin to alchemy—combining elements to produce something greater than the sum of its parts.

Scott Grove: Do you think the new public art mural at Carroll Creek Park and South Market Street captures him?

Scott Ambush: I do. The likeness is undeniable, and the splashes of color are very representative of the colors of music and the joy he brought to it.

Scott Ambush: Actually, on a more familial note, Lester’s brother and trombonist, Joe, leads a band called Defunkt, which has been in existence since 1978 and has released some 20 albums. Almost everything that I mentioned about Lester and his approach to jazz and the avant-garde could be said about Joe and his approach to jazz and funk music. I encourage your readers to check him out. Also, there was a third brother, Byron Bowie, a great saxophonist in his own right.

Scott Grove: Share a little about your career. When did you start playing bass and who were your musical influences?

Scott Ambush: I started at 12 years old. My earliest influences were rock musicians like Hendrix, Cream, Black Sabbath, and funk and rhythm and blues bands like Parliament-Funkadelic, The Isley Brothers, etc. I was introduced to jazz through fusion bands like Return to Forever.

Scott Grove: How and when did you make the leap into the professional music business?

Scott Ambush: Though I did gigs not long after I started playing, I began in earnest in my early 20s while at the University of Maryland, College Park: Psychology during the day and the D.C. music scene at night.

Scott Grove: Were you still touring with Spyro Gyra when the pandemic halted live performances?

Scott Ambush: I was. In fact, I woke up in Tula, Russia, to news that President Trump had just announced that he planned to close the U.S. borders. We still had one more show in Moscow. That was a bit anxiety-inducing, to say the least.

Scott Grove: Do you have plans to perform in the months ahead?

Scott Ambush: There are a few things on the horizon. We won’t go back out on the road until late August.

Scott Grove: Do you believe any aspect of the music industry will have been permanently changed as a result of the past year?

Scott Ambush: I think that like many industries, we’ve broadened our understanding of what can be accomplished remotely, though there’s no replacement for live performances. I think and hope that people will gain a new appreciation for live music and the ability to experience music all at once in a communal space.

Scott Ambush lives near Urbana. In addition to his international touring, Ambush has performed on some 35 albums. Scott Grove is the owner of Grove Public Relations, LLC, an advertising and marketing firm. A former reporter and lifelong student of history, his work also includes interpretive planning and design for museums and historic sites. Grove is the co-creator of the Frederick Maryland Walking Tour mobile app. For more info, visit itourfrederick.com or grovepr.com.