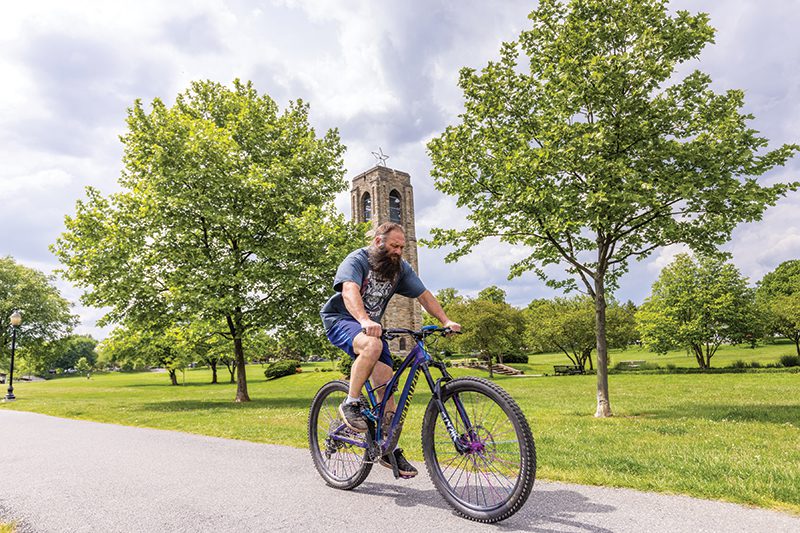 Ten Places to Work Your Muscles and Take in the Past

Let’s be honest. Working out can be a bit of a pain. You feel better afterward, sure, but an exercise routine can be hard to maintain with all the commitments of daily life. To be totally honest, sometimes mindlessly scrolling on your phone or binge watching a new show on Netflix is fun.

Frederick County, however, is able to add a great incentive to working out. With a plethora of historic sites offering everything from trails to fields, residents can not only exercise their bodies, but their minds as well. While doing a 6-mile bike ride, you can learn all about the importance of canal lockhouses during the 1800s. Walking along a trail could also lead to learning more about the role of early African Americans in iron production.

So, instead of focusing on how difficult a workout can be, you can immerse yourself in historic facts and the beauty of the area. Here are 10 of our favorites.

One of the most popular places to merge history and fitness is along the 184.5 mile C&O Canal towpath running from Cumberland to Georgetown. Locally, hikers, cyclists and joggers head to Brunswick and Point of Rocks where they can traverse the dirt-and-gravel path right next to the drained canal which has been overtaken in spots by thick vegetation.

Taking nearly 25 years to build, the canal was finished in 1850 and utilized mule-drawn boats to transport goods throughout the region. Overall, the national park includes more than 1,300 historical structures. Some of the local ones not to be missed while burning calories include Lockhouse No. 28 in Point of Rocks, the Monocacy and Catoctin aqueducts, and the Point of Rocks railroad tunnel and train station.

Visitors can choose from seven different trails of varying difficulty that tell portions of the 1864 battle that saved Washington, D.C., from the Confederate army. Established in 1976, Monocacy National Battlefield south of Frederick educates visitors how the greatly outnumbered Union army was able to delay Confederates’ march to the nation’s capital, allowing time for critical re-enforcements to arrive.

While some of Monocacy’s trails give scenic overviews of the area, others show key parts of battle. Named for the family that over saw the property, the 1.5-mile Best Farm Trail meanders around where Confederate soldiers engaged Union troops guarding the bridge over the Monocacy River. The 1.75-mile Thomas Farm Loop Trail shows where some of the heaviest fighting of the battle took place. A month after the bloodshed, Gen. Ulysses S. Grant stayed at the Thomas home and hosted a council of war there.

Baker Park has affectionately been dubbed “Frederick’s Front Yard” for years and you can’t help but understand why when going to the 58-acre spot on a gloriously sunny day. Walking paths meandering throughout the park are usually bursting with folks looking at sites like Carroll Creek, Culler Lake and the 49-bell carillon tower.

The park’s land dates back to the city’s beginnings with the section of North Bentz Street serving as the site for the Old Town Mill built in the late 1700s and stood until the 20th century. The Mountain City Creamery was torn down in 1910 to make room for the building now known as the William Talley Recreation Center.

In the mid-1920s, the City of Frederick began acquiring land to create a municipal park. When two more properties were needed, philanthropist and area businessman Joseph Dill Baker bought and donated the parcels to the city, which dedicated the park in his name in 1927.

Erosion over 14 million years took away surrounding land in southern Frederick County, but a mountain known as a monadnock remained providing spectacular views of the area. Named by European explorers in the early 1700s for its “form of a loaf of sugar,” Sugarloaf Mountain reaches an elevation of 1,282 feet and features quartzite along its rugged cliffs.

The site proved useful during the Civil War as a lookout spot. In 1862, Union troops saw the Army of Northern Virginia cross the Potomac River into Maryland. Through signal stations, Union officials were alerted to the Confederate invasion.

Around 2,000 acres of the area were privately bought by businessman Gordon Strong over the course of several decades in the early 1900s. The site was an early favorite by Presidents Franklin D. Roosevelt and Harry Truman to become the presidential retreat Camp David before Strong vetoed the idea. After Strong’s death in 1954, the land was deeded to his corporation with the mission to teach an appreciation for nature’s beauty. Open to the public, the trails are popular spots for folks looking to do easy, moderate or difficult hikes.

More than a century ago, Frederick County was known as a hotspot for limestone. In 1907, Leonard Barrick bought the area today known as Fountain Rock Park in Walkersville as a supplementary limestone quarry to his Woodsboro plant. Those who visit the park today can walk a .7-mile trail to see the remains of the original lime kilns. The path also borders a portion of train tracks that date back to 1872 used by the Pennsylvania Railroad to transport local dairy farms’ goods and passengers to Frederick. Today, the line is used by the Walkersville Southern Railroad for passenger and special event fares.

For those who want to get more distance on the trails, take a short car or bike ride to Heritage Farm Park, which also shares a border with the train tracks. As you enter the park, be sure to look left as the main house of the Harris Farm dates back to 1855 and is on the U.S. National Register of Historic Places. Once inside the 50-acre park, there are a number of walking trails (outer loop totals 1.57 miles) that meander around an 18-hole disc golf course and youth sports fields.

Whether you just want to take a leisurely walk to enjoy nature or test yourself on advanced trails while traversing nature’s roadblocks of rocks and trees, Cunningham Falls State Park is a great spot just off U.S. 15 in Thurmont.

In the 1770s, Thomas Johnson, who would later become the state’s first governor, discovered hematite ore in the Catoctin Mountains. By 1776, the Catoctin Iron Furnace was built and producing pig iron. Over the years, the furnace made cannons and cannonballs for George Washington’s army, stoves and car wheels. Closed in 1903, the remains of the furnace can still be seen today.

While the historical records mainly discuss the lives of the owners, managers and their families, the contribution of enslaved African Americans to iron production was critical to the area’s success. To honor their work, the Catoctin Furnace Historical Society opened the African American Cemetery Interpretive Trail last summer which stretches from the furnace ruins to an overlook for the gravesites. First discovered in 1979 during highway construction in Thurmont, the cemetery is home to 35 graves with the possibility of 30 to 35 more. Most of the graves only have first names inscribed so information on those buried is limited.

Out of the 2,168 miles of the Appalachian Trail running from Georgia to Maine, nearly 41 of the miles come through Maryland. With easy-to-moderate trails and elevation ranging from 230 to 1,880 feet, the state’s portion could be hiked in an estimated three to five days.

Though we may be biased, the Frederick County portion is one of the most spectacular parts of the trail due to its historical nature. On the Frederick/Washington county line, folks will find the original Washington Monument. The 40-foot-tall structure was completed in just one day by area residents in 1827 as a way to honor the nation’s first president.

The trail also cuts across South Mountain State Battlefield which was the first major Civil War battle on Maryland soil and fought on Sept. 14, 1862, three days before the Battle of Antietam.

The Jefferson portion of the trail also hosts Gathland State Park, which features the country’s only memorial to Civil War correspondents. George Alfred Townsend, known by the pen name Gath, was one of the youngest journalists to cover the Civil War. He reported on President Abraham Lincoln’s assassination, the capture of John Wilkes Booth and the trials of co-conspirators. While researching a book idea years later, Townsend fell in love with the Jefferson area and established a home in the park building 10 structures at the site he called Gapland.

Some of the country’s biggest historic decisions including the planning of World War II’s Normandy invasion have been made in Catoctin Mountain Park. Though many of us will never get to see Camp David, it’s still interesting to know that when helicopters and fighter jets are buzzing over Thurmont that one of the most powerful individuals in the world is likely nearby, maybe taking in the beauty of Catoctin Mountain.

While walking the multiple trails inside the park, there are a number of historic structures to see. The .6-mile Blue Blazes Whiskey Still Trail discusses the Prohibition-era production of whiskey ending at the site of an actual still. In the mid-1700s, the spirit was much easier to transport than other goods grown in the mountains. But with the 1791 passage of the Excise Tax, liquor production was made in secret so producers didn’t lose profit. Around the location at the end of the trail was the site of the 1929 raid that led to the death of Sheriff Clyde L. Hauver. The .5-mile Charcoal Trail features several displays and exhibits discussing the mountain’s once-thriving charcoal-making industry, which helped to fuel the nearby Catoctin Iron Furnace.

For those who enjoy long bike rides, the northern portion of the county hosts three covered bridges within 12 miles of each other. All are listed on the National Register of Historic Places.

The original Loys Station Covered Bridge was built in 1848 by an unknown builder so travelers could cross Owens Creek. It is believed Union Gen. George Meade used the bridge to pursue retreating Confederate soldiers after the Battle of Gettysburg in 1863. In 1991, the Rocky Ridge-based structure was lost when a vehicle was set on fire while on the bridge. After a fundraising effort, the bridge was rebuilt and reopened in 1994.

The smallest of the three structures is Roddy Road Covered Bridge in Thurmont which also crosses Owens Creek. Built in 1856, the area is also a popular spot for fishing and picnicking.

A portion of the Utica Mills Covered Bridge in Frederick was actually first built on Devilbiss Road over the Monocacy River in 1843. Forty-six years later, the covered bridge was partially lost after a flood. A portion was saved, dismantled and reused to build the current structure on Utica Road. Over the years, the bridge has had extensive rehabilitation work, including after several trucks have crashed into the structure.

For those who enjoy the city atmosphere for a workout, the Frederick Visitor Center has put together a 2.5-mile, self-guided walking tour of 16 notable historic sites in Downtown.

Some of the stops are well known by residents. The Weinberg Center for the Arts welcomes local, regional, national and internationally known artists to its stage as well as playing classic movies and silent films accompanied by its Wurlitzer organ. First opening its doors in 1926, the 1,500-seat venue was the second tallest structure in the city at the time. After local church graveyards began reaching their capacity, Mount Olivet Cemetery was founded in 1854. The 32-acre site serves as the final resting place for more than 40,000 individuals, including Francis Scott Key, author of The Star-Spangled Banner. The cemetery also served as a burial ground for hundreds of Confederate soldiers whose families could not afford to transport their remains home.

Other spots along the tour are less known among locals. Ramsey House was visited by Abraham Lincoln in October 1862 after going to see the aftermath of the Battle of Antietam. The 16th president made his stop in Frederick to visit wounded Union Gen. George Hartsuff. Nearby Kemp Hall was the site where the Maryland legislature met in 1861 to decide if the state should secede from the Union. All the tour stops can be found online at visitfrederick.org.