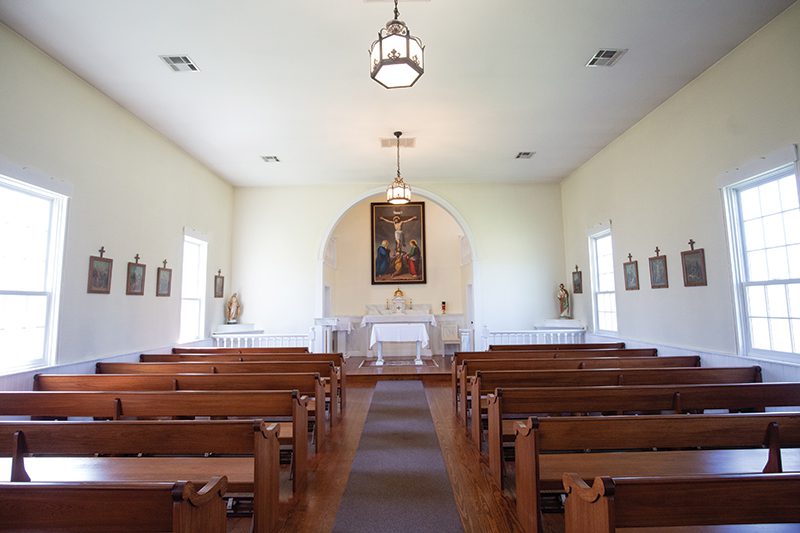 St. Ignatius of Loyola Catholic Church Branches Out and Honors Its Roots

The little country church stands like a flower blooming through a crack in the asphalt. Once surrounded by rolling hills and fertile farmland, its neighbors are an Exxon station, an auto repair shop and the exhaust from the nearby interstate. The official address of the small, well-kept white building is 8817 Urbana Church Road, but you might be more familiar with its location when you pull off I-270 at exit 26. Or you might not.

A sign in the parking lot, near the church’s graveyard, announces that weekday mass is held here Tuesday through Friday at 8:45 a.m. This is the pre-pandemic schedule. Father Michael Jendrek, the pastor of St. Ignatius of Loyola Catholic Church, says he expects to resume that schedule when the COVID-19 threat is over.  “It is my hope and expectation. I think we will be celebrating daily mass there,” he says.

Jendrek serves double duty. He oversees operations at the two St. Ignatius churches in Frederick County—this one and the main church at 4103 Prices Distillery Road in Ijamsville. The “country church,” as the parishioners call the small building, was a mission church established by the Jesuits in 1876. It holds much history but few worshipers. Its maximum capacity is 102 people. There were a handful of parishioners who attended mass here regularly with their parents and grandparents before the pandemic. They have made the transition to the new building in Ijamsville, but a little piece of their hearts—and the graves of their ancestors—remain here.

Longtime church members Betty and Mark Jeffers live close by the country church in a home they built on land that belonged to her parents. She is part of the Davis family, who were prosperous farmers in the area and very active churchgoers. As a girl, she sang in the choir, received religious instruction and made her first communion here. Betty and Mark were married in the little church 70 years ago. “Getting married. That was the best thing that ever happened to me,” she says.

The Jeffers raised their family, worshipping and socializing at the country church. So, it is only fitting that they have secured burial plots for themselves here, too. “I don’t want to wander far,” she says.

But they have wandered over to Ijamsville with several other original members of the congregation where they have welcomed newcomers to a larger church community. Membership there has increased to 2,000 families and the Jeffers are busy with several volunteer commitments. Mark is an usher and past member of the church council and Betty sings in the choir just as she did as a child at the country church. They have comfortably blended the old and the new.

The St. Ignatius of Loyola Catholic community was established as a mission in Frederick County by the Archdiocese of Baltimore in 1876. Prior to that, Catholics worshipped in private homes, including at the estate of Charles Carroll, a signer of the Declaration of Independence, who established a chapel around 1764 on his expansive plantation in Buckeystown. Church records indicate that in 1820, a building was constructed on land called Carrollton. Father Francis J. Maleve led the new church named St. Joseph on Carrollton Manor.

By the end of the Civil War a Jesuit priest named Father John B. Gaffney became the pastor at St. Joseph’s. He purchased an acre of land in Urbana for $130 and the Catholic community donated funds and labor to construct St. Ignatius of Loyola.

Over the decades the congregation grew. According to Mark Jeffers, by the 1990s the church was filled to capacity on Sundays so mass was also celebrated in the cafeteria at nearby Urbana Elementary School. It was obvious that the 415 families who belonged to the church needed much more room. In 2000, they built and dedicated a new church on a 12-acre site at Md. 80 and Prices Distillery Road in Ijamsville. It also bears the name St. Ignatius of Loyola, in honor of the Catholic saint who founded the Jesuit order of priests.

The expansive new church meets the modern congregation’s needs, while the old one maintains its charm and has its dedicated backers. Jeffers says, “It will be maintained as a chapel. People keep donating to it.”

The headstones in the graveyard adjacent to the church reveal the names of the earliest members. Several members of the Davis family, including Betty’s grandparents and great grandparents, are buried here. There are generations of the Murphy, Henrickson, Verdi and Jamison families here, too. This is the final resting place for the families of farmers, builders, landscapers and at least one Confederate soldier. An iron cross marks the grave of Col. Luke Tiernan Brien, who was the chief of staff to Gen. J.E.B. Stuart, according to church records.

Mary Jane Dudderar tracked the names and stories of the families in the graveyard. She compiled a book complete with a spreadsheet of names, dates and photos of headstones. The Catholic Community of St. Ignatius of Loyola, Urbana, Maryland, The Cemetery 2001 is a spiral-bound, self-published book. It contains both documented facts as well as stories and recollections from church members. The book project was a labor of love for Dudderar who was baptized in the country church. “I reproduced the book and we sold it at fundraising events and donated all the money back to the church,” she says.

The Toodle family shows up in Dudderar’s book and in other written and oral histories of the church. The African American family worked as tenant farmers and were active in the church from its very founding. Ignatius Toodle is mentioned by current church members and in a booklet, History and Legends of Urbana Election District 1976, compiled by the Urbana Civic Association. Ignatius was said to have raised funds for or contributed labor to build the original church. His extended family was so well-known that the land they lived on and worked near Ed McClain Road was unofficially dubbed Toodletown.

Strangely, there is no headstone for Ignatius Toodle in the graveyard. In fact, there are no public records for the legendary man. Mary Mannix, manager of the Maryland Room at the C. Burr Artz Public Library in Frederick, says Ignatius may have been a nickname for one or more of the male Toodle family members of the time. And, she says the lack of a paper trail for Ignatius does not diminish the impact of the Toodle family. “The fact is that he is attached to that congregation, that they have this oral history. He exists in the memory of the church. It demonstrates the role of this African American family in the memory of the church and stands for all African American people who have vanished from the historic record.”

In 2012, Father Jendrek oversaw a major renovation project at the country church. New floors and mahogany pews were installed. The lighting was updated, a painting of the crucifixion that hangs above the altar received a cleaning and the walls welcomed fresh coats of paint. But the building still has no plumbing. Jugs of water are brought in for baptisms and Dynamic Auto Service across the street is a good neighbor, allowing churchgoers to use restrooms.

The church stands ready to accommodate special events such as baptisms and small weddings. In fact, Jendrek says two weddings were held in the last year despite the pandemic. He says the parish is happy to make the cozy space available to Catholics or groups from other faith traditions for special services or events.

Jendrek has left his mark on the church with the renovation project. Soon he will be wandering from St. Ignatius, but not too far. Next month he takes on the responsibilities as pastor of the Holy Family church in Davidsonville, Md., after serving at St. Ignatius of Loyola for 13 years. New church. New challenges. He says he hopes he will be remembered “as a loving pastor at our Catholic community and the greater community.” And he knows he will return. He and his companion Suzie the cat plan to be added to the official spreadsheet and buried in the graveyard next to the country church.