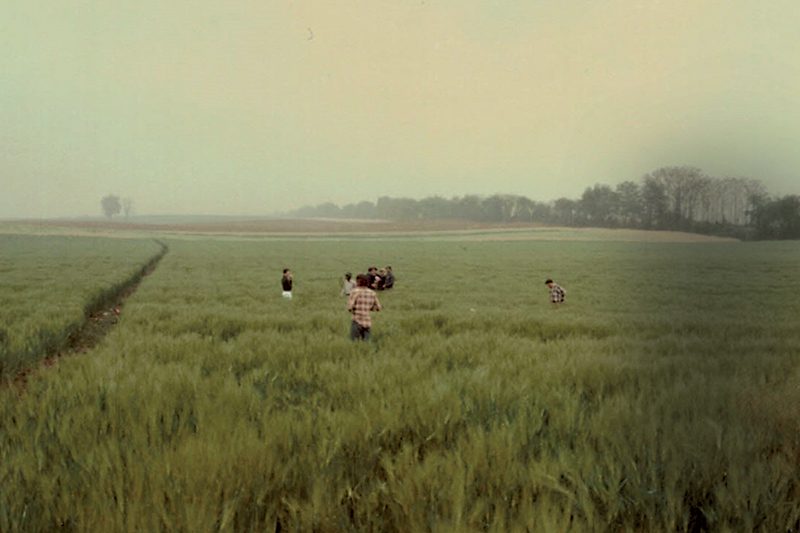 Forty Years Ago, the Skies Above Walkersville Turned Tragic

By By James Rada Jr. | Photography by Photographs courtesy Vaughn Zimmerman | Posted on 05.12.21

For those in the Walkersville area, a thundering boom interrupted the gray, drizzly morning of May 6, 1981. Could it have been a lightning strike?

Pat Hamilton knew it wasn’t lightning, although she wasn’t exactly sure what the blast meant. She was helping her husband load a truck when she heard an explosion. “When I heard the noise I looked up, it had burst into flames, and it was still up in the air. It looked like it was just about four houses down from us. I think it was extinguishing itself as it came down because then all I could see was a huge black cloud,” Hamilton told The [Frederick] News at the time.

Paul Green Jr. and his wife also heard the explosion. When they looked outside, they saw black smoke rising from a field they farmed. They thought it might have been a train wreck, since the Maryland Midland Railroad ran along the edge of the field, so they climbed into their truck to investigate.

“At first, we thought it was a train, but then we saw pieces of wing, a big tire, and parts of the landing gear. We began walking along the fence row, and we came across something thought to be part of a body. We just stood still and waited until the ambulances got there. It was just awful,” Green told the newspaper.

The first emergency workers on the scene were Vaughn Zimmerman and his crew from the Walkersville Ambulance Station, where they received the call about a plane crash. Without an exact location yet known, they simply sped in the direction of the black smoke north of town, near Devilbiss Road.

Zimmerman had no idea what type of aircraft had gone down or what the emergency crews would find. “Once we climbed the fence and went into the field, we had barley up to our knees,” Zimmerman recalls. “Then we started finding bodies.”

Forty years after a military plane slammed into a Walkersville farm field, killing all 21 on board, the vivid, sometimes-graphic memories remain for those on the ground that day. 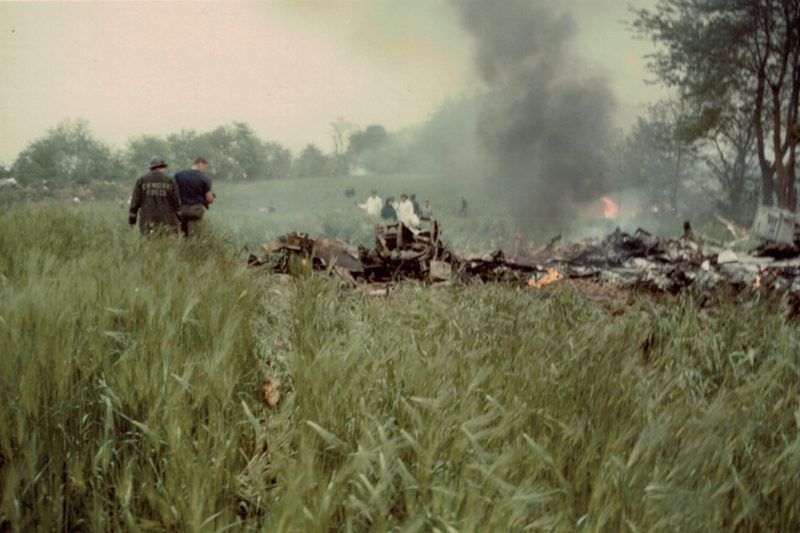 The plane was callsign AGAR 23, a U.S. Air Force EC-135N surveillance jet—a model often described as a Boeing 707 for the military. It took off from Wright-Patterson Air Force Base near Dayton, Ohio, at 10:05 a.m. on a training mission. Twenty-one people, including the two pilots’ wives, were on board.

Forty-five minutes after takeoff, the plane was traveling eastward above Frederick County when it dropped off radar as it suddenly rolled and nosedived from 30,000 feet. The plane plunged toward the ground at 400 mph for 90 seconds and began breaking up at about 5,000 feet. It exploded shortly before crashing into the Walkersville field.

“The crew did not have time to relay anything or might have been incapacitated due to a number of things causing the breakup of the airplane very rapidly,” John Galipault, president of the Aviation Safety Institute, said at the time.

John Luntz was driving a locomotive engine along the tracks when he heard an explosion. He leaned out of the cab to see what had happened, but he couldn’t see anything because of the fog and rain. Then he heard a second explosion. A few moments later, The Gettysburg Times reported he came across debris and bodies on the track.

“The smell of the burning bodies was terrible. I was afraid to walk, as the rye, I think that is what it was in the field, was about waist high and I didn’t know what I might find,” Paul Green Jr. told The News.

Chip Jewell, now retired as director of the Frederick County Division of Fire & Rescue Services, was a young fireman on the scene at the time. He recalls seeing the 10-by-10 nose cone from the plane, which fell in front of the locomotive.

Zimmerman directed the arriving crews, established their priorities, and tried to determine what the situation was. Brush units from Walkersville and Libertytown arrived and went to work getting the small fires under control. Other fire and rescue units arrived to help. “Many of them left when it was obvious they weren’t needed to put out fires or rescue anyone,” Jewell said.

There was talk that the plane was military, but there had been no confirmation and no one could tell from the debris. “The plane had nearly disintegrated in flight, scattering, and debris was spread over a few acres,” Jewell recalls. He rode with a Woodsboro Rescue Squad crew that day. “It floored me that something that big could crash and there wasn’t much there.”

He recalls an eerie scene. “It was a foggy, misty day, and there was little noise. Small fires were burning here and there, but there was no huge fireball of wreckage. The area smelled of burning fuel.”

When it became obvious there were no survivors, a search team was put together to mark where all the debris and human remains were. As people walked in a line, they would raise their hands and someone would come over with a wooden stake to mark the spot.

“It was pretty evident once we were in the field that we weren’t going to find nothing but small pieces.” Zimmerman says. 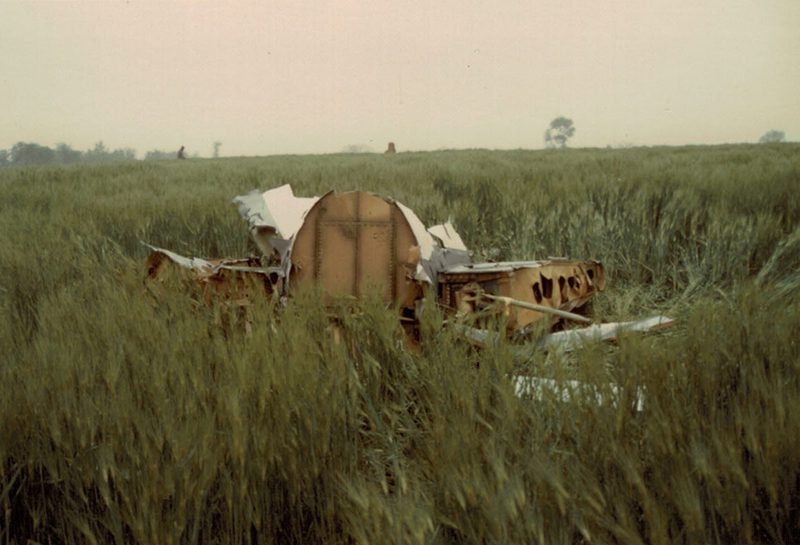 When Zimmerman returned home the day of the crash and saw pictures of the Air Force plane on the television, he couldn’t believe that a plane that size was the same aircraft that crashed into the field because of the lack of debris.

One exception was the cockpit, which was later found buried 30 feet in the ground in a crater. The military brought in a backhoe from Ft. Detrick to recover the cabin. Five bodies were found inside.

By 1 p.m. on the day of the crash, volunteers had tagged the remains of 13 victims. As bodies were found, Zimmerman made sure they were covered. Forty years later, he is still proud: “We were able to give these people their dignity back.”

He likened the scene to a bad automobile accident, but much worse given the number of victims. It would take two days before all the bodies were found and transported to Washington, D.C., for autopsies.

Representatives from the Department of Defense arrived around 1:30 p.m. to take over the scene. The Cumberland News reported that Maryland State Police confiscated the film of photographers from The Frederick News-Post and The [Hagerstown] Herald-Mail. The police said they were acting on behalf of the Air Force.

Early news reports, refuted by the military, said the plane had been carrying classified documents when it went down. “Papers from the plane were strewn over the area, and state police worked to retrieve the documents, which were sodden from a light rain which fell throughout the day,” the Associated Press reported. Jewell said any papers he saw looked like confetti, as if they had gone through a shredder.

With the military managing the scene, the civilian units were sent home. But a couple of days after the crash, military investigators visited the Walkersville ambulance station and asked if anyone had picked up a green oxygen bottle. “They were trying to piece the plane back together on the site and were looking for that piece for an unspecified reason,” Zimmerman says.

Two weeks later, investigators invited the ambulance crew back to the crash site to see the recovered parts of the plane before they were sent to Andrews Air Force Base in Camp Springs. “I was shocked they could put back together as much as they had,” Zimmerman says. “And they were still looking for the green bottle. They seemed very concerned about it.”

Investigators were so concerned that they visited the ambulance station once more, again asking about the bottle—and again, nothing. The bottle was eventually found months later by a farmer plowing his field. 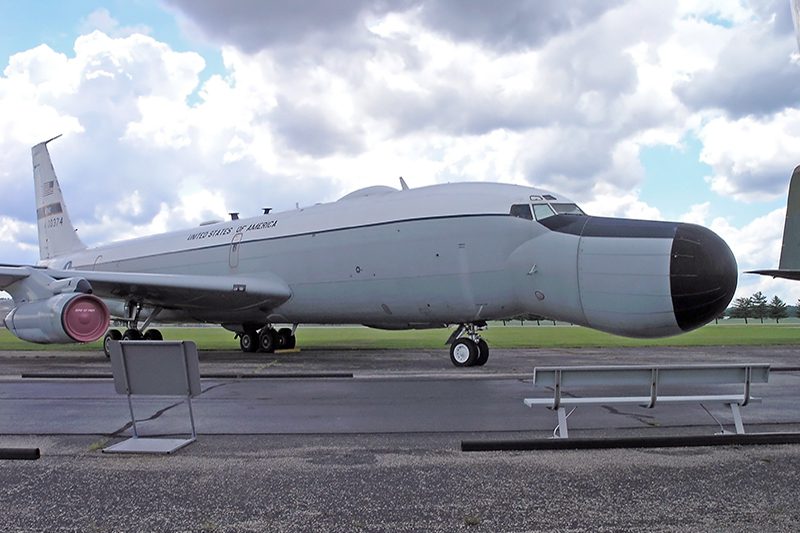 In June 1981, Air Force investigators said a malfunction of the flight control system while on autopilot caused the nosedive. Gen. Peter W. Odgers said, “We think that the autopilot possibly drove the trim system to a more nose-down position than would have been normal for that type of flight, and having recognized that, it was driven further for some unknown reason.”

The rapid nosedive created two other complications for the crew: Anyone not strapped into a seat would have experienced zero-gravity conditions and the primary source of electrical power failed. Amid those obstacles, the pilot, Maj. Joseph C. Emilio, had just 8 to 10 seconds to pull the plane’s nose up.

“The one thing we don’t understand, nor can we simulate, is the confusion [in the cabin] or what could have inhibited [Emilio] from taking more aggressive action to try to raise the nose. I think we can say the pilot made every attempt to recover the aircraft,” Odgers said at the time.

The explosion near the ground was caused by vapors from jet fuel that seeped from the bladder-like tanks in the belly of the aircraft, according to Odgers.

Although that remains the official explanation, Time Magazine and The Washington Post published stories in 1995 claiming that the two pilots’ wives had climbed into the pilot and co-pilot seats and one had taken control of the plane before the crash. This was based on classified reports and the fact that Peggy Emilio’s body had been found strapped into the co-pilot’s seat.

The Air Force had acknowledged Peggy Emilio was in the left co-pilot’s seat when the accident report was released, but the report also said she did not contribute to the accident. The official cause of the accident did not change, but shortly after the crash the Air Force canceled the program that allowed spouses on the plane to observe a mission.

Forty years later, Chip Jewell still thinks about that day and its aftermath, with an epilogue. While he credits the military and volunteers with a thorough search of the crash site, he doubts they found everything. “My guess is you could still find stuff out there,” he says.