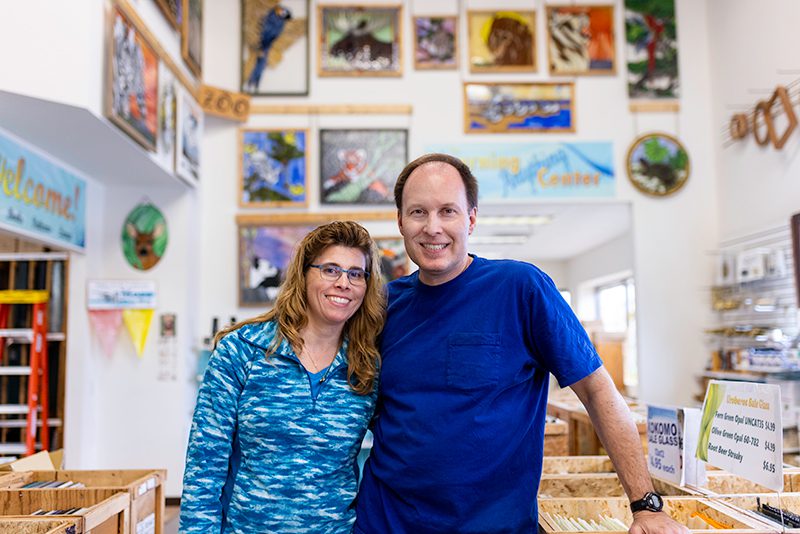 The mention of stained glass often conjures images of church windows, but for Paula and David Russin, it’s much more than that. The husband and wife are owners of Anything in Stained Glass, an art business that has been in Frederick since 2011 when they moved it here from New Jersey.

Paula’s parents originally owned the business, so she grew up in it. “From the time I was about five, glass has been part of my life,” she says.

The business started as a hobby for her mother, which turned into a family business selling glass to crafters in the New Jersey area. Paula’s parents ran the business there for 20 years before retiring. “They were involved in the business but it wasn’t their passion anymore,” she says.

She and David were already living in Maryland, where they both work in the tech field and David had been handling the website for her parents’ business. Both became disenchanted with their careers and believed they could grow the glass business when her parents retired. They believed that moving the business to this general area would be a productive and profitable move; much of the mail-order business was already coming from this area and there was a local market for the business. “Frederick is a surprisingly artistic community,” David says.

He was right. What started in a 6,000-square-foot warehouse space filled with glass soon grew to 9,000 square feet and then to its current 12,000 square feet of space, which also includes 400 square feet of studio space. Pre-pandemic, they estimated that 55 percent of their business was mail-order, with the rest being walk-in customers. 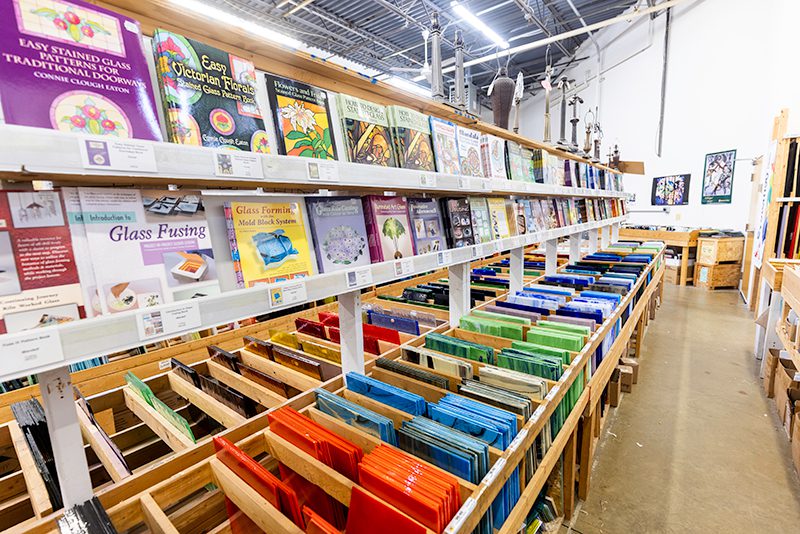 But this talented pair are much more than purveyors of glass. They both work in glass, though in very different modes: stained glass and fused glass, distinct ways of expressing creativity in and through the same medium.

Stained glass is the process of creating generally two-dimensional work, piecing together exacting shapes of glass by joining them with lead caming or copper foil and solder. Think of the stained-glass windows in churches. Paula works in stained glass.

David works in fused glass, which for those unfamiliar with the art form is the process of firing glass in a kiln to create glass with a shape, a more three-dimensional piece. Think vases, votive candle holders or sculptural pieces. (This is not to say that stained glass cannot be made into a three-dimensional object; it’s just that just one piece of fused glass can become three dimensional in the kiln.)

They are very different approaches to art glass, but both require the addition of abundant light to be seen at their best. 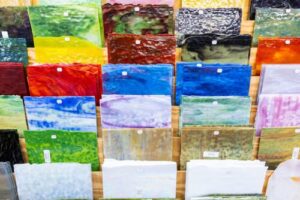 This husband-and-wife team have mutual respect for each other’s preferences and talents, they speak the same language to a point, but veer into different directions when it comes to working with the medium. Each craft requires a different set of skills and understanding of the nature of glass, and each requires careful attention to details and the constraints of the material.

For example, fused glass objects are limited to the size of the kiln; stained glass is limited by the material’s ability to support itself. Even the type of glass that can be used is different because not all glass can be fired in the kiln.

“She’s more exacting,” David says of Paula, whose work depends on geometry and exacting measurements. “I want things just so,” she adds in agreement. Her work is precise in terms of the size and shape of the pieces that need to fit together, and the visual texture of the glass—like ripples, waves and color striations—that produce the effects of tree bark, clouds or animal fur.

David is more willing to experiment and let the heat of the kiln reshape the form, and he’s happy experimenting with a new idea “just to see if it works.” His technical background comes into play when determining the kind of kiln, temperature and duration of the firing needed to produce a particular piece.

Their domestic and international mail-order business has been even busier and more demanding during the pandemic. Paula reasons that, “Although we’ve all been quarantined to a certain extent, folks haven’t stopped working with glass.” They currently stock over 22,000 kinds and sizes of glass, having recently added new lines from Mexico and the United States. “Stained glass has been produced in the U.S. since the 1800s, mainly in West Virginia, Indiana and Pennsylvania. Some of it is really rare and used for Tiffany reproductions,” Paula adds. 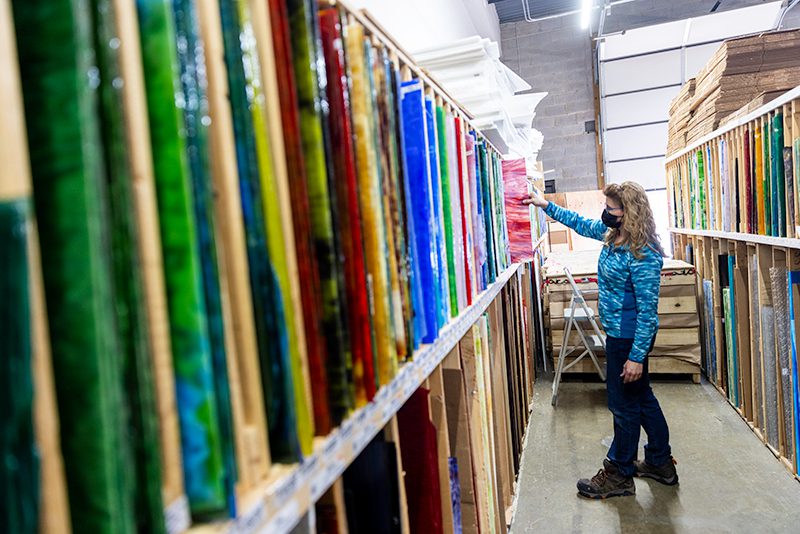 In addition to being artists in glass, as well as tech wizards in mediums that few realize demand such mastery, Paula and David are also teachers at heart. Included in their vast shop space is the studio space that, pre-pandemic, was available to glass artists for independent open studio time, and workshop space when they schedule lessons. “We want to help people create beautiful things,” Paula says. “The goal is for people to be proud [of what they make],” adds David.

“The store is my go-to place for glass, bonus points that it’s in my own backyard,” says Dan Patrell, a glass mosaic artist based in Frederick. “My glass and many of my tools has come from Anything in Stained Glass, and the people there have always been a joy to work with. Whenever I go there, I may have a specific idea about one pane of glass, but I always find myself leaving with a stack of glass because their choices are so abundant.” 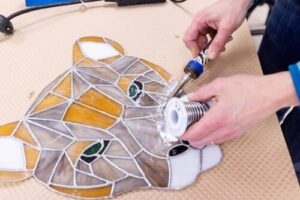 Several years ago, the Russins initiated a weekend festival for stained glass and fused glass. The word got out and over the years it grew into a three-day event with gallery sales by local glass craftspeople, demonstrations by well-known artists from across the country and vendors asking to participate. The last one in 2019 was huge. “We’d hoped to attract 500 people,” Paula says. “But we ended up with 19 vendors and 1,500 people over the three days,” David adds, finishing her thought as they often do with each other.

The hope is that when businesses are fully open again, they can return to their schedule of classes, demos and workshops. “And we really hope to have a festival this year, too. But that depends on a lot.” Paula says.