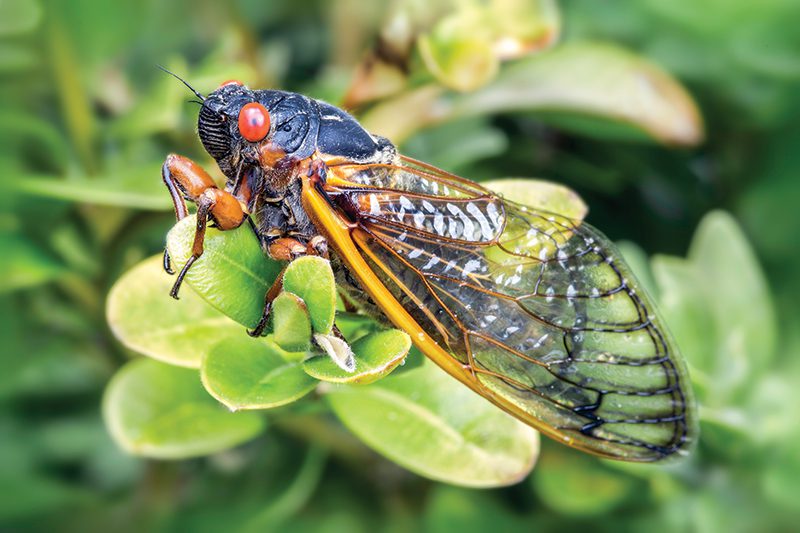 Millions of Raucous Cicadas Get Ready for Mating Season

Get ready. Beginning in late May millions of noisy, hungry, amorous cicadas will appear together after spending 17 years in their subterranean homes. We know this will happen because they are reliable, as noted in historical accounts that date as far back as the Plymouth Colony settlers in the 1630s.

When those early colonists came to North America to escape religious persecution, they saw the cicadas emerging from the ground and equated them to a plague of locusts, like those found in Bible stories. Since then, cicadas have been a bit misunderstood and maybe a little maligned.

Our periodical cicadas are very different from locusts and this is where high school biology classes will come in handy. Remember kingdom, phylum, class, order, family, genus and species? Well, cicadas and locusts are both in the same class (insecta), but their paths diverge from there. Cicadas are more closely related to aphids and locusts are a type of grasshopper—two completely different orders. Cicadas actually use a straw-like mouthpart to suck the juices from plants, while locusts chew their food.

Upon close inspection, they don’t even look that much alike. Cicadas have large eyes on the sides of their heads, their bodies are stout and they have huge wings. Locusts are long and slender with legs meant for springing off vegetation, and their wings are hidden.

Cicadas are actually much more complex than the ephemeral noisemakers we love to complain about, says Michael Raupp, University of Maryland professor of entomology and extension specialist. There are cicadas that come out every year—the “dog day” cicadas—and there are some that come out every 13 or 17 years. Across the world, there are about 3,000 species of cicadas and they live on every continent except Antarctica. But “periodical cicadas are found in North America and nowhere else in the world,” says Raupp. There are nearly 200 species and subspecies of cicadas on the continent.

The significance of this year’s cicada brood, known as Brood X, is that it is the largest in the country, covering 15 states, plus Washington, D.C. Millions of people will be able to enjoy a month of cicada love. “There’ll be birth, death and romance in the treetops. Murder and mayhem. It will be a National Geographic special in your own backyard,” Raupp says.

Most of us just remember their incessant singing, so loud it’s hard to concentrate on anything else, and the little exoskeletons clinging to the trees, but there will be so much more to enjoy while they are here.

Cicadas are often patchy in distribution. For instance, the City of Frederick didn’t have such a big emergence 17 years ago, so it is unlikely to have a big one this year, either. However, there are other parts of Frederick County that saw many cicadas, so those areas are likely to see them again. If you didn’t live in your current residence in 2004, ask your neighbors if your area can expect a brood boom.

Once the soil reaches about 64 degrees, the cicadas will start emerging. For this area, the bulk of the emergence is in late May and early June and the cicadas are active for about two weeks to a month. They all come out at once for a specific reason: Knowing that they are big, juicy food sources for birds, skunks, opossums and other critters, they need big numbers to make up for the ones that will get eaten. This ensures there will be plenty of survivors to mate and lay eggs, and for the babies to be there in 2038. It also means that many of the animals that eat cicadas will get a boost in population.

If you’ve been setting feeders and watching out the windows during the pandemic lockdown like millions of other folks, the cicadas might seem like healthy food sources for our feathered friends, but it’s not always the case. Some birds, like crows, blue jays, cardinals, house sparrows and red-headed woodpeckers, cyclically decline timed with the 17-year cicada emergence; other birds do the same with the 13-year cicada emergence. There isn’t a clear answer how and why certain bird populations’ declines are timed to exactly match the cicada emergence. Data shows that those bird populations bounce back the second year after the cicadas emerge and then drop back down two years later.

Cicadas can also affect the tree population. While most established, older trees will be fine, there may appear to be some damage at the branch tips. Smaller twigs die back, showing up as dead leaves only on the ends of the branches. Young trees, however, are at much greater risk of dying, particularly if they have only been planted within the last few years. The twigs on a young tree are exactly what female cicadas need to lay their eggs, about the width of a pinky finger. Because young trees only have small twigs and only a few of them, they can die if the cicada population is high enough. Raupp suggests netting young trees in May to prevent the damage. No chemical pesticide has been shown to protect trees and they can kill beneficial insects. Look for netting that has holes no more than a centimeter in size and remove the netting in June after the cicadas are gone.

One of the biggest complaints about the two-to-four weeks of cicada time is the noise. And yes, they do exceed legal decibel levels in many areas. “It’s like a big boy band up in the treetops,” says Raupp. “Only the males sing and it’s courtship behavior.” There are three different species emerging at the same time in the same space and they each have a unique song, so they can recognize their own species. “Once they are eyeball to eyeball, the male will use a different song to woo his mate. The female will signal with a little click of her wings and that seals the deal.”

They may be a periodical annoyance, but there will certainly be a show this year. If they aren’t in your area, just venture a few miles in any direction and you might find them. With the pandemic likely still limiting social gatherings when the cicadas emerge, this will be a great opportunity to get the kids outside for some science and history lessons, and to witness something we won’t see for nearly two more decades.