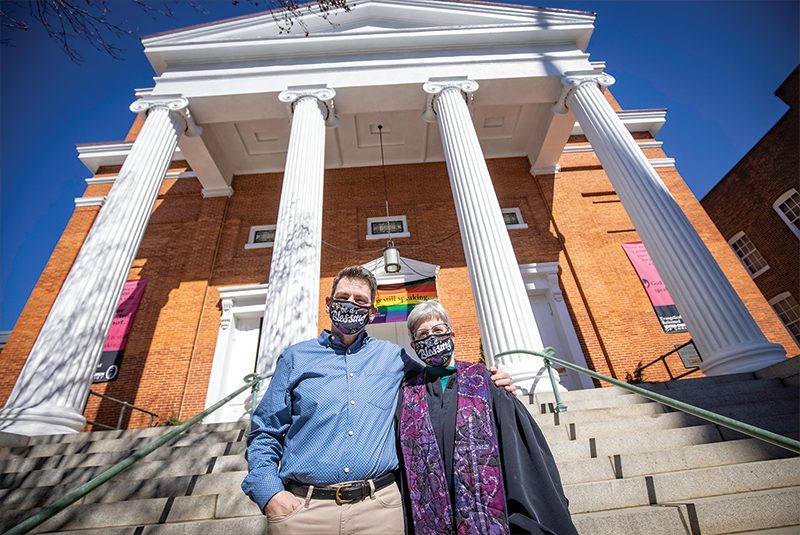 Once the pandemic began, the Sabbath wasn’t the same for Rosalind Nasher.

“I have no family close by,” says the 79-year-old Nasher, a member of Beth Sholom Congregation. “So, the people in the synagogue are actually my family. We have a core of people that go to every Saturday morning service and then we have lunch together. They are the people I spend holidays and celebrations with. They’re my go-to people.”

Covid-19 has changed all of that. And much more. During a time when houses of worship may be needed more than ever to offer comfort and support, they have been facing limitations and restrictions due to the pandemic. Some, like Beth Sholom, closed their doors to in-person worship and provided livestream services. Others permitted only a small group to attend in person, while requiring masks and social distance. Even now, as restrictions are being lifted and more people are returning to worship, the effects of the past year linger.

The faithful, in many ways, have remained steadfast—finding alternatives to connecting spiritually and with each other. Many houses of worship offer livestreaming services and use Zoom for bible study groups and other activities. Nasher’s much-enjoyed Knit and Nosh group, which was held at the synagogue, is now offered via Zoom. “It’s filling in a gap,” she says.

And then there are the more creative and tangible ways of reaching out and connecting with congregants such as worship packets, communion packets and even creating designated places of worship in the home. “Nobody in seminary trained me to do this,” says the Rev. Douglas Jones of Evangelical Lutheran Church. “It’s been a challenge.”

Randy Goldenberg, pastor of Frederick Christian Fellowship, understands the challenge all too well. He will be the first to tell you he is no technophile. But when the pandemic hit, and churches were shut down, he stepped up to the challenge. “I didn’t have a clue of what to do,” he says of creating an online presence in the early weeks of the shutdown. But, “I immediately started producing lots and lots of online material.”

Goldenberg created what he refers to as teaching moments to continue to connect with his congregation. “I was there doing this stuff in my living room with my wife using an iPad,” he says with a chuckle. But Goldenberg prevailed. While the church has since reopened, he continues to not only offer the teaching segments online but livestreams services. “We also ramped up our Zoom groups, which was a large [learning] curve,” he says. “We were like, ‘What is Zoom? OK, we better learn this.’”

Asbury United Methodist Church already had an online presence before the pandemic but still felt the challenge of online worshipping, says the Rev. Mark Groover. “Our traditions are that we are worshippers who like to greet each other,” says Groover. “We like to come together and worship and praise together. But due to the fact that this pandemic has limited that, we are now restricted to doing a new type of worship—a virtual worship.”

Despite the physical distance, Groover sees at least one advantage. “Virtual is good because we are able to reach a lot more people,” he says. “I have people watching from Florida, Harrisburg, Pittsburgh and New York. That is the best thing about virtual worship, is that the word of God is extended beyond the walls of the sanctuary.”

Jones, who also livestreams services, has noticed this, as well. He says he even has a viewer in Amsterdam. “Normally, we are 400 to 500 people in worship and our online presence is running more like 1,600 to 1,700 people a week viewing,” he says.

Shouts of “Amen!” have been converted to heart emojis, according to Groover. “When we were all together, I would say, ‘Let the church say amen,’” says Groover. “Now I ask people online to send some hearts. Those little emoji hearts. And you see a bunch of hearts going up across the screen. I can’t hear them say, ‘Amen,’ but I see those hearts going up.”

Looking ahead, many faith leaders believe that the way people worship has been forever changed.

“I think about 40 percent of people will be those that chose to be more sporadic,” says Goldenberg. “They will choose two or three Sundays a month and say, ‘I’m just going to watch online.’ It’s going to change churches all over the country.”

But not all have taken to the online way of doing things. For those like Ashley Federico, who attends Frederick Christian Fellowship, online is just not the same. “Watching a service in an apartment alone did not feel the same as being surrounded by others,” says Federico. “When in the church we are a community of people, and that was missed.”

And, that faith-based community is important to people like Donna Stefanick. Stefanick who moved from New Jersey to Frederick months ago, is looking for a new church. Pandemic restrictions have not made it easy, she says. “We haven’t found a church yet. It’s been really difficult to sort of scope out churches and find out what would be a good fit for our family and our beliefs.”

Even with an online presence, “you don’t get that personal interaction,” says Stefanick. “I am feeling a bit disconnected and like I am treading water with my spiritual life.”

She may not be alone. Jones says he is concerned about the lack of in-person interaction and its affect on his parishioners. “A lot of time we would notice something when someone was in a service,” he says. “If they’re normally gregarious and friendly and they are just kind of withdrawn, it’s a cue for us to contact them. Or say something to them. We don’t have those opportunities today.”

That in person one-on-one interaction is not confined to services. Outreach is a big part of most faiths, and it too has been hindered by COVID-19 restrictions. No home visits. No hospital visits.

That was troubling news for Mark Ulrich. When Ulrich learned last summer that he would need surgery that would require him to be hospitalized for days, he immediately reached out to his pastor, the Rev. Barbara Kershner Daniel of Evangelical Reformed United Church of Christ. “I asked her to pray with us,” he says.

While her prayer offered him comfort, Daniel could not be there to comfort him once he was in the hospital. “That was very difficult,” Ulrich says. “It took something that was already horrible and scary and made it more anxiety-filled. When you have faith, you draw so much comfort from that [connection].”

And even for those who now have the option of retuning to in-person services, it is not the same. Primarily, there are fewer people in attendance. Frederick Christian Fellowship, for example, would average 1,700 to 1,800 people every Sunday before the pandemic, Goldenberg says. “We’ve estimated that it’s probably only safe to get 300 to 350 max in there,” he says.

Those who want to attend services now may have to register online and be admitted on a first-come, first-served basis. Once inside, masks must be worn and social distancing is observed. And, for religious places such as the Islamic Society of Frederick’s mosque, the very act of how believers physically pray has changed.

“In our religion, when we pray, we have to be shoulder to shoulder,” says Syed Haque, chairman of the outreach committee for the Islamic Society of Frederick. “There should be no gap at all. Because of COVID-19, we separated and have a distance of six feet apart. Initially some people were confused. People objected. But we told them that this is how we are going to pray. They accepted it. They understood the pandemic was dangerous.”

Closed doors or fewer worshippers could also mean a lack of funds for houses of worship. But this has not necessarily been the case for those like Frederick Christian Fellowship. “What we have seen is a committed core of Christ followers in this church and they have stayed consistent,” says Goldenberg.

Others, like Evangelical Reformed United Church of Christ, which is open with restricted attendance, have benefited financially through its online presence. “We have received gifts from people who are not a member of the church but who are grateful for the livestreaming,” says Daniel.

Still, other houses of worship have had to pivot. When Beth Sholom Congregation closed its doors, it also shut down its very popular bingo games and a source of revenue. In response, it created new fundraising efforts, such as the Double Your Dues campaign. “We’ve seen an uptick in donations since we started that,” says Katelyn Vaughan, office manager for Beth Sholom.

With so many changes during a time of uncertainty, efforts to bring the practices of faith to members has taken on great significance. Evangelical Reformed United Church of Christ provides worship packets with a hard copy of the church bulletin. “Even though people could download it because it was online, they were able to hold something that was familiar in their hands for worship,” says Daniel. “That was huge.”

Similarly, Evangelical Lutheran Church offers communion packets. “You can sign up, and we will bring you communion,” says Jones.

Daniel has also encouraged her church members to create a special place in their homes for worship. “It makes it intentional,” she says. “You’re in the community virtually and the worship center helps you to focus and remember not only God but that there are other people worshiping, as well.”

Yet, despite all the efforts to connect and reach out to congregants, there are those moments when the call to comfort is almost unbearably hard to resist.

“I had a parishioner who lives alone say to me the other day, ‘I haven’t had anyone hug me in months,’” says Daniel. “I wanted to hug him.” Of course, she couldn’t.

Rabbi Jordan Hersh grew up hearing the stories of his grandfather who fought in World War II. And one story especially stood out to him.

“There was a Catholic chaplain who gave my grandfather a Jewish prayer book,” says Hersh. “My grandfather said for him that moment growing up in a world where he was always hated and attacked for being a Jew and to have that kindness and care from a Christian clergy person represented the very best of what America is all about.”

So, it is not surprising that Hersh, who is a rabbi at Beth Sholom Congregation, decided to become a chaplain himself with the Maryland Army National Guard. In fact, he is the only rabbi in the state military clergy ranks.

Hersh says he sees his role as “being a pastoral presence for my soldiers and helping them through difficult times in their lives, whether they be military-related or not.”

Hersh has had a front-row seat to recent historic events. He assisted in setting up field hospitals and testing sites in the early days of the pandemic. “There was a lot of fear, so the pastoral needs were very great,” he says. Later, he was deployed to the U.S. Capitol following the riot on Jan. 6.

He did all of this while striving to be there for his own congregation at Beth Sholom. He’s remained connected thanks to technology no matter his place or situation. “For example, I did a class over Zoom in a Humvee,” he says smiling.

Even as he was headed down to the Capitol following Jan. 6, he continued that connection. “I wrote a letter to my congregation explaining what was going on and why I was going down there and assuring them that they could reach out and contact me,” he says.

For him, personally, and as a member of the National Guard, Jan. 6 was an “emotional reaction of anger, sadness and shock,” he says. “What was being attacked was the essence of our democracy. Every one of us takes an oath to defend our constitution against all enemies, foreign and domestic. It wasn’t until Jan. 6 that I really understood the second part of that.”