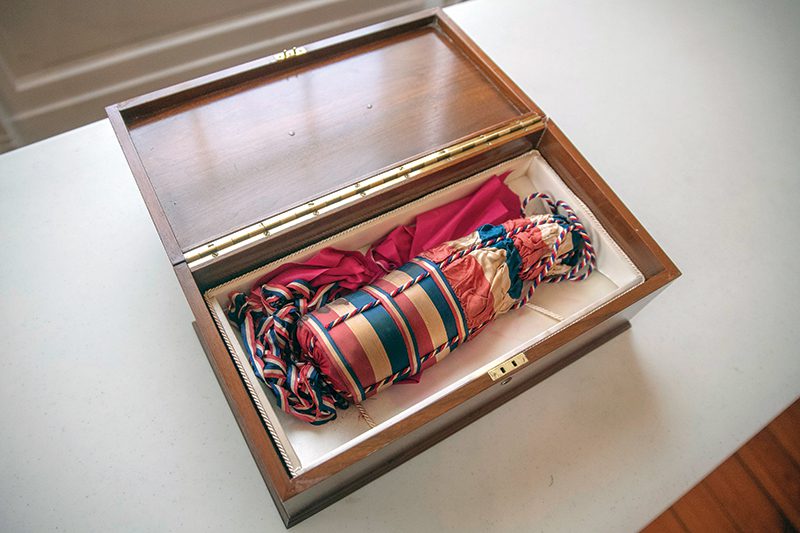 By Shuan Butcher, Board Member, Heritage Frederick | Posted on 03.14.21

This box might look like a typical wooden case for holding jewelry or maybe a humidor for fine cigars, but it is neither. This case held the christening bottle for the S.S. Frederick Victory.

Designing the Victory ship began in 1942 as a replacement for the Liberty ships, whose maximum speed was 11 knots (nautical miles) per hour and a potential target of enemy submarines. The new ship, officially designated VC2, had at least 6,000 horsepower and could travel at a swift 15-knot clip. These ships were 455 feet in length and 62 feet wide. Most of them were armed with a 5-inch stern gun, a 3-inch bow gun and eight 20-mm machine guns.

One of the interesting things about the S.S. Frederick Victory is that it was made in Maryland, among the many VC2s produced by Bethlehem Steel in Baltimore’s Fairfield neighborhood along the Patapsco River.

On Sept. 9, 1944, the ship was launched. The wife of then-Frederick Mayor Hugh V. Gittinger served as the S.S. Frederick Victory’s sponsor and christened the ship by shattering the ceremonial bottle of champagne against its bow. Traditionally, a ship’s sponsor is a female citizen who bestows luck and protection for all aboard. Of course, the war would end less than a year later and the ship would spend only 27 days in water before it was ultimately scrapped.

Heritage Frederick received this wooden case in 1989 by Hugh Gittinger, Jr. and Dr. William Nusz and is now part of the museum’s permanent collection.