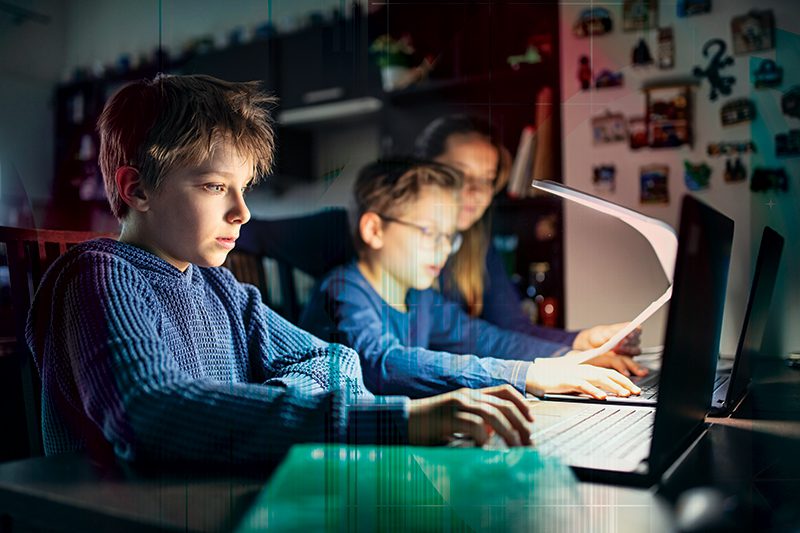 A Parent’s Journey in Visual Learning … and Beyond

In mid-January, I was set to interview a high-ranking member of Gov. Larry Hogan’s cabinet for a story I was working on. The interview time happened to be close to an important doctor’s appointment, so I had to drive to the medical office first and sit in the car.

No matter who I am interviewing, I do my research beforehand, so I don’t waste their time. Usually in the minutes before the call, I like to go over the information again, so it’s fresh in my mind. But on this day, I also needed to text my 10-year-old daughter to make sure she successfully beamed into art class.

Five minutes later, just before I get into my work call …

“Are you on? No problems getting in, right?”

I breathe a sigh of relief when I get a text saying she is in class. I switch back to reporter mode. My call with the cabinet member goes well, but as the minutes tick by, I don’t know if my son is watching the time. He has a class at 1 p.m.

My work call ends a few minutes before 1 p.m. Usually after an interview, I like to review my notes and highlight parts I want to include in my story. But on this day, I couldn’t do that. I had to instead text my son to make sure he remembered to get on to lab.

Since March 13, 2020, parents have had to balance work along with their children’s education, nearly all of it in the virtual format, with the hybrid virtual/in-class instruction structure now taking over.

I’ve read some online discussions where parents have said how utterly exhausted they are with the balance and someone will inevitably say “Well if you didn’t want to parent, you shouldn’t have had kids.” To that argument, I would counter that I don’t think any of us ever thought we’d be parenting during a global pandemic lasting for a year (and counting) that basically changed nearly every aspect of our lives.

All of us are exhausted. Students. Parents. Teachers. Administrators. Staff. Frederick County Board of Education members. Everyone. We have all been asked to do education in a way that has never been undertaken. Generations from now will learn about the unprecedented time we are living through. I want to get back to living in precedented times.

My kids have made good grades since moving to virtual, but they hate the format. They don’t like staring at the screen for so long. My daughter says she gets distracted by being at home and we have no space for some of those cute kid classrooms that others have put together in their homes. My son doesn’t like having to sit for classes that go for over an hour.

These observations should not be taken as a mark against teachers though. The large majority of my kids’ teachers have been fantastic. Whenever we have asked for help, they have gone above and beyond by offering private sessions and even cell phone numbers. Indeed, many are working twice the hours they’re being paid for as they have to completely reinvent the ways in which to reach students both academically and socially.

Yet, I sense there has been a turn recently. I hate how teachers have been vilified during this pandemic. Some critics don’t believe they are “really” teaching since it is an online format. Others have been angered by some teachers voicing their objections to going back to in-person before they have been vaccinated. No matter your opinion on those arguments, it breaks my heart to see amazing educators attacked when they are trying so hard.

This schedule was pretty manageable for him. He had his classes and then could get back into Google Meet to talk to a teacher if he had a question.

When the hybrid format was announced, the middle school schedule changed. My son now has lunch at 9:54 a.m. That is not a misprint. Instead of eating, he has been using the half hour as a break because he isn’t hungry so close to breakfast. Conversely, he is famished by the time he gets out of school at 1 p.m.

The elementary schedule, on the other hand, has always been a struggle, with on/off classes buffered by gaps of free time.

On a typical virtual Wednesday, my daughter started at 9 a.m. for group reading and logged off at 9:20 a.m. Then she had to log back in at 9:40 a.m. for her small reading group gathering and logged off around 10 a.m. She usually completed her reading assignments and had lunch during this time.

The schedule is a very hard juggle because in elementary school, the lineup is different every day. Two days out of the week she has science. Art is a couple of days a week, but the other specials classes (physical education and music) are at 1 p.m.

I was so upset about the schedule that in September I emailed the Board of Education and Superintendent Terry Alban. She emailed back saying studies found elementary-aged children need those screen breaks. I do understand younger kids need those pauses, but fifth graders should not be following the same schedule as kindergarteners.

I know some parents like to use Alexa to set reminders for class. We don’t have one and I just don’t like having alarms going off multiple times a day because I don’t want work calls interrupted with the noise. (We have a small house, and you can hear everything.) My kids and I just try to remember and be constantly aware of the time.

Sometimes I’ve failed at this. I have gotten deeply into work projects and just completely lost track of time; then I write teachers to apologize and ask what my child has missed.

I have worked from home since 2010. It’s a privilege that I try never to take for granted. But to be perfectly honest, it has been difficult balancing work and my kids’ education. I’m sure many other parents are feeling this way.

On one day, my daughter’s music teacher wanted her to make a maraca out of household items and send in a video. So, instead of doing work, I had to stop what I was doing to find some rice and a clean container. Instant maraca. Another time, her art teacher gave her a weaving drawing assignment, but she was having trouble drawing the lines. So, I cut out some strips of paper to physically show her where to place her lines.

There have been several times where my kids didn’t understand a lesson and didn’t ask the teacher for help. They looked to me expectantly and I responded the same every time: “I was not in the Google Meet. I have no idea what you are supposed to do. You need to ask the teacher.” Sometimes I can’t check their work until later and school office hours are over, so it’s me just giving my best guess on what they need to do.

I’m grateful my kids feel comfortable enough to tell me when they don’t understand something. But it’s hard not being able to help them sometimes because I can’t watch their meets. If they were in school, a teacher could see them if they are struggling. They couldn’t in the virtual format and that’s been frustrating. I have even tried to teach myself Common Core math in order to help them, but I was not taught that way, so it’s hard for me to help them.

Even as I typed this, I was interrupted seven times. My son’s health meet link was not working. The cat was eating something she shouldn’t have been. My daughter needed to get on to writing. Another interruption is around the corner.

I honestly hate complaining because I know others have it worse. There are people who cannot work from home. They are having to check their kids’ work after they get home from work, when they are exhausted and just want to flop on the couch. How are they balancing it all? I really don’t know but, my goodness, I admire them and empathize with their struggle.

Not seeing friends has probably been the hardest part of the pandemic for my children. We don’t live in a neighborhood with kids their own age. We have one family that we have “bubbled” with that have similar pandemic beliefs, so the kids are getting some limited friend interaction.

Several of the activities they normally participate in like basketball have been canceled and it’s heartbreaking. Facebook memories have been particularly hard to look at this winter.

We had to pull my daughter from school band because the meets were way too chaotic. It was not the instructor’s fault at all. With different internet connections, it was impossible for the kids to be in synch when playing, which lead to a lot of frustration. My daughter won a scholarship last year, so we were able to put her into private band lessons which have been great. But what about the kids that can’t do that? I worry about them a lot. How many kids gave up instruments this year because the online format was too confusing and will never pick them back up?

Bringing my kids’ socialization into what they would normally get at school, I have been signing them up for new activities in which they might not normally participate. My daughter joined Girls on the Run in the fall and will take part in it again in the spring. My son is doing an American Ninja Warrior class at a local gym and going to a middle school weightlifting program twice a week.

We’re going to activities five days a week and I know some may be upset by this. They think we should be staying at home all the time, but my kids need socialization in person. Talking through a computer does not cut it for them. Every precaution is being taken at the locations with mandatory masks, hand sanitizer, social distancing and a massive amount of cleaning.

I often think about the kids that have been unable to do activities for a variety of reasons. How are they holding up by only being at home? Are they OK? I hope so. What can be done to help them?

My son was able to tour his middle school in early February—a school he had been attending virtually since September. He went with a group of friends, some of whom he had not seen in months. Afterward, he was bubbling with excitement and talking about things that happened on the tour. I had not heard him that excited about school in a year. It was so refreshing to hear. I hope to never take in-person school for granted ever again.

I’ve posted multiple rants on my personal Facebook page about how much of a struggle online learning has been. A good number agreed with me. I had one friend comment that her son is really flourishing in the virtual environment. I saw her out in the community shortly afterward. She said she thought I probably hated her for posting that. I told her, of course, I did not.

I think it is great that some students have thrived virtually. I hope Frederick County Public Schools will explore keeping that option for children who might prefer that environment. But I also believe a majority of students have not done well and that is a huge issue educators and students will have to work on for many years to come. I’m just glad they’re finally back to school.