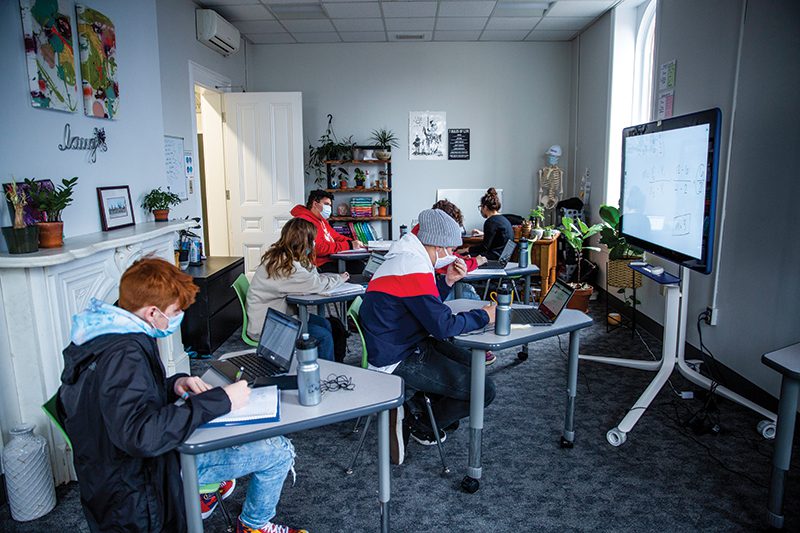 Phoenix Recovery Academy, Frederick’s newest private school, has many of the trappings of a traditional high school—classrooms, teachers, students—with one significant difference: Its primary mission is to help students recover from addiction.

That’s why Damian is here. A junior from Middletown, Damian started attending Phoenix Recovery in December after years of abusing drugs and alcohol. “He was addicted to not being sober,” his father, Tommy, explains. “He was chasing not being sober.” Drugs took Damien to a place where he didn’t have to feel anything. “He would get so high he could be numb.”

Phoenix Recovery Academy opened last summer with one student. Five students now attend, four boys and a girl, and Rich Fairley, the school’s executive director, hopes to enroll five to seven more by the end of the school year. Housed in a bright, refurbished three-story brick building at the corner of East Church and Carroll streets, the 12,000-square-foot space was once home to the Frederick County Board of Education.

There’s a science room, an English room and a social studies room. There’s an all-purpose room that doubles as a math classroom and lunchroom. While there’s no cafeteria, there’s a refrigerator and microwave. There’s also a small library. Teens sometimes do yoga in the all-purpose room. The upstairs is being renovated into offices and meeting rooms.

The teaching staff are seasoned educators. Fairley, who also teaches social studies, has 30 years of experience in education, much of it with what is now Saint John’s Catholic Prep. He also taught for many years at St. Maria Goretti Catholic High School in Hagerstown.

More importantly, however, all of the teachers and staff members are recovering addicts. Sara Varga, head of school, has a background in education, social work and wilderness therapy. Before graduate school, she was an addict who realized she needed to get clean if she wanted to be successful in her career.

Fairley was able to hide his addiction for many years, and he has spent the past 19 years in a recovery he described as on and off for much of that time. In 2018, he met Phoenix’s founder and president, John Edmonds. “He’s a graduate of the first recovery school in the country,” Fairley says. That Montgomery County school, known as Phoenix School, closed in the early ’90s. Edmonds and Fairley together began building the concept of Phoenix Recovery Academy.

The pair built the school from scratch. They formed a nonprofit, selected a board of directors, raised funds, secured community involvement and found a home. The Ausherman Family Foundation, owner of the former Board of Education building, offered the school a five-year lease for $100 a month.

“Word of mouth spread through the community to get us staffed,” Fairley says. There are 50 recovery schools across the country and Fairley and Edmonds connected with five of them for help and advice.

Starting in the middle of a pandemic added to the school’s challenges, but with safety and health procedures in place, the school opened for in-person education on Aug. 31. “We do a rolling admissions,” Varga says. Classes operate on a traditional school calendar, but students check in with staff during breaks to keep the continuity of learning.

The serene setting conveys calm. The science room has a technologically advanced Jamboard that is surrounded by lush, green plants. Large windows let in daylight and give the room an airy, peaceful feel.

Students study math, science, English and social studies, but there’s no getting away from why they’re there. “At the morning meeting, a student might say, ‘I had a rough night,’” Fairley says. Outside of school, each student is in a recovery program, like Alcoholics Anonymous or Narcotics Anonymous. They have sponsors they can call when times get rough. But school staff are available, too.

“We’re not a treatment center,” Varga says. Each student has a professional treatment plan involving a therapist or psychiatrist. They attend recovery meetings. Most recovering addicts, however, do well with structure, and the school offers them that.

If students need to talk about their addiction in class, they do. “Talk of recovery is infused throughout the day here,” Fairley says. The library has books like The Hate U Give that give students a realistic look at drugs and racism, along with books about recovery.

“There’s a lot of support on the back end in Frederick for recovering addicts,” says Sean Nicholson, a Frederick native and the school’s director of development who first got addicted to drugs at age 15. But teens can benefit from being around others like themselves, he adds. After 15 years as an addict, he is now sober. Nicholson, like the rest of the staff, hopes to combat addiction early in the lives of others.

“Bad decisions lead to consequences,” Nicholson says. The school’s philosophy is to give students the kind of foundation that will help them make better choices.

“It takes a lot of energy to be an addict and have a use disorder,” Fairley says. “If you can change that energy and passion into something more productive, it’s amazing what you can do.”

In traditional settings, recovering students have the challenge of being around students who may have access to drugs and alcohol. That’s being made even easier with recent moves toward legalizing marijuana. “In recent times, parents have thought, ‘As long as my kid’s only smoking pot, I’m OK with it,’” Nicholson says. “But we do drugs and alcohol to change the way we feel.” For teen addicts, that can put them in a no-win situation.

Early in 2020, Damien left Florida and moved in with his father in Middletown. Damien started using pot in middle school in Florida after his parents divorced. Tommy and his former wife did all they could to make sure Damien had a normal life, but Damien’s desire for drugs and alcohol became insatiable. He found ways to grow his habit by stealing.

“His desire for heavy drugs runs pretty deep,” Tommy says. It’s surprisingly easy for young people to get drugs, Tommy adds. On dark corners of the web are Instagram pages where kids as young as 10 can get drugs, he says.

But drugs cost money, and Damien got arrested more than once for stealing. When he came to Middletown, he brought his rap sheet with him, and he checks in regularly with his parole officer. In his new home, Damien continued to use drugs, once consuming four bottles of cough syrup when he couldn’t get anything else.

In desperation, Tommy asked the parole officer for resources, and was referred to Phoenix Recovery Academy. “I saw a difference within two weeks,” Tommy says. “It was like the core of our family started to click. He engages us in conversation. He has refocused his entire commitment to graduating on time. He’ll be there until he graduates from high school.” Damien is now taking college prep classes, something that was out of the question before he went to the school.

One of the ways Tommy has helped Damien prevent his habit from recurring is by taking away his son’s phone. Instead of using his phone to seek drugs, Damien is able to talk with fellow students and staff if he’s having a bad day.

“He’s in a phase where he has regrets and guilt,” Tommy says. “He’s trying to deal psychologically with a couple of things at once, but they give these kids tools. They also give these kids a sense of ownership.” The empathy Damien once had for people has returned, his father says.

The school is part of a continuum of recovery for these teens, Fairley says. It’s not cheap. Tuition is $13,800 per year, or $1,150 per month, although there is tuition assistance for families who need the support.

It’s also a year-round effort. While there are no classes in the summer, there are programs that continue over school breaks. There are after-school meetings on Tuesdays and others on Saturday evenings.

“Every student who comes in here creates their own recovery plan,” Fairley says. The school’s job is to give the students the tools to stick with that plan. “No two addicts are alike,” he added. “No two recoveries are alike.”

For more information, go to www.phoenixfoundationmd.org.