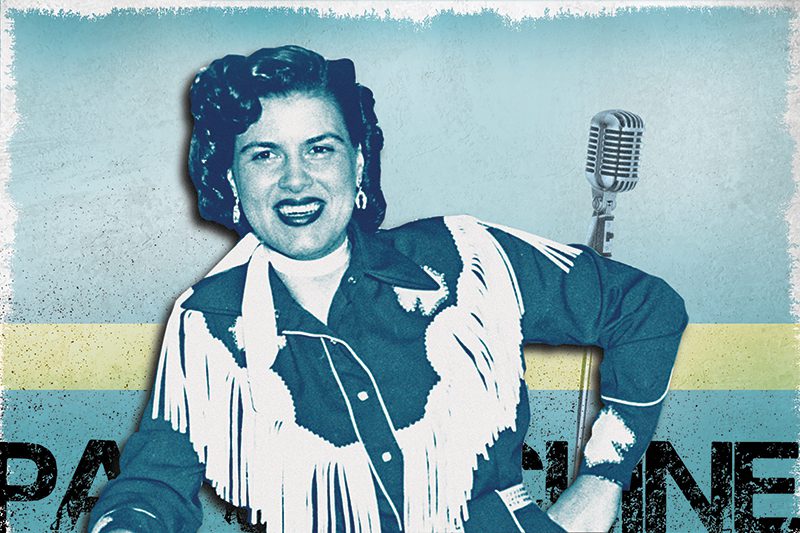 In September of 1952, a high school dropout who began singing professionally to support her family back home in Virginia first took the stage at the Brunswick Moose Lodge.

Ginny Hensley’s big dreams had already earned her an audition with the Grand Ole Opry at age 15. Nothing came out of the tryout, but that didn’t deter her ambition to be a professional singer. So, here she was, five years later, entertaining an audience in the rustic railroad town on the Potomac River.

She was a long way from Nashville.

Within a month she would meet Frederick resident Gerald Cline and five months after that they would marry. She began using Cline’s surname for the stage and ditched Ginny for a variation of her middle name, Patterson.

Yes, it’s true that Virginia Hensley was originally from Winchester, Va., but it wasn’t until she started performing in Brunswick that she became Patsy Cline. During the next decade she would earn national acclaim for a string of country music hits a week because of her crossover appeal on the pop charts. Despite a relatively short career that ended in tragedy, she built a legacy as one of the most influential vocalists of the 20th century.

Although she was born in Winchester, Ginny’s family relocated to many cities throughout the state as her blacksmith father, Samuel Hensley, sought work. Eventually, the family settled back in Winchester, which Ginny considered her hometown.

A talented singer even as a young child, young Ginny seemingly suffered a setback when she contracted rheumatic fever and a throat infection at 13 years old. But she credited the illness with changing her singing voice and giving her a signature resonant tone. “I developed a terrible throat infection and my heart even stopped beating,” she said in a 1957 interview. “The doctor put me in an oxygen tent. You might say, it was my return to the living after several days that launched me as a singer. The fever affected my throat, and when I recovered, I had this booming voice like Kate Smith’s.”

Ginny’s father left the family in 1947, which was probably for the best. Years later, it was revealed that Samuel Hensley had sexually abused his daughter. However, with her father gone as a source of financial support, Ginny had to leave John Handley High School in Winchester to earn money for the family.

When the audition for the Grand Ole Opry went nowhere, she returned to Winchester to perform in the region.

Hensley first started singing in Brunswick on Sept. 27, 1952. “She had a contract to play the local Moose club with a performer named Bill Peer and his band,” says Jim Castle of the Brunswick Heritage Museum. For the next three years, she would be a regular performer on Saturday nights with Bill Peer and the Melody Boys. She would also appear in many other clubs, carnivals and similar venues in Frederick County throughout the 1950s.

She was a popular performer, always trying to please the audience. Douglas Gomery wrote in Patsy Cline: The Making of an Icon that one Brunswick fan recalled, “We’d shout out a request and she’d say, ‘I never heard that one yet, but I’ll learn it!’”

According to a timeline compiled by G.E. Hewitt and Ron McBride, Hensley met Gerald Cline at the Brunswick lodge on Oct. 11, 1952. Although Gerald lived in Frederick, he had come to Brunswick for the performance. He was immediately taken with Hensley. During the band’s first break, he asked her if she would join him for a drink. Not surprisingly, Peer hovered close by. Gerald charmed the singer, and the two soon became an item.

In Honky Tonk Angel, An Intimate Story of Patsy Cline, Gerald’s brother, Nevin, told biographer Ellis Nassour that despite the Cline family owning a contracting and excavating company in Frederick, Gerald was only “Saturday night rich,” meaning he had money after payday but spent it quickly on women and having fun. Nevin Cline also had a poor view of his brother’s work ethic.

“He never lifted a finger to help us,” he told Nassour. “Gerald was supposed to drive one of the trucks, but he’d only do it if he was forced. Dad finally gave up on him and, in the end, made him secretary of the company, but I don’t know what he ever did even in that position. He was good at one thing, being a ladies’ man.”

At five feet, eight inches tall and 220 pounds, Gerald Cline was not considered handsome, but he had a reputation of being a charmer who was fun to be with. As a result, he had no trouble finding companionship. In fact, he had been married previously and had a son. He was also eight years older than the 20-year-old Ginny. “It might not have been love at first sight when Patsy saw me, but it was for me,” he said in Honky Tonk Angel.

Gerald doted on Hensley while they dated, buying both her and her mother gifts. He would even drive to Winchester to pick her up and and drive her to work. Although she was still seeing Peer, Cline and Hensley married in a small, private ceremony on March 7, 1953, in the Evangelical Reformed United Church of Christ in Frederick.

The couple first lived in a home Cline’s father, Earl Cline, owned in the Linden Hills area, near the intersection of West Patrick Street and U.S. 15. At about this time, Peer encouraged Hensley to adopt a catchier stage name. And with that, Patsy Cline was born.

Although the Clines’ marriage created the name of one of the all-time greatest country singers, it seemed doomed from the start. “All the Hensleys agreed that Gerald was a nice man who dearly loved Ginny, but she was less smitten because of his continual demands that she give up singing,” Gomery wrote.

She was also still carrying on her affair with Peer. Once Gerald came home unexpectedly when Peer was with Patsy. According to Nassour, Peer hid under the bed until Gerald fell asleep, so he could sneak out.

Gerald still doted on his wife at the beginning of the marriage, even buying her a new Buick Roadmaster in her favorite colors, red and white, according to Gomery.

The Clines moved from Linden Hills to the second floor of 824 E. Patrick St., across the street from the Frederick Fairgrounds, where a plaque now marks the location. Later, they moved in with Cline’s parents at 436 E. Patrick St. to save money, and before they divorced, they lived in a trailer park west of Frederick.

Since Gerald was not too committed to the family business, he often traveled with Patsy as she performed in different venues. This soon grew old for Gerald, or perhaps he wanted to separate his wife from Peer. “Gerald wanted Patsy home with his supper and slippers, waiting when he got there,” Nassour wrote. “That wasn’t Patsy. Their arguments were legend with the downstairs neighbors.”

Gomery credits Gerald with helping his wife get her first record contract, which she signed on Sept. 30, 1954. That August, Gerald had driven Patsy to compete in the Fourth Annual National Championship County Music Contest in Warrenton, Va. She sang Faded Love and won $100 as the best female vocalist. This got her a job offer from Connie B. Gay, the event sponsor, at his radio station, WMAL-AM in Arlington, Va.

“At first she sang advertising jingles,” Gomery wrote. “What Connie B. Gay’s connection did offer was a record contract with William McCall, owner of the 4 Star label, of Pasadena, California.”

Other sources give Peer an even larger role in helping Cline land the deal because he created a demo tape of her singing and sent it to different record labels. He also signed as the witness on Cline’s 4 Star Records contract.

The fighting and infidelity got to be too much, and Patsy and Gerald split for good in March 1956. Their divorce was finalized a year later. Gerald blamed Patsy’s mother and Peer for the breakup of the marriage.

Less than a month after the Clines’ divorce was final, Patsy met Charlie Dick, the man who would become her second husband.

Patsy Cline’s big break came when she appeared on Arthur Godfrey’s Talent Scouts program on Jan. 21, 1957. She sang Walkin’ After Midnight and won the competition that evening. Although Cline had already recorded the song, it hadn’t been released as a single. Decca Records rushed it into release, and it peaked at No. 2 on Billboard magazine’s Hot Country chart, and it also reached No. 12 on the Billboard’s Pop chart.

In 1958, Patsy, Roy Clark and Jimmy Dean sang at the Brunswick Fire Hall for a special fundraising performance. The show raised money for 5-year-old Vicki Stair, who suffered burns over 45 percent of her body from an accident. Then-Brunswick Fire Chief Sonny Cannon organized the benefit concert, which was a hit, drawing people from all over the area.

“She had a great voice. She came out to sing during Jimmy Dean’s break. No one knew beforehand that she was going to sing,” recalls Brunswick resident Mary Jo Brown, who was in the audience.

Brown says she and her friends were excited about being able to see Cline perform, especially since they weren’t able to attend her earlier shows in town. “We couldn’t see her at the Moose Lodge because they served alcohol,” she says.

The performance stuck in Brown’s mind so much that she helped organize a 50th anniversary re-creation of the concert in 2008. “More than 350 paid $45 in advance or $50 at the door. This was a fundraiser for three nonprofits. The program included live music with a set of Patsy covers,” wrote former Brunswick Mayor Carroll Jones in an e-mail.

Carroll had known Ginny Hensley during childhood. “I met Patsy in the fall of 1947 (she was 15, I was 13) when we rode the same school bus in Loudoun County, Virginia,” he wrote.

Carroll said many residents took a certain pride in Brunswick’s role in Cline’s career. “Expressed in another way, many viewed her as a ‘hometown girl,’” he wrote.

By 1960, the Grand Ole Opry corrected its earlier mistake of rejecting Ginny Henlsey and admitted Patsy Cline as a member. She soon became a big hit maker with songs like I Fall to Pieces, She’s Got You and Crazy.

On March 5, 1963, Cline was flying home to Nashville from a benefit show in Kansas City, Mo., with her manager, Randy Hughes, and fellow performers Cowboy Copas and Hawkshaw Hawkins. The plane hit rough weather and crashed near Camden, Tennessee, killing everyone on board.

“When she was killed in that plane crash,” Brown says, “the people of Brunswick lost a friend.”