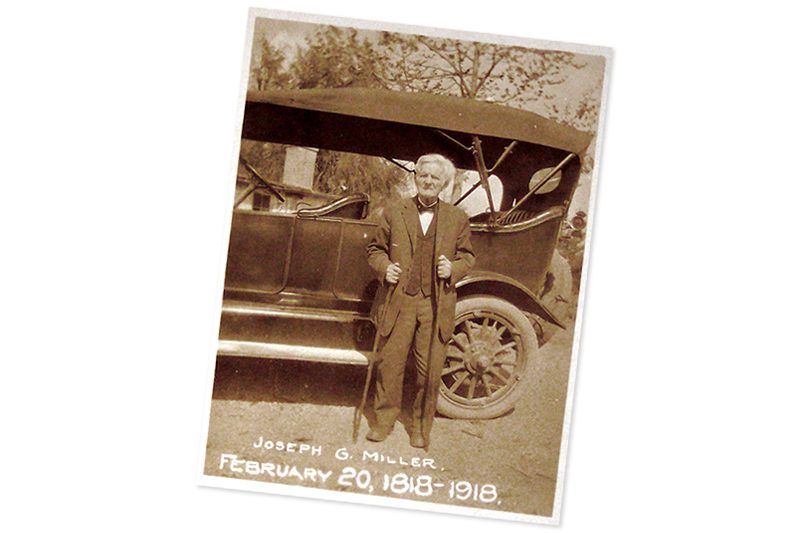 The 20th of this month marks the 203rd birthday of Joseph G. Miller, Frederick County’s “Grand Old Man.” Born in 1818 to David and Maria Getzendanner Miller, Joseph Getzendanner Miller was the third of seven kids. He moved to Frederick when he was 16 to work in Steiner’s General Store.

By 1861 he was a strong pro-Union Republican who was elected that year to the Frederick Board of County Commissioners. His first assignment was managing the funds to rebuild the County Courthouse, which had been burned that summer by unknown cause.

In September 1862, Confederate troops led by Gen. Stonewall Jackson entered Frederick County, threatening the city and its treasury, especially the large sum amassed to pay for the courthouse. Being the only unmarried commissioner and having no family to protect, Miller was ordered to take the building fund to Jacob Conklin, who lived on a remote Pennsylvania farm, to hide the money until the Confederates left town. Joseph concealed the money under his saddle and started north, travelling at night on back roads to avoid detection. In 1863, another Confederate threat sent Miller to Baltimore with the county’s records and papers. In 1864, the Confederates again returned and Miller fled with county records and funds. On Jan. 19, 1865, Joseph married Sarah Catherine Conklin, the daughter of Jacob Conklin, whom he had first met while hiding in 1862. In 1915, when this photo was taken, Joseph was 98 years old and “drove to town in the heat of the day and marked a Republican ballot in Precinct 3 polling place, next to the South Market Street Bridge.” Joseph died March 11, 1919, at age 101. Sarah died two months later, on May 15, at age 88. They are buried together in Mount Olivet Cemetery.