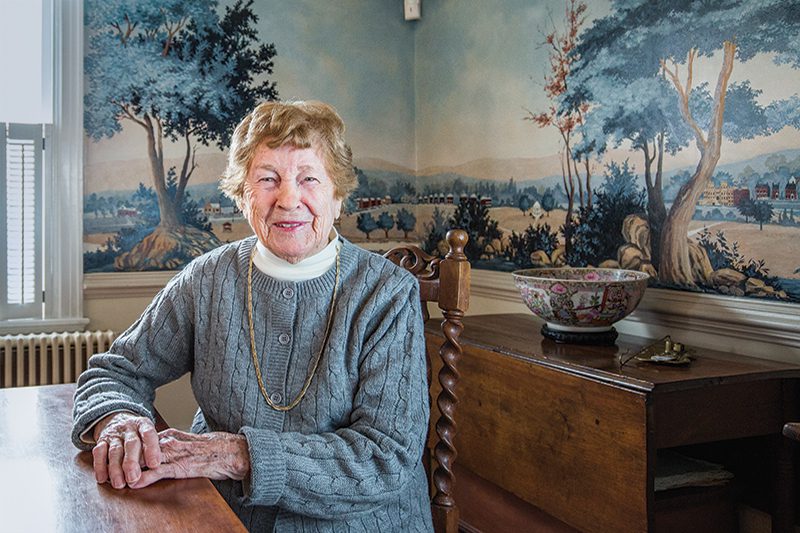 She picked up threads of history and used a brush to weave them into her life’s work—a tapestry of her own design. Along the way she made friends, inspiring many, and by example taught countless others to be and give their best.

Unlike the varied installations she created for others, the picture Virginia McLaughlin painted of herself remained constant: she maintained professionalism while becoming friends with clients, optimism was her hallmark, and her energy could leave observers exhausted. Even into her tenth decade she clambered up scaffolding to reach the heights of a project.

In the Ross House on Courthouse Square, McLaughlin captured one of Frederick’s most famous historical events—the visit by the Marquis de Lafayette to the city in 1824—painted on all four dining room walls.

“I met her shortly after I bought the house,” says current owner Theresa T. Michel. As they talked about the mural, “I realized she researched the story of Lafayette deeply and thoroughly. She wanted to get the details right.”

McLaughlin passed away in December at age 98. “It’s hard to imagine Frederick without her,” Michel says. “It seems like she was always here. I will miss her and am grateful to be a steward of her work.”

Mary Mannix, manager of Maryland Room at the C. Burr Artz Public Library, attests to McLaughlin’s research ethic. “Virginia was a really good researcher who came here not just to find information, but to gather it.” The library is now custodian of McLaughlin’s notebooks, which contain details of the research she unearthed for murals.

“We were always happy to see her when she came in,” Mannix recalls. “She was so gracious and thankful for our help. She was genuinely a kind person, and she’d talk with us, not just about whatever she was researching at the time.”

A ceiling in Emily Benedict’s former home in Chambersburg, Pa., is undoubtedly McLaughlin’s most whimsical project, and it was her 101st mural. It started out with deep-blue paint on the dining room ceiling. “She approached the project with a joy of life and an effervescence that was obvious. It could be felt. And she also did a good job of inserting her opinion, even if it was not asked for,” Benedict says.

But, at some point, McLaughlin felt the painting was too somber. “So, we added the monkeys!” Benedict says. The monkeys now peer over the edge of the tray ceiling looking down on diners at the table.

McLaughlin painted a unique installation in the parlor of Matt Thrasher’s Frederick home—a monochromatic mural depicting some of Frederick’s iconic landmarks rendered in shades of blue. “The walls were already a light blue, so it fit with the decor of the house,” Thrasher explains. “She had never done a monochrome and we were just looking for something different. Virginia was very excited about the concept. She thought it may be challenging but was more than on board to give it a go.”

She used scaffolding and ladders in the 12-foot-high space. “I work nearby and asked Virginia to call me for help moving things around. Typical of Virginia’s independence, she told me, ‘Matt, if I can’t move around on my own, then I shouldn’t be doing this any longer!’”

The Thrashers’ 3-year-old son and Siamese cat would watch and ‘help’ during the project. “Virginia was very tickled to watch those two,” and she included both in the mural.

“She was a great artist, definitely independent with a true, humble heart and sincere purpose and attitude. I can only hope that her work can be seen by many more generations living in the house,” Thrasher says.

Marjory and Dana French were McLaughlin’s neighbors on Baker Park. “Virginia was a role model on how to age well,” Marjory says. The time the artist painted a mural in the couple’s home “was the best,” she adds. “I never wanted those days to end.”

Marlene Young knew McLaughlin through organizations such as the Historical Society/Heritage Frederick, the Women’s Giving Circle of Frederick County and events at the Delaplaine Arts Center. “Every time we met, she greeted me with that endearing smile and the ever-present twinkle in her eye. For me, they were hallmarks of her brilliance … of the person, the painter, and her paintings,” she says.

The Delaplaine Foundation, where Young is president, awarded McLaughlin a $25,000 grant for the publication of Itinerant Painter, a book about her life and works.

“Her unassuming humility, her lively, spirited vivaciousness, and her profound faith were part of her character. She firmly believed that her talent was a gift she’d been given by the creator and consequently, she felt she had to paint,” Young adds.

The most famous and easily recognizable murals McLaughlin painted are at the Mount Vernon (Va.) Inn, but a mammoth space in Downtown Frederick was among the most challenging. The 20-foot-high walls of former Masonic temple on West Church Street were the ‘canvas’ for the murals of The Temple: A Paul Mitchell Partner School when it was opened by the Riser family.

“It was Virginia’s creativity that inspired the Greek goddess motif from the Erechtheion on the Acropolis in Athens on the walls. She was the one who tied the fact that this had been a temple and was now a ‘temple’ to beauty, to the images of those classic carvings,” Christian Riser says.

Among her murals in other local public spaces are those in Hagan’s Tavern on Old National Pike, and they were among her first. Jeff Reinhard, former owner, says it was a conversation with McLaughlin’s son Salyer that prompted a discussion about McLaughlin painting murals in the tavern he was opening in Braddock Heights.

“I was not real big on the idea, as a 1796 tavern would probably not be so ornately adorned. Also, I was on a very limited budget,” he says. But after talking with McLaughlin about her vision for various rooms and spaces, and the price, “It was pretty much an offer I couldn’t refuse.”

Stencils in some areas and murals in others gave each room personality: scenes along the Potomac River in one room, the view from Braddock Mountain in 1796 in another. There were concerns that she could finish her murals before the projected opening date, “but she assured me that she worked very quickly,” he says.

“I would be busy somewhere else in the building and come back an hour later and she would have finished an entire wall! And it was beautiful,” Reinhard says.

“She was such an inspiration. When I was working 16 hours a day, seven days a week, I saw her at 73 years old climbing up and down her ladder, always cheerful, her laughter infectious, and it would give me strength. The priceless, beautiful work she did will hopefully live on for many years. I know I’m a better person for having the good fortune to have known her,” he adds.

The final mural McLaughlin painted was in another tavern, The Blacksburg (Va.) Tavern owned by her nephew, Dan Riley.

Riley remembers visiting Aunt Ginny, as he calls her, at the old house she and her husband, Don, refurbished in Pennsylvania. “Visiting the house in Fairfield got me to be an old house enthusiast,” he says.

So, upon returning to this part of the country after living in California, he decided to buy and restore an old tavern in Blacksburg, which had been slated for demolition. McLaughlin’s sons were again instrumental in her adding considerable talent and inspiration to the project during the summer of 2014.

Family was important to all of them. “At that time, my father had recently passed away and the mural was a way for the family to honor him,” Riley says. “Virginia’s fortitude and positive outlook was so inspiring for any man or woman. She set the bar so high. It’s not fair to try to match that.”