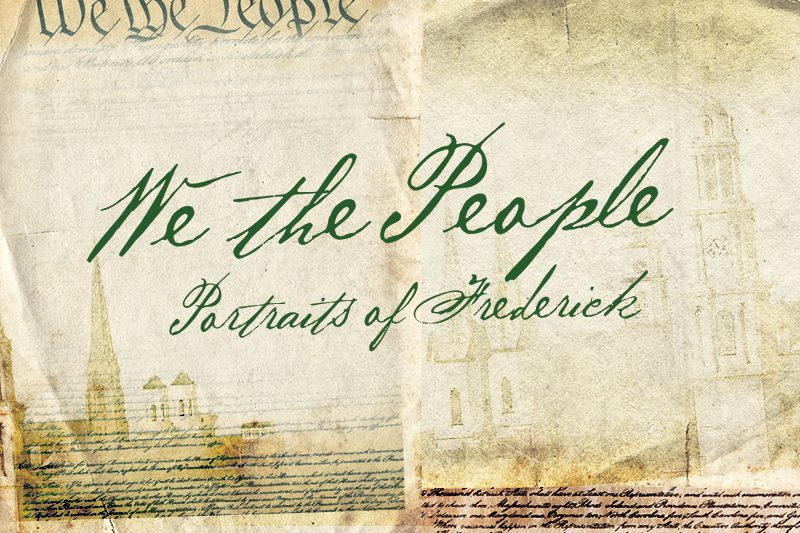 Frederick County has always been a crossroads. Its allure to modern-day visitors and residents is not much different than what captivated the first Native American inhabitants and then European settlers. People have long enjoyed a scenic environment, ample natural resources and fertile land for farming and the production of necessary goods and amenities.

Over time, a continuing influx of people have created and re-created the community. Frederick County today is just the latest version of the accomplishments of countless people, past and present, from varying backgrounds. They have contributed to a social mosaic with their cultures, talents, creativity and spirit.

And the story goes on. Additional chapters continue to be written, its authors including new residents who come from neighboring counties, numerous states and countries from around the globe.

“We the People,” a new exhibit by Heritage Frederick, will celebrate the people who have called Frederick home during its 275-plus years. The exhibit opens next month and will be highlighted by portraits of current residents who moved here from other parts of the world. (For museum hours and other details, visit frederickhistory.org.) On the following pages are some of the faces to be featured. 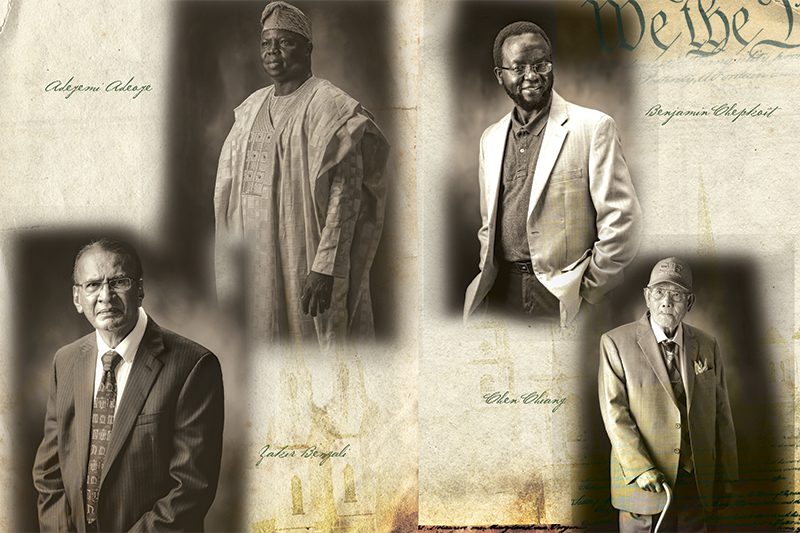 Adeyemi Adeoye was born in Nigeria in 1965 and settled in Frederick in 2001. Yemi worked in the Frederick County Sheriff’s Office Corrections Bureau from 2003 to 2019, attaining the rank of sergeant.

Zakir Bengali was born in Mumbai, India, in 1939. Zakir earned a Ph.D. in biology at the University of Rochester in 1973 and came to Frederick the following year. He retired from the National Institutes of Health in 2006 and served on the Frederick County Board of Education from 2012 to 2016.

Benjamin Chepkoit was born in Kabarnet, Kenya, in 1962. After earning Ph.Ds, he worked in the Washington, D.C., area, California, the Middle East and Kenya. Ben is CEO of his own companies, Optima Business, Shiloh Healthcare and A Caring Place.

Chen Chiang turned 92 in 2020. He left Taiwan, where he worked as a police officer, to join his sister in Maryland. Chen moved to Frederick in 1983 and decided to open his own business, China Garden, to share his passion for Asian cuisine with the community. 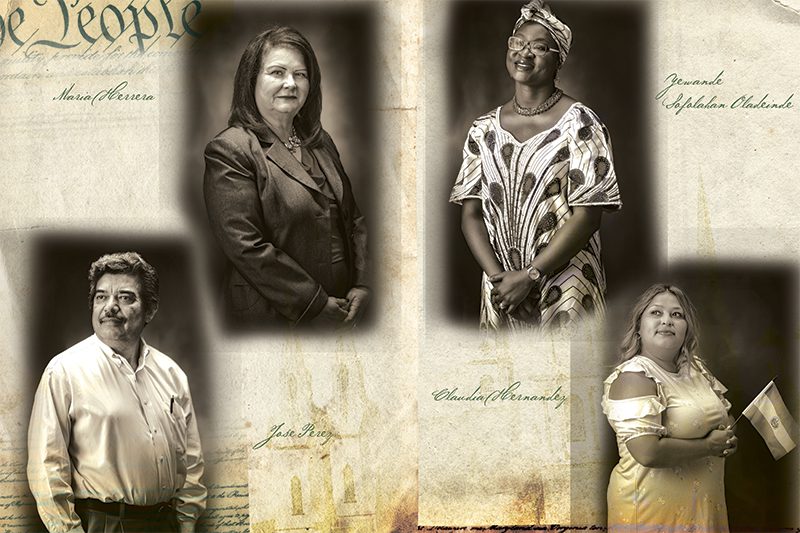 Maria Herrera was born in Havana, Cuba, in 1959. Her father was imprisoned under Castro and released. She came to the United States as a refugee with three changes of clothing. Her father started the Spanish Speaking Community of Maryland nearly 50 years ago. Today, Maria is executive director of the organization.

Jose Perez grew up in El Salvador in a family with 12 children but no running water or electricity. In 1980, at age 18, Jose moved to Washington, D.C. He worked as a dishwasher and learned all aspects of restaurant management. In 1991, Jose and two friends bought the El Mariachi Restaurant in Rockville. They now own restaurants in Virginia, Delaware and Florida. Jose has owned and managed the Mexicali Cantina in Frederick for nearly 20 years. He opened Cacique in 2004.

Yewande Sofolahan Oladeinde was born in Lagos, Nigeria, in 1985. She came to the United States in 2003 to attend East Stroudsburg University. Yewande earned a bachelor’s degree in biology and completed her graduate studies in behavioral health at Penn State University. She is a research analyst for the federal government.

Claudia Hernandez was born in 1987. Her parents and grandparents left El Salvador to escape civil unrest and moved to Thurmont in 2003. Claudia enrolled in Frederick Community College, graduated from the Universities at Shady Grove with a degree in psychology in 2010 and later earned a master’s degree. She is the coordinator of Family Engagement and Partnerships with Frederick County Public Schools and is a licensed therapist in private practice. 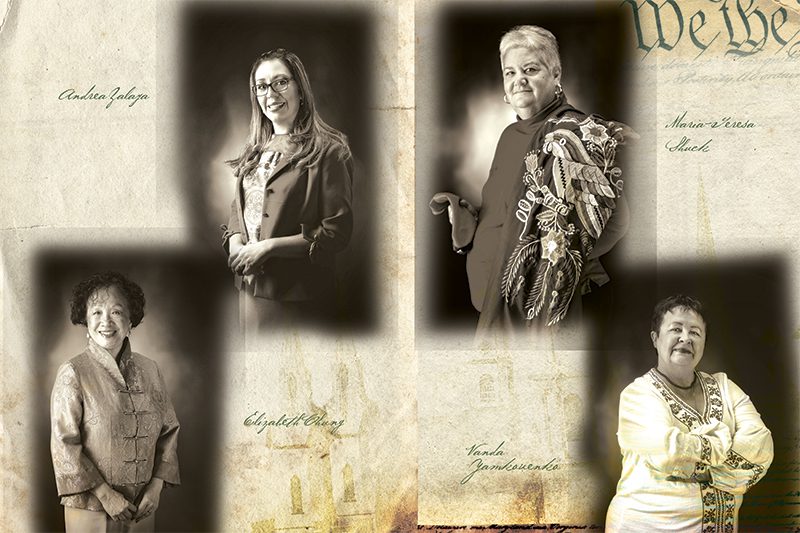 Andrea Zalaya is from El Salvador. Her family was not wealthy, yet she never felt deprived. She experienced civil unrest and believes that made her strong. Andrea came to Frederick to expand her daughter’s opportunities and works at Centro Hispano, helping Spanish-speaking residents with paperwork.

Elizabeth Chung was born in 1950 and is from Hong Kong, now part of China. Her father believed that education was very important. Elizabeth studied public health at the University of Hawaii in Honolulu and gained additional education at Penn State University. She serves as executive director of the Asian American Center and chairs the Maryland Community Health Resources Commission.

Maria-Teresa Shuck was born in the United States but returned to her mother’s native country of Nicaragua in 1967. Both parents worked for American companies, but there was poverty, earthquakes and civil war. At age 18, she and her 10-year-old sister boarded one of the last flights to the U.S. out of Managua. Maria co-founded Centro Hispano in 2006 and is now its Executive Director.

Vanda Yamkovenko was born in Siberia in 1956 but is Ukrainian, her family having been exiled to the Soviet outpost when Stalin was in power. In 2017, she and her husband settled in Frederick. Her husband is an artist and exhibits at the Delaplaine Arts Center. Vanda is employed by the Asian American Center.