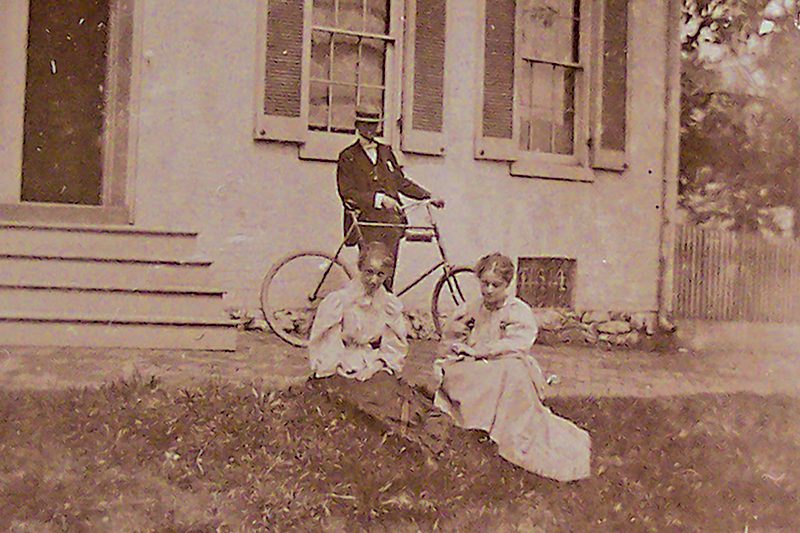 In 1888, 25-year-old Harry Peyton Gorsuch became the secretary and assistant manager of the Catoctin Mountain Iron Company. In this undated photograph, Harry Gorsuch is shown standing with a bicycle outside Catoctin Manor. His wife, Nora, is sitting in the grass with an unknown woman.

Catoctin Furnace was built in 1774 by Thomas Johnson—a delegate to the Continental Congress who would later become governor of Maryland and a Supreme Court justice—along with brothers Baker, James and Robert. In 1887, the Catoctin Mountain Iron Company opened, with a daily output of 30 tons of iron. The Blue Mountain Iron and Steel Company bought the plant in 1899, but the low cost of iron led to its bankruptcy in 1903. This was the last time the iron works were operated, though a mining operation did continue in the area.

Catoctin Manor was built in the 18th century as a home for James Johnson, the first ironmaster and an original co-owner of the furnace. According to archeologist Elizabeth Comer, secretary of the Catoctin Furnace Historical Society, Johnson chose the location on a hill above the furnace and surrounding village so he could “literally look out his bedroom window to see who was working or not working.” The 17-room mansion continued to be home to ironmasters until 1903. You can still visit the site today in Cunningham Falls State Park, though now only the stone walls remain.