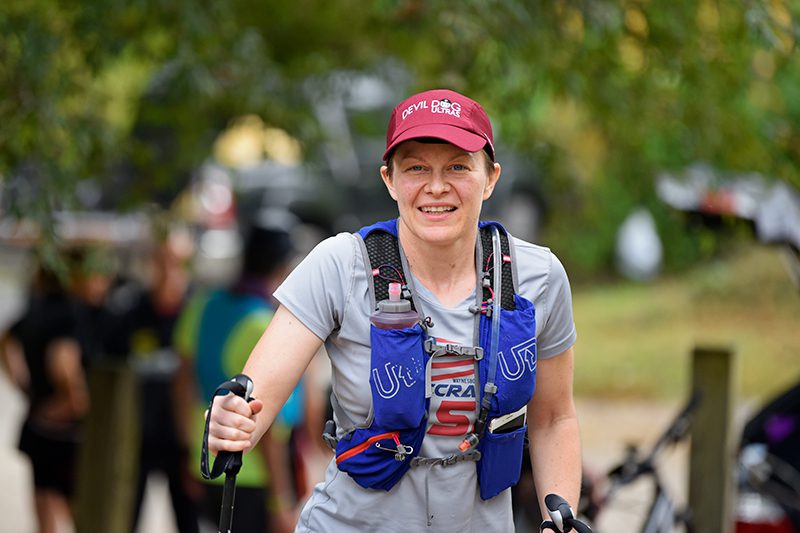 It’s hard to run when you’re crying. “I was literally gasping for air,” recalls Lindsey Weaver. But despite her tears of joy, Weaver pushed through as the finish line came into sight and she became the first woman on record to run the entire length of the C&O Canal—nearly 200 miles from Cumberland to Georgetown in two days, five hours and 39 minutes.

“It was kind of unbelievable,” she says of the run this past September.

Weaver’s journey to that finish line began five years ago. She was athletic growing up, playing soccer and even doing a “little bit of track. But nothing too serious,” she says. As an adult, “I dabbled a bit” in running.

Then she went through a divorce. “I needed something as an outlet,” says the 34-year-old librarian at Middletown High School. “I started running and found it to be very therapeutic. I started out a mile, two, three, four and built up.”

This led to trail running. “When I started with the trail runners we would go out on the weekends and run 13, 14 miles,” says Weaver, who is also a member of the Frederick Steeplechasers running club. “And then we built onto that and we’d run 20 miles.”

However, “Early on, I never thought I would do a marathon. That seemed really long to me,” she says.

Weaver would change her mind. “This group that I ran with, everyone was signing up for this race called North Face 50K. I said, ‘I’m interested.’ They had a marathon distance and a 50K distance.”

She signed up for the marathon. Her fellow runners had other ideas. “My friends were like, well, if you are going to do a marathon you might as well do a 50K,” she says. “It’s just an extra five miles.”

So, Weaver did. She finished. And as her enthusiasm for running and being an ultrarunner grew she sought out more and more challenges. “I’ve done quite a few 50Ks and 50-milers,” she says. “Then I decided to sign up for a 100-miler. After that, I did a 100K.”

She looked out West and a 200-mile run there. “I wanted something more challenging,” she says. “Something that was beyond the 100-mile distance.”

But due to cost and logistics she decided against it and instead she considered lengthier options closer to home and settling on the C&O Canal and its 184.5 miles. Not quite 200, but awfully close. (She would, in fact, run more than that, adding five miles by running to the canal and running off the path for breaks and other stops.)

“I started doing research, and I looked on this site called FKT to find if anybody had done the C&O Canal as a FKT or fastest known time and there was no women’s record,” she says.

There was a men’s record, though. Michael Wardian, an ultrarunner, had run the C&O Canal in 36 hours, 36 minutes and three seconds. Weaver reached out to Wardian for his perspective on running the canal. “She was definitely a person that I thought had done her homework,” he says. “I knew she was serious.”

In the months before her run Weaver’s preparation included strength training and running. Lots and lots of running. “I was doing 50 to 70 miles a week, some weeks would be more,” she says. She also did a test run of 50 miles on a section of the canal. “I just wanted to get time on my feet to see how it would go,” she says.

Of course, she was already a seasoned distance runner. “I’ve been doing this for a couple of years,” says Weaver. “I know how to navigate the ups and downs of being out there for a long time.” 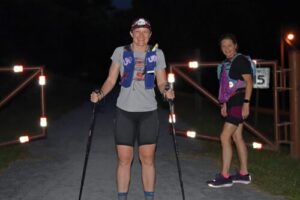 But there was more to the C&O Canal run than just running. “On a race that’s provided for you, there’s aid stations, there’s water, there’s facilities,” says Josh McAlister, her boyfriend and a key member of her support team during the canal run. “All you have to do is start, run and finish. With this, we were supplying and providing all of the aid.”

And McAlister was there every step of the way. “She started off and I got in the car and drove what equates to six or eight miles, sat and waited, filled up the water, gave her whatever snacks or fuel she needed and she kept running,” he says. “And I would drive another six or eight miles and do it over and over again.”

She ran the first 30 miles by herself while listening to an audio book, Living with the Monks by Jesse Itzler. After those initial 30 miles she was joined by fellow runners. “It was a motivating factor for me,” she says. “I knew this person was joining me at this mile, so I couldn’t give up and not meet up with them.”

Weaver would run, then walk. “I did a four-minute run, two-minute walk. Up until the last 20 miles or so,” she says. “I got tired of alternating and decided to just run when I wanted to and walk when I needed to.”

She chose the walking/running pattern because, “I wanted to keep my heart rate down. If you do any strenuous activity and your heart rate is elevated for a long period of time you could easily, what we call in the running world, bonk,” she says.

That, according to Weaver, can result in extreme fatigue, among other issues. “I wanted to avoid that,” she says. “By adding in those walk breaks I was able to keep my heart rate lower and that allowed me to sustain a more consistent pace throughout the entire day.”

Despite such safeguards the run did take a toll on her body. “About 60 miles in, her feet started to get beat up,” says McAlister. His duties then included treating her feet at various stops.

Weaver would end up changing her socks six times and her shoes three times. “Changing socks and shoes helped a lot,” says McAlister. As well as coating her feet with lubricants and powder. “Anything to prevent the friction,” he says.

Discomfort and pain weren’t going to stop Weaver, though. No one knew this better than McAlister. “The only thing that was going to stop her was something out of her control, a catastrophic event,” he says. “She trips and falls and breaks something. She gets struck by lightning. Beyond that, it was just a matter of putting in the work start to finish, and she was doing that every step of the way.”

Determined yes, but Weaver admits that as she got closer and closer to finishing, “I just wanted to be done,” she says. She was going on very little sleep, for one thing. During the two days, she had grabbed only a half dozen quick naps along the way. “My mother was so cute,” she says with a smile. “She made this luxurious bed for me in the back of her car with fluffy blankets.”

And in the midst of her hard-fought effort to carry on, she says she was reassured by those who ran with her and came out to support her. Her running community is dear to her. “I’m closer with these people than I pretty much have ever been with anybody in my life,” she says.

There was even a familiar voice on the phone for her. “It was just to give her some motivation and to check in and say ‘hi’ and wish her well,” runner Wardian says.

Finally, after two days, and mile after mile, there it was. The finish line. “As I got closer and could see Georgetown, I think it became real,” she says.

Since the run, Weaver says it has taken some time for her body to recover. Even so she is considering what’s next. She says she may again think about going out West to run—shorter distances to begin with and then maybe longer ones. “To see how I do,” says Weaver. “Running out West is a lot different than running on the East Coast.”

One thing is for certain, though, no matter how long the distance or where it is, she will continue to embrace her love of running. “I want to be running when I’m 99 years old,” she says.