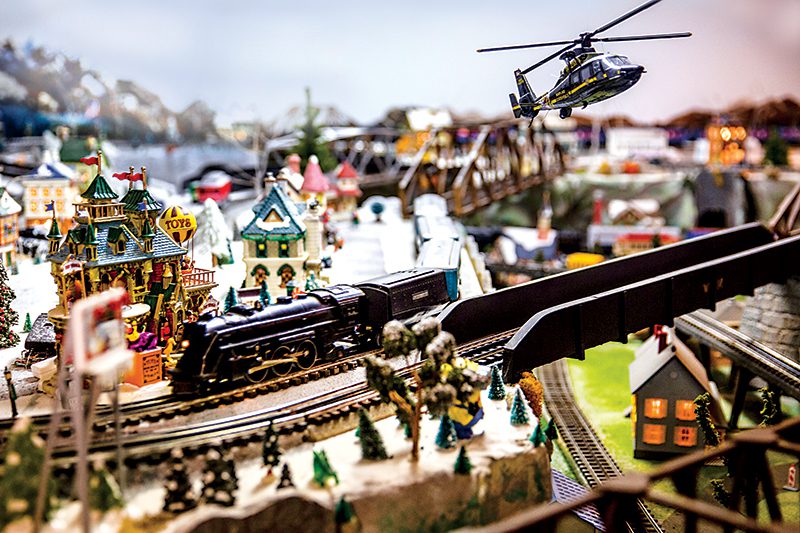 Seventy-two-year-old Kenneth Harrison climbs beneath a section of the sprawling model railroad layout that fills the bottom floor of the Knoxville home he shares with his wife, Mistie. Seconds later, he reappears from an opening cut in the middle of the table, looking like a B-movie giant surrounded by train tracks, tiny buildings and rail cars. A jet aircraft dangles by his head.

On this day Kenneth is attempting to correct an issue with one of his trains—the problem child being a black engine that, when normally functioning, pulls a sleek caravan of sky-blue passenger cars. But, right now, it is doing nothing.

Carefully positioning his body to avoid damaging any part of the layout’s mountain village display, Kenneth reaches the trouble engine and gives it a few pushes. Nothing. He then asks Mistie, standing a few feet away at a caboose-themed command center of transformers that operates all 26 trains and accessories, to hit the engine’s throttle. She presses the lever on a transformer while he again pushes the train.

While Kenneth returns to the troubled train, Mistie talks. “That’s the problem with this getup,” she explains. “Things can go wrong, and it can happen at any time.”

It started more than three decades ago when the Harrisons—both train lovers whose fathers worked on the railroad—started putting work into their personal model layout. Each year it seemed like more train cars were added, more buildings, more details. “It just started growing,” Mistie says.

The railroad grew so much in size and detail that friends and then friends of friends insisted on visiting the Harrison home. They encouraged the couple to let more and more people see the display. So, the Harrisons opened their house during the holidays so the public could see what began as just three trains running. “We had more, but that’s all we had room for. … Then, it just started to snowball.”

As the train layout and visitors grew, the Harrisons had to expand. An addition to their home added 860 square feet to the bottom floor, with trains now running on six custom-built platforms—seven, if you include the small table with the Thomas the Tank train. But despite the expansion, space was still tight, so two trains now travel on a catwalk overhead.

There are freight trains, passenger trains, even a circus train. Want to see a pink engine pulling a row of pastel-colored cars? Here is your place. Most of the trains are standard Lionel gauge in size, but the Harrisons also have many larger, G-scale models, each car big enough to fill a shoebox. (The bigger trains can also run outdoors and the Harrisons keep one loop of track wrapped around a koi pond in front of their home at 3837 South Mountain Road. “We got to do a little bit of work out there because the wind plays havoc with everything,” Mistie says.)

Vintage transformers as big as toasters, only heavier, are each marked with the maximum speed for its corresponding engine. This designation is important, as it was earned through some trial and error. “We shouldn’t have any derailments,” Mistie says.

But the trains are just the headliners in an epic show that also features bridges, tunnels, roads, office buildings, a carnival with a Ferris wheel and a working rollercoaster. The scenes created by the Harrisons take part in all terrain and seasons, including a snow tableau with Santa Claus flying above.

When the entire display is turned on, trains move in all directions, buildings and automobiles glow with lights, and gates open and close. There are train whistles, engine chugging noises and the distinct metal-on-metal clatter created by the wheels rolling on the track. The sound is a noisy, nostalgic trip all by itself.

Welcome to what is now known as Harrisonville: A Model Railroad Town—otherwise known as model train heaven.

Still, the vast space isn’t big enough to showcase the entire Harrison collection. Many trains are mounted on shelves and in display cases, along with old photos and other items of railroad memorabilia. There are also many extra planks of track that could be snapped together in seconds, but there isn’t the room for another loop or even a spur.

IF YOU BUILD IT

Over the years, model train fans from across the country and beyond have made their pilgrimage to the Harrison home, often inspired by stories or internet posts from others who had seen the display. Some visitors come every year and sometimes stay for hours at a time to marvel at the spectacle. Signs out front direct visitors where to park.

Mistie Harrison gets the biggest kick out of the look of amazement on the faces of the first-timers who, despite hearing about the display or even seeing photos, are still taken aback by the size and detail. “I like to be out here when they come in just to see their expressions,” Mistie says.

Part of their joy comes from appreciating the level of detail that went into the small, delicate pieces. There are hand-painted people, small animals and—in a homage to the movie A Christmas Story—a child with his tongue stuck on a flagpole.

Police cars, specifically positioned for its officers to make a bust, feature Maryland State Police and Frederick County Sheriff’s Office logos “Sheriff [Charles] Jenkins was in here. He said, ‘Who set that up?’ And said, ‘I did.’ He looked at me and he said, ‘How did you know how to set that up?’ I said, ‘I better.’ He said, ‘What do you mean?’ I said, ‘I am a retired deputy sheriff and correctional officer from [Prince George’s] County.’”

Posted signs instruct visitors not to touch the displays—a warning that is not just for excited children. “Sometimes the parents are just as bad as the children,” Mistie says with a laugh.

Despite the pandemic, plans are for the Harrisons to open the trains to the public again this month, with limitations. “This year is going to be different, at lot different,” Mistie says pensively. Masks are mandatory, attendance numbers will be closely monitored and hours of operation are being pulled back. (The train display will be open Wednesdays from 5-9 p.m., Thursdays from 5-9 p.m., Fridays from 5-7 p.m. and Saturdays from 11 a.m.-3 p.m. until Jan. 9. The home will be closed to the public on Sunday, Monday and Tuesday.) “We used to be open seven days a week and twice on weekends,” she says. “We did that for 20 years.”

Unlike most home train layouts that are put up only during the holidays, the Harrisons’ mammoth display is permanent and could operate—if needed—all year. But the non-holiday months give them time to check on the trains and accessories. Annual upkeep, which picks up momentum in the fall, has Kenneth working closely with the trains and Mistie maintaining the scenes, often re-painting buildings and characters. “It’s been a labor of love,” Mistie says.

While the Harrisons do not charge admission, they do accept donations to help offset their maintenance and electric costs. (The display requires dedicated 100-amp service.) Visitors also sign a guest book that is filled with names from people who came from as far away as California and Guatemala.

“One time a bunch of guys from Florida, retired railroaders from here, saw our flyer down at the terminal at Union Station. They gave us a call and we told them we open at noon. They came here at 9, 9:30 that morning and didn’t leave here until 10 that night,” Mistie says.

In keeping with the holiday spirit, the Harrisons keep a 4-foot-tall Christmas tree near the visitor entrance to their display—but it’s not just any tree. This one includes railroad-themed ornaments, including a few that have thimble-sized trains that run on tracks around the small globes. Kenneth confirms the tiny transformers on the ornaments actually operate the trains.

“The Christmas tree is the first thing I like to turn on when I come down here because it makes almost as much noise as the trains do,” Mistie says, laughing.

On this day, though, she is concerned about computer problems that are keeping her from creating and printing the signs that promote the display with hours of operation. She puts them up at local stores. That amounts to the only formal marketing of the display.

As for the finicky black engine, the diagnosis is it might need a new transformer, or perhaps something else is the source of the trouble. But Kenneth will get it rolling again.

As if he has a choice.

The annual show is about to begin.