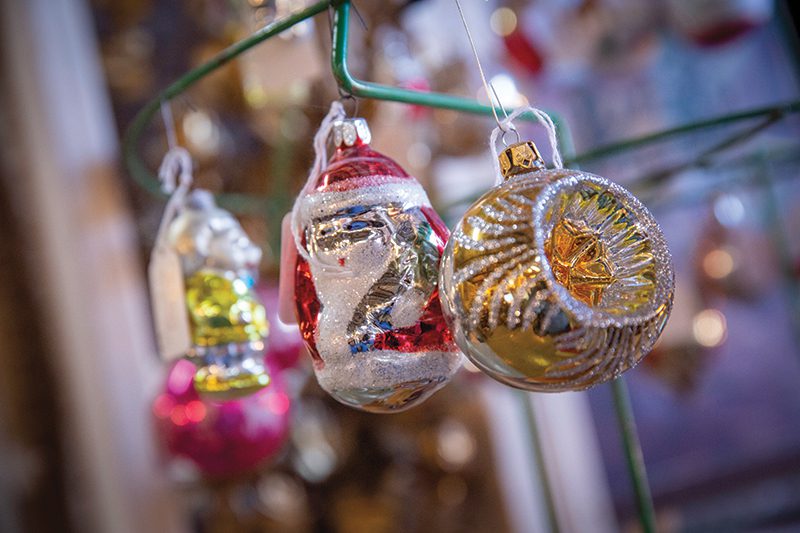 Holidays Past and Present Converge During Decades of Holiday Ornaments

Like almost every other thing in 2020, the holidays this year will be different. Family gatherings will be smaller, and many people might skip them entirely. Some get-togethers will move to Zoom, with holiday tables and gift exchanges becoming less populated.

The Christmas memories this year might not be the ones we make, but rather the ones we’ve kept and held in our hearts for years. In a time of great disruption, a glance back can be enriching, rewarding and meaningful.

So, maybe this is the time to relive happy memories and take note of holidays past, including vintage Christmas tree ornaments and the stories they tell about people and holidays. Each one is a treasure handed down from one generation to the next, and each has a history and story.

Think of them as tiny time capsules, shards of the past that reflect some detail of years, decades and holidays long ago. Now is the time to share the history and stories connected with them.

Trees will undoubtedly still be trimmed, and with that very act we’ll hold in our hands the memories of former Christmases that ornaments collected through the years invariably produce, becoming treasures that tug at heartstrings and add warmth to the glow of the season.

Antique and vintage Christmas tree ornaments hold memories of all kinds—times and people long past, influenced by society’s trends of that time and place. Looking back at these keepsakes doesn’t only spark memories, but it can also offer a glimpse of (and connection to) times and people of which we have no memory.

In the early 1940s during World War II, rationing led to cardboard tops and string replacing metal tops and hooks on Christmas tree ornaments. Everything was scaled back. Food was rationed, so even Christmas baking was minimal. Manufacturing was concentrated on the war effort, so “extras” like Christmas decorations were few and far between. The glass ornaments that were made then are easily recognizable today as being from the WWII era by their non-metal components. That included silver, which was used in non-war times to give ornaments a festive shimmer. But there were no sparkly ornaments then, just clear glass colored in red and green, blue and yellow.

But that would change.

With the advent of a new decade and economic revival in the 1950s, the world’s focus changed. Prosperity was on the upswing and our gaze into the future was aimed at the stars. The space race was beginning to blast off. Paying homage to all things space-related, Christmas tree ornaments of the era began to look like spaceships, satellites and stylized stars. Colors gave way to metallic finishes and shapes took on a whole new profile.

It was also about this time that Christmas trees started to look out of this world—shiny metal artificial trees fabricated in sections, to be assembled on site. When strung with lights and adorned with space-age ornaments, it was the quintessential retro-Christmas look.

Glow-in-the-dark ornaments became popular in the ’50s and ’60s at about the time the numerals on watch faces and clock dials were painted with phosphorescence as a styling detail related to the emergence of the economy from its bleak WWII era. After being exposed to light, the (usually radium or tritium) paint glowed for varying lengths of time, not more than just several minutes.

Some of the more popular shapes for these hot new ornaments were icicles, and if there were enough of them on the tree, the whole thing glowed, but not until all the other lights were turned off. That was the fun part. After the holiday lights and other room lights were turned off, the tree still glowed!

This same era gave us the emergence of bubble lights, which were hands-down the most fun and eagerly anticipated addition to the tree. They were usually placed around the lowest branches, but they were metaphorically the frosting on top. Anyone old enough to remember them also recalls the wait to see which light bubbled first! None of them ever bubbled at the same time because the liquid in the candle-shape tube had to be sufficiently warmed by the electric light at the bottom.

Today’s reproduction version of the iconic vintage bubble lights doesn’t hold a candle—pun intended—to the older, bigger ones with more interesting color combinations. If you find an original set still in working order, it’s a treasure.

Glass beads, originally introduced in the early 20th century, enjoyed a surge in popularity in the 1950s. Silvered and colored glass beads were strung as garland around the tree, probably as an updated homage to the homespun tradition decades earlier of stringing popcorn and cranberries for tree garland.

The traditional Christmas color combo of red and green took a decidedly groovy turn for several years following the fashion trend to hot pink and citrus green in the early ’60s. Holiday cards, tree ornaments and even the trees themselves reflected this new outlook on holiday color themes. This was also about the time that painted and flocked real trees became a trendy holiday fashion.

The traditional angel or star on the top of the tree were frequently replaced by glass tree-toppers that remained popular for decades, from the 1940s through the ’70s. Some were simply silver and others included colored glass, but most were festooned with added tinsel. Their glitter and glow represented the optimism of the post-WWII times. Even the stars and angel figurines that found their way atop the tree were often embellished with glittery materials.

By the 1980s, as technology increasingly became a part of daily lives, electric light and movement crept into tree ornaments as well. It was no longer enough for an ornament to just hang there and be pretty; they now had to do something. Many of these ornaments not only had moving parts, but lighted up as well. Not surprisingly, kids of all ages were charmed by them.

Other memory-provoking Christmas trims can be found in some of Frederick’s antiques shops. You might find:

• Icicles, sometimes known as tinsel, are strands of metal (lead) that were carefully put on the branches of the tree, one by one, to mimic icicles on a tree in the woods. Popular in the ‘50s and ‘60s, the newer versions are plastic rather than metal.

• Spun glass “angel hair” (yes, glass) was used to mimic snow or create a halo of light around a tree topper base.

• Little cardboard houses and churches, some with tree lights, can stage village snow scenes on mantels or tabletops accented with bottle brush trees.

The old saying goes, “Memories are souvenirs that time turns into treasures.” It applies to many days throughout the year, but none fits it as perfectly as Christmas. This could be the year that reliving old memories to blend with current ones will spark a new holiday tradition to treasure.