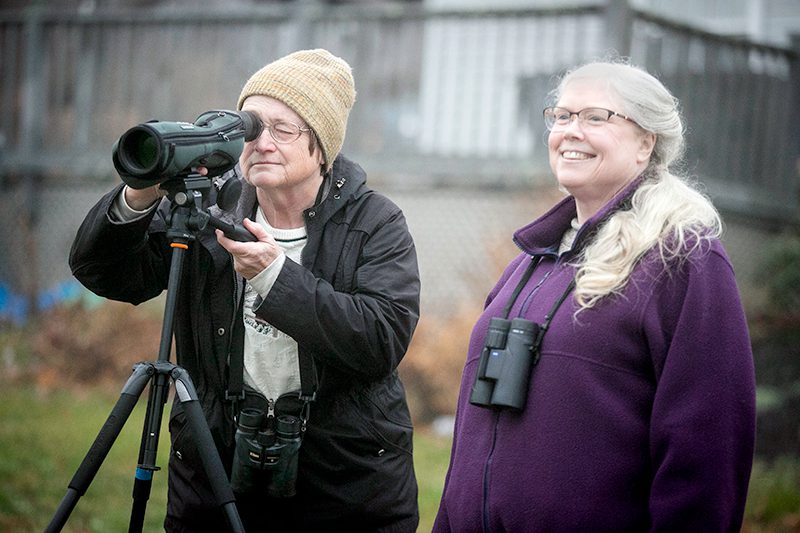 If you know a birder, you know how passionate the birding community is about counting feathered critters—following trends and the seasonality of birds in migration. Some people climb mountains, others count birds.

Early a foggy December morning, I find myself in the car with two birders from the Frederick Bird Club. It is the day of the Great Christmas Bird Count in Frederick County. Linda Faulkner and Bonnie Borsa are my guides and I have never seen such excitement on such a miserable weather day.

There are no rules about where the birds are spotted, as long as they are in your assigned area and are tallied within the 24-hour period of the official count. We are assigned to a northern section of the county, but our day starts at Faulkner’s home bird paradise. Here, she has feeders, excellent perches and hiding places for all kinds of birds.

White-throated sparrows, a prolific bird in winter, flit between bushes and the feeders while we watch. Flickers, goldfinches, song sparrows and many others fly between the forest edge and the feeders for their morning meal. Borsa notes the “yippee” sound that the house sparrow makes; I will never forget how to identify them with that call. At least 14 species visit the feeders before we set off for the day.

The Great Christmas Bird Count is now 120 years old, beginning in 1900 by Frank Chapman, an ornithologist and officer of the Audubon Society, to encourage counting birds rather than hunting them over the Christmas holiday. It has become a tradition for birders all over the world and one of several major bird-counting efforts throughout the year.

Volunteer birders have been major contributors to the data collection efforts. Over the last 120 years, trends are showing significant losses of many species and increases in only a few, like the house sparrow. Not native to North America, house sparrows have expanded their range, taking over habitat and food sources that native birds might otherwise use. In fact, these birds were purposely released into North America, along with European starlings. Sparrows were introduced in the 1800s to establish something familiar for European immigrants. Starlings, among other invasive birds, were purposely brought to the United States as an effort by Eugene Schieffelin to introduce all the birds in Shakespeare’s plays. Many of the invasives that Schieffelin released died off, but the starlings are general feeders and not picky about habitat so they thrived. The impact of invasive species wasn’t known in the 1800s, much less how native species might be affected.

Habitat is the key to the shifts in bird population. Development pressures, pesticides and changes in farming techniques are all contributing factors. Birds in grasslands have seen the biggest declines.

Birds significantly benefit from federal, state and local conservation areas that specifically preserve habitat, says Kathy Brown, another member of the Frederick Bird Club. “We need to keep protections for lands leading to the Chesapeake Bay,” she says. The decline in chickadee and titmouse populations has been dramatic. The main theory is that climate change is shifting the timing of the caterpillar emergence, the bird’s main food source.

Chickadee and titmouse populations aren’t the only ones being affected. Recent data published in Audubon Magazine indicated that nearly two-thirds of North American bird species that were studied are vulnerable to extinction due to changes in precipitation, temperature, wind and even fires. Key to this research was the use of Christmas Bird Count results and other forms of “citizen science.”

My interest in this topic was triggered by an alarming observation on my own land in Frederick. There were days that I would hear no bird calls in my forest. Only 15 years ago, it was noisy with chirps, hoots, screeches and songs. Despite my efforts to increase habitat with berry bushes, leaving the autumn leaf litter intact for bugs and leaving down trees alone, I see many fewer birds than I did just a few years ago. Though I may never be as good at bird identification as anyone in the Frederick Bird Club and haven’t tallied during an official count, I can still sense the changes. The citizen birders of the club have precise rules to follow for data collection, which is why their efforts are so valuable for the official count.

Birders enter the hobby in different ways. Some are weekend birders, some find it a fun retirement hobby. Faulkner is one of the few that got into birding as a kid. “I identified birds with field guides I got at the library,” she says. “Then, I volunteered at a state park in Ohio. I just moved here two years ago.” The birds might be slightly different here than they were in Ohio, but the foundation is already there and it’s clear she’s found a home with Maryland birders.

Admittedly, I was lost without Faulkner and Borsa’s help. I know very few birds by sight and even fewer by calls. Chickadees, crows and hairy woodpeckers were all sighted in the beginning. Then we stopped at Catoctin Mountain Park. With all the forest cover, I was excited to see more birds. But it was quiet. One cardinal and one chickadee were all that we heard. Faulkner says it was “a disturbing silence,” and it reminded me of the lack of birds in my own forest.

“On a good day in December we maybe see 40 species. Last year we saw 22 in this sector,” says Borsa. Everyone in all eight sectors of Frederick County tally their birds on the same day, in the same foggy mess we are in. Despite the fog, we are still able to spot and hear 21 species, by my count, just in the morning.

One thing is clear: Birders provide invaluable information to the larger climate picture. And their enthusiasm is infectious. Armed with notebooks, binoculars and field guides, they count and track birds that live in the county and those that are just passing through. They know when birds should be in a certain location and they get concerned when the birds show up too early or too late.

The Frederick Bird Club, a chapter of Maryland Ornithological Society, welcomes newcomers to its monthly meetings, on field trips and to take part in any of several official counts every year. On Oct. 10, the club held a friendly competition with the Audubon Society of Central Maryland for the Big Sit, where the groups tally as many birds as possible from a 17-foot diameter circle over 24 hours. The Frederick Bird Club counted 48 and the Audubon Society counted 54 species that day.

The COVID-19 pandemic has led many folks to get more involved in birding. Logins to the eBird website and sales for bird books and equipment are on the rise. If you want to join the fun and meet fellow bird lovers, the Frederick Bird Club meets virtually on the first Thursday of the month. Check out the Maryland Ornithological Society at mdbirds.org to find resources and join the Frederick Bird Club chapter.