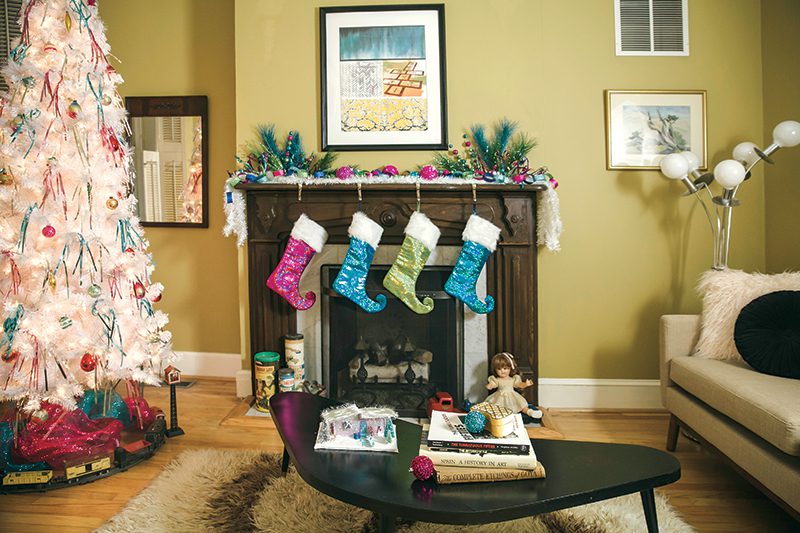 The potent grip of nostalgia probably takes its firmest hold during the holiday season, when we naturally recall past celebrations from our childhoods and maybe think of shiny tinsel layered on trees, technicolor decorations or lights bright enough to be seen from blocks away.

It is only natural, then, that when many people decorate their homes this time of the year, they select a look and feel that takes them back to another era.

When Meg and John Menke were approached to put their home on Celebrate Frederick’s Candlelight House Tour last year, they cautioned that because it was only a part-time residence, it wasn’t as dynamically decorated as the typical tour house. No worries, said the tour’s planning committee, which offered to have the home staged and decorated by local professionals.

Let’s do it, the Menkes replied. So began the transformation of their early-1900s Victorian-style rowhouse into a 1950s and 1960s-era holiday home.

The proposal to empty the East 3rd Street house and stage it for the annual tour was unusual. In fact, planning committee members couldn’t recall ever refurnishing a home before. While the occasional piece of furniture might be moved to improve access for tourgoers, furnishings in the eight houses open for the weekend event belong to and are arranged by the owners. The Menkes said yes to something far more ambitious.

To kick off the project, Mindy Cawley, owner of Vintage MC, and Heather O’Connell of Heather Lynn Interiors consulted with the homeowners to discuss ideas and seek approvals. A collaboration quickly developed, and a decision was reached to keep John Menke’s old bicycle in the front yard, where it’s been the featured decoration for many Christmases.

The work began. Out (slowly and carefully) went the couple’s massive and oh-so-comfortable sectional sofa. Gone were the kitchen table and chairs, John Menke’s computer, even the rugs. Over the course of a few days before the tour, the first level’s three rooms were cleared of all their contents except the owners’ artwork. The Menkes found themselves spending a bit more time on the second floor or at their Barnesville farm. And the two designers had a blank slate.

Cawley, who has parlayed her passion for mid-century modern furniture into a growing business, could easily envision the style in the circa-1905 house. She felt its clean lines and scaled-down footprint would be a good fit for the relatively small rooms.

For the living room, she chose an American-made “boomerang” coffee table and matching end table, both in walnut, complemented with an atomic chair and mid-century-inspired sofa from West Elm. Cawley points out that the slim, finely turned legs add “visual air” underneath while the pieces’ overall simplicity doesn’t “occupy as much visual space” as many types of furniture. The characteristically sleek, richly finished teak, rosewood and walnut woods supplied warmth.

Cawley restored the Menkes’ middle room—where the mammoth sectional normally resides—to its intended use as a dining room. “It just seemed like the right thing to do. I could envision a family gathering for Christmas and sitting down together for a meal,” she says. She set the scene with a 1960s Danish teak table and sideboard, rosewood chairs with white wool seat covers, and place settings composed of pinecone china and Currier and Ives glassware embellished with holiday scenes.

The final room was a kitchen/eating area combination that opens to a view of the backyard.  While John Menke’s antique toasters remained on display, Cawley replaced the couple’s table and chairs with a pair of chic Carter Brothers scoop chairs crafted of heat-molded, bent plywood and covered in vinyl. With a roll-top cocktail bar and an iconic Libbey frosted leaf cocktail set at the ready, the scene suggested the perfect spot to sip a whiskey sour or egg nog.

Of course, it wouldn’t have been Christmas without all the trimmings. That part of the staging partnership was O’Connell’s. Admittedly a novice in the mid-century modern realm, she did her due diligence—researching online, scouting area stores, identifying sources, conferring with Cawley and ultimately creating an inspiration board that proved to be the catalyst for her design concepts.

One of the beauties of mid-century modern holiday decorating, O’Connell says, is its minimalism. In other words, you don’t need a lot to make a statement, but what you do use should be strategically positioned, bright, sharp-lined and jewel-toned—and all of it amped up with a generous dose of shimmer and shine.

“Color is everything,” she says about the era. No red berries or evergreens for this decorating job. Heather stayed with a palette of metallics and vivid shades of pink, teal, lime green, turquoise and even orange throughout the house. She also stayed on budget by shopping Facebook Marketplace, Amazon and craft stores, and by employing her do-it-yourself skills, using her color scheme to guide her choices.

O’Connell had the fun of trimming four faux trees of varying sizes and colors. A white tinsel tree took center stage in the living room. Ornaments, purposely few but unfailingly shiny, were tied to the branches with colorful tinsel. Rolls of wide glittery mesh ribbon and a vintage toy train provided by Meg Menke circled the base.

O’Connell embellished the living room’s fireplace mantel with shimmering baubles, a paper chain (just like you made as a child but this time in unexpected retro colors) and whimsical sequined stockings with curled elf toes. Meg Menke placed toys of yesteryear on the hearth.  One of the era’s most popular accessories, a cardboard Putz house made by local artist Lea Craigie-Marshall, topped the coffee table. A classic Emerson turn table was centrally located in the stair hall.

A stunning pink tree contributed by a friend of the Menkes was swathed in ribbon and given pride of place in the dining room. Otherwise, O’Connell kept things uncomplicated and inexpensive, filling bowls with baubles and tinsel and dressing up the sideboard with a curated collection of glass finials and white garland.

During the first weekend of December 2019, some 1,800 people toured the house that Meg and John Menke own and Mindy Cawley and Heather O’Connell transformed for the occasion. It was a major hit.

On the day the movers were scheduled to move mid-century furniture and accessories out and the owners’ possessions back in, it rained. A lot. It also rained the next day and then day after that. When the deluge finally abated and the mud began to dry, everything was safely returned to its proper place. The Menkes relaxed on their gigantic sofa. And that treasured antique bicycle rested against the front porch rail, just as it had every Christmas for the past five years.

Indeed, there’s no place like home, especially for the holidays.